15 Most Haunted Places in America

If you're looking for a good ghost story, you're in the right place.

If you're thinking about taking a road trip across America and have a soft spot for spooky stories, consider visiting some of the haunted locales on this list.

Some, like the house that inspired The Exorcist, are famous; others, like Bachelor's Grove, aren't as well known. But all of their stories are sure to send a shiver up your spine. So read on, and happy ghost hunting! And wherever your next trip is, be sure you know the 35 Airport Secrets Only Insiders Know.

Lying just outside of downtown San Jose is an extravagant Victorian mansion that's set to be the inspiration for an upcoming horror film starring Helen Mirren. What makes the mansion so unique is the variety of mysterious features—doors that open to 12-foot drops, staircases that disappear into ceilings—personally installed by its owner, Sarah Winchester.

The heiress to a rifle fortune, Sarah's family was plagued by a series of tragic deaths, including those of her daughter and husband. One day, a spiritualist told her that the deaths of her loved ones were retribution for all of those killed by the Winchester rifle, and that the only way to escape these evil ghosts was to build a sprawling mansion with a series of insane booby traps…forever. And if that's too spooky for you, consider one of these 10 Stunning American Resorts Under $150-per-night. In the city of Atchinson, Kansas, only a few block away from the birthplace of Amelia Earhart, there is a house that looks like a pretty standard suburban home—apart from the fact that it's super haunted due to the the untimely death of a little girl named Sallie at the turn of the century.

When the house was rented out in 1993, a couple living there started reporting strange occurrences: the light in the nursery would turn on by itself, the stuffed animals in the room would be found neatly arranged in a circle, random fires erupted, and the husband began discovering odd scratches on his body. The house is now an attraction where ghost hunters often spend the night and report paranormal activity, and psychics have supposedly confirmed that the house is indeed haunted by the ghost of the little girl. 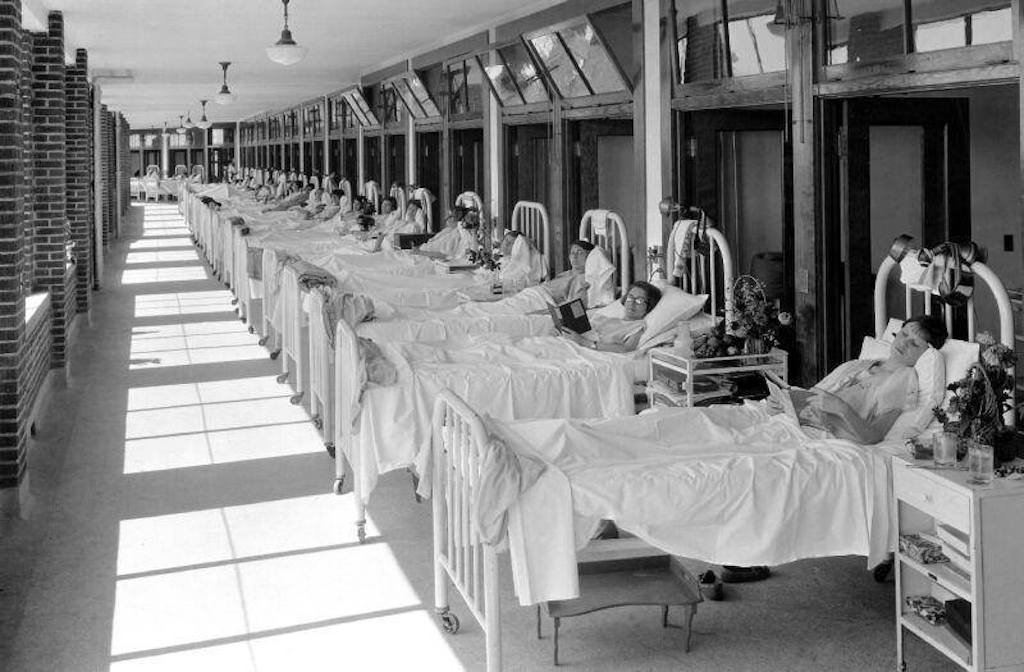 Located in Louisville, Kentucky, the Waverly Hills Sanatorium was a tuberculosis hospital at the turn of the century, where anywhere between 8,000 and 63,000 people suffered long, excruciating deaths from what was then an incurable disease.

Some of the most famous parts of the hospital, which was closed in 1961 and is now a tourist attraction, is a chute where the bodies of the dead would be dropped into a tunnel that led to nearby railroad tracks, and Room 502, where two of the nurses killed themselves. If that's too grotesque for your tastes, we get it: Just opt for one of these Amazing Winter Weekend Escapes.

In 1829, a prison opened in Philadelphia, Pennsylvania, with the intention of using extreme solitary confinement in order to instill penitence in criminals. Prisoners lived alone, exercised alone; and when they were taken outside for one hour a day, they had to wear hoods over their heads. Even contact with the guards was limited.

Unsurprisingly, the treatment drove them mad, and the prison closed in 1970, somewhat ironically, due to overcrowding. The prisoners now holds events and ghost tours, where visitors report some seriously shadowy figures, cackling in empty cells, and generally creepy vibes.

Made famous by Stanley Kubrick's masterpiece, The Shining, the 142-room Colonial Revival hotel in Estes Park, Colorado, is a perfect example of a haunted location whose elegant opulence is juxtaposed by its chilling past. Since it was opened in 1909, it has been the setting of strange events: flickering lights and the sound of children laughing and running through empty halls, which legend has it Stephen King personally experienced when he spent a night at the hotel in 1973 in room 217.ae0fcc31ae342fd3a1346ebb1f342fcb

Today, the mountain resort still functions as a lavish hotel, where The Shining plays on loop on the televisions in all the rooms. And for more onscreen-inspired vacations, take a tour of The World's First Game of Thrones-Themed Hotel.

Set on a bustling street in San Diego is a gorgeous Greek revival style residence built in 1857 by a successful businessman named Thomas Whaley. The family was plagued by a number of unfortunate events: their son, Thomas Whaley, Jr., died of Scarlet fever when he was only 18 months old. Their daughter, Violet Eloise, married a con artist who quickly abandoned her; the subsequent humiliation and scorn she received caused her to shoot herself in the chest with her father's gun at the age of 22.

When his eldest son, Francis, took over the house, he lost his 8-year-old daughter, Anna, and died a year later himself. The succession of deaths has led it to frequently be called "the most haunted house in America," and visitors on its ghost tours have reported infant cries and ghost sightings of the unlucky family. 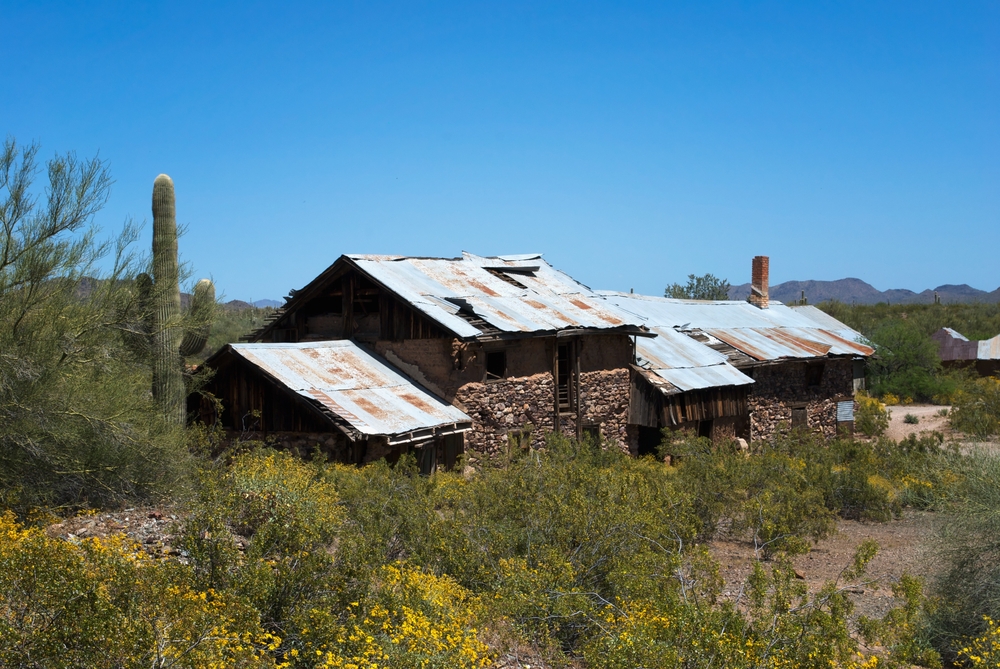 Back in the 1860s, the Vulture Mine in the desert settlement of Maricopa County, Arizona, was one of the most prosperous gold and silver mines in American history, so lucrative that it created its own town, Wickenburg. When the gold ran out, and the onset of World War II shut it down, Wickenburg became a ghost town. As much prosperity as it once fostered, the mine was also the site of a lot of suffering and some pretty grisly deaths, so now the abandoned area is said to be haunted by the people who never made it out. 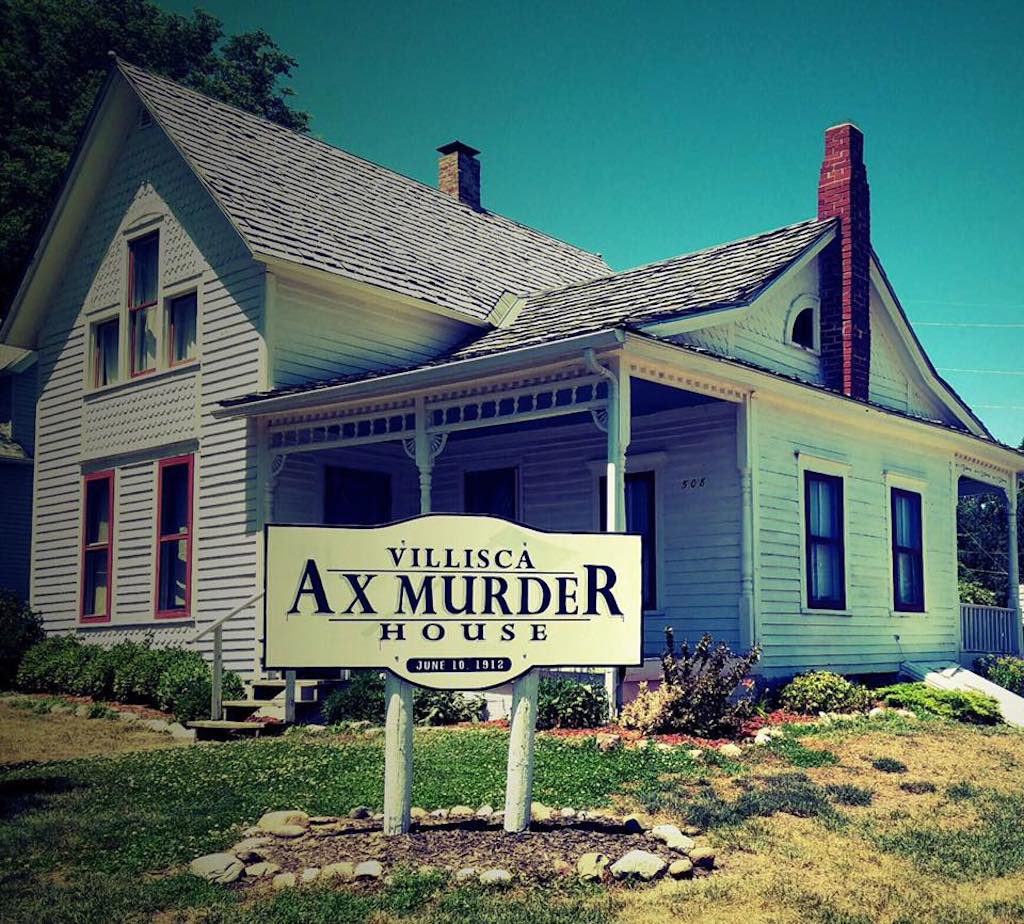 On June 9, 1912, two adults and six children were founded brutally murdered by axe in their beds in the small town of Villisca, Iowa. The grisly murder shocked locals, but in spite all of the press and efforts of local police, the murderer was never found, and the case remained unsolved.  Today, paranormal activity aficionados can visit the house for a tour during the day, or, for $75 stay the night. But, be warned that the house is rumored to be haunted by the ghosts of the Moore Family, angry that their brutal killer was never brought to justice. And for more crazy stories, check out the 30 Craziest Predictions about the Future Experts Say Are Going to Happen. 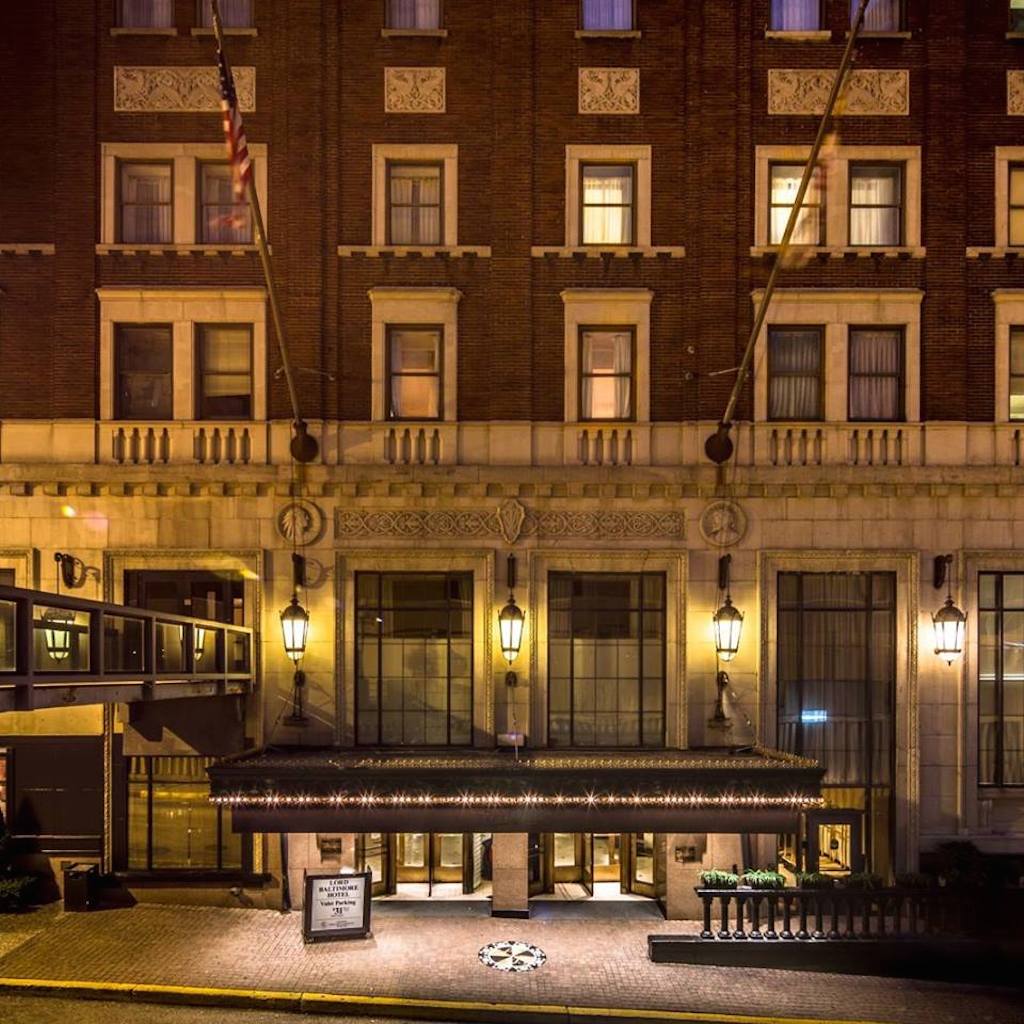 Today, the Lord Baltimore hotel in downtown Maryland, offers modern amenities in luxury art decor lodgings, with a little bit of haunting on the side for enthusiasts. In 1928, this is where a couple and their little daughter reportedly jumped to their deaths following a grand party. Some say the little girl, Molly, didn't mean to jump, but accidentally leapt over the side of the building while chasing her red ball. Today, guests report of strange activity on the 19th floor: an elevator that goes up and down of its own accord, and sightings of a little girl wearing a long dress and black shoes, sadly bouncing a red ball… 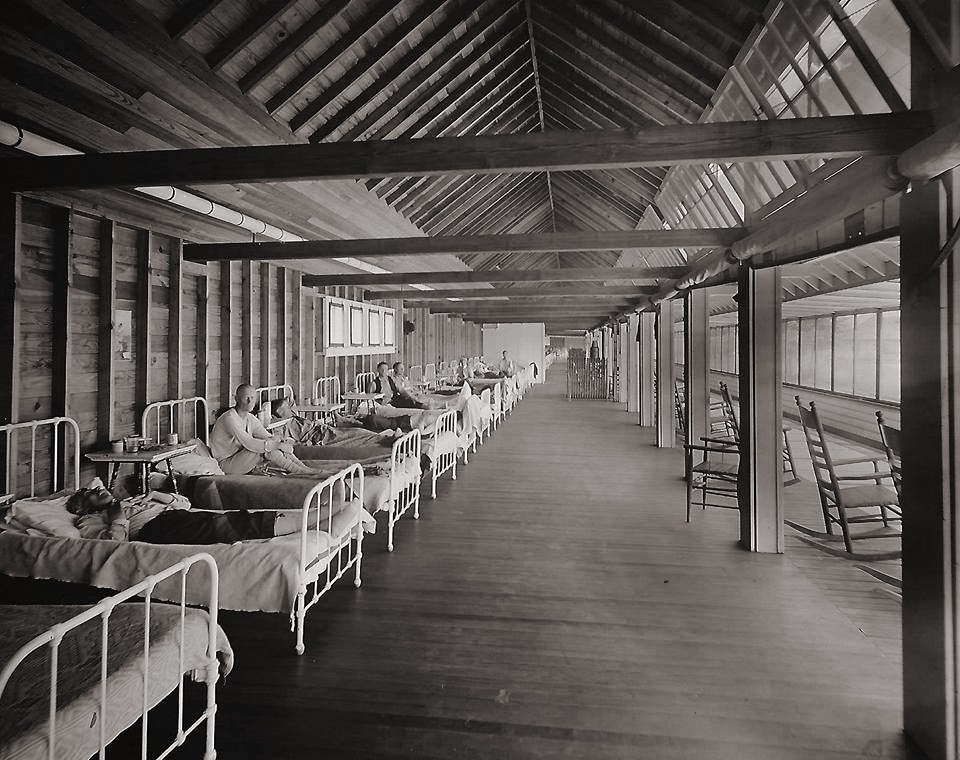 In its heydey in the 1920s, this psychiatric complex in Westland, Michigan, was like a micro-city, with an on-site bakery, police department, and slaughterhouse serving 10,000 of the mentally ill at a time. It was rumored to be the site of an enormous amount of suffering, thanks to treatments like shock therapy and electrocution that were more akin to torture, as well as reports of abuse and unsanitary conditions. After the hospital was closed in the early 1900s, scavengers said that they discovered jars filled with human body parts, suggesting some of the patients might have been used for scientific experiments. Reportedly haunted, it became the inspiration for a 2017 horror film called "Eloise." 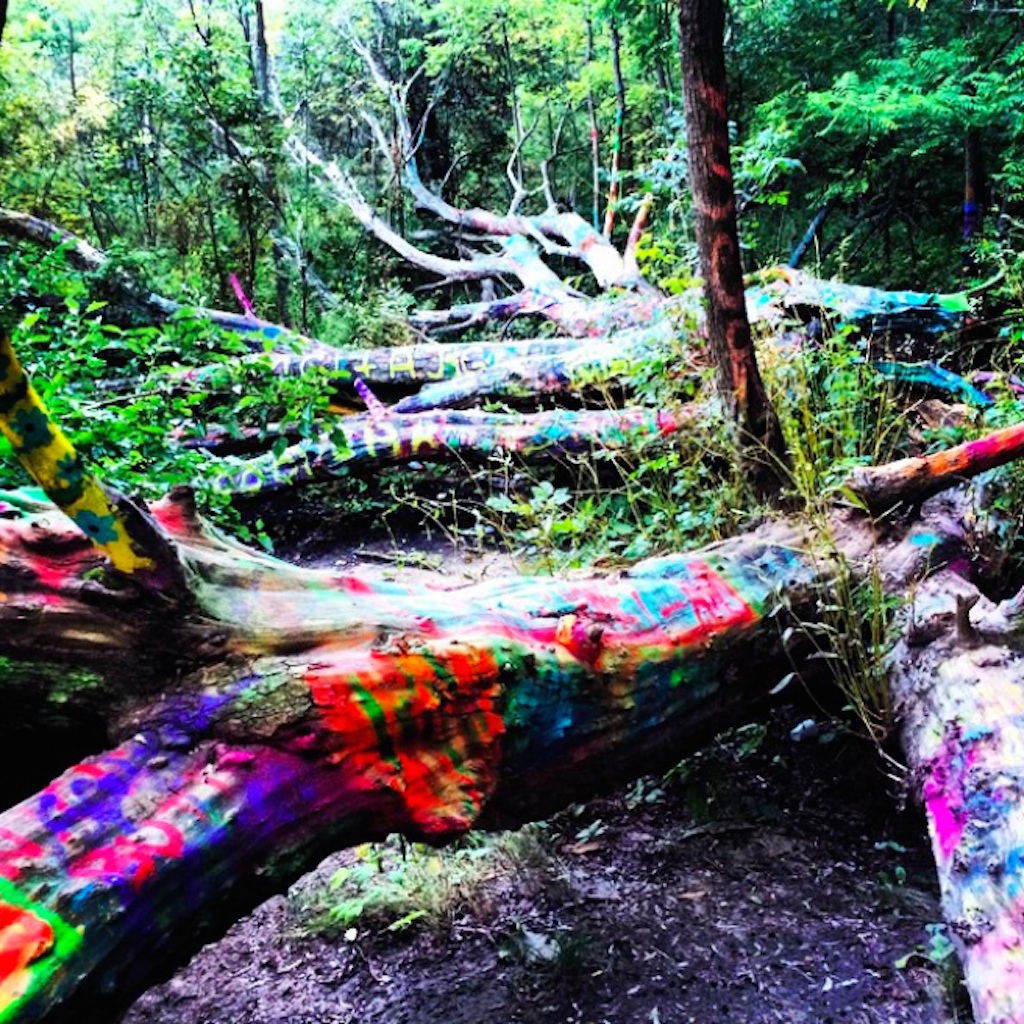 In the woods outside of Traverse City, Michigan, there is an sprawling old willow whose heart has long since died, but whose gnarled branches still snake along the ground instead of extending up toward the sky. Known as The Hippie Tree, it has been spray painted with colorful symbols for peace and love, as it's close to a former asylum that was once known for rehabilitating its patients with nature and kindness in an age of lobotomies. It is, however, also rumored that if one walked around it in a full circle, the portal to Hades would reveal itself under its tangled roots.

You'd never believe, looking at the charming three-bedroom colonial home in a suburban part of St. Louis, Missouri, that you were standing before one of the spookiest places in the world.

In 1949, this classic house on 8435 Roanoke Dr was allegedly the site of an intense case of demonic possession. The victim was a 13-year-old boy who was given the pseudonym Roland Doe. Although the exorcism itself took place at Saint Louis University, all of the paranormal activity that inspired William Peter Blatty's best-selling novel The Exorcist, and the eponymous horror classic, happened at this house. Despite its spooky past, the house routinely goes up for sale, though its owners tend to come and go rather quickly. 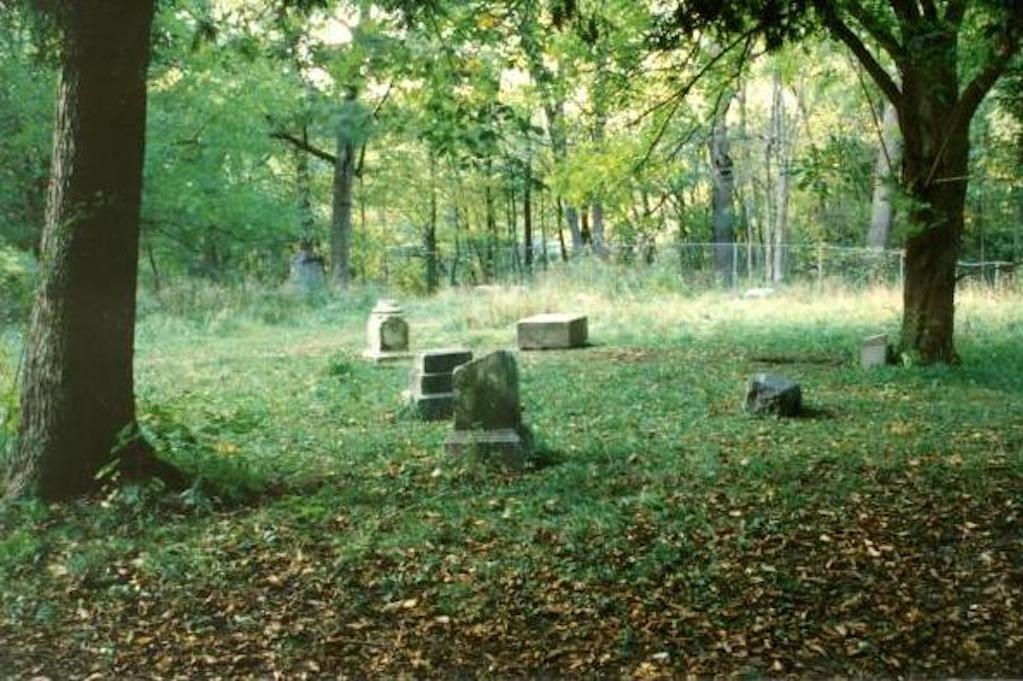 You would assume that, for obvious reasons, pretty much every cemetery is more or less haunted. But Bachelor's Grove Cemetery in Cook County, Illinois, is known for being one of the most haunted places in the world due to its terrifying sightings. Back in the 1930s, it's rumored to have been the dumping ground of gangsters.

Today, there have been reports of a "white lady" who wanders the grounds carrying an infant during a full moon, a farmhouse that shimmers before disappearing, phantom vehicles, and a ghostly woman idly sitting on tombstone, among others.

Standing at 92 Second Street in the city of Fall River, Massachusetts is a dark green Greek Revival house where, in 1892, Lizzie Borden allegedly butchered her parents with an axe as they took their afternoon naps. Following a highly publicized trial, she was charged with the murders, only to be acquitted due to inconclusive evidence. Today, the murder site functions as a quaint little bed and breakfast that offers psychic readings, reenactments of the murder, and complimentary wifi.

Diana Bruk
Diana is a senior editor who writes about sex and relationships, modern dating trends, and health and wellness. Read more
Filed Under
Vacation
Read This Next
Latest News
Read This Next