We're all guilty of a little romantic nostalgia now and then.

It's nice to pretend that every breakup is a clean break. The reality, of course, is often not the case. As anyone who's been through the ordeal can attest, it's an ordeal full of late-night texts, random crying sessions, and wandering wistful thoughts. Your partner, much as you'd like to believe the contrary, is no exception.

So, if your intuition lately is telling you that something just isn't right with your partner—that her attitude towards her ex is far from normal—then, chances are, you're probably on to something. So, rather than attempting to dismiss your insecurities about the relationship, it's time face your fears and confront her about her actions—that is, after you've thoroughly analyzed the subtle signs that tell you that she just isn't over her ex at all.

1
She isn't responsive to your affection. When your girlfriend is still thinking about her ex, she won't be open to receiving affection from anyone else. According to Grant Brenner, a psychiatrist and co-author of Relationship Sanity: Creating and Maintaining Healthy Relationships, she can even feel like being close to you, emotionally and physically, is akin to cheating on her ex. "While there may be other reasons for this, when your partner is pining for their ex, they are likely to be less interested in intimacy with you. They may even feel like they are betraying their ex," Brenner says.

2
Her thoughts tend to be somewhere else during sex.

When you're intimate with your partner, does she avoid eye contact? Or perhaps even avoids looking in your general direction at all? If your partner seems totally out of it during sex, then she might be holding on to her ex's previous affections, says Brenner.

3
She holds on to mementos from her ex.

Even after you've told your partner that these mementos from her ex make you uneasy, she refuses to give them up, and, according to Brenner, this presents one of the biggest signs that your partner is refusing to move on from old memories of her previous relationship.

"Your partner may get annoyed and make up excuses, or say they'll get rid of these things, but never seem to get around to doing it. You may also notice your partner looking at items, or holding them, and looking wistfully into the distance…suggesting your partner is missing their ex and thinking about times they spent together," says Brenner.

4
She professes her love for you constantly. If she's constantly intent on declaring her love and commitment to you, while it is a nice gesture, it can often mean that she is trying to convince you—and herself—that she truly is over her ex and ready to fall into your arms. According to Mark Borg Jr, Ph.D., community psychologist, psychoanalyst, and co-author of Relationship Sanity: Creating and Maintaining Healthy Relationships, this type of behavior is the clearest indication that she's not yet over her ex.

"Any time that a partner—especially in a new relationship and even more especially in a new relationship that is a rebound—spends an abundant amount of time and energy professing (loudly, obsessively, passionately, ‎annoyingly) their certainty that 'this is it!' it is quite likely that they are missing their ex. The issue here, though, is not that this person is trying to convince you (their new partner) of their love (and their being "over" their ex). They are, instead, working very hard to convince themselves (that they don't miss their ex)," he says.

If you've noticed that she is prone to browsing her ex's social media accounts frequently (at least the times that you have been around to witness such behavior), it's another clear-as-day sign that wants to keep tabs on her ex—that she isn't looking to let go of this person, says Brenner. This sustained interest shows that she hasn't even tried to move on from her ex, and when you confront her about it, she's only defensive of her actions.

6
She suddenly talks a lot more about her ex…

According to Heidi McBain, marriage and family therapist and author of Life Transitions: Personal Stories of Hope Through Life's Most Difficult Challenges and Changes, when your partner begins to talk more about her ex, recalling memories or habits from their former relationship, when she only used to bring her ex up occasionally, she could be attempting to process her feelings for this ex.

7
…or she's stopped talking about her ex altogether.

On the flip side, if she used to bring her ex up from time to time and now doesn't at all, even when instigated by you, then she could be keeping these feelings to herself to hide how she really feels about the ending of her relationship with her ex, says McBain.

8
She compares you to her ex.

If you find that your partner often says things like "you treat me so much better than my ex did" or "my ex was never open to trying new things like you are," then, according to McBain, this could point to the fact that her ex is always on her mind—which doesn't bode well for your chances with her. While it doesn't matter whether the comparisons work in or against your favor, those that are complimentary to you are most likely manifestations of her own guilt for still harboring feelings for her ex.

9
She stays in touch with her ex's family. Even if she has formed an incredibly close bond with her ex's family and has stopped contacting her ex, it can still point to the fact that she hasn't let go of that part of her life, says Vikki Ziegler, a relationship expert and divorce attorney. In fact, not only is this continued relationship bad for her current relationship with you, but it can also negatively affect her ex's family if boundaries are not discussed.

10
She wants to take you to the same places she went to with her ex.

When your partner wants to continue the old traditions that she had with her ex—only now, with you—this should set off immediate alarm bells in your head. According to Ziegler, the fact that she is vicariously attempting to live through old memories of her previous relationship means that she doesn't wish to create new ones with you—therefore subconsciously stifling your current partnership.

11
She refuses to talk about her ex. 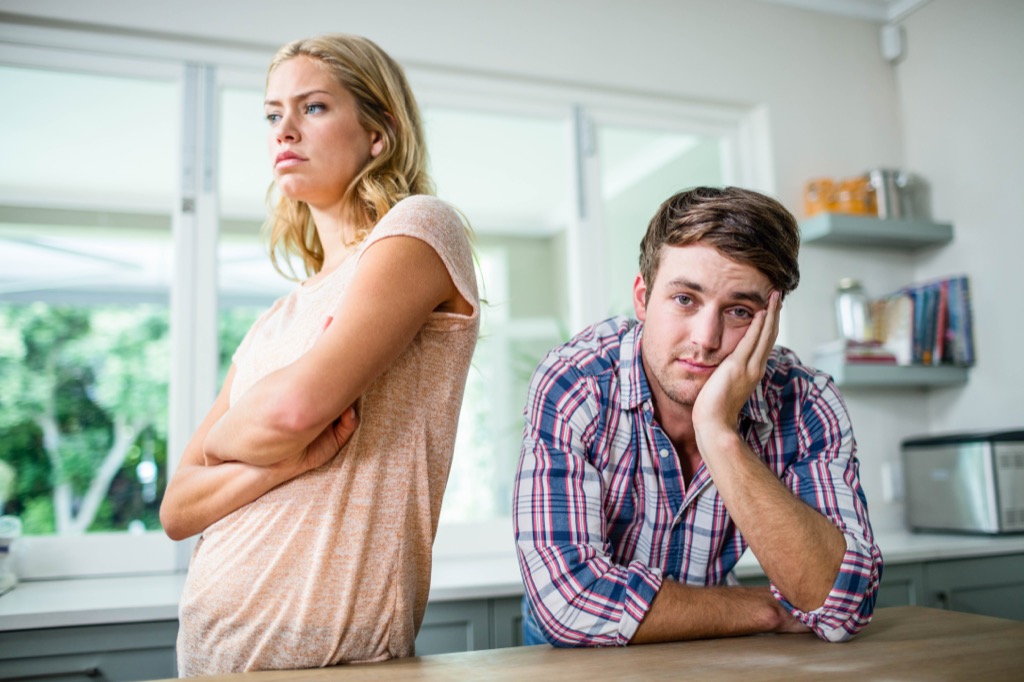 It's one thing if she just never mentions her ex—it's another, if, when you probe her for more information about this part of her life, she absolutely refuses to speak a word about it at all. This refusal may point to hurt feelings or a secret longing for their ex, says relationship psychotherapist Lena Derhally.

12
She always compliments her ex in conversation.

If you find that she is always more heavy-handed than necessary when it comes to complimenting her ex, then she may either be comfortable with discussing these topics with you, or conversely, not doing much to cover up her true feelings, says Derhally. Either way, this tendency to put her ex on a pedestal with only hurt her in future relationships, as she believes that no one can measure up to her ex.ae0fcc31ae342fd3a1346ebb1f342fcb

13
She doesn't plan your future as a couple.

Face it: if she truly wants to be with you, she will envision a future with you in it. So, if you've noticed that she never wants to make plans more than a month in the future (or, further down the line, never wants to discuss future homes, children, or marriage), then there's a good chance that she's just using you to get over her ex.

14
She mixes up the details of your relationship with her previous one. 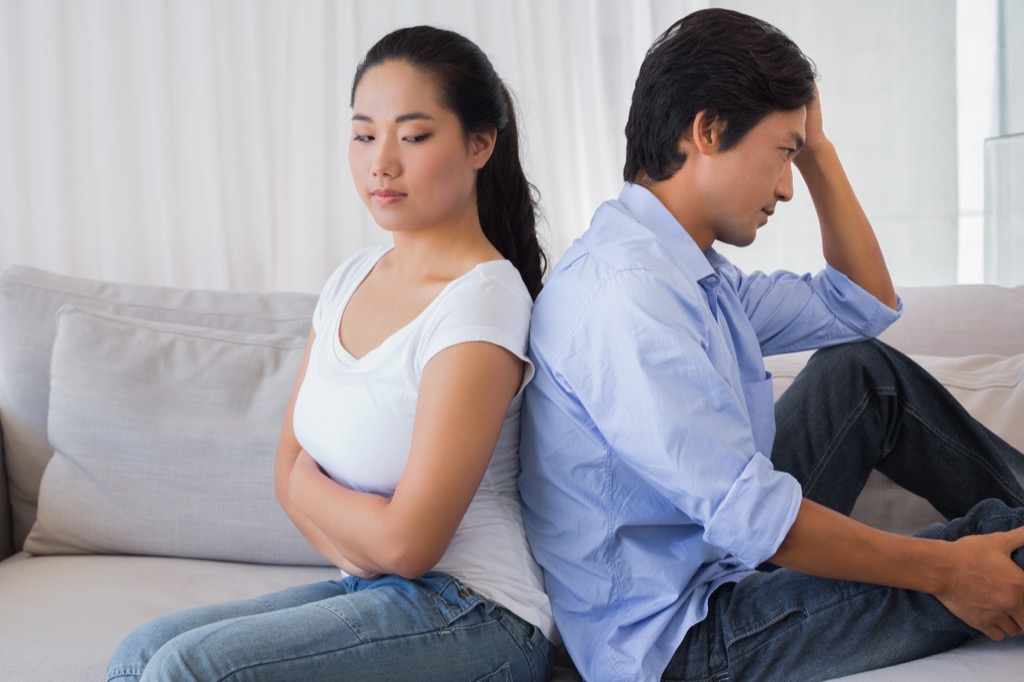 If she sometimes forgets that her ex is the one who likes to hike, and not you, and other mix-ups of that nature, she's not truly working to get to know you. When she is constantly fixated on details of the past, it can become hard for her to bring herself to be present with you, her current partner.

15
It's been months and you still haven't met her family.

Not only have you not met her family, but you're not even sure that they know you exist. If it's been more than a few months and you still haven't even met her family, let alone been mentioned in passing by her, then it might be a clear sign that she isn't taking the relationship with you seriously. Further, this might be an indication that she is only using you to get over the ex that she obviously misses—and getting her family involved in this rebound is too much for her to handle.

16
Her friends are surprised she's dating.

Newsflash: if her friends have no idea who you are, then she's not taking this relationship seriously. Since it's often standard practice to obsess over your flings, serious or casual, with your closest friends, it's entirely too suspicious that she hasn't even mentioned that she's dating anyone to her friends—perhaps, in large part, because she's still analyzing her ex's actions with her pals.

17
She still feels anger towards her ex.

Whenever you try to bring up her ex in conversation, does she immediately express feelings of anger towards them? Or is she open about her hurt feelings? Either way, the fact that she harbors any kind of resentment or anger towards this person is a clear sign that this breakup is still fresh in her mind. Her anger means that she still has feelings for this person.

18
She doesn't bring you around the mutual friends she shares with her ex. As Wendy Walsh, Ph.D., author of The 30-Day Love Detox, told Today, when she refuses to bring you around her ex's mutual friends, it might be because she either doesn't want you to see how she reacts around her ex, if they happen to show up, or she doesn't want her ex's mutual friends to know that she's dating anyone else, lest they reveal this information to her ex. At the end of the day, she doesn't want her ex to think that she has moved on.

19
She won't create or enforce boundaries with her ex.

In every romantic relationship, it's important to establish boundaries—like how often you should be communicating with your ex, etc. If she's incredibly resistant to any boundaries pertaining to her ex, or, upon, agreeing to those guidelines, she begins refusing to enforce them, she is most likely doing so because she doesn't want to lose communication with her previous partner. If she is fearful of restrictions associated with her ex, it means that she isn't ready to move on just yet—but you should.

20
They still have romantic pictures together on social media. 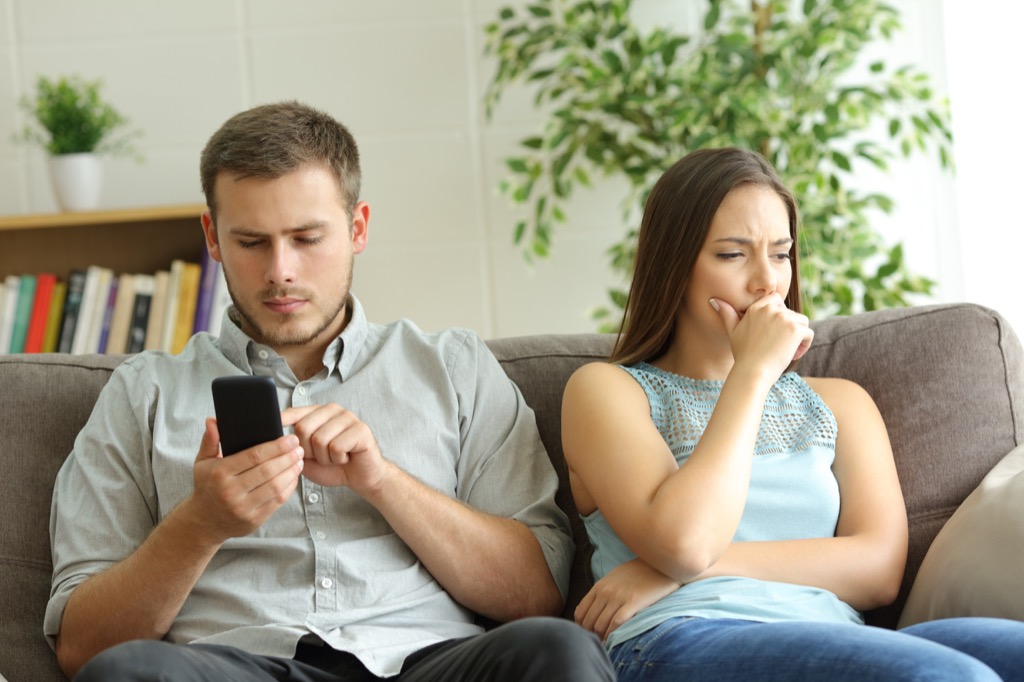 While it's completely understandable to leave a few relics of your previous relationship on social media, it's likely crossing a line if the more romantic photos of an ex haven't yet been taken down. So, if you notice that her Instagram account still contains many romantic posts featuring her ex (and worse, she never wants to take any photos of this variety with you), then she might not want to admit to herself or to the rest of the digital world that her relationship with her ex is, in fact, over.

Ashley Moor
Ashley hails from Dayton, Ohio, and has more than six years of experience in print and digital media. Read more
Filed Under
Dating
Read This Next
Latest News
Read This Next