You wouldn't want to roll the dice with these games.

There are so many classic board games out there — Clue, Sorry, Monopoly, and Trivial Pursuit, to name just a few — that it's easy to forget that not all games are winners. For every timeless game like Scrabble and Risk, there are less successful contenders like Life on the Farm, where you basically have to milk cows and pay your farming expenses until you retire, and Skworms, where the object is to pull worms out of a skeleton. Yes, believe it or not, somebody at a reputable game company like Parker Brothers said, "Yes, we should make this game immediately." Here are 30 of the absolute worst board games ever created. And for more bad stuff you shouldn't waste your money on, check out the 30 Worst Home Appliances Ever Created. 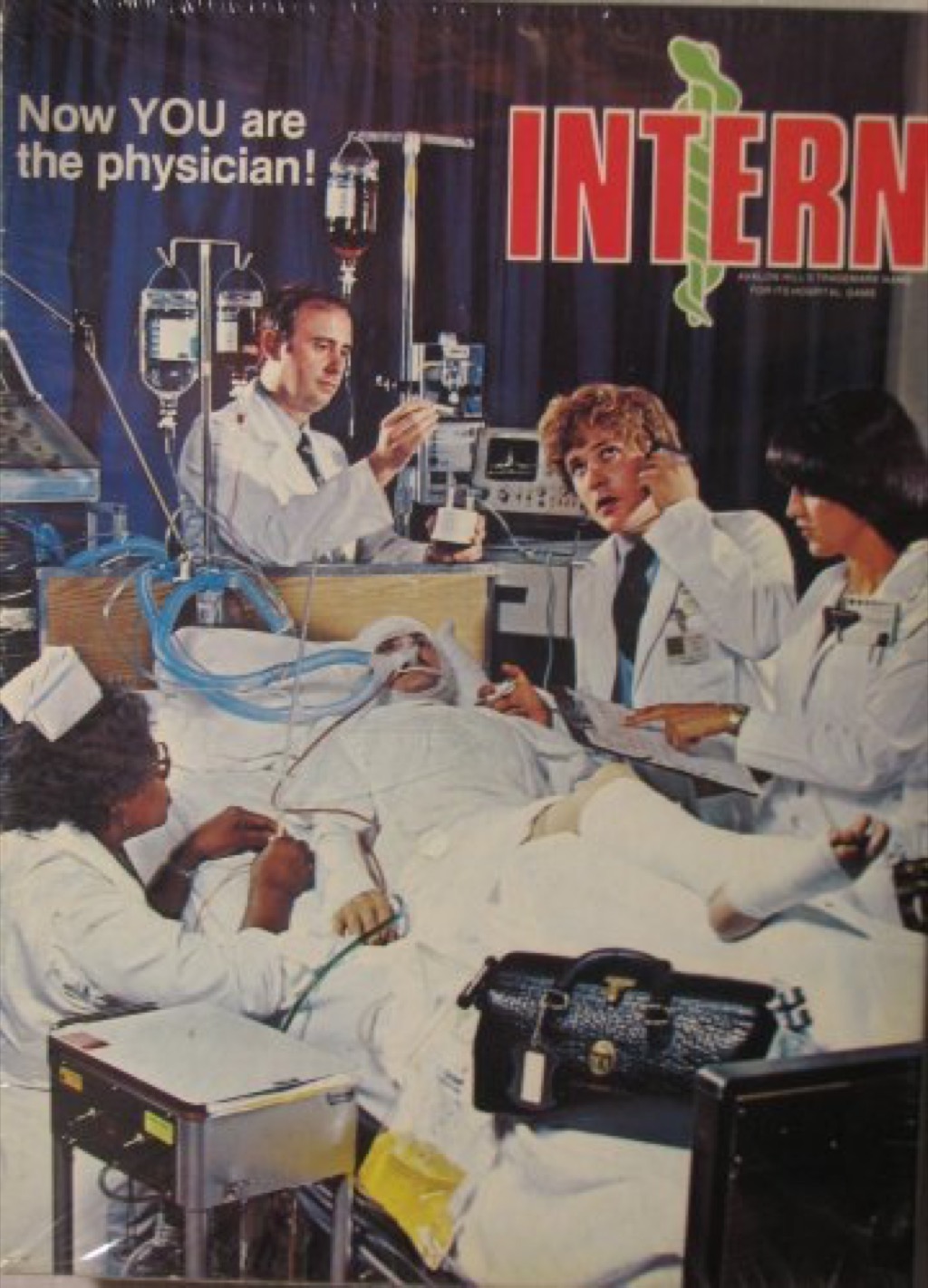 This game is Monopoly set in a hospital, and each player has to admit patients, diagnose them, and somehow not kill them to win the game. There's no money, but you can earn valuable sleep, which of course is every medical student's dream. This one should definitely be added to our list of the 40 Things No One Over 40 Should Ever Buy. 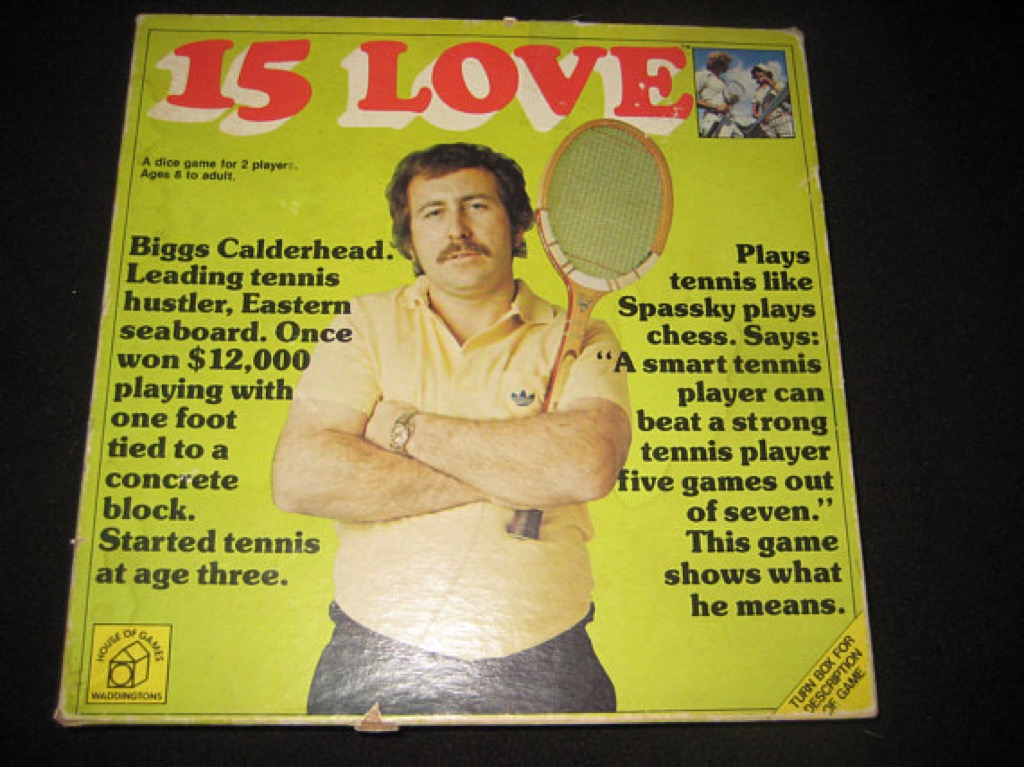 If you love tennis, but wish it was slower and less athletic and involved mostly sitting and rolling dice, this is the game for you! While tennis as a board game may be infinitely lame, playing a game in real life is a great workout. In fact, playing a game of tennis made it on our list of the 30 Workouts That Burn More Than 500 Calories an Hour. 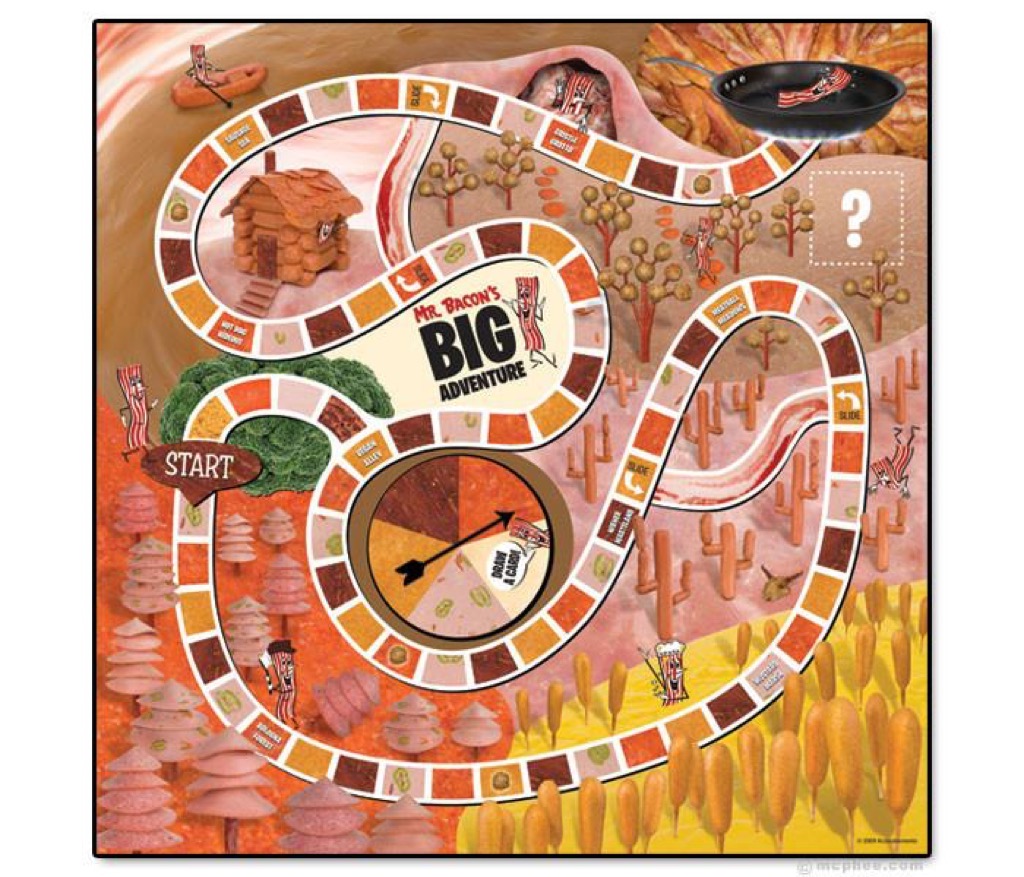 Take Mr. Bacon on a journey through Meatland, where you have to sail across the Sausage Sea and past the Weiner Wasteland to get safely to the Great Frying Pan, without ever going, "Wait, why are we playing this game again?" For more on the weirdly hysterical, check out these 40 Dumb Wordplay Jokes That Will Crack You Up. 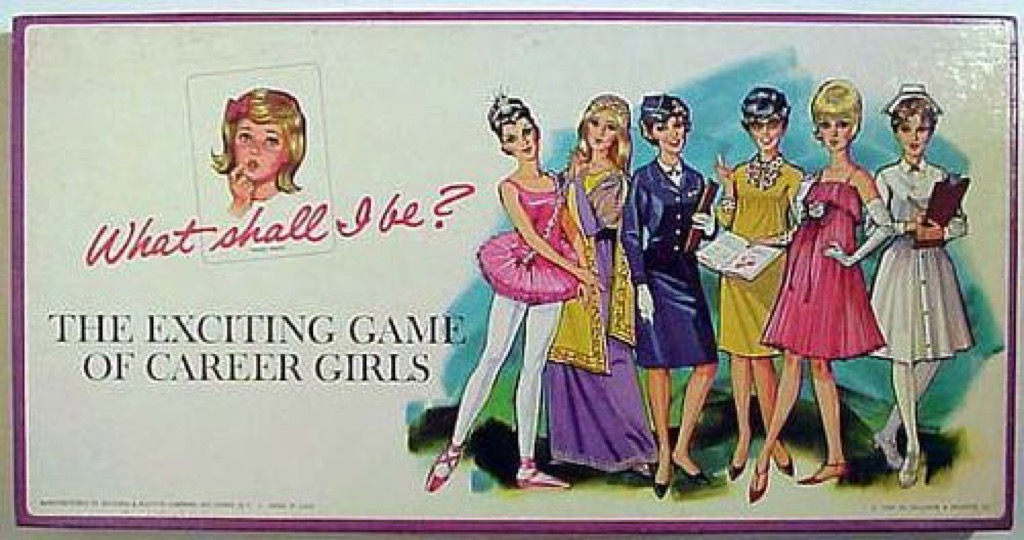 Players compete to become the Career Girl, and the choices are sooooooo last century. You can aspire to be a teacher, airline hostess, actress, nurse, model, or ballet dancer. That's it. Only worth playing if you want to be reminded how far we've come. For some much needed 21st-century girl power, check out these 7 Inspiring Quotes from the Billboard Women in Music Awards. 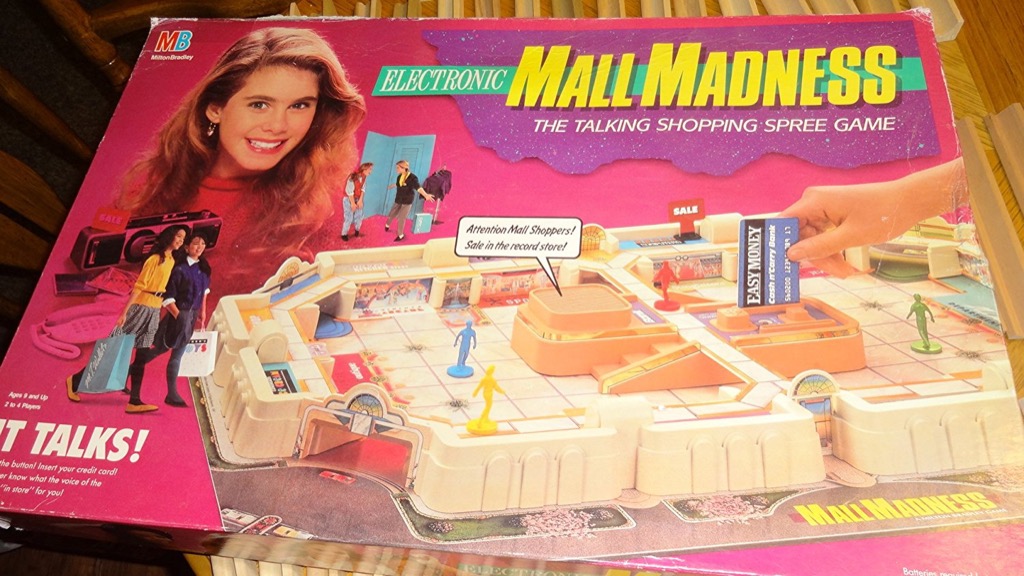 An electronic voice tells you where all the sales in the mall are happening, and then you go there and buy things. If you run out of money, just go to the bank and get more. The first person to buy six items and makes it make to the parking lot wins. The game is awful, but we do kinda wish some of the fake "stores" existed, like Aunt Chovie's Pizza, Scratchy's Records, Chip's Computers, Fork It Over Kitchen Store, and DingaLing Phones. 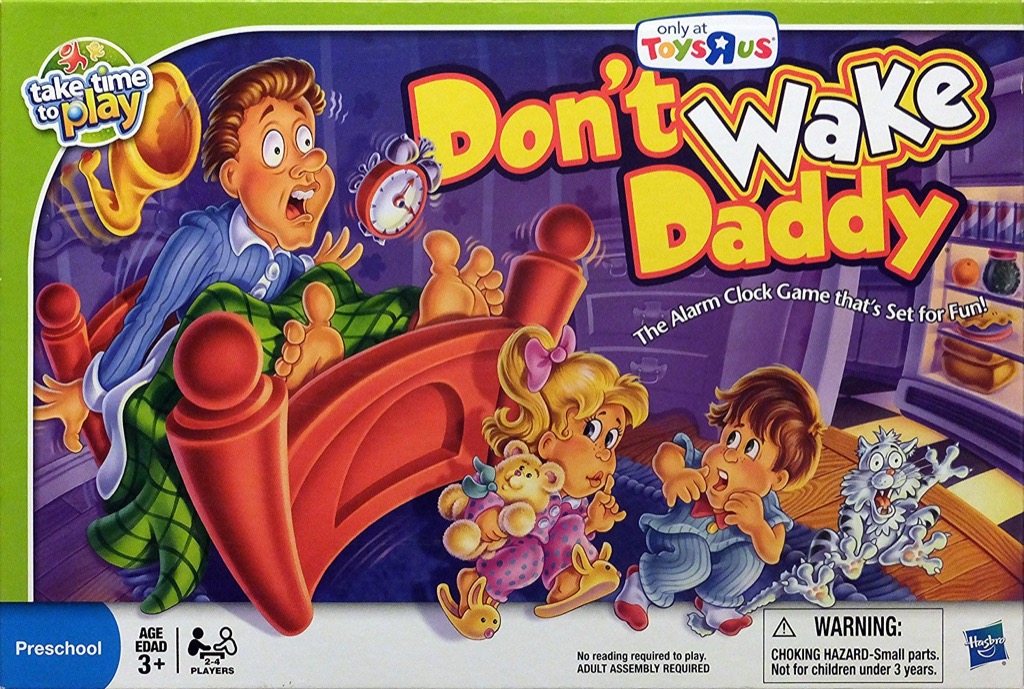 Be the first one to tip-toe past Daddy — who for some reason is sleeping in a spring-loaded plastic bed — and get a midnight snack, because we guess Daddy sleeps alone right next to the refrigerator. We have so many questions that this very strange game never bothers to answer. And for more utterly bizarre trivia, here is the Craziest Fact About Every U.S. State. 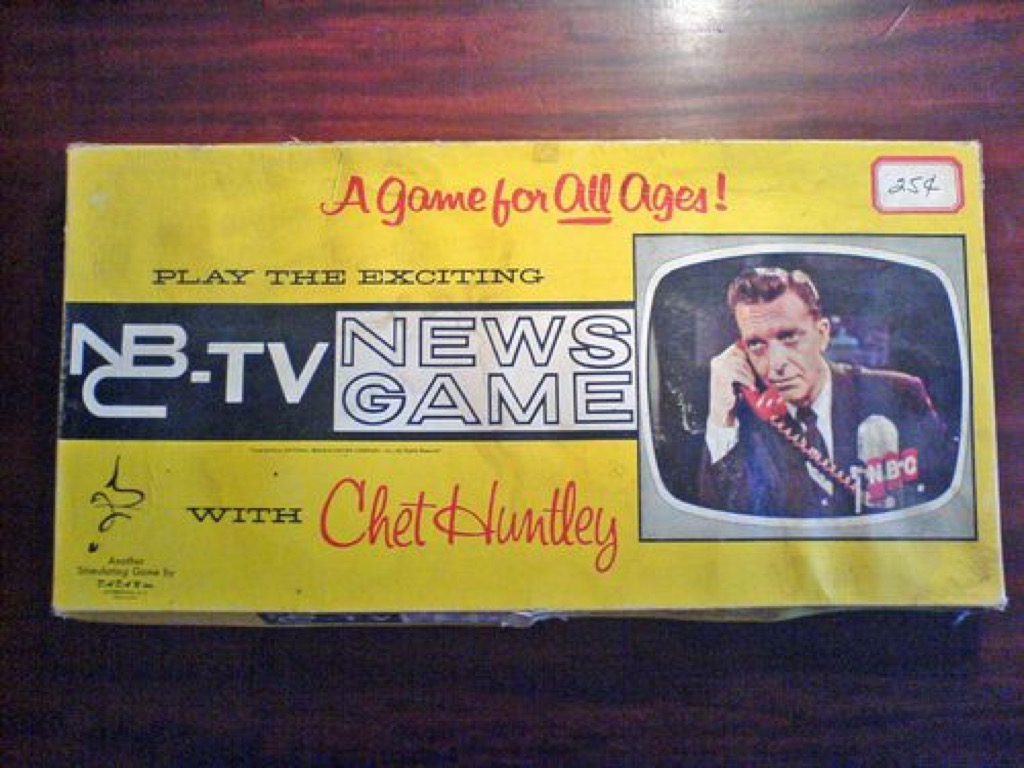 It's a trivia game posing as role-playing TV journalism. You're just like Dan Rather, if his job involved answering questions like "What is the capital of Uruguay?" And for newspaper humor in real life, check out these 25 Funniest Newspaper Headlines Of All Time. 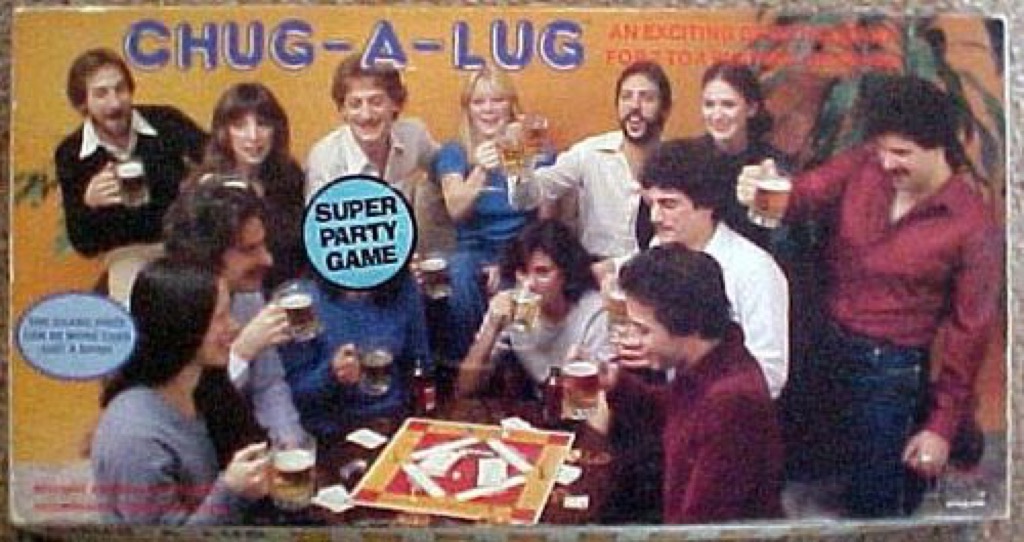 According to the box, this game "pits your competitive spirit against your drinking capacity." In other words, the winner is the first one to get drunk. And to see your favorite celebrities totally sloshed (no board game required), check out these 10 Times Celebs Appeared Drunk on Live TV.

It's a surprisingly confusing game for such a simple premise. A plastic Bigfoot is loaded with ten discs, some of which contain footprints. Players have tokens, and if they land on a Bigfoot space, it moves the creature forward, and hopefully it lands on an opponent's' token, in which case a disk is taken out, and if it's a footprint the player is eliminated. See what we mean? Confusing. 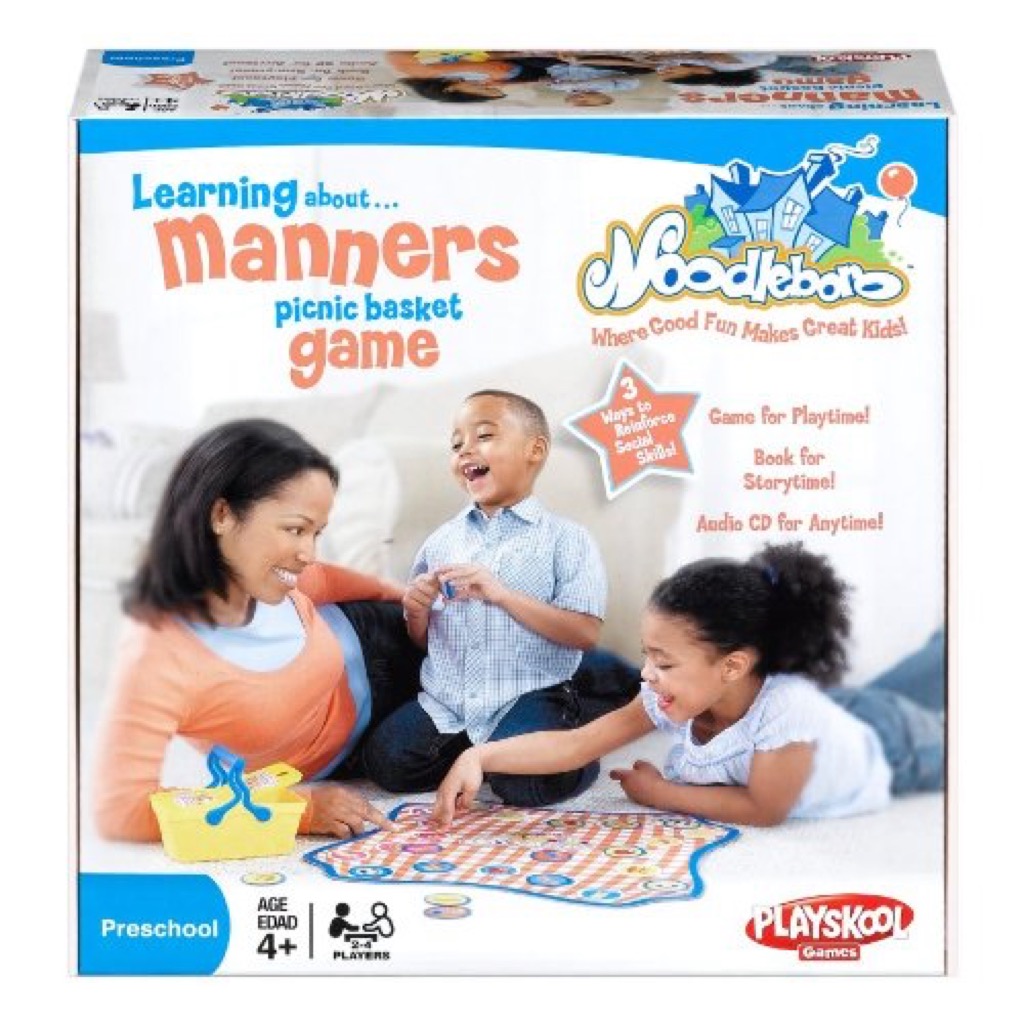 Kids learn about manners by getting ants to stop stealing food from a picnic by saying "Please" and "Thank you." Um… wait, what? Unfortunately, this board game didn't make it on to our list of the 40 Parenting Hacks for Raising an Amazing Kid. 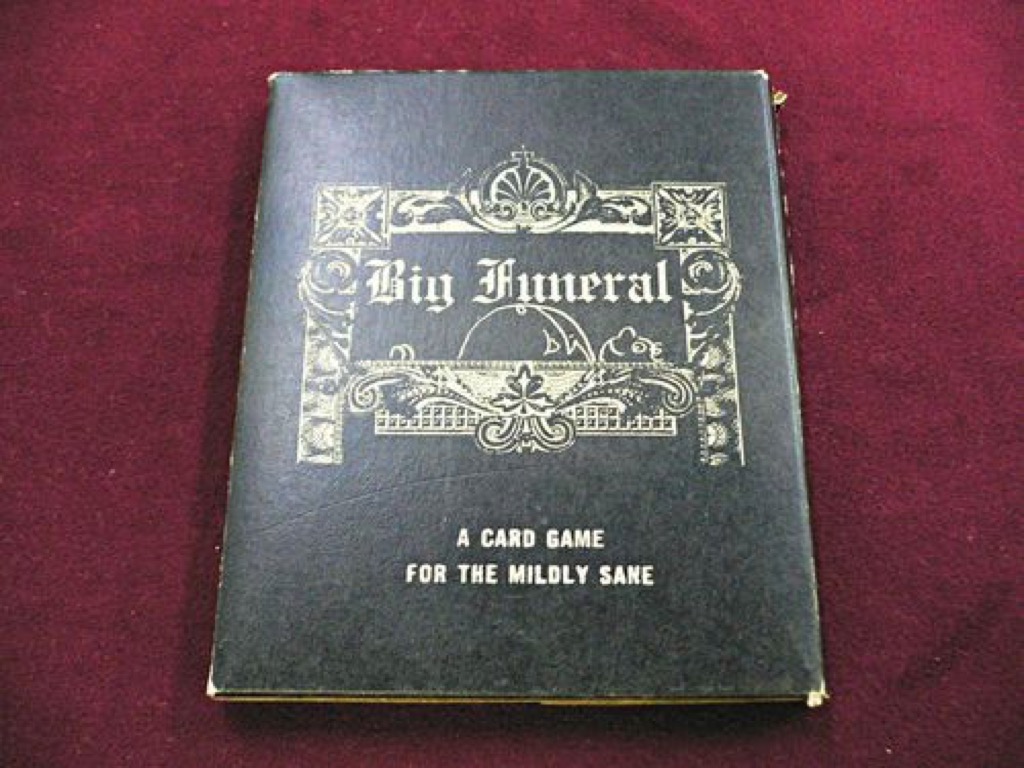 Because who among us hasn't thought "Funerals are so much fun, I wish I could make them a part of family game night?" With objects like "Make Your Friends Look Cheap, Send Them To Slob Hill In An Orange Crate Coffin," you know this game is going to be classy good times. 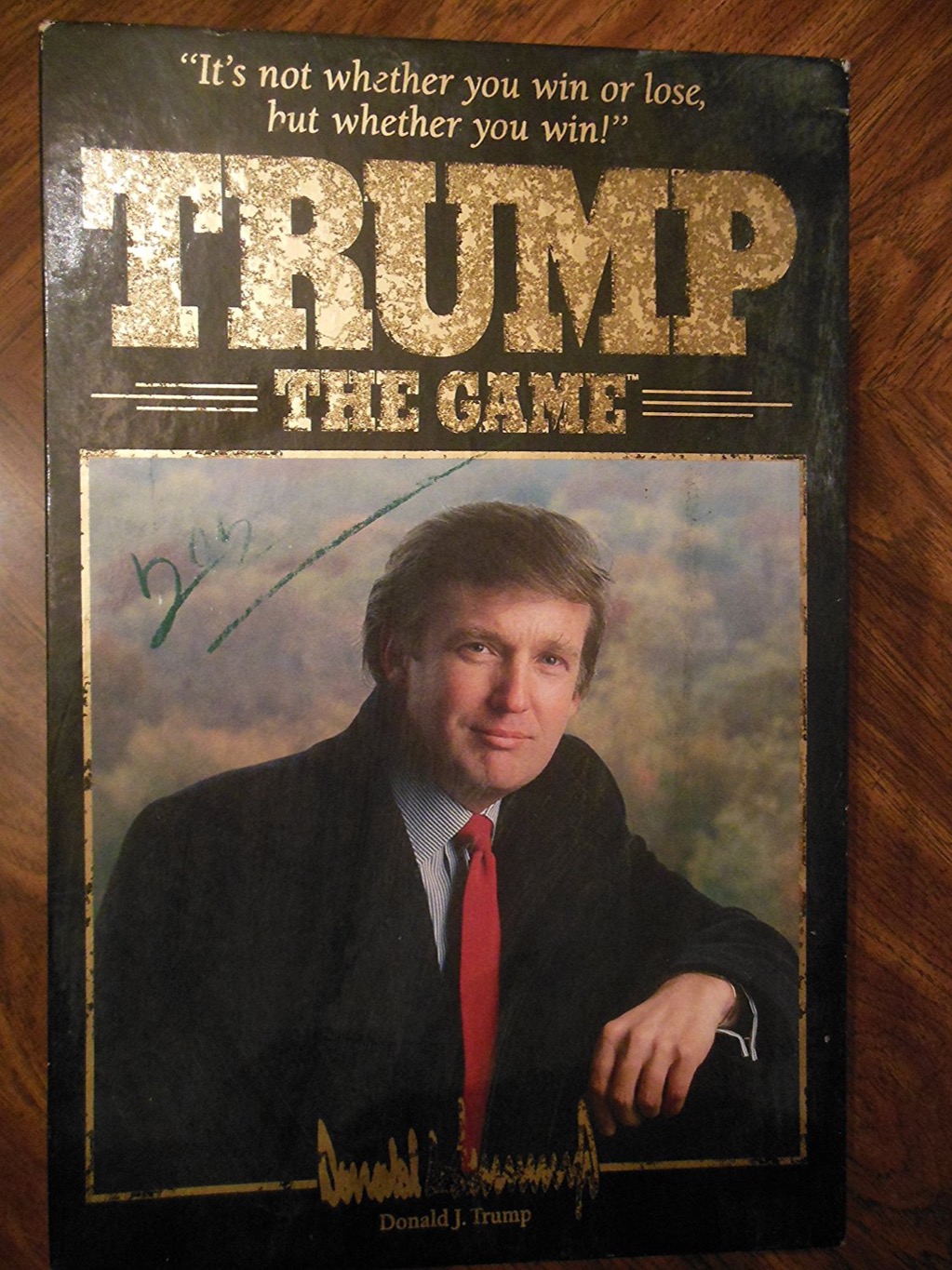 We're still not sure how this game is played, but after watching this crazy TV commercial, we have a pretty good idea. "It's not whether you win or lose, it's whether you win." Gotcha. So it's like Monopoly, but meaner. 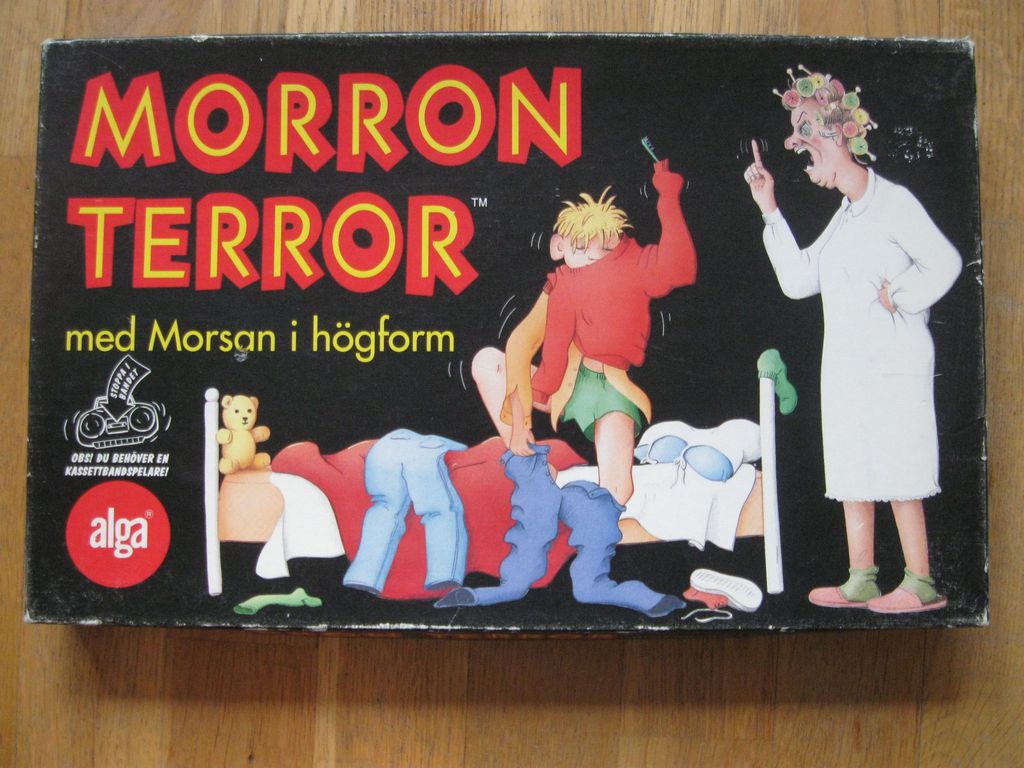 The goal is to get a kid named Freddy dressed. No, really, that's it. This Swedish game — it's translated as "Morning Terror" — challenges players to see who can get Freddy into his pants first. We're sure there's more to it than that, but they kinda lost us at the premise. 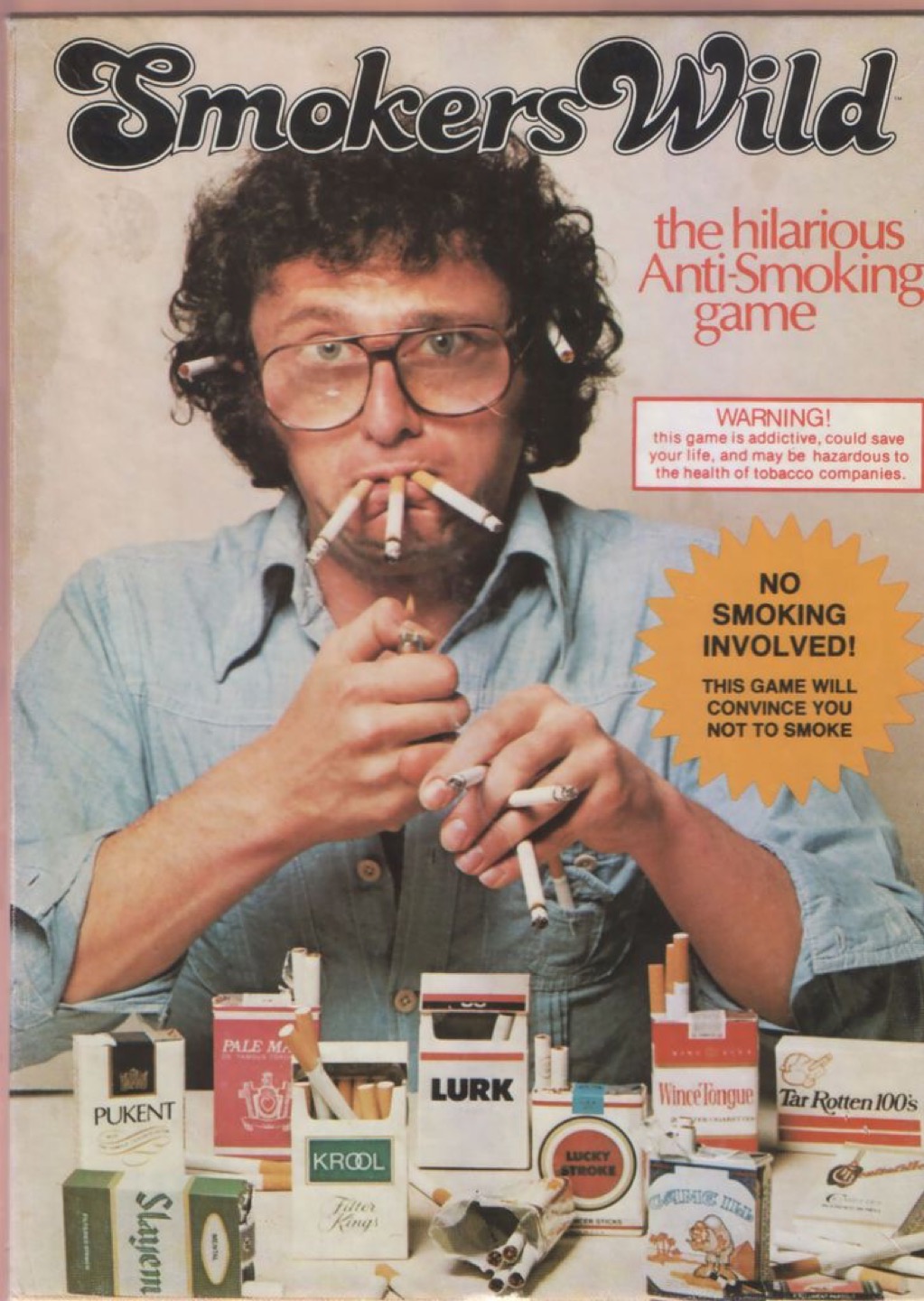 An anti-smoking game that's way more macabre than necessary. The point is to move around the board without smoking. Failing to do so advances your time on the Life-O-Metre and could end in your death. The player who smokes the least, despite many temptations, lives and thus wins. And for more ridiculous humor, here are 40 Corny Jokes You Can't Help But Laugh At. 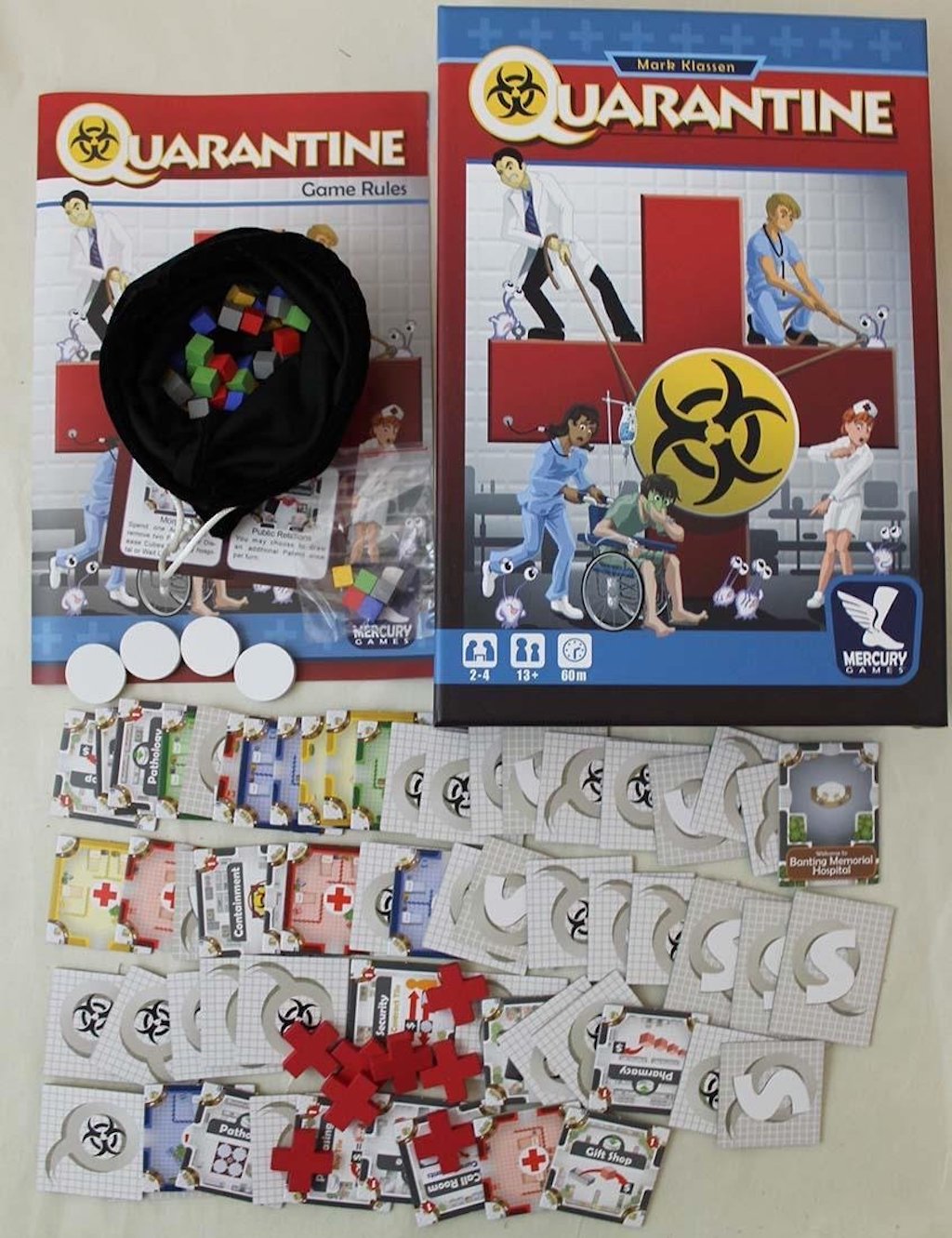 All the fun of getting contagious patients admitted to a hospital before the infection spreads and all the medical staff has to be quarantined, with all the boredom of a slow-moving board game where you have to collect "tiles" and somehow make it to the end before deciding this is way too confusing and time-consuming and we could've just played Sorry instead. For a better waste of time, check out these 40 Dumb Wordplay Jokes That Will Crack You Up. 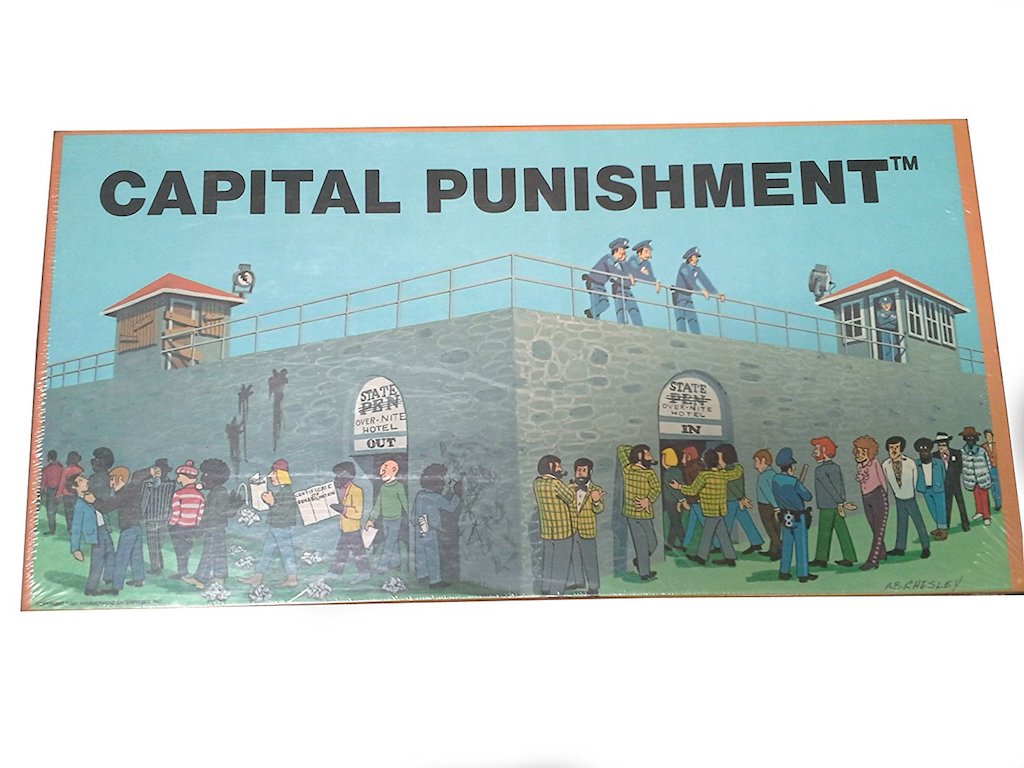 You win by getting all four of your "criminals" into Life Imprisonment, Death Row, or the Electric Chair. No, seriously, that's how you win. You beat the opposition by getting their criminals away from the "Path of Justice" and back on the Street where they can murder more innocent victims. 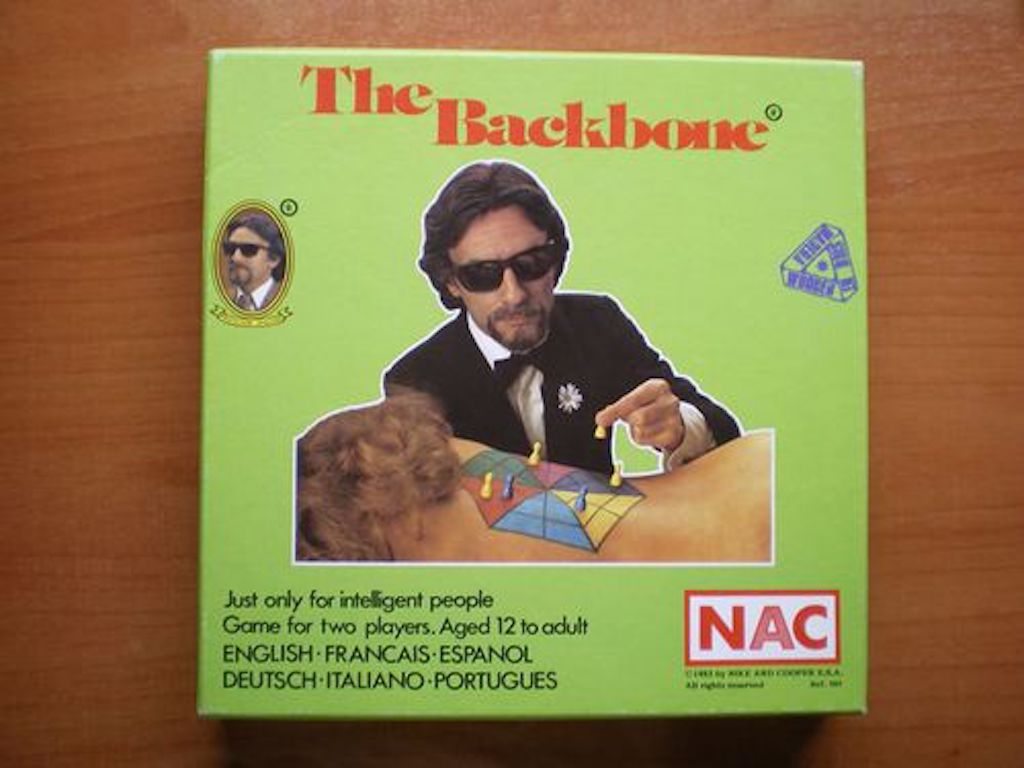 This game is unfairly deceptive. From the box, it looks like The Backbone is going to be a lot more fun. But the actual game involves geometry and getting six of your chips on six squares of the same color, or something. 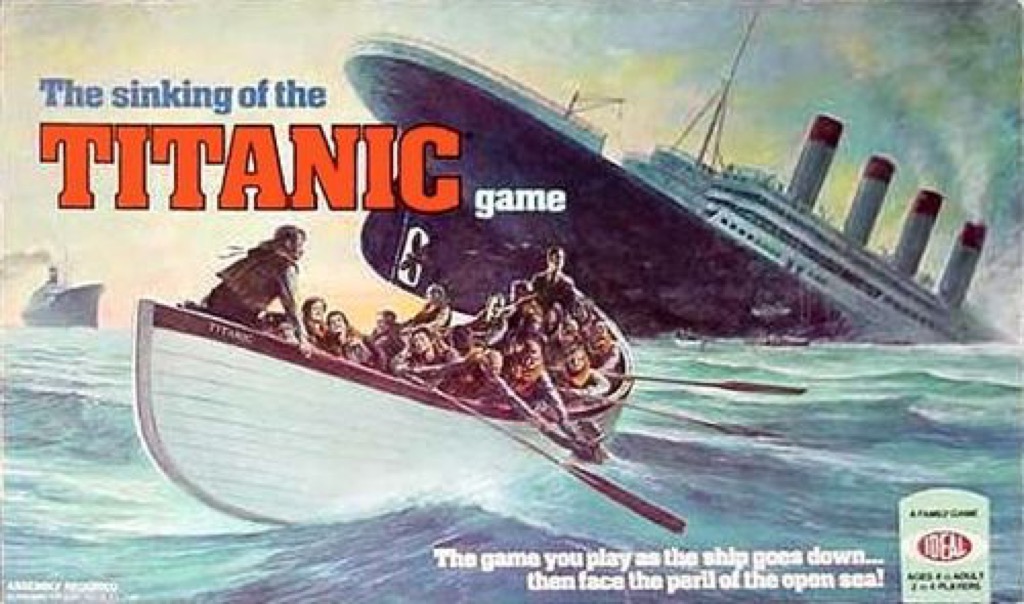 The goal is to escape the sinking ship and get enough food and water from nearby islands — wait, what? — until rescue boats save you. The last player standing wins, and everybody leaves with a very confused history lesson. 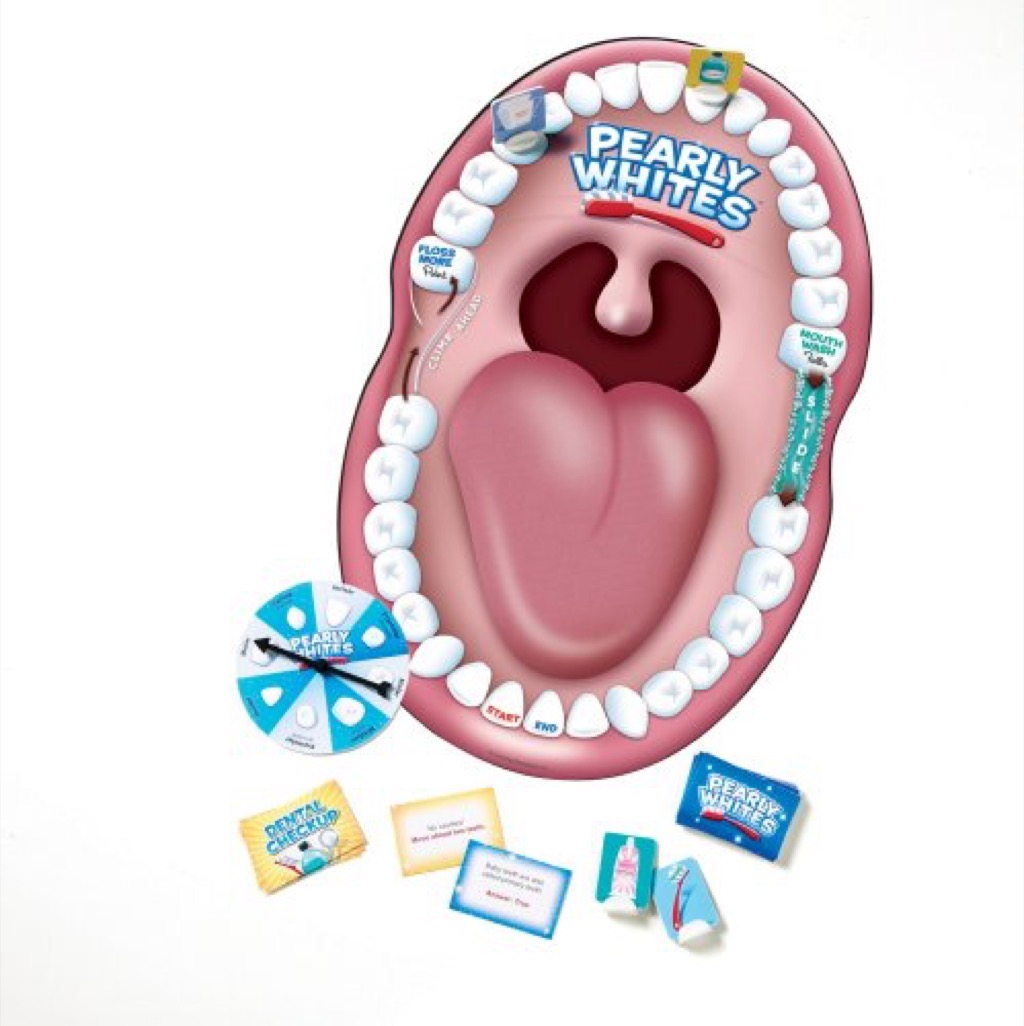 No. Just no. We don't care if it's just trivia about good oral hygiene, everything about this mouth-shaped game board creeps us out. 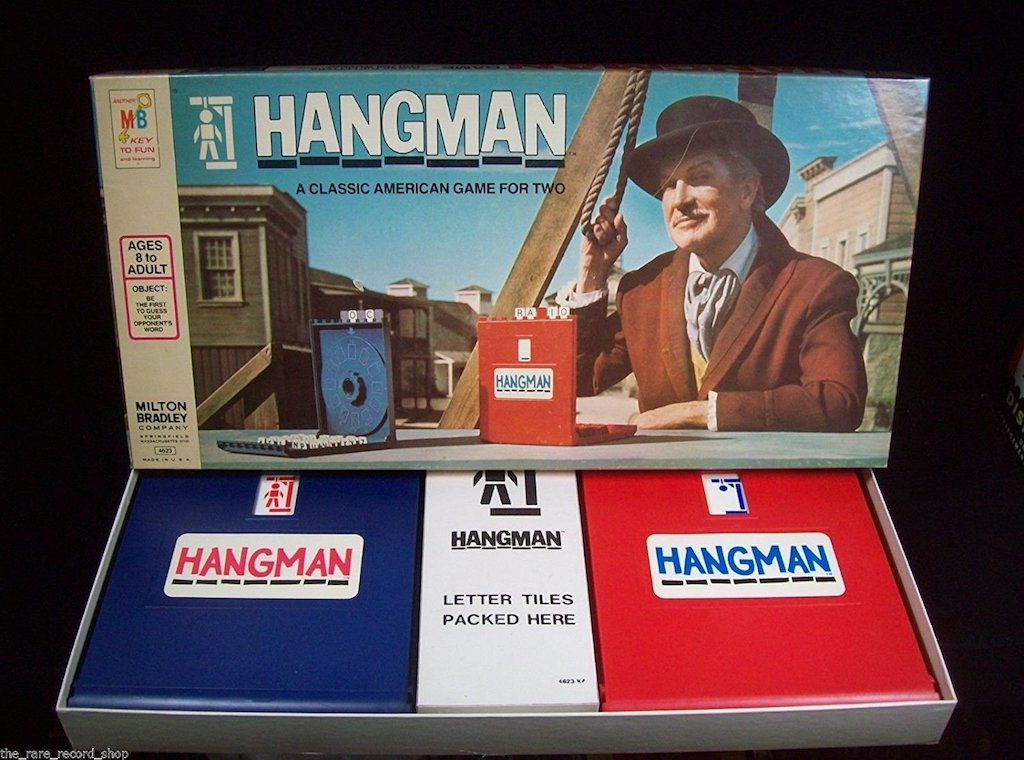 You see Vincent Price on the box cover and think, "Oh, this must be a fun game!" You'd be wrong. (But the vintage commercial is pretty entertaining.) 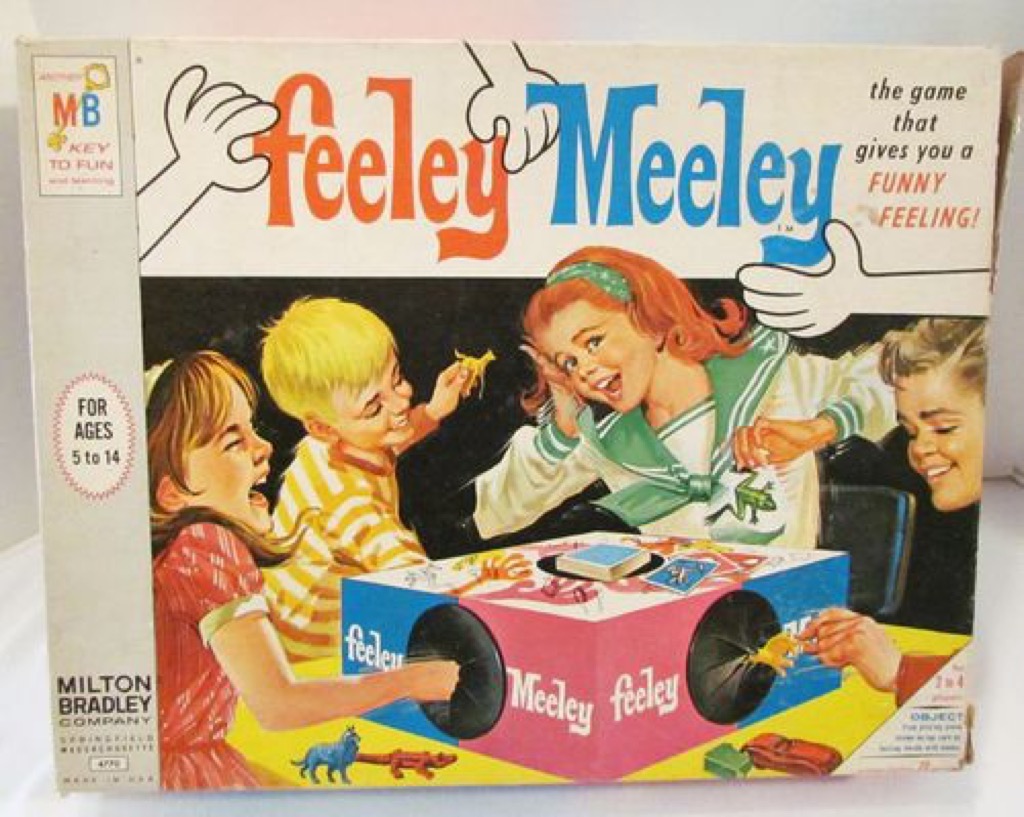 Put your hand in a dark hole and try to figure out what you're feeling. What could possibly go wrong? 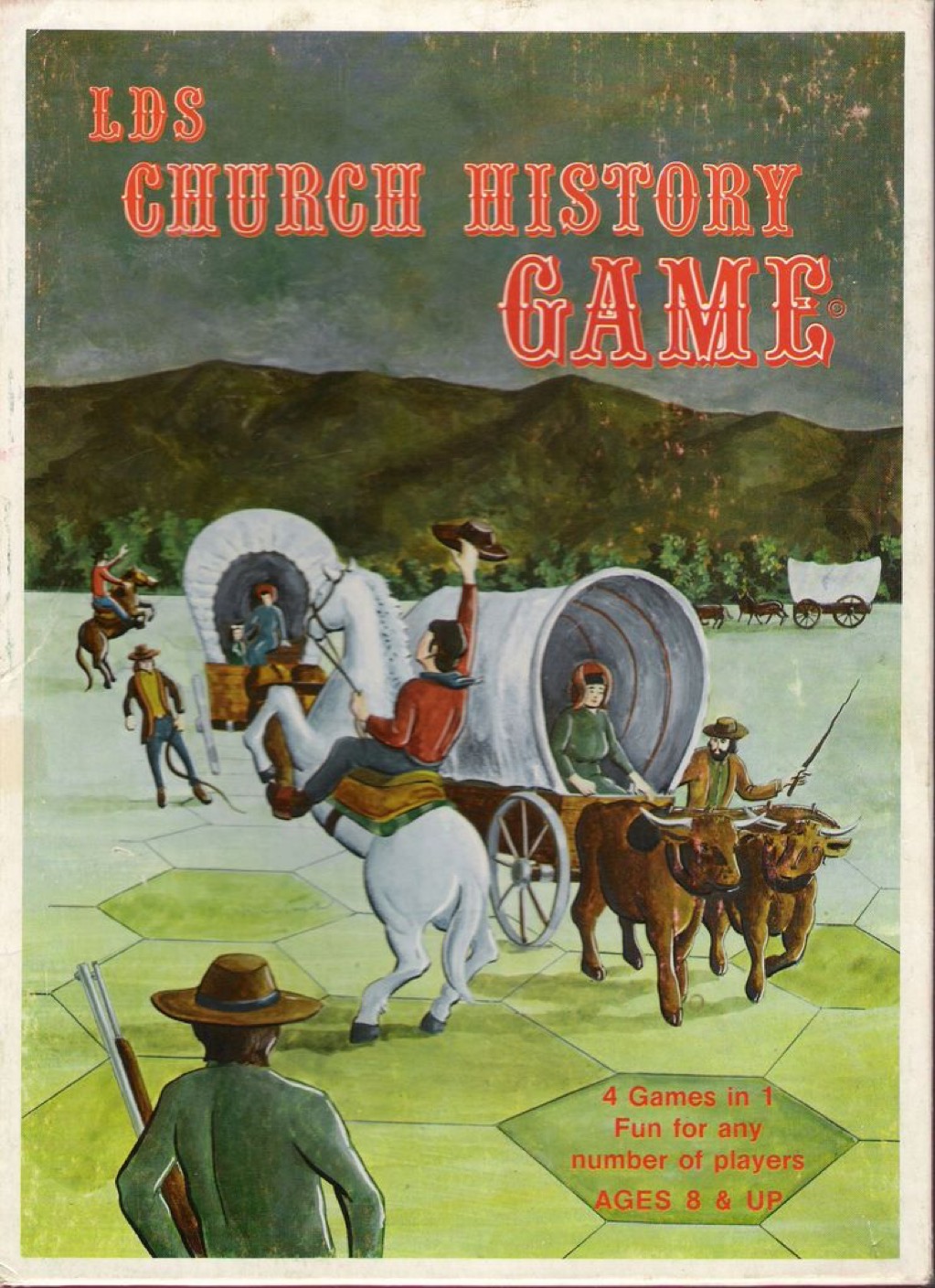 Finally, a way to learn about the history of Mormonism while playing a fun(ish) board game where you compete to be the first person to make it to Salt Lake City with 15 Testimony Points. 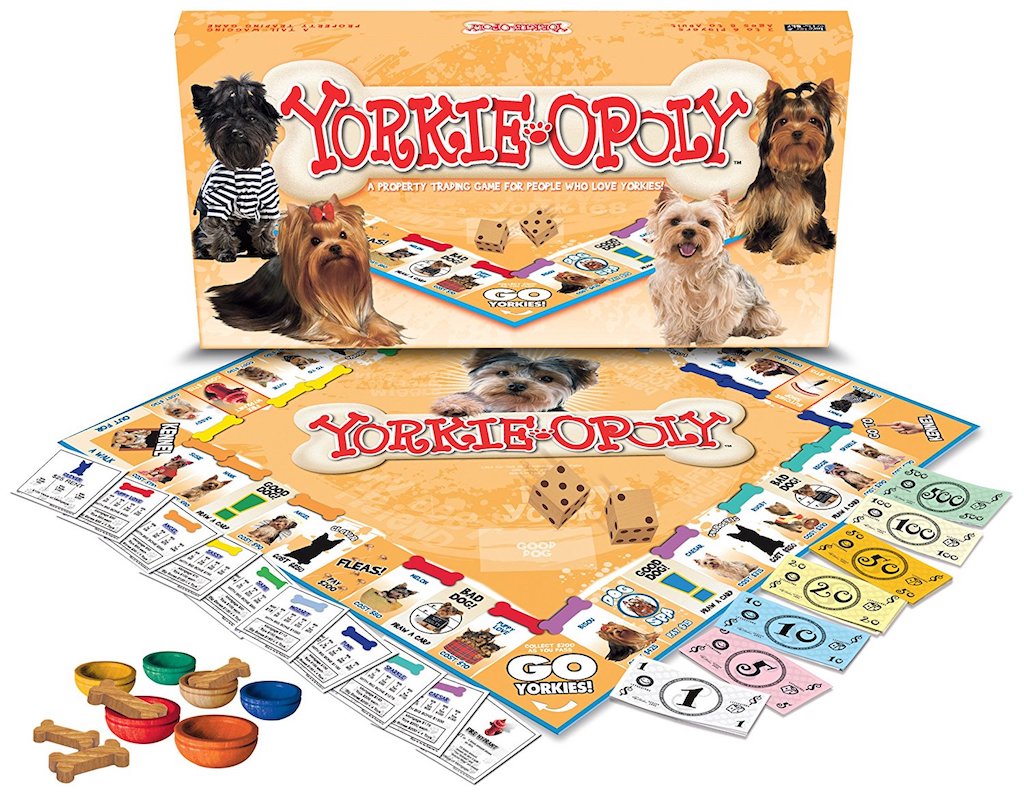 Have you ever played Monopoly and thought, "I wish this was entirely about Yorkshire Terriers?" Us either! But somebody invented the game anyway. Instead of property, you're buying treats for your dogs and upgrading them to Big Bones, all while trying to avoid fleas, kennels, and having an "accident" in the kitchen.ae0fcc31ae342fd3a1346ebb1f342fcb 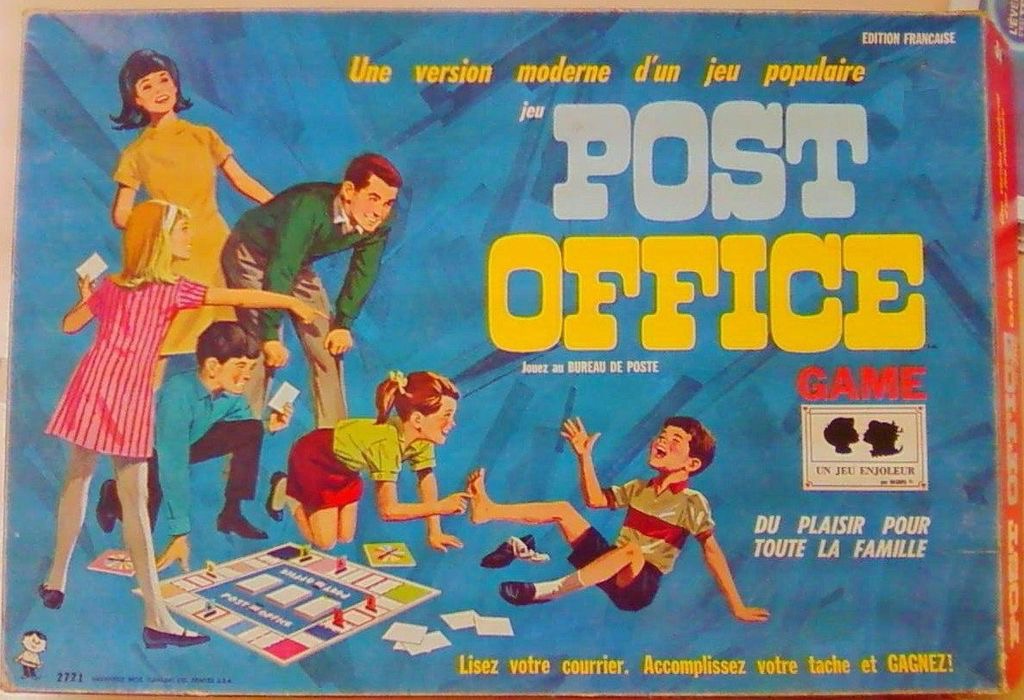 You'd think a game called "Post Office" would at least be tangentially related to the postal service. But nothing about this board game has anything to do with delivering mail. It's about earning points by doing ridiculous stunts, like eating a potato chip while whistling Yankee Doodle.

We're all for kids being safe, but this game, which promises a fun way to help you "discuss sensitive issues with your child in a fun, relaxed manner," sounds like the makings of the most awkward family night ever. 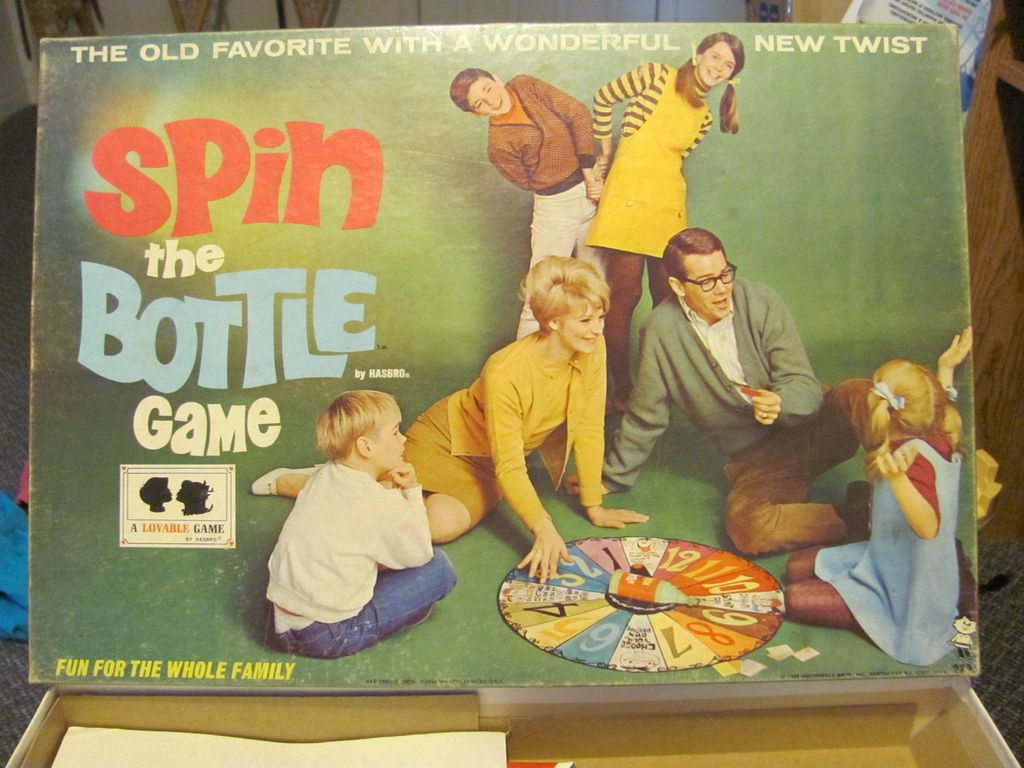 Remember those flirty games of spin-the-bottle you used to play as teenagers? Here's a board game that lets you play that same kissing game with your whole family! Just spin the bottle to… wait, wait, hold on, no, this is not happening! 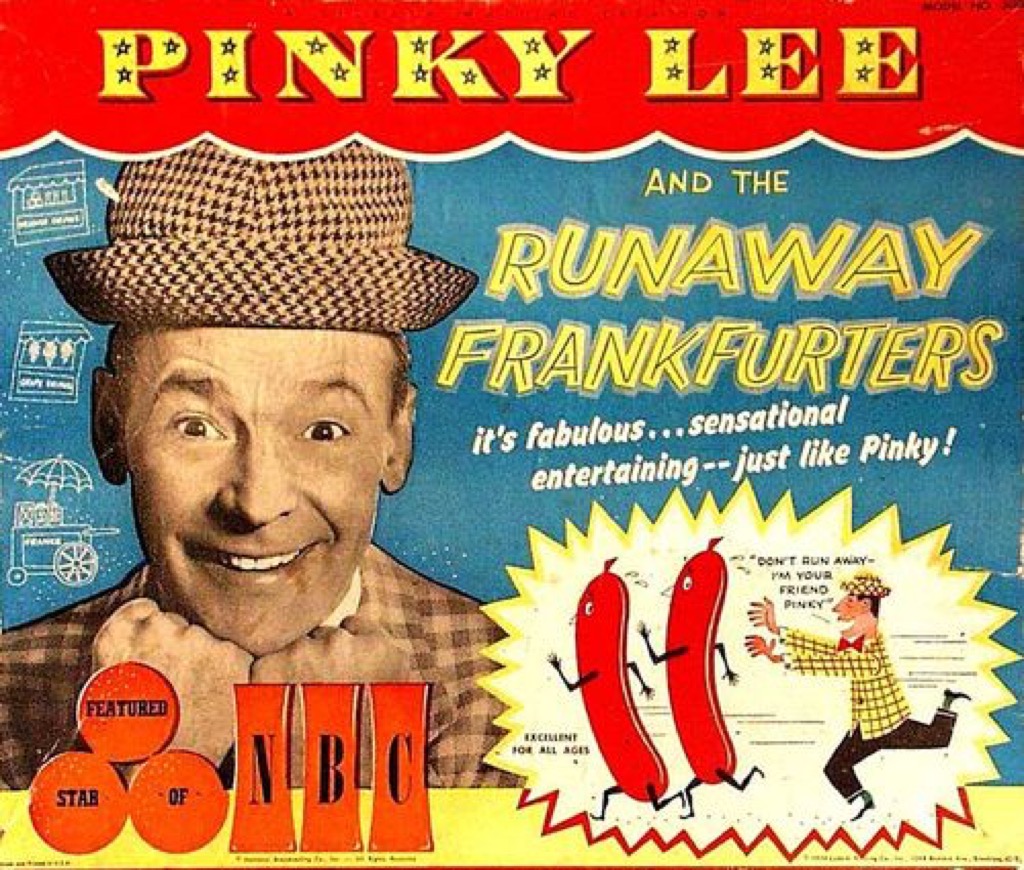 A game with dice and wagons, in which you're trying to steal everyone's frankfurters. Do you need more than that? Are you intrigued? "Steal everyone's frankfurters, okay, I can do that. How's it played?" No, just stop. Save yourself before it's too late. This sounds like a dad-approved board game. For more dad-approved humor, check out these 50 Dad Jokes So Bad They're Actually Hilarious. 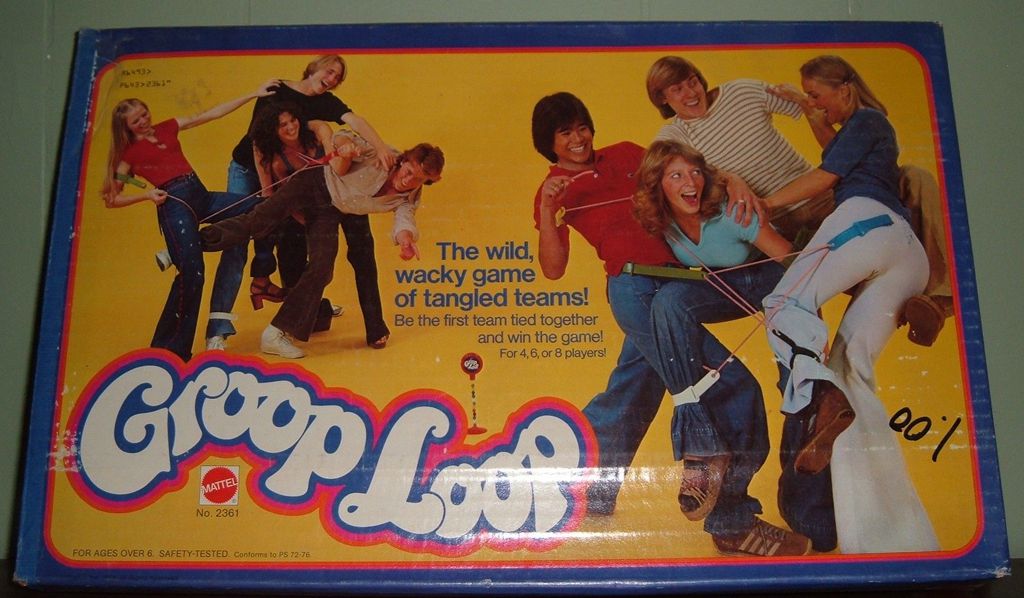 It's like Twister, but standing up, and involving a long cord. If that's not enough to dissuade you, check out this horrifying demonstration. 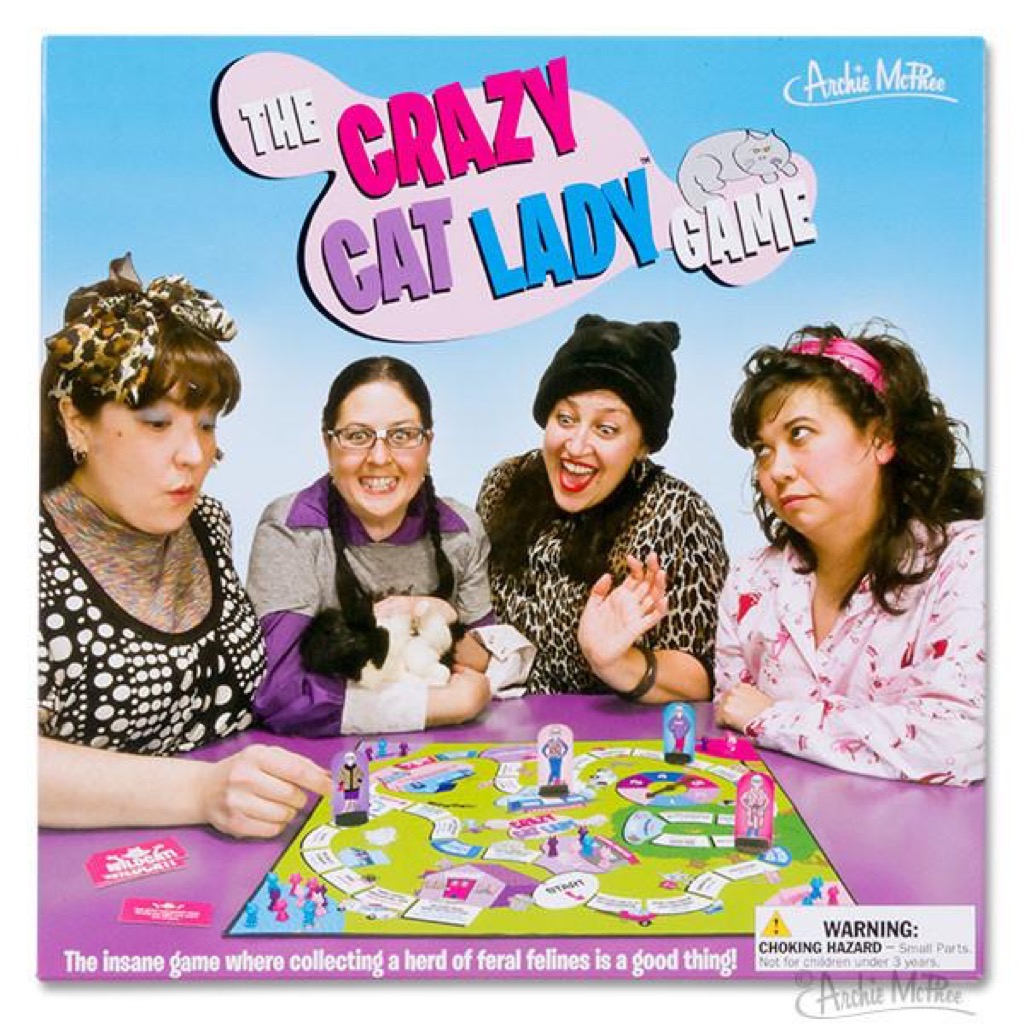 The goal here is to be a little more insane than the competition, collecting more cats around the board — by landing on spaces like "Save a Cat Stuck in a Tree" and "Rescue Grumpy Old Cat From Pound" — until you eventually realize you're old and living in a filthy house with a bunch of cats who despise you. Are you a crazy cat lady (or gent)? This is Why You're a Dog Person or Cat Person. 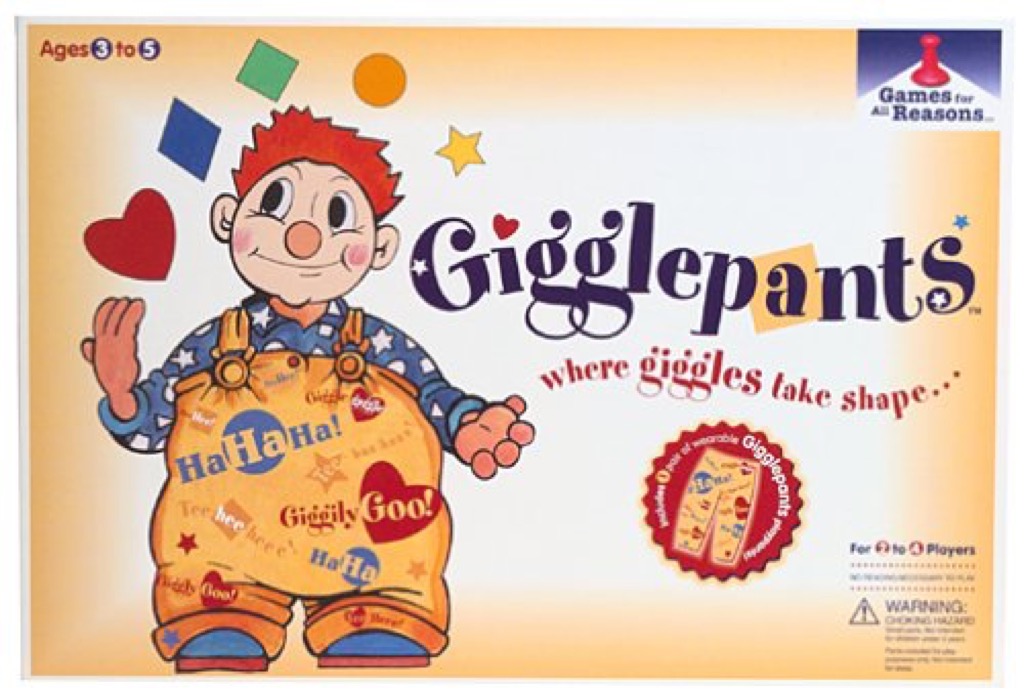 A game for kids about identifying shapes, colors and numbers that for some reason involves putting on a pair of pants — the eponymous Gigglepants — if you land on the wrong spot. A nice way to instill in kids early the importance of sharing filthy plastic clothing with their peers. For more on games that should never ever be played, check out this the Bizarre Truth or Dare Game People Can't Stop Doing—Photos.