23 Reasons You're Tired All the Time

Here are the things holding you back from having the energy to be your best self.

If you have trouble sleeping or feel overly tired all the time, you are far from alone in having to deal with those issues. In fact, according to the American Sleep Association, between 50 and 70 million adults in the United States have some form of sleep disorder that prevents them from getting an adequate amount of rest. Per 2020 recommendations from the National Sleep Foundation, healthy adults need between seven and nine hours a night.

While many people may be aware that they're not getting as much rest as they should, few are aware of just how serious their sleep deficit may be. According to a study conducted at the University of Chicago, people tend to vastly overestimate how much sleep they're actually getting, with study participants averaging about 7.5 hours in bed, but just 6.1 hours sleeping.

And although a lack of sleep may be a major contributor to your persistent fatigue, it's not the only possible culprit. In fact, there are a wealth of factors that can contribute to those bleary-eyed days and exhausted nights. If you're fighting an uphill battle against a seemingly-unshakable sleepiness, discover these 23 reasons you're tired all the time. And to set the record straight on some things you may have heard about getting a good night's rest, check out 25 Myths About Sleep That Are Keeping You Up at Night.

Chances are the coronavirus pandemic has your stress levels soaring through the roof even more than they already were. And while, in some instances, stress can make you feel almost jittery, it may also be one of the reasons you're tired all the time. According to the results of a study published in BMC Psychiatry, stress—particularly that of the work variety—and fatigue are inextricably intertwined. And for more on managing everything your day-to-day entails, check out Doing These Activities for 30 Minutes a Day Makes You Happier, Study Finds.

2
You're not getting enough exercise.

If you're feeling fatigued throughout the day, a little exercise may be exactly what you need to bounce back. The results of a study conducted at Seattle's Fred Hutchinson Cancer Research Center reveal that older women who increased the amount of exercise they got during daylight hours also increased their sleep duration and experienced fewer episodes of falling asleep during the day. To help you start living a more active lifestyle, check out The 50 Best 5-Minute Exercises Anyone Can Do.

The thyroid—the butterfly-shaped gland at the base of your neck—is one of those body parts people rarely think about until they realize something's amiss. However, when it comes to fatigue, a misfiring thyroid might be the reason you're struggling to stay alert throughout the day.

"An imbalance in thyroid hormones can result in hypothyroidism, which can cause fatigue," says Janette Nesheiwat, MD. So, how does one determine if their thyroid is behind their persistent fatigue? "This is found by seeing your doctor, having blood work done—and may possibly require medication."

While drinking too much water before bed may have you running to the bathroom in the middle of the night, having too little to drink can have an equally detrimental effect on your energy level.

"Dehydration, a very common cause of fatigue, can easily be corrected by drinking a sufficient amount of water and avoiding excess caffeine and alcohol," says Nesheiwat. Just make sure to slow down your consumption a few hours before bedtime and you should enjoy more restful sleep. And for more ways you're preventing yourself from restoring your energy, check out 25 Things You're Doing That Would Horrify Sleep Doctors.

5
You don't get enough vitamins and nutrients from your diet.

If you're loading up on nutrient-light junk food to keep your energy levels up during the day, you're doing yourself a disservice. "Insufficient iron, B12, and folate levels will result in fatigue as your body needs these nutrients for energy metabolism," says Nesheiwat. The good news? Combatting diet-related fatigue is simple: "Eat green veggies, lean meat, and whole grains."

6
You eat too much sugar.

If you're relying on sugary foods to help you through your energy lull, think again. As revealed by research published in the Journal of Personality and Social Psychology, people who ate high-sugar snacks felt increased energy for an hour following their consumption, only to report increased fatigue afterward.

7
You sleep with pets in your bed.

Curling up with your pet may be nice in theory, but in practice, it could be the reason for that fatigue you can't ditch. Research conducted by the Mayo Clinic reveals that individuals who hit the hay with a dog in their bed had less restful sleep than those who didn't. The good news? Keeping your pup on their own bed nearby may actually help you get better rest.

8
You keep your room too warm.

While spending time in a warm room may make you feel ready to hit the hay, dialing up the thermostat might be the very reason you're staying tired throughout the day. Researchers at the University of South Australia's Center for Sleep Research have found that people with trouble sleeping may have more difficulty regulating their body temperature during sleep, meaning that a warm room may cause those with sleep-onset insomnia to overheat, making the condition worse, and contributing to daytime fatigue.

So, what's the ideal sleep temperature? Research suggests that temperatures in the mid-60s Fahrenheit are more conducive to enjoying adequate rest. And for what you can expect in terms of your nightly rest patterns as you age, check out 20 Ways Your Sleep Changes After 40.

9
You watch TV before bed.

Watching a show or two in bed may seem like a relaxing end to your day, but using your TV, computer, or phone too close to bedtime could be the reason you can't shake that fatigue after you wake up.

According to research conducted at Rensselaer Polytechnic Institute, individuals who were exposed to blue light produced less of the sleep-inducing hormone melatonin, making them more susceptible to sleep that's poor in both quality and duration, and, as a result, tiredness.

Even if you don't realize they're doing it, your partner's snoring can be a surprising determinant of how tired you feel in the morning. Those loud noises your partner makes during sleep can easily wake you up throughout the night without you knowing it, leading to serious fatigue when it's time to wake up. And for more helpful information delivered right to your inbox, sign up for our daily newsletter.

If you want yet another reason to be extra diligent about washing your hands this winter, consider this: before you even realize you're sick, the flu could be sapping your energy. "The flu can cause fatigue," cautions Nesheiwat. "This virus infiltrates our body and requires rest, hydration, and sometimes antivirals to get better."

As a central nervous system depressant, alcohol can make you feel pretty tired, no matter when you consume it. However, the more you drink, the more likely you are to be dealing with the full-day effects of fatigue. According to a study published in Neurology, regular alcohol consumption is associated with probable REM sleep behavior disorder, with heavy drinkers hit the hardest, leading to greater fatigue after a night of tossing and turning.

That lack of iron in your diet could be a major contributor to your persistent fatigue. While some cases of anemia are mild enough to go unnoticed, for those with more severe forms of the condition, fatigue is one of the earliest tells. The good news? Doctor-approved iron supplementation and dietary changes can help improve your energy levels in no time.ae0fcc31ae342fd3a1346ebb1f342fcb

While you may have imagined that your risk of catching mono was almost nil after your college years, that's far from the case. In fact, this common ailment could be the reasons you're always tired. "Infections are also a very common cause of fatigue," says Nesheiwat. "Mononucleosis, known as 'the kissing disease,' can cause extreme fatigue, [but] this usually goes away with time."

Depression can feel like enough of a burden as it is, and its side effects can only make you feel worse. One of the major side effects of depression is fatigue, and can make the condition even less bearable for many of its sufferers. The good news? Treatment can help reduce the life-altering effects of both.

That burning feeling you have when you go to the bathroom could be contributing to your persistent fatigue throughout the day. In addition to infections contributing to general fatigue, UTIs can increase the frequency with which you get up to use the bathroom during the night, shortening your sleep duration and making it harder to get adequate rest.

While some prescription medications can be true lifesavers, some of those pills your doctor prescribed could be the reason behind your frequent exhaustion. Medications like antidepressants, anti-anxiety medications, pain killers, and even stimulant medications to treat ADHD can either make you tired or contribute to poor sleep, making it difficult to wake feeling well-rested.

If you're chronically exhausted but can't figure out why, it's time to ask your doctor for a blood test. When your body isn't appropriately processing the sugar in your diet, you can find yourself fighting an uphill battle against hyperglycemia, a condition that is often accompanied by unshakable fatigue.

19
You have night terrors.

Unfortunately, sometimes fatigue and sleep problems go hand-in-hand, getting you into a cycle of sleeplessness that's hard to break. Night terrors, or nightmares in which you find yourself terrified and often unable to move, can be a major contributor to daytime fatigue. Sadly, fatigue can also increase your risk of night terrors, so if this cycle has you walking around in a fog all day, it's time to consult your doctor.

Ask anyone who's done it and they'll tell you that carrying a baby is hard work. Even if you haven't had your pregnancy confirmed by a doctor, you may already be experiencing symptoms like fatigue. As your progesterone levels rise during the first trimester of your pregnancy, your exhaustion can spike as well. Later in pregnancy, your inability to get comfortable in bed and those frequent trips to the bathroom can compound the issue.

21
You have low testosterone. 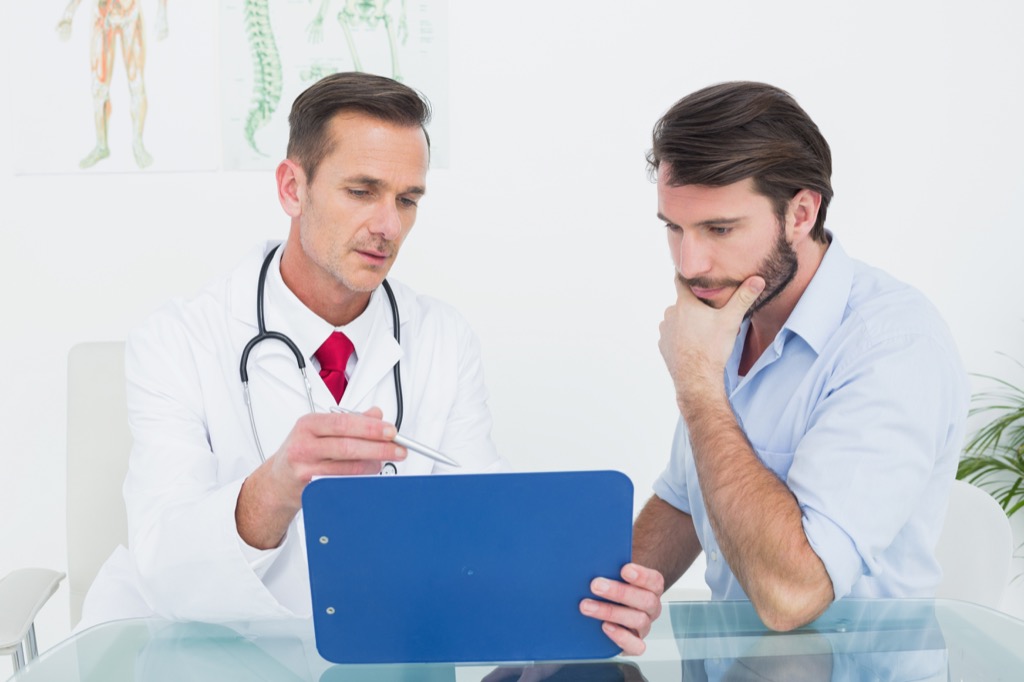 Your hormones and your energy levels are more interconnected than you might imagine. For some men, low testosterone is the culprit behind that fatigue that doesn't improve with rest. While only a physical and blood work can accurately tell you if you're dealing with diminished testosterone levels, if you're also experiencing mood changes, sexual dysfunction, and weight gain, it's definitely worth scheduling an appointment with your GP.

22
You have sleep apnea.

Sleep apnea, a condition in which you suddenly stop breathing during sleep, can be a major contributor to fatigue during daylight hours, too. And while there are some factors you can control when it comes to sleep apnea, like shedding excess weight, the condition is also associated with those you can't control, including age, sex, hypothyroidism, and jaw shape. The good news? According to the results of a study published in the journal Sleep, using a CPAP machine significantly reduced fatigue among those with sleep apnea.

23
You have restless legs syndrome.

If your legs won't stop moving long after you've gotten in bed, don't be surprised when you're seriously fatigued throughout the day. Restless legs syndrome—the likelihood of which develops with age—and comorbidities like fibromyalgia keep your legs moving involuntarily throughout the night, making it harder to get adequate rest and leaving you fatigued by the time morning rolls around.

Sarah Crow
Sarah Crow is a senior editor at Eat This, Not That!, where she focuses on celebrity news and health coverage. Read more
Filed Under
Health Advice • Sleep • Symptoms
Read This Next
Latest News
Read This Next