23 Weirdest Things You Can Be Allergic To

So that's where the rash is coming from...

According to the American College of Allergy, Asthma & Immunology, more than 50 million Americans deal with allergies every year, amounting to a whopping $18 billion of annual spending on treatment and prevention. Yes, allergic reactions are a widespread rash on American life. And while common conditions, like those from bee stings and peanut exposure, make up the majority of such cases, there are some downright weird allergies out there—some almost too bizarre to believe. Whether it's due to your own biology or to that device in your pocket, here are the strangest allergies on the planet. Nearly everybody gets grossed out by the mere thought of a cockroach, but some people are especially afraid of the household pests, seeing as they're allergic to them. According to the Asthma and Allergy Foundation of America, as little as being in close contact with a cockroach's waste (ew) is enough to set off an allergic reaction, marked by sneezing, coughing, and itchy eyes.

Ironically enough, it is possible to develop an allergy to allergy medicine. However, people who suffer from this allergy are usually sensitive to the dyes and additives found in the medicines and not the anti-allergy chemicals themselves, which means that it is possible for these sufferers to find relief with special allergy medications.

For people with cholinergic urticaria, working out—particularly in the summertime—proves to be a real pain. Whenever their skin is exposed to heat or sweat, these folks break out in itchy hives. And in severe cases, this can even lead to a case of anaphylaxis, a life-threatening allergic reaction in which the body goes into shock and stops breathing.

4
The Smell of Fish 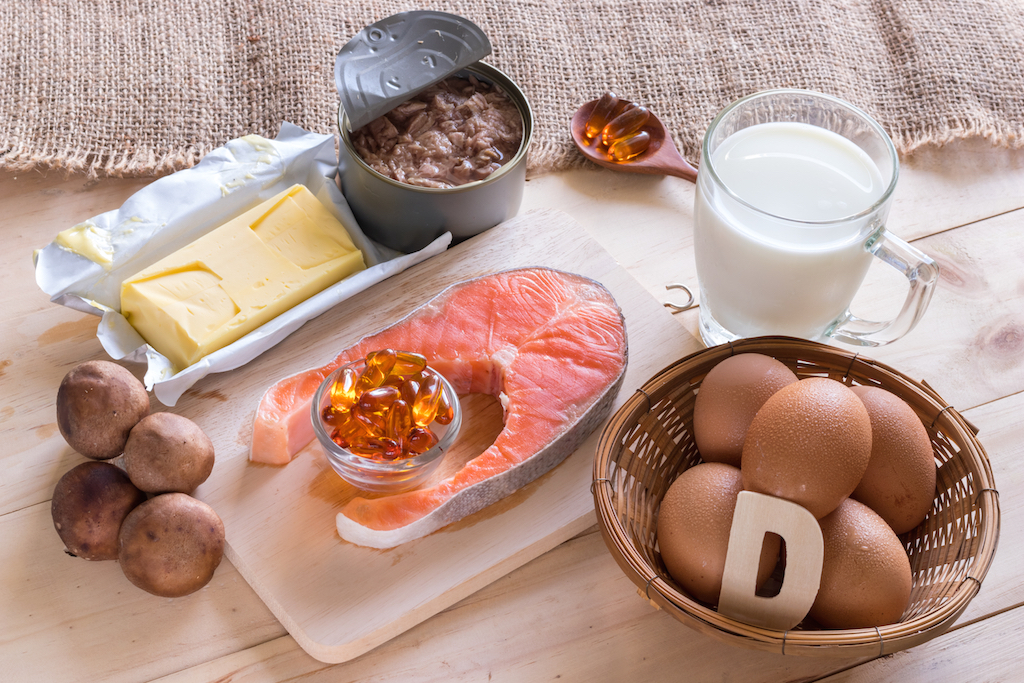 According to nonprofit Food Allergy Research & Education, one of the most common food allergies out there is finned fish, with people most often being allergic to salmon, tuna, and halibut. The allergy can range in severity, and, in some of the most extreme cases, just smelling fish is enough to trigger a reaction; as a fish cooks, the proteins (wherein lie the allergens) can transmit through the air.

Apologies to the Funky Bunch, but, for some people, vibrations are anything but good. For people who suffer from a condition known as vibratory urticaria, coming into contact with something that's vibrating—a lawnmower, a motorcycle, a mountain bike—can cause swelling, itching, headaches, and blurry vision. Luckily, this allergy is so rare that, according to the U.S. National Library of Medicine, the number of people afflicted with it is still unknown.

Nowadays, it's almost impossible to survive without your smartphone by your side—unless your phone is causing serious irritability, that is. Unfortunately, this is the case for people who suffer from a nickel allergy, seeing as many electronics are made with the metal. Rashes from a nickel allergy generally take a few hours to days after exposure to show up, according to the Mayo Clinic, so it can be hard to tell whether or not a smartphone is the culprit. If you find yourself waking up with random rashes, you may want to steer clear of touching your phone (or loose change, since that's also made of nickel) for a few days. And no, cases won't save you here: those who suffer from the allergy report reactions even from just touching the glass.

Most people exit a scorching bath with lobster-red skin, but for someone with aquagenic urticaria—or a water allergy—such is the case with every bath and shower, regardless of temperature. Once a person with aquagenic urticaria removes themselves from the water, their hives will fade within the hour—but should they come back into contact with a water source, their symptoms will start up all over again. And it's not just the shower that will cause an allergic reaction—going swimming, getting caught in a downpour, and even something as innocuous as doing the dishes will also cause a flare-up. (Wear gloves!) 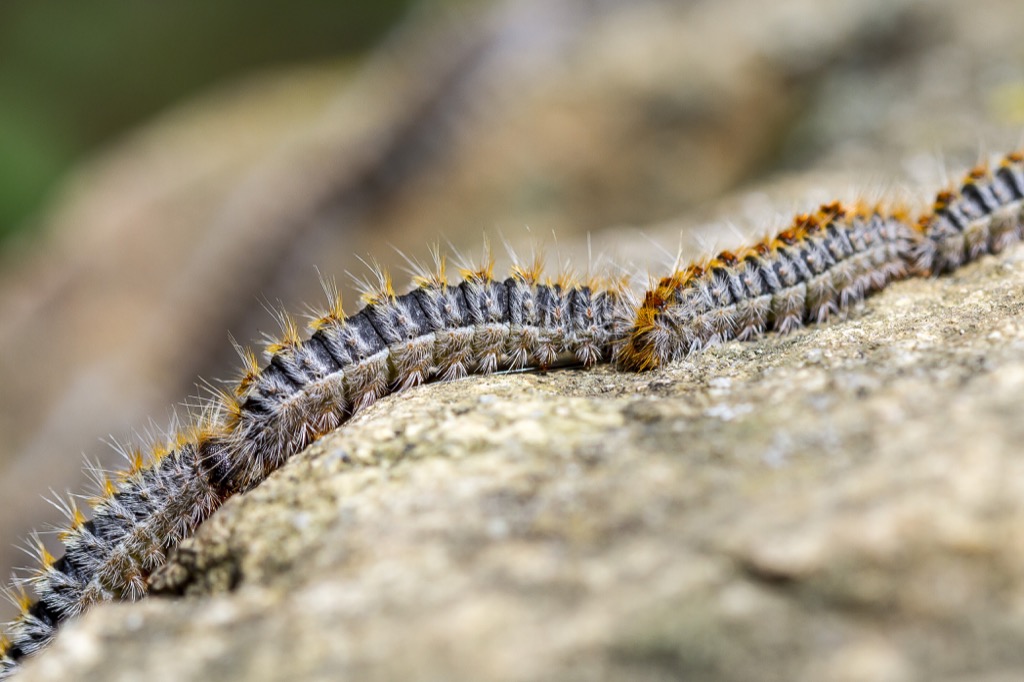 You might not see fuzzy caterpillars crawling around often, but the creatures are out there, and they're dangerous. According to one study published in The Scientific World Journal, one species of fuzzy caterpillars in particular, called the pine processionary caterpillar, "causes dermatological reactions in human by contact with its irritating larvae hairs." And you don't even have to actually touch the caterpillar to develop a reaction, seeing as their hairs can travel through the air and find you.

As if carrying a baby for nine months isn't excruciating enough as it is, there are some moms-to-be out there who also have to deal with a painful pregnancy-related skin allergy called pemphigoid gestationis. This autoimmune disease, which usually manifests during the second or third trimester, causes itchy bumps and blisters on the abdomen that spread to other parts of the body.

Some allergy triggers, like dog hair and shellfish, are relatively easy to avoid, but one allergy that's almost impossible to steer clear of is sunlight. People with solar urticaria can take medications to control their symptoms, but if left untreated, exposure to sunlight can cause everything from a skin rash to nausea. And even if you don't have a sun allergy, here are the 20 Ways a Sunburn Harms Your Overall Health. 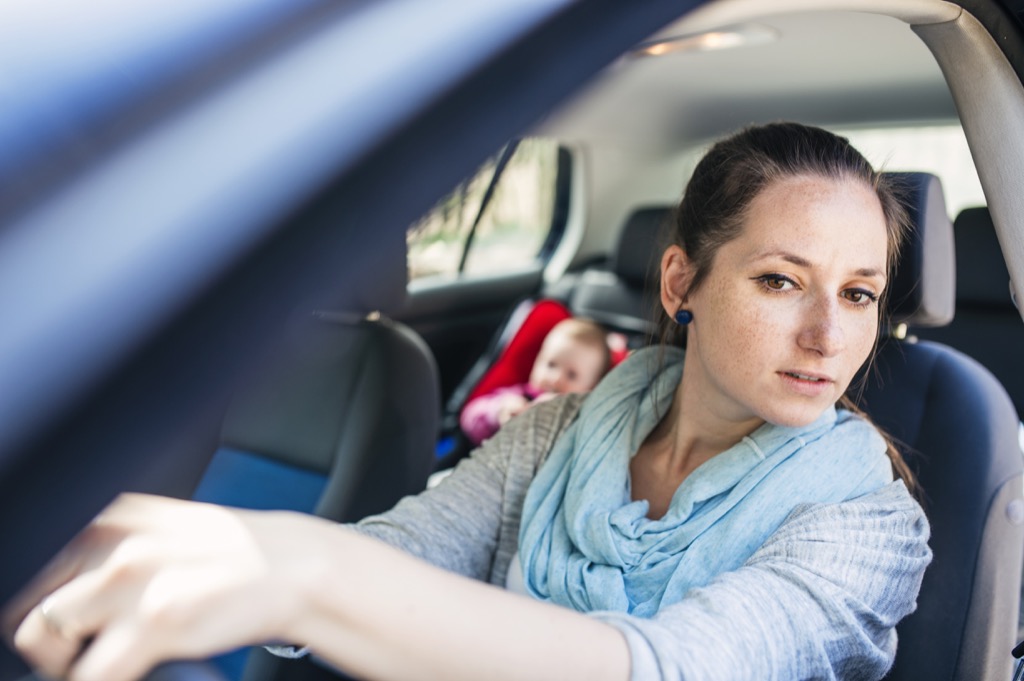 A growing number of people are making trips to the doctor's office claiming to have electrosensitivity, or an alleged sensitivty to electromagnetic fields. Though no scientific studies have been done to prove that such a condition exists, people who claim to be electrosensitive supposedly experience headaches, painful rashes, and runny noses when they come into contact with things like cars, cellphones, and microwaves. 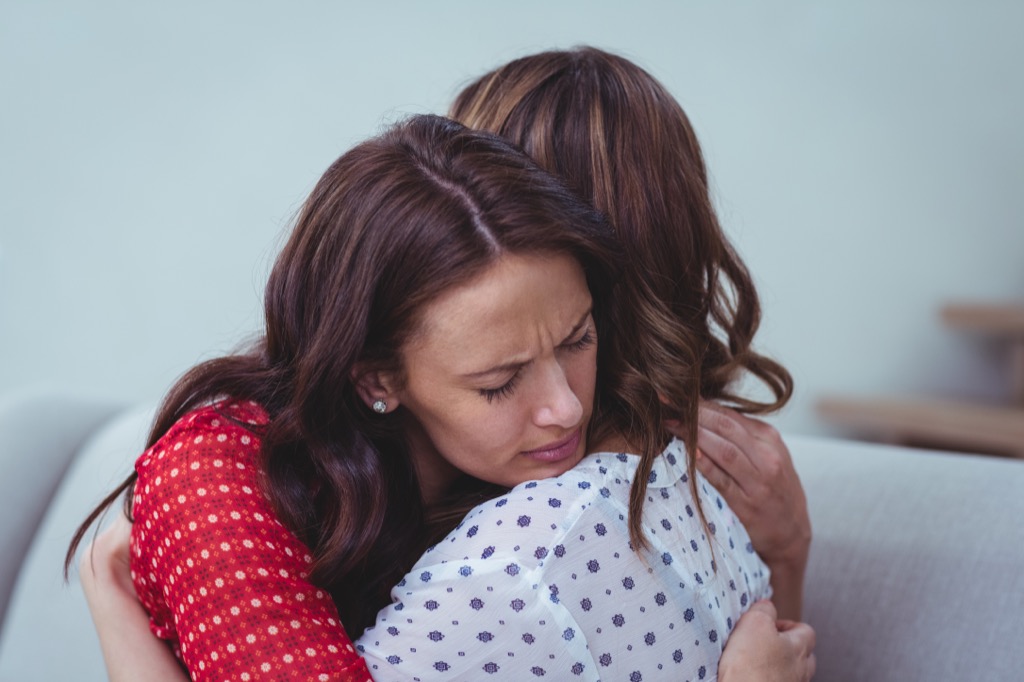 For people with dermatographia, so much as a light scratch becomes a raised red line and causes the skin to swell and welt up, kind of like what someone with a feline allergy would experience after getting scratched by a cat. According to Healthline, approximately five percent of the population suffers from dermatographia, though many people with the allergy don't ever seek medical treatment. 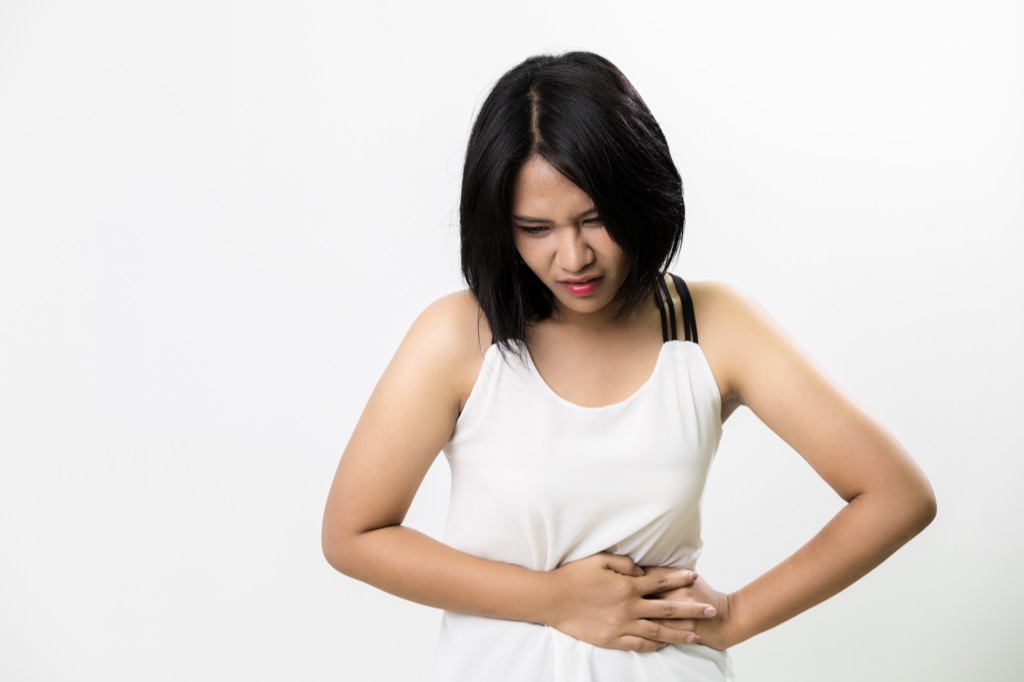 It's relatively normal for a woman's time of the month to be accompanied by cramps, moodiness, and uncomfortable bloating, which makes menstruation quite the dreaded occurrence. But for a select few woman, those few days every month are especially loathed, seeing as their autoimmune progesterone dermatitis (APD) causes them to break out in hives and swell beneath the skin. Evidently, APD is not caused by the period itself, but by the rise in female hormone progesterone during the second half of menstruation. 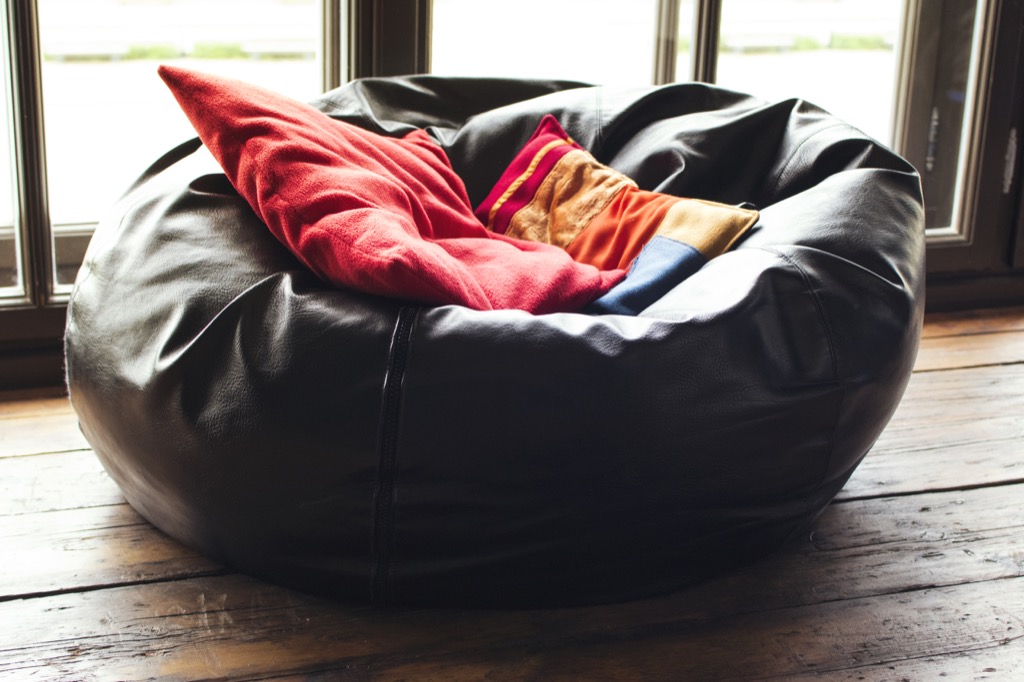 People with a soybean allergy know better than to ingest the legume, but there are other surprising ways in which this allergy can be triggered. For instance, one case study published in the Annals of Allergy, Asthma & Immunology reported that a six-year-old with a soybean allergy suffered from mild respiratory distress due to none other than a beanbag, which is filled with dry soybeans. Stick to chairs, folks.

If you have a known mold allergy, then be careful about consuming old pancake mix—or any old dry mixes, for that matter. According to a case study published in the American Journal of Forensic Medicine & Pathology, one man suffered anaphylactic shock and died after eating two-year-old pancake mix, seeing as the dry mix was tainted with mold.

Mica, a natural mineral that easily flakes apart to become the glitter we use to craft, is a common allergen that irritates the skin. And if you find that you're allergic to this mineral, be careful about the foundations and powder products you're using, because it's also found in many mineral makeups.

Some people are allergic to certain produce (eggplant, tomatoes) no matter what, and other people are only allergic to fruits if they are raw and pollinated. These latter folk suffer from oral allergy syndrome, which occurs when the proteins in a raw fruit or vegetable cross-react with pollen. Fruits that commonly trigger this allergy include apples, celery, melons, peaches, and bananas.

Most condoms on the market today contain traces of latex, which many people are allergic to. For the most part, exposure to latex for these individuals results in little more than an irritating rash, but it can cause severe anaphylaxis in extreme cases. Thankfully, there are alternatives on the market. If you find yourself with the condition, consider switching to condoms made from lambskin or polyisoprene, both of which should be available at your local pharmacy.

Usually when someone says that they're allergic to wine, what they're actually allergic to is sulfites, the compounds found in red wines and dark beers that can trigger itchy eyes and a stuffy nose. Luckily, many companies are aware of this relatively common allergy and thusly have begun to brew beers and wines sans sulfites. 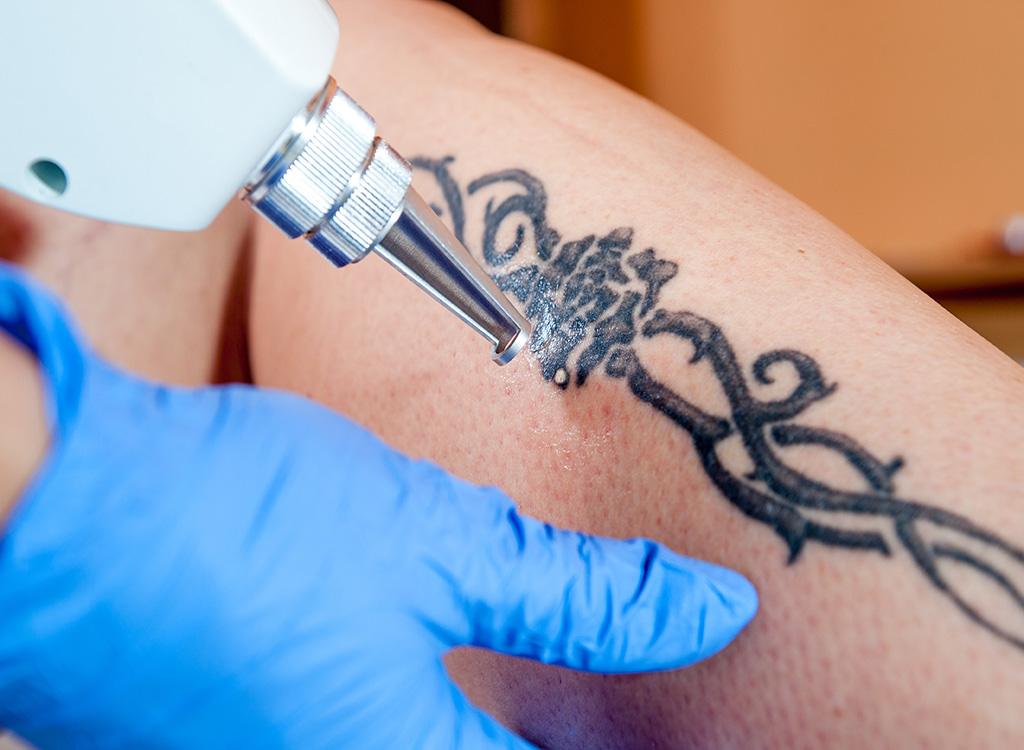 According to one study published in Contact Dermatitis, four percent of people who got tattoos experienced a short-term rash right after the process, and six percent of people had skin problems that persisted for more than four months. "The colored portion can sometimes raise up as much as a centimeter above the skin and can affect the texture of the skin," coauthor Dr. Marie Leger explained to TODAY. The dermatologist hypothesizes that allergies are at the root of most of these skin issues, seeing as two-thirds of the people who reported getting a rash had allergies, compared to just one-third of the people who healed normally. And if you're in the market for your first tattoo, check out these 100 Amazing Tattoos for First-Timers.

Most people know ticks to cause Lyme disease, but few people are aware that a certain type of tick—the Lone Star tick—can also cause its victims to develop an allergy to red meat. According to research in JAMA, these ticks make their victims allergic to the alpha-gal carbohydrates found in cows, pigs, and other game by biting an animal with the carbohydrate and subsequently biting a human, whose body then produces antibodies in response. Henceforth, every time the bitten human eats red meat, this antibody response is triggered. These ticks are especially prevalent in the Southeast to the Eastern United States, and they can cause the allergy even in people who have eaten pork and beef for their entire lives. 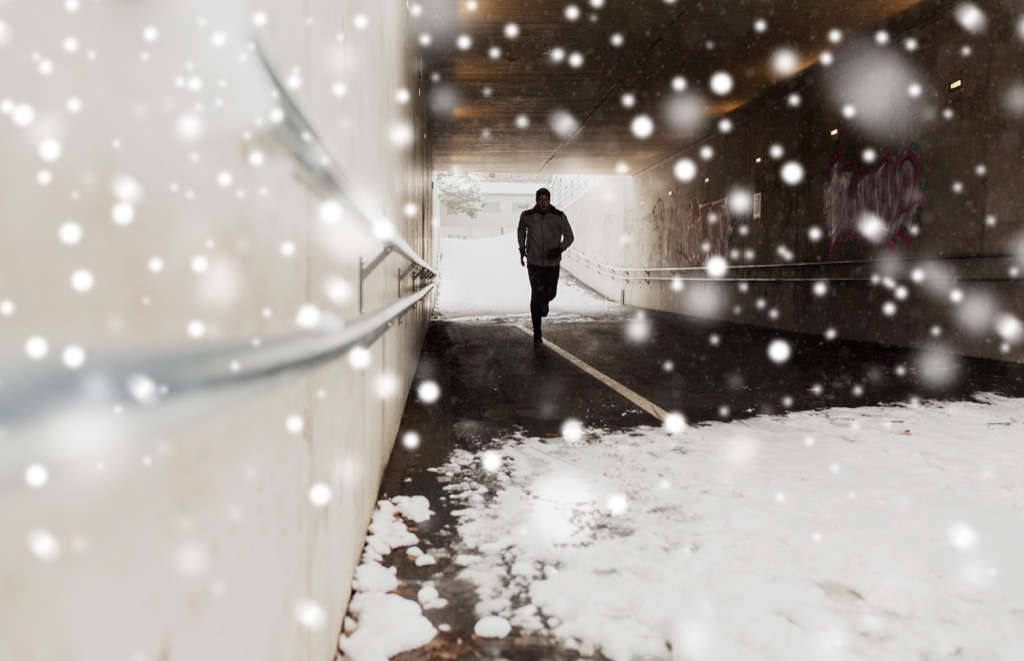 Known as cold urticaria, this allergy is triggered when the body experiences a sudden drop in temperature. Doctors confirm this uncommon condition by holding an ice cube on a patient's skin for a few minutes and waiting for a reaction.