She went on a diet and lost 200 pounds of pure dude.

Miranda Baker, 18, is a student at Iowa State University who is here to school the Internet on how to deal with terrible men.

Last Saturday, she attended a football game and, later, a formal, with her boyfriend, whose name she's graciously not giving away so let's just call him S. Miranda had met S at a frat party (ugh) five weeks beforehand, so the relationship was pretty fresh. By that evening, the relationship was dead, as Miranda called it off after S. called her "disgusting and unattractive" at the formal. Instead of crying, Miranda got up and left to join her friends.

Then she did one better. On Sunday morning, she put up a couple of "before and after" photos, in which she boasted about losing 200 pounds. You click on the photos expecting, as usual, to see a photo of a heavyset woman on the left and a photo of the same woman noticeably slimmer on the right. But then you realize she's not talking about weight loss. She's talking about the guy. LOL. 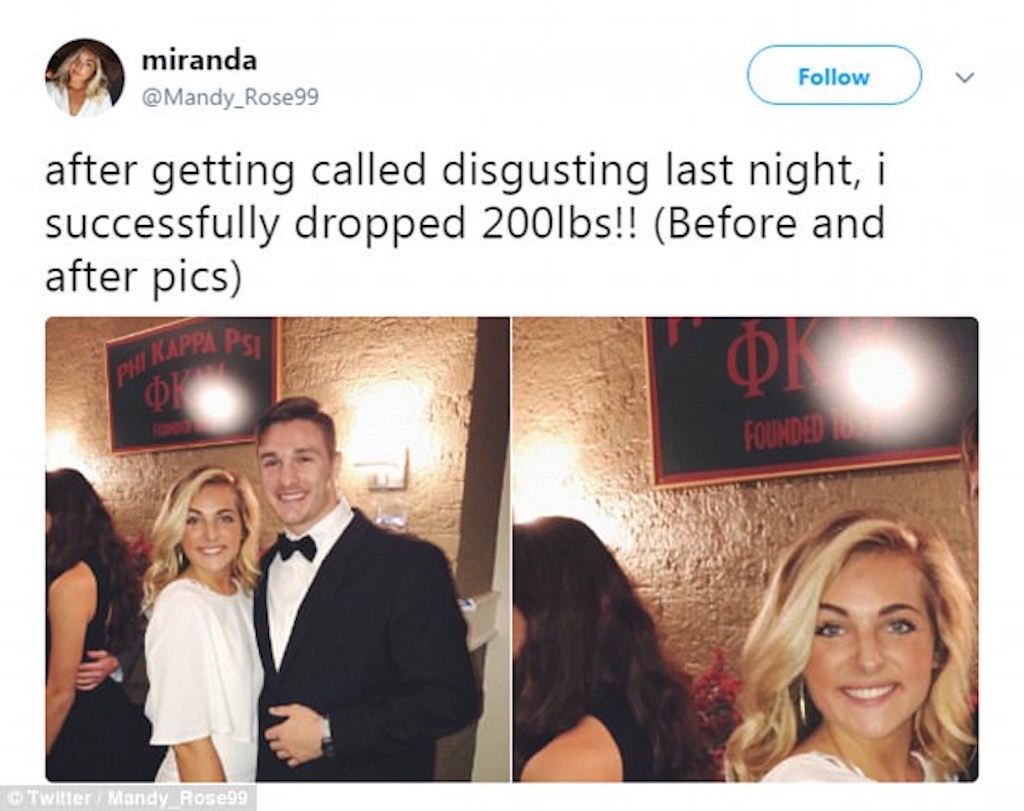 This tweet quickly went wildly viral, amassing 31,000 retweets and 283,000 likes in under 24 hours, much to Miranda's surprise.

"I asked my friend if I should do it as a joke, just thinking a few people would see it," she said. "I did not expect it to get this big."

Obviously, her former beau was not impressed.

"He wanted me to take it down, but then I started getting messages from girls from his hometown telling me how disrespectful he is to woman. He's cheated on all of his girlfriends more than once. I've gotten messages from over 25 people telling me consistently terrible stories about him."

So, needless to say, a reconciliation is not in the works.

"He needs to get his act together before he talks to any girl and learn how to treat them right."

As surprising as it was, Miranda hopes that the tweet will inspire other young women to not let men ever affect their self-esteem.

"I want women to know that they deserve only the best. If a man makes you question your self-worth, he is not the right man for you. He should make you feel wanted and appreciated every day."