Doing This When You Talk Could Be an Early Alzheimer's Sign, Study Warns

These subtle speech changes could be an early warning sign.

Right now, nearly six million Americans are living with Alzheimer's disease (AD), the most common form of dementia. By 2060, that number is expected to skyrocket to 14 million individuals, warns the Centers for Disease Control and Prevention (CDC). And while there's currently no cure for Alzheimer's, there are interventions which may help ease its symptoms and slow its progression—especially if they're implemented early. Read on to learn which two verbal cues could tip you off to early Alzheimer's, and why a new type of testing could help screen for these early signs of cognitive decline.

READ THIS NEXT: Doing This at Night May Help You Ward Off Dementia, Study Says.

Language changes are common in people with Alzheimer's.

A wide body of research suggests that changes in language are an important indicator of Alzheimer's disease in all of its stages. "Alzheimer's disease is characterized by progressively worsening deficits in several cognitive domains, including language," explains a 2013 study published in the journal Clinical Interventions in Aging.

In fact, the researchers say that "worsening language abilities, or aphasia, has been suggested to have more clinical relevance than other domains, such as memory, orientation, and reasoning, in progression from the moderate to severe stages of AD," the study says. The researchers add that "language impairment is a significant issue in most patients as they pass through moderate into severe disease stages," and say that it is an "important characteristic" even in the earliest stages.

READ THIS NEXT: If Your Handwriting Looks Like This, You Could Have Early-Onset Alzheimer's.

Two verbal changes in particular are linked with the early stages of Alzheimer's disease, as explained in a 2018 study published in the journal Frontiers in Aging Neuroscience. "What we've discovered here is there are aspects of language that are affected earlier than we thought," said Sterling Johnson, PhD, one of the study's authors from the University of Wisconsin-Madison.

In particular, researchers found that those with a family history of Alzheimer's who showed early signs of cognitive impairment were significantly more likely to use filler words such as "um" or "uh," and pepper their speech with pauses. In the future, speech analysis tests that look for these particular patterns may help experts screen for signs of mild cognitive impairment, while Alzheimer's is still in its early stages.

Here's how the study was conducted.

The Wisconsin study was the largest study on speech analysis as it relates to Alzheimer's disease to date, the AP reports. To probe the link between language patterns and Alzheimer's, the team conducted a picture-description test on 400 subjects who did not have any known cognitive problems. Among this group, they observed no notable changes in verbal skills over time.

They then tested 264 people on the Wisconsin Registry for Alzheimer's Prevention, a study of individuals in their 50s and 60s, who were considered to be at higher risk for Alzheimer's due to family history of the disease. Of those 264 people, 64 were already showing signs of early cognitive decline at the time of testing. The team observed that this group demonstrated reduced fluency in their language: they used more pauses, increased their use of filler words, and used more pronouns for objects, such as "it" or "they," rather than naming the object specifically. They also tended to speak in shorter sentences, and took longer to relay their thoughts than the control group.

These changes can resemble normal signs of aging—with one key difference. 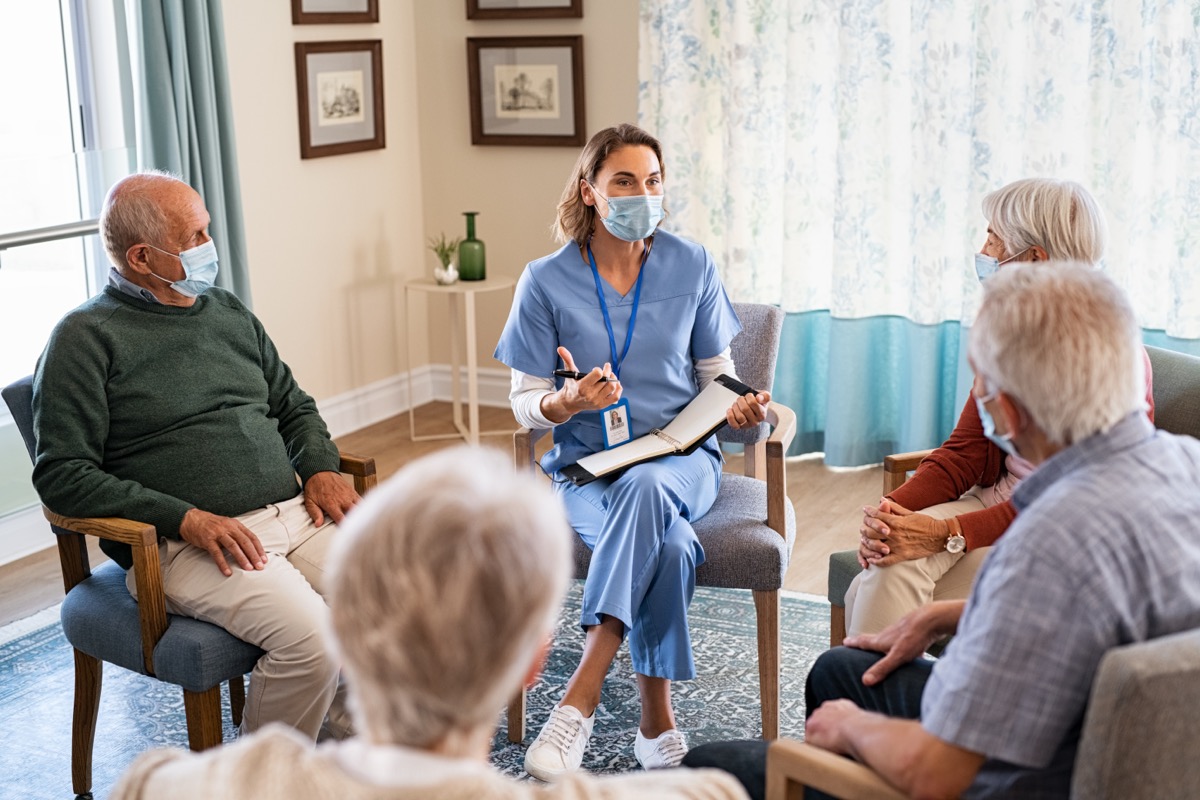 "In normal aging, it's something that may come back to you later and it's not going to disrupt the whole conversation," another study author, Kimberly Mueller, PhD, explained prior to the study's publication at the Alzheimer's Association International Conference in London in 2017. "The difference here is, it is more frequent in a short period."

Speak with a doctor if you notice these types of persistent changes in your speech—especially if you suspect they worsen over time, or if they interrupt your ability to communicate effectively.