From hives to headaches, this common illness can crop up in surprising forms.

Though the flu shares many symptoms with the common cold, the former can be much more dangerous and debilitating. According to the CDC, 185 flu-related pediatric deaths were reported during the 2017-2018 flu season, and nearly 30,500 people were hospitalized last season as a result of the flu.

By now, most people know the major flu symptoms to look out for—coughing, nasal congestion, fever—but there are also a surprising number of other symptoms that you should be aware of as peak flu season approaches. After all, if you know what to look for, it's much easier to prevent the flu from turning into something worse. 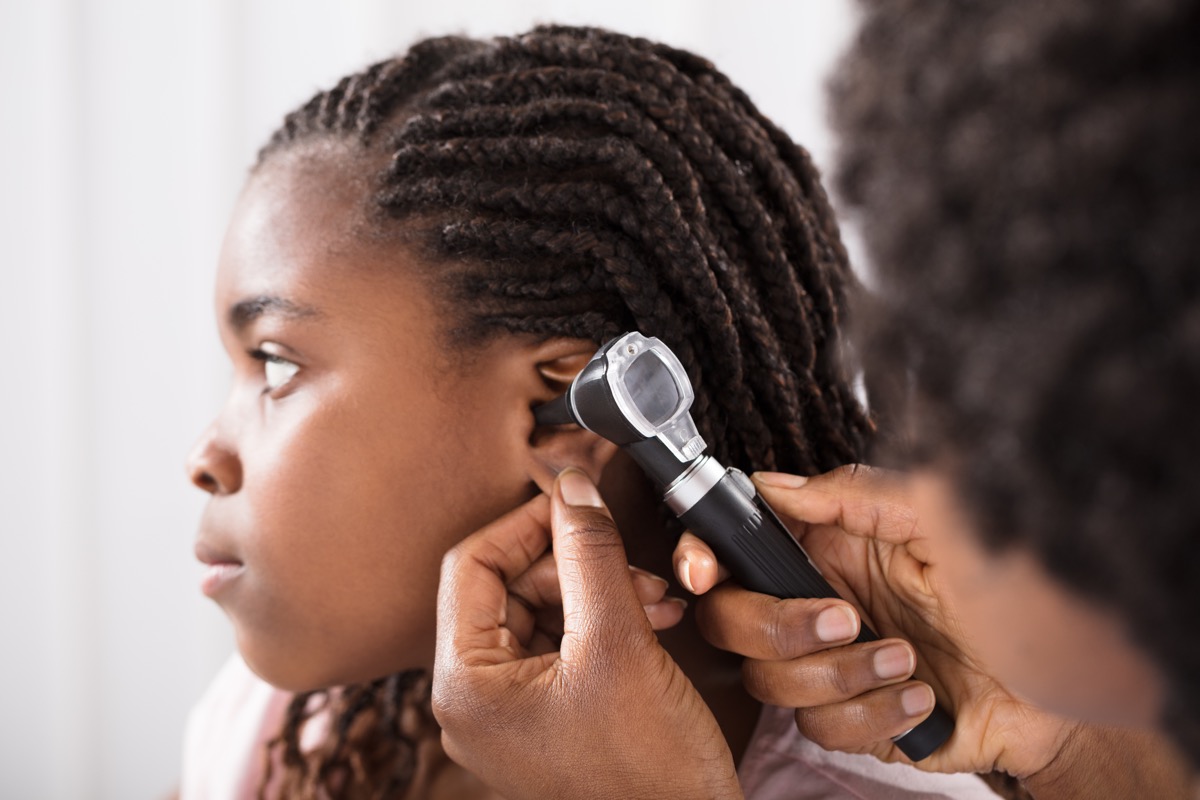 One of the complications that can arise as a result of the flu, in children and adults alike, is an ear infection. This painful condition is one of the most common flu-related complications—and the longer you wait to seek treatment for the flu, the more likely you are to suffer from other related health issues.

According to the Centers for Disease Control and Prevention (CDC), one of the surprising flu symptoms that can occur with children is their skin turning a bluish tone. This severe symptom occurs when there is not enough oxygen in the bloodstream. Any child experiencing this kind of discoloration should be taken to the emergency room immediately.

The flu manifests in many different ways, and believe it or not, it can even affect your mental state. According to the American Academy of Family Physicians, in serious cases, the flu can cause confusion and scattered thoughts, especially in elderly individuals.

Per the CDC, another serious symptom of the flu is pain or pressure in the chest. Often times this is an indication that the flu has caused a chest infection, like bronchitis or pneumonia, especially when the pain is accompanied by increased couching, difficulty breathing, and a high fever.

During last year's flu season, a mom in Nebraska named Brodi Willard brought to light a surprising flu symptom: hives. When Willard's son came home from school one day with the painful rash, Willard tried doing everything she could to get rid of it with no luck. Eventually, she called her son's pediatrician, and it was then that she found out that two other kids had come in with hives, both of whom later tested positive for the flu. When her son was tested, it also turned out that he had the flu.

She posted on Facebook to warn other parents of the often unreported symptom. "He has had no symptoms. No fever, no cough, and no runny nose. He only has hives," she wrote.

According to the Mayo Clinic, chills often accompany the more well-known flu symptoms, like a sore throat and nasal congestion. Since you usually won't get the chills when you come down with the common cold, this symptom is generally a sign that you're suffering from the flu and that you should take it easy for a few days.

One of the symptoms that the common cold and the flu have in common is dizziness. However, there is a little bit of good news when it comes to this not-so-fun flu manifestation: According to the University of Michigan's medical department, "home treatment … will relieve lightheadedness."

Unfortunately, many people suffering from the flu will end up experiencing some sort of muscle pain while under the weather. This is because the flu "leads to an increase in the expression of muscle-degrading genes and a decrease in expression of muscle-building genes in skeletal muscles in the legs," explains Laura Haynes, a researcher who studies immunology at the University of Connecticut School of Medicine. While healthy adults are able to fully recover from this symptom, Haynes noted that "these effects can linger significantly longer in older individuals."

Though it's uncommon, the CDC notes that the flu can cause children and even sometimes adults to spend a lot of time in the bathroom with vomiting and diarrhea.

It's not uncommon to lose your appetite while dealing with a bout of the flu. "When we're sick or ill… our bodies mount a complex inflammatory response," Dr. Donald D. Hensrud, M.D., MPH, chair of the Division of Preventive, Occupational and Aerospace Medicine at Mayo Clinic, explained to HuffPost Healthy Living. "As part of this response, we produce chemicals called cytokines, which have a wide range of effects and are partly responsible for the decreased appetite."

Whereas the common cold can cause your eyes to water, the American Academy of Family Physicians says the flu actually goes one step further and irritates them to the point that they're in pain, thanks to all the congestion. 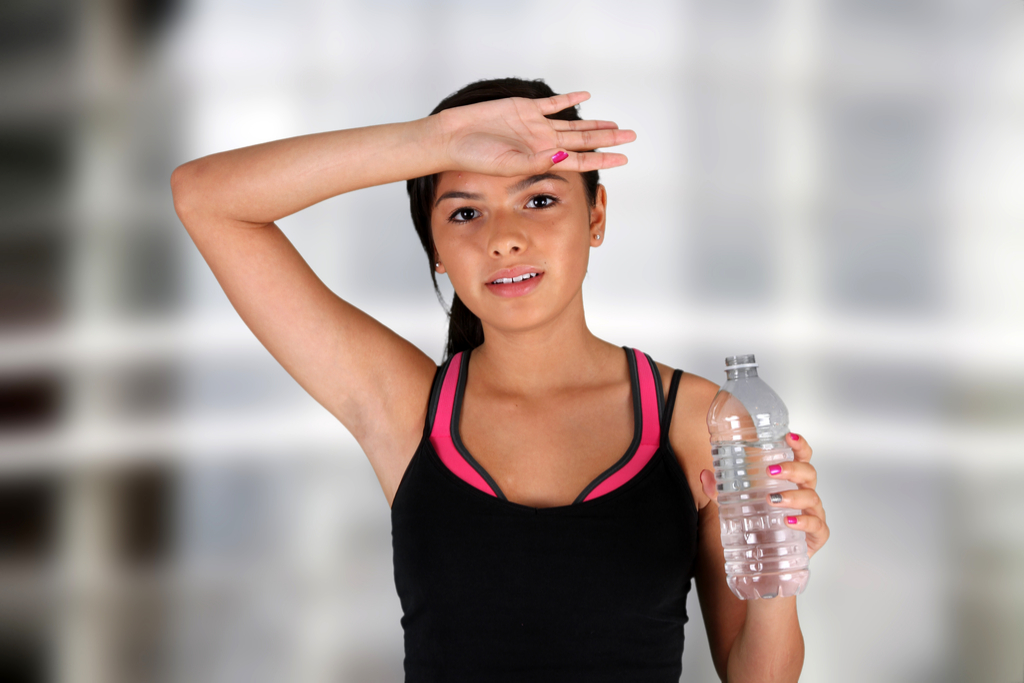 When you have a fever, one of the ways in which your body works to return to its normal temperature is by sweating. And seeing as most people with the flu come down with a fever, excessive sweating is also a symptom associated with the illness.

When a case of the flu develops into pneumonia, you may see blue discoloration in your fingernails. This symptom is a sign that something is seriously amiss—and you should head to the hospital right away.

Thanks to all that flu-related congestion, another symptom that you might experience is hearing loss. Thankfully, this symptom is almost always temporary. But if you find that it persists long after your other symptoms are gone, then you should definitely get your hearing checked for potential long-term damage.

For people with asthma, the symptoms of the flu are hard—if not impossible—to ignore. According to the CDC, the respiratory issues associated with the flu can worsen asthma attacks and asthma-related breathing problems, making the flu especially hard to cope with for those with this pre-existing condition.

Myocarditis, or an inflamed heart muscle, is a rare complication of the flu that, if left untreated, can become fatal. Though anyone can develop this complication, elderly folks and people with preexisting heart conditions are more at risk. 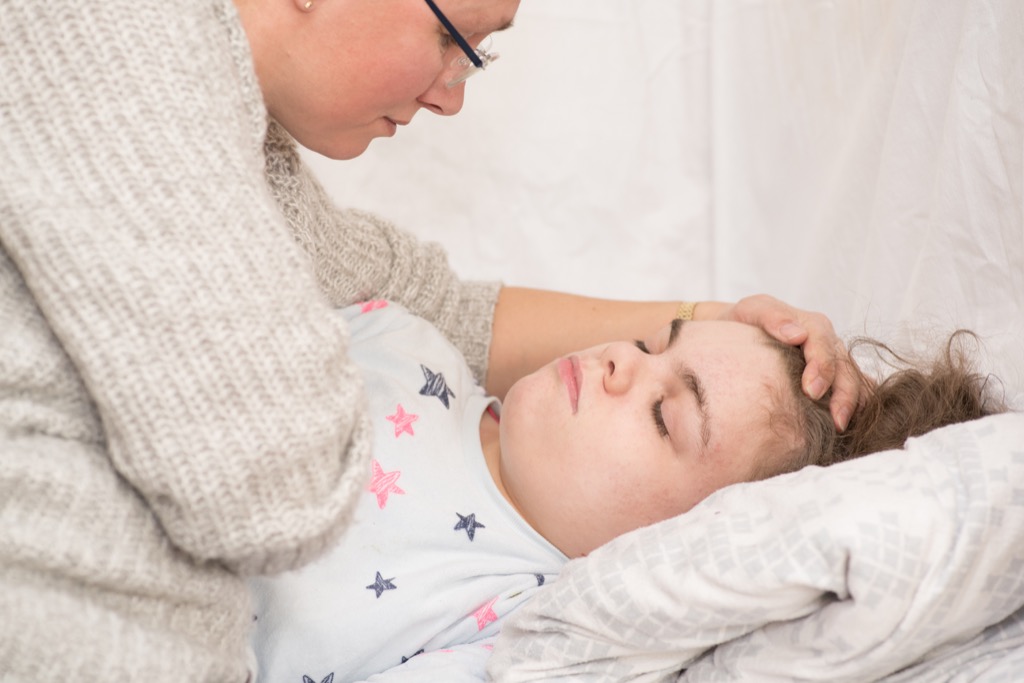 Various studies have found links between influenza and neurological issues. One meta-analysis published in Industrial Psychiatry Journal found that febrile seizures—convulsions in children caused by a spike in body temperature—are often seen in kids with the flu. 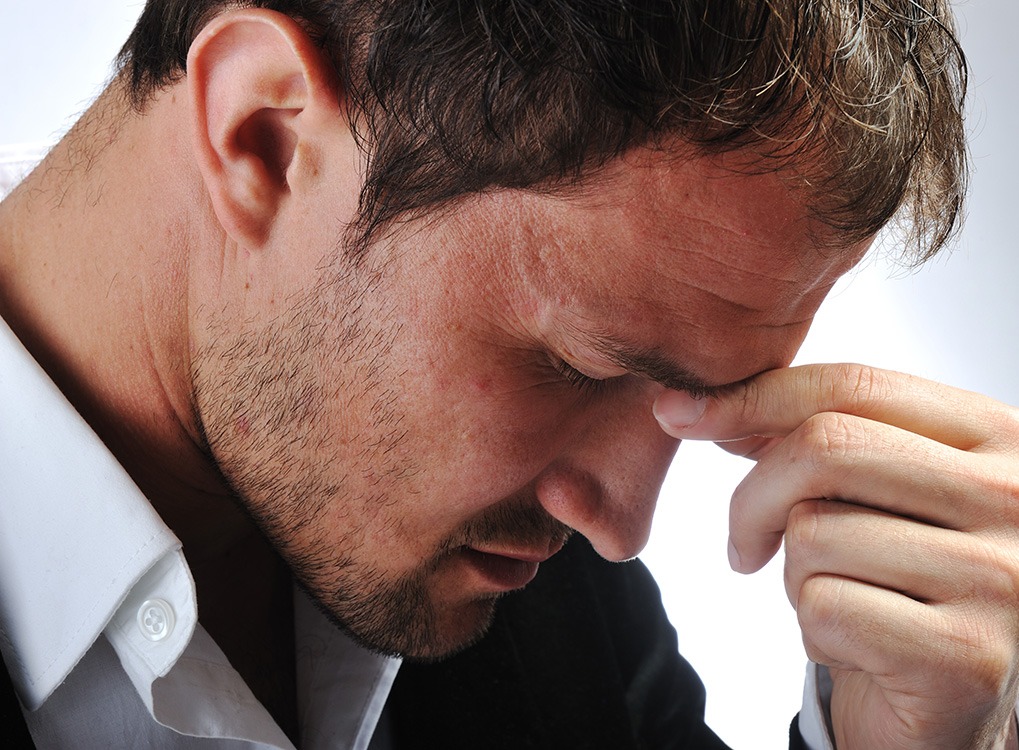 Make sure to stock up on ibuprofen during flu season. One of the most persistent—and most aggravating—symptoms associated with the winter illness is headaches, and these don't tend to go away until the virus is totally out of your system.

Because the body has to work overtime to fight the flu, people under the weather often find that their illness has them feeling especially tired, both physically and mentally. Instead of fighting this fatigue, doctors recommend getting as much sleep as possible while you recover so that your body can heal.

Since babies can't communicate with words, it's important to learn the signs and symptoms that indicate a serious case of the flu in a child. Per the CDC, one of these symptoms is irritability, especially when it gets to the point that "the child does not want to be held."