These Are All the Cancer Warning Signs Hiding in Plain Sight

A common ailment might be more serious than you think.

While staying safe from coronavirus is likely your first priority right now, it's important not to ignore the symptoms of other serious health issues. Approximately 40 percent of men and 39 percent of women in the United States will battle cancer in their lifetimes, according to the American Cancer Society. Given those odds—and the fact that the disease becomes exponentially more difficult to treat as it spreads—it's critical to be able to spot early cancer warning signs when they appear.

Fortunately, while "every cancer type will have its own specific symptoms, most will share some common signs," says Karen Selby, RN, a patient advocate at The Mesothelioma Center in Orlando, Florida. The only problem is, those symptoms are not specific to cancer, so they can appear under the guise of numerous other conditions and infections. To help you get educated about early indicators of the disease, we've compiled a list of the common cancer warning signs.

Though headaches are an extremely common ailment, a persistent headache—especially one that causes vomiting and doesn't respond to typical treatment—may be a sign of a brain tumor or cancer of the spinal cord, according to the American Cancer Society.

Another brain tumor symptom to watch out for is "loss of power or sensation in some part of the body," says Laurence Gerlis, GMC, CEO and lead clinician of SameDayDoctor. And to hear from those who've survived the disease, check out 19 Cancer Survivors Reveal the Symptoms That Saved Them.

It's perfectly normal to be tired after a long week. What's not normal is feeling tired for no discernible reason, no matter how much sleep you get. When that's the case, Gerlis warns your tiredness could be a sign of cancer. If your fatigue is getting in the way of your everyday life, make an appointment with a doctor ASAP.

While there are many things that cause night sweats—including nightmares, low blood sugar, and hyperthyroidism—waking up with soaked sheets may also be one of the signs you have cancer. According to pediatrician and dermatologist Tsippora Shainhouse, MD, this is one of the "non-specific signs that can signify an internal cancer." So if your night sweats occur in combination with any other cancerous symptoms, they should be brought to a doctor's attention immediately. And for types of the disease that are becoming more common, check out 10 Types of Cancer That Are on the Rise.

Swelling of the lymph nodes in your neck, armpit, or groin can be a sign of many things, most commonly an infection. However, according to Shainhouse, it can also "indicate a new blood cancer like leukemia or lymphoma." It can be difficult to determine the underlying cause of swollen lymph nodes, but if the swelling is accompanied by another cancer warning sign—such as fever or weight loss—it's crucial to have a doctor evaluate you.

"Skin cancer may present as a mole that changes in shape or color and [that] may itch or bleed," says Gerlis. A melanoma growth will often be asymmetrical, have an irregular border, and may be multiple colors. When inspecting a mole, follow the American Cancer Society's ABCDE rule, meaning you should be looking for any asymmetry; irregular border, color, or diameter; or any mole that is evolving.

According to the Cleveland Clinic, an estimated 40 to 50 percent of fair-skinned people who live to the age of 65 will develop skin cancer in their lifetime. Fortunately, due to the disease's topical nature, it's often recognized and can therefore be treated before it's too late.

So what should you look out for when it comes to skin cancer? According to Daniel Atkinson, clinical lead at Treated.com, "cuts, sores, or blemishes that do not heal or only partially heal" can indicate cancerous cells. Even if your sore is painless, head to the doctor if it fails to heal within a week or so. And for more education on the disease, check out 17 Things People Never Tell You About Having Cancer.

Like many diseases and infections, most cancers will lead to a fever at some point. And, according to the American Cancer Society, certain cancers like leukemia and lymphoma can cause fevers even in their early stages. These fevers are often recurrent, so if a fever lasts for longer than three days or is continuously coming back over a period of weeks, it's time to see your doctor. 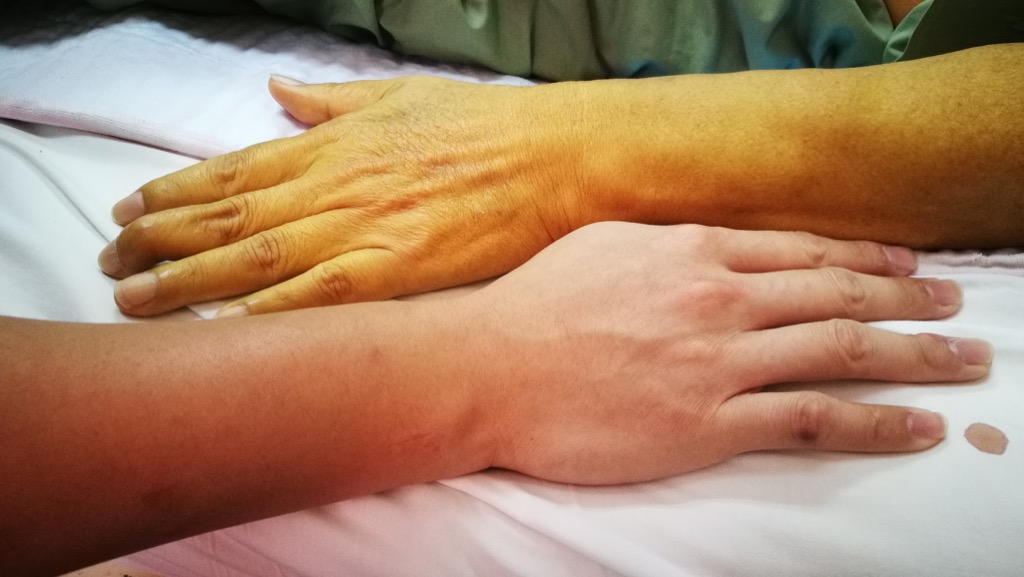 Jaundice is a common symptom of many cancers, says Latisha Rowe, MD, founder of The Rowe Network. This symptom presents as "a yellowing of the eyes and the skin, and usually occurs because the cancer has spread to the liver."ae0fcc31ae342fd3a1346ebb1f342fcb

If you feel dizzy to the point that you can't function properly, you need to see a doctor stat. Rowe explains that "cancers that affect the brain can cause neurological symptoms like dizziness and passing out."

Colon cancer can cause abnormal bowel movements and even dark stools, says Rowe. Unfortunately, though, this is one of the subjects a patient is less likely to discuss with their physician.

According to the Mayo Clinic, most colon cancers do not begin to show symptoms until the later stages, making it all the more important to see a medical professional as soon as any suspicions arise.

If you're vigilant, you can quickly discover bladder cancer because it swiftly affects the urinary tract. In addition to bloody urine, the disease can cause a frequent need to urinate, a burning sensation during urination, and a weak stream, according to Johns Hopkins Medicine. If left unchecked, this cancer can eventually lead to a complete inability to urinate. Thus, if any of these signs present themselves, it's crucial to see a doctor sooner rather than later.

Because of its location deep in the stomach lining, stomach cancer is one of the most asymptomatic cancers—and therefore one of the hardest to detect. According to the American Cancer Society, only one in every five cases is discovered before the disease has spread to other parts of the body.

However, there are some ways to spot stomach cancer before that happens. As the tumor grows, it's likely to cause stomach pains in the abdomen just above the navel. If you experience this pain combined with other symptoms—like heartburn and changes in bowel movements—it's imperative to see a doctor.

Though most heartburn is caused by food or drink, some cases can be symptomatic of esophageal cancer, according to the Mayo Clinic. If it becomes a daily occurrence or is cropping up two or more times a week, your heartburn may unfortunately be the latter.

In addition, untreated heartburn can eventually develop into gastroesophageal reflux disease (GERD), a condition linked to esophageal cancer. According to a 2010 study published in the World Journal of Gastroenterology, about 10 to 15 percent of those with GERD develop Barrett's esophagus, which can progress into esophageal cancer.

Trouble swallowing, or dysphagia, is another common symptom of esophageal cancer, according to the Mayo Clinic. This often manifests as a feeling that something is stuck in the throat or chest, or even as the sensation of choking on food. While it may begin as a mild difficulty, the problem will get worse over time as the cancer takes up more space within the esophagus, leaving less room for food to pass.

If you're experiencing hoarseness that doesn't dissipate, you could have cancer of the throat, says Rowe. And don't wait to seek medical treatment if you're experiencing this symptom: According to Johns Hopkins Medicine, some forms of vocal cancer only start affecting the voice when they've reached the later stages.

Sudden or unintended weight loss can often be a warning sign that something is amiss. In fact, according to a 2014 paper published in the journal American Family Physician, 19 to 36 percent of unintentional weight loss is due to a malignancy, most often found in patients with stomach, pancreatic, or esophageal cancer.

It's not just unexplained weight loss that you need to worry about. Atkinson notes that "weight gain of which there is no apparent cause can be highly indicative" of several forms of cancer. The cancer that most commonly causes this symptom? Ovarian cancer.

Ovarian cancer affects one in 78 women, according to the American Cancer Society. And bloating is one of the first symptoms, says Sharyn N. Lewin, a New Jersey-based gynecologist oncologist and president of The Lewin Fund to Fight Women's Cancers. Other symptoms at the onset of the disease include "abdominal or pelvic pain, feeling full too quickly, and difficulty with urination," Lewin says. "If these symptoms are present on a repetitive basis, women need to see their gynecologists for imaging and a work-up right away."

While there are many types of gynecological cancers that can affect women, only cervical cancer is regularly screened for. Therefore, it's important to be cognizant of the signs and symptoms of uterine, vaginal, ovarian, and vulvar cancer. One of the most common—and generally ignored—symptoms of gynecological cancers is persistent genital itching, according to the Centers for Disease Control and Prevention (CDC). If the itch doesn't go away with normal topical treatments or is accompanied by thickened skin, sensitivity, or bleeding, it's time to see a doctor.

Cervical cancer was once the leading cause of cancer deaths for women in the U.S. But due to the increase of Pap smears, those numbers have diminished in the last 40 years, according to the CDC. However, there are still many symptoms of cervical cancer that go ignored. The most common? Vaginal bleeding between menstrual periods, or in postmenopausal women. Though it may be brushed off as a case of spotting, it can be a sign of invasive cervical cancer—one that needs to be addressed immediately.

Anemia—a condition involving a lack of red blood cells that can cause fatigue, shortness of breath, and lightheadedness—is a side effect of many cancers. This is because the disease often slows down the body's ability to make new blood cells and store iron. According to the American Cancer Society, certain cancers, such as those affecting bone marrow or causing blood loss, are more likely to cause anemia.