She still looks amazing at age 80.

On Monday, a very public drama erupted between NBC host Megyn Kelly, 47, and screen icon Jane Fonda, 80, that subsequently engulfed the entirety of the Internet.

While in Sundance last week to talk about the documentary "Jane Fonda in Five Acts," Fonda addressed the viral interview from last September, in which Kelly asked Fonda what she thought of plastic surgery, saying she was "stunned" by the question.

"It was so inappropriate," Fond told Variety. "It showed that she's not that good an interviewer."

On Monday, Megyn Kelly slammed Fonda for her criticism, in what many people thought was unprofessionally and unnecessarily catty way.

"For years she has spoken openly about her joy in giving a cultural face to older women," Kelly said in the now viral clip. "Well, the truth is most older women look nothing like Fonda, who is now 80. If Fonda really wants to have an honest discussion about older women's cultural face, then her plastic surgery is tough to ignore."

Kelly then played several clips in which Fonda discussed her plastic surgery openly and completely without shame. Kelly seemed to think that her reluctance to discuss the issue with her on her show was some sort of conspiracy or personal barb against her, when, in fact, Fonda made it clear at the time that she didn't want to discuss it because she was there with her co-star, Robert Redford, to discuss their film Our Souls At Night, not her looks.

But Kelly didn't stop there, as it seemed the former Fox News host was dead set on publicly humiliating her.

"I have no regrets about that question, nor am I in the market for a lesson from Jane Fonda on what is and is not appropriate," she continued. "After all, this is a woman whose name is synonymous with outrage." To prove that Fonda was offensive to the troops, she pulled up decades-old clips of Fonda controversial 1972 trip to support veterans during the Vietnam war, during which she earned the nickname "Hanoi Jane" for an infamous photograph in which she posed on an anti-aircraft gun (for which, Kelly admits, she later apologized).

Kelly's attack on Fonda was not well-received, and, if anything, it's a testament to how amazing Jane Fonda is that Kelly had to go back 45 years to find the last instance in which she did something offensive. Furthermore, it's a little ludicrous to act like Fonda's insanely good looks are wholly the result of plastic surgery. If that were the case, every actress in Hollywood over the age of 50 would look like her, instead of being one of very few older actresses who not only look half their actual age, but also look natural, as opposed to like a wax figure.

Here's some of the secrets of Fonda's age-defying appearance. And for more on looking and performing your very best, be sure to Steal the Training Secrets of Ageless Superstar Athletes.

The Aerobics Legend Is Still At It 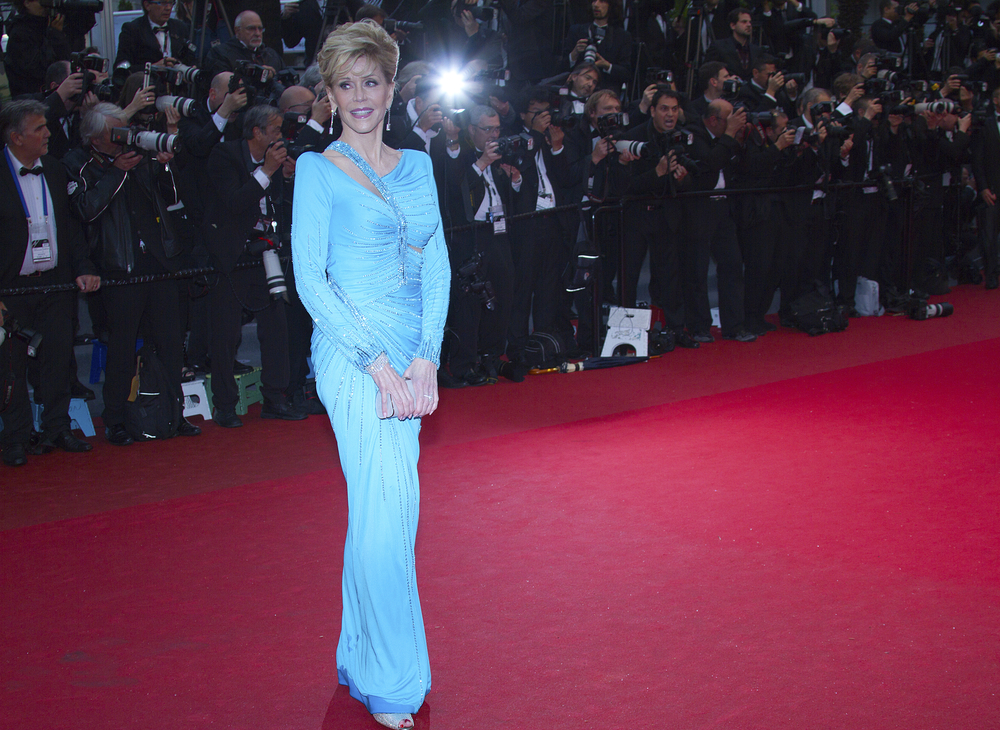 Despite the fact that Kelly said Fonda was synonymous with "outrage," a whole lot of people would say her name is actually synonymous with "aerobics." Her leg workouts, and their colorful leotards, are well-known even among today's generation, even though her first exercise video was released way back in 1982.

Today, Fonda emphasizes that maintaining a good diet/exercise regime is the key to aging gracefully, because it affects a lot more than just your waistline. "After many years, I have found no basis to advertising promises that we can have beautiful skin by using just the right skin care product," she wrote on her website, despite being a spokesperson for L'Oreal Age Re-Perfect.

"The truest, most reliable beauty potion is regular vigorous exercises combined with good nutrition…. Exercise increases the circulation and brings a rich flow of nutrients and oxygen through the blood to the skin's cells…During a workout, the skin's temperature can rise from 86 to 90 degrees or more. This is thought to stimulate an increase in the production of collagen, which, together with other positive effects of exercise, thickens the skin – making it firmer, less wrinkled and better toned."

2
Take Good Care of Your Hair, Not Just Your Skin 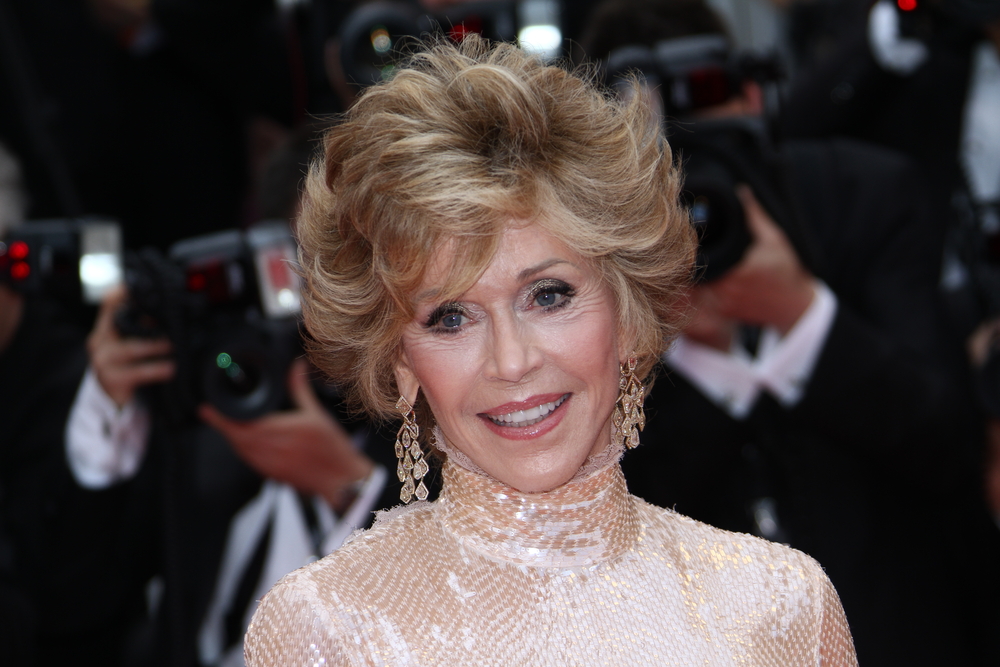 A lot of people focus entirely on their skin and forget about their hair, even though healthy hair is key to maintaining vitality. "Healthy hair always looks good, so it's important to look after your hair, she told Byrdie. "Use the right products and take care of your hair like you would your skin." And for help with that, here are 15 Top Hair Tips from Top Hollywood Stylists. 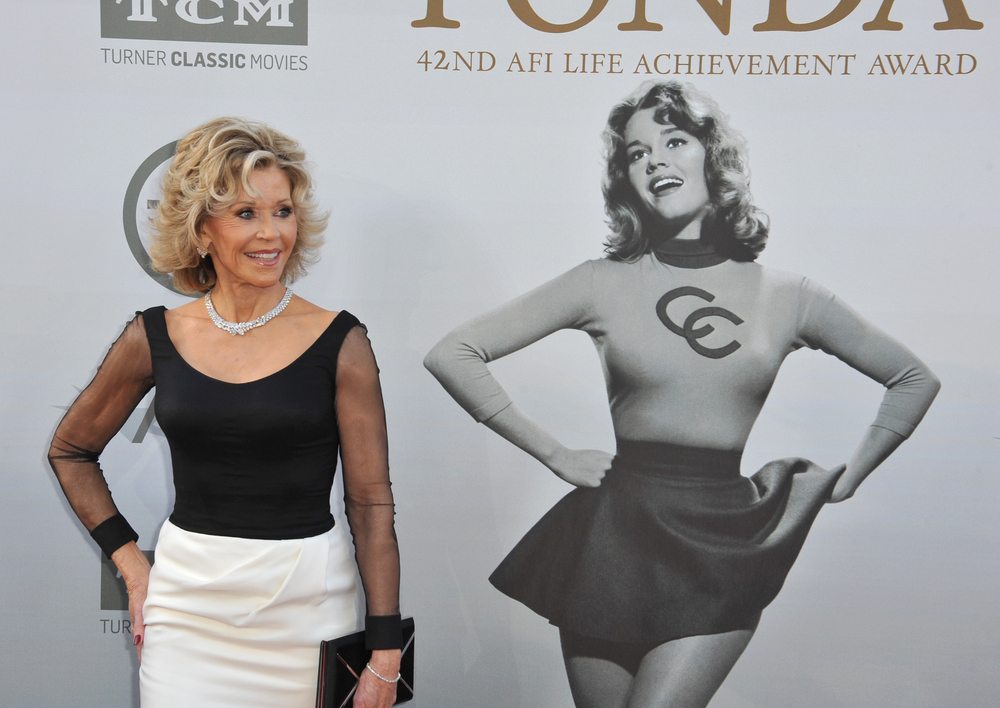 Fonda repeatedly says that maintaining a happy attitude is the number one thing that keeps you young. "The most important thing is … your attitude, how you feel. Is there love in your life? Are you good in your skin? All of this will make you feel and look younger," she told Byrdie. Indeed, studies on so-called Blue Zones, where the world's longest-living citizens are, found that  positivity is a personality trait shared by many of the communities in which people live over 100. A lot of this optimism, however, involves changing how we think of aging. "The old paradigm was: You're born, you peak at midlife, and then you decline into decrepitude," she told Forbes. "Looking at aging as ascending a staircase, you gain well-being, spirit, soul, wisdom, the ability to be truly intimate and a life with intention." And if you want to stay positive, here are 25 Easy and Instant Mood Boosters. 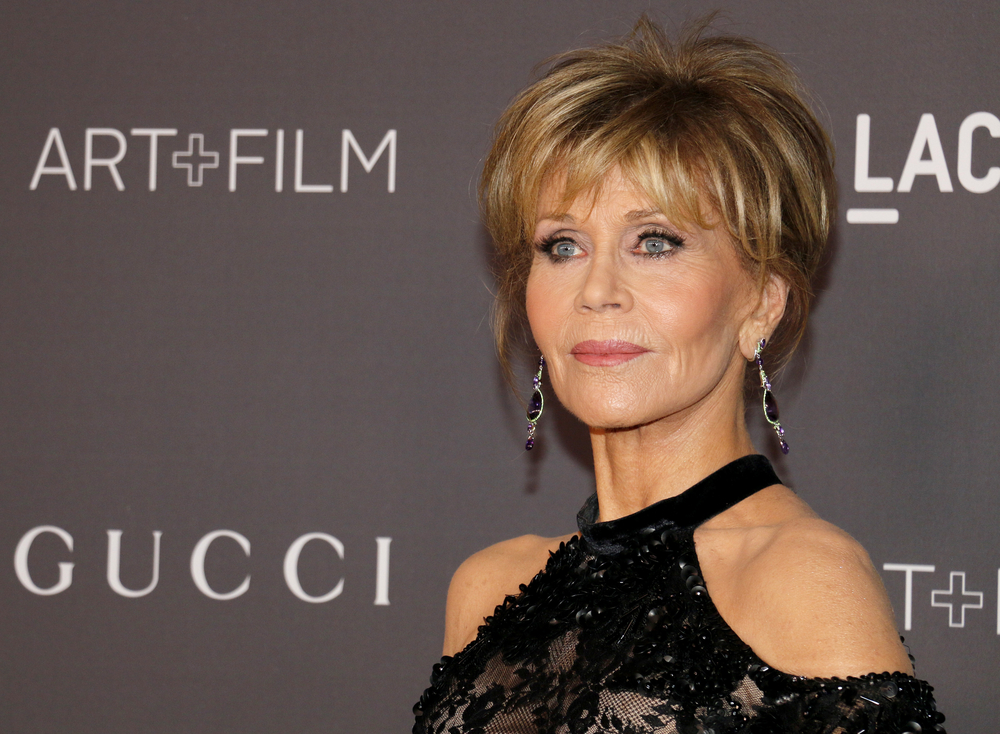 As mentioned before, Fonda hasn't shied away from admitting that she had work done on her jawline and under her eyes so that her face would look less "droopy." "I felt pretty terrific, but I always looked tired," she said. "I got tired of not looking like how I felt." It's 2018. There's no stigma around plastic surgery anymore so if you want to get a little nip-tuck then more power to you!

5
It's Never to Late to Cut Bad Habits 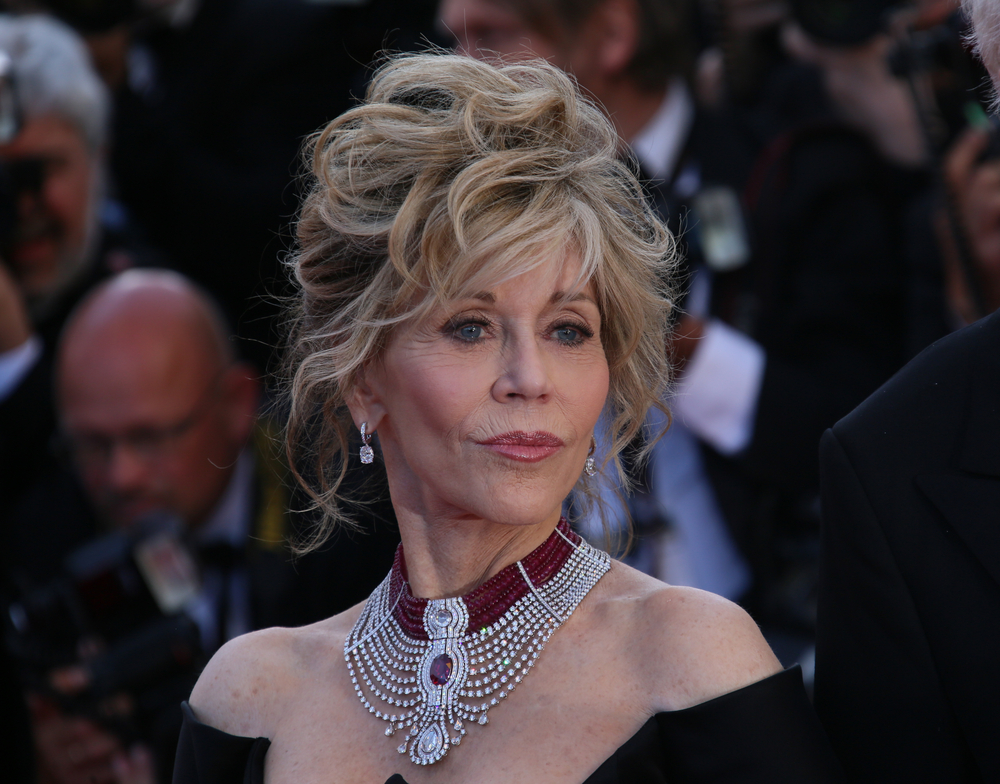 Everyone knows that smoking, drinking alcohol, and not getting enough sleep ages you, but after 50 years of doing it, a lot of people think that the damage has been done and there's no use quitting now. In her bestselling book, PrimeTime, she emphasized that's not the case at all. After all, she made changes at 60, and she's still reaping the rewards!

6
Don't Worry About What Other People Think 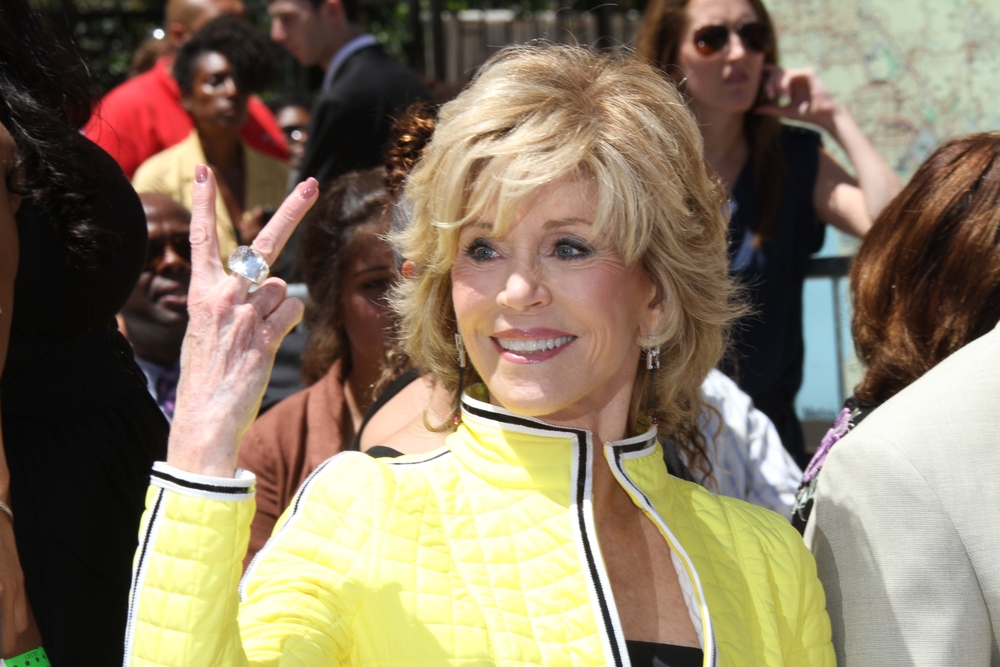 It's likely that Fonda isn't sweating Kelly's caustic comments, and that's part of what keeps her young! In 2015, Fonda said that, at 77, she felt younger and happier than she'd ever been. "I was so old at 20. I was ancient at 30. I'm so much younger now," she said in an appearance on The Late Show with Stephen Colbert. "It's like what the hell do you have to lose? "What can they do to me now that they haven't already tried?"

Diana Bruk
Diana is a senior editor who writes about sex and relationships, modern dating trends, and health and wellness. Read more
Filed Under
Aging • Beauty • Skin and Face • Skincare
Read This Next
Latest News
Read This Next