What to do when the ocean's biggest bully comes after you

Despite their rarity, we're clearly obsessed with shark attacks. From the epic battle of man versus nature in the Jaws films to the true story of surfer Bethany Meilani Hamilton-Dirks, who survived a shark attack and was eventually portrayed in the movie Soul Surfer, we are continually fascinated by the dangers of our ocean's iconic predators.

However, if you ever find yourself among of the unlucky few who angers the scariest bully with fins—after all, you are more likely to be struck by lightning (or even die of chronic constipation) than to perish by shark bite—there are tactics you can use to defend yourself. And yes, with this knowledge, a little grit and gumption, and a dash of luck, you could emerge unscathed. According to the experts, these are the five ways to keep your sanity and your life when attacked by a shark. So read on, and be prepared. And for more on the ocean's most fascinating predators, here are 50 Shocking Facts about Sharks.ae0fcc31ae342fd3a1346ebb1f342fcb

1
Rule No. 1: Fight. Don't play dead. And use whatever weapons you have on hand. 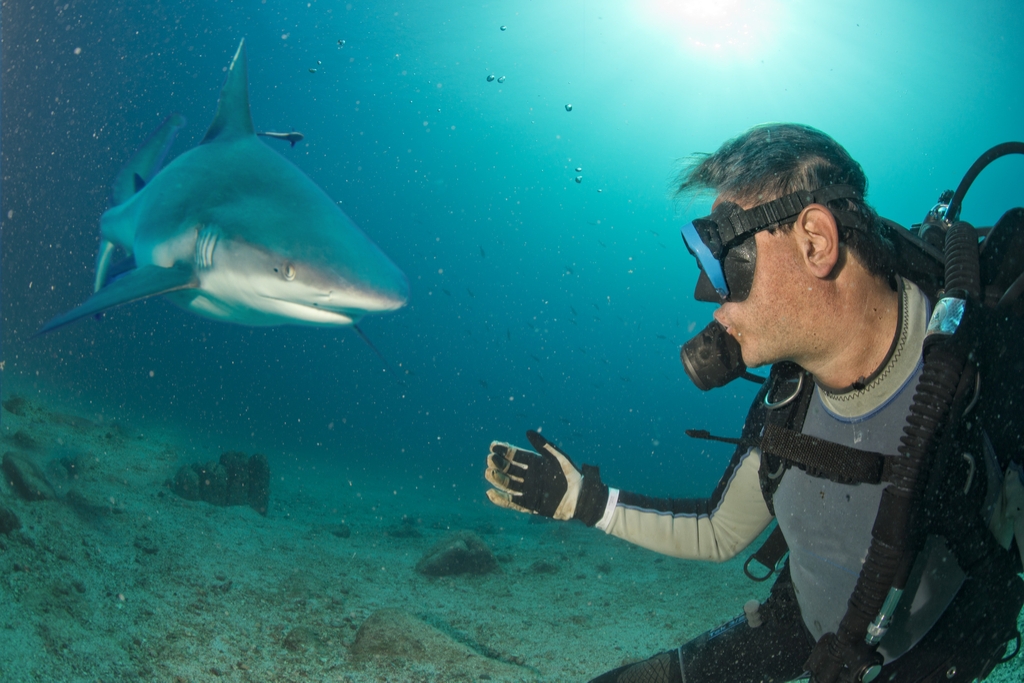 According to the ReefQuest Centre for Shark Research, use whatever weapons—like a spear gun, for instance—you may have on your person at the time of the attack if you're able to get to them quickly. And for more threats lurking underwater, learn the 20 Bizarre Sea Creatures That Look Like They're Not Real. 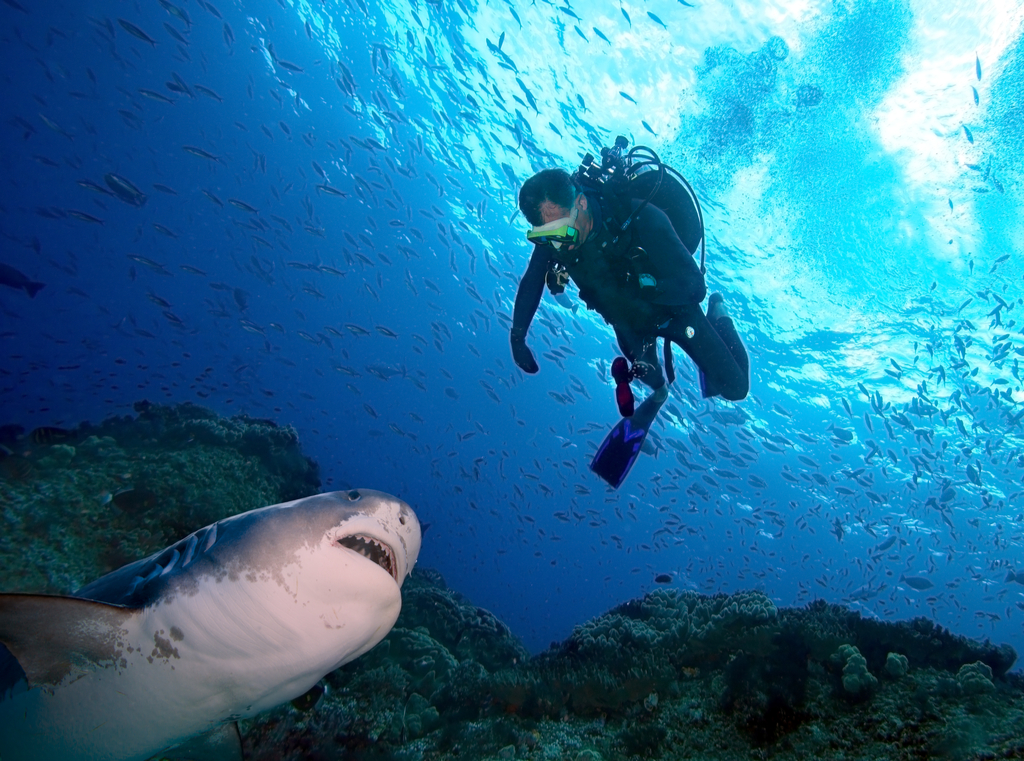 To truly give yourself a fighting chance, stand your ground—or, uh, swim your water—and be aggressive, says George Burgess, curator of the ISAF. Sharks appreciate size and power, so fighting back with all of your might will do its part to make the shark doubt whether attacking you is worth the pain you're inflicting. This aggressive approach makes far more sense than playing dead, which will only make you a more viable meal for the shark, since they often opt for deceased animals.

Punch the shark in its sensitive areas, like the nose, eyes, and gills, says Burgess. Further, if a shark is circling you and appearing aggressive in nature, buy yourself some time to swim to safety by surprising the shark with a punch to the nose. According to Burgess, this is just like throwing the first punch when approached by a school bully. It will shock the shark and give you time to get away from a potentially dangerous situation. And for more reasons to avoid an ocean getaway, check out these 30 Reasons Why the Ocean Is Scarier Than Space.

4
Take note of the type of shark. 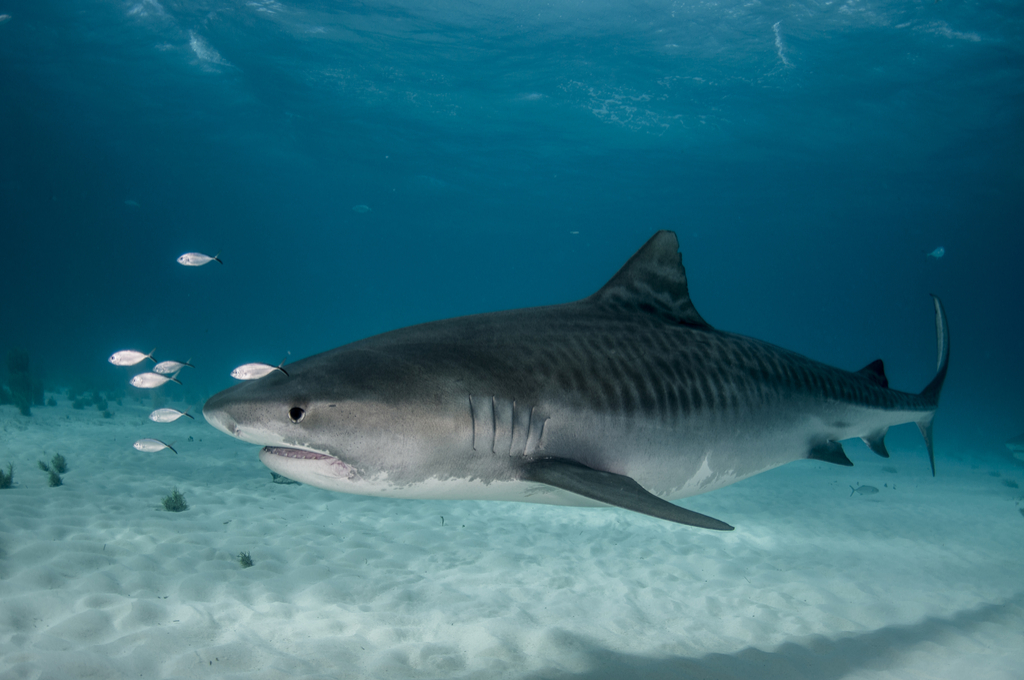 According to Chris Lowe, director of the Shark Lab, at California State University, Long Beach, the type of shark should also decide your fighting stance. For example, a bite from a Great White may give you more time to escape because any blow to their large frame is going to be disorienting. However, the reef shark, common in Florida, is known to do a "bite and run" maneuver, meaning that, after the first bite, they are likely to leave you alone. On the other hand, a tiger shark, which is identifiable by the stripes on its sides, will often latch on to its prey, so if you're bitten by one, you'll have to wait until it releases itself. Don't punch or hit this shark, says Lowe.

5
Leave the water as calmly as possible. 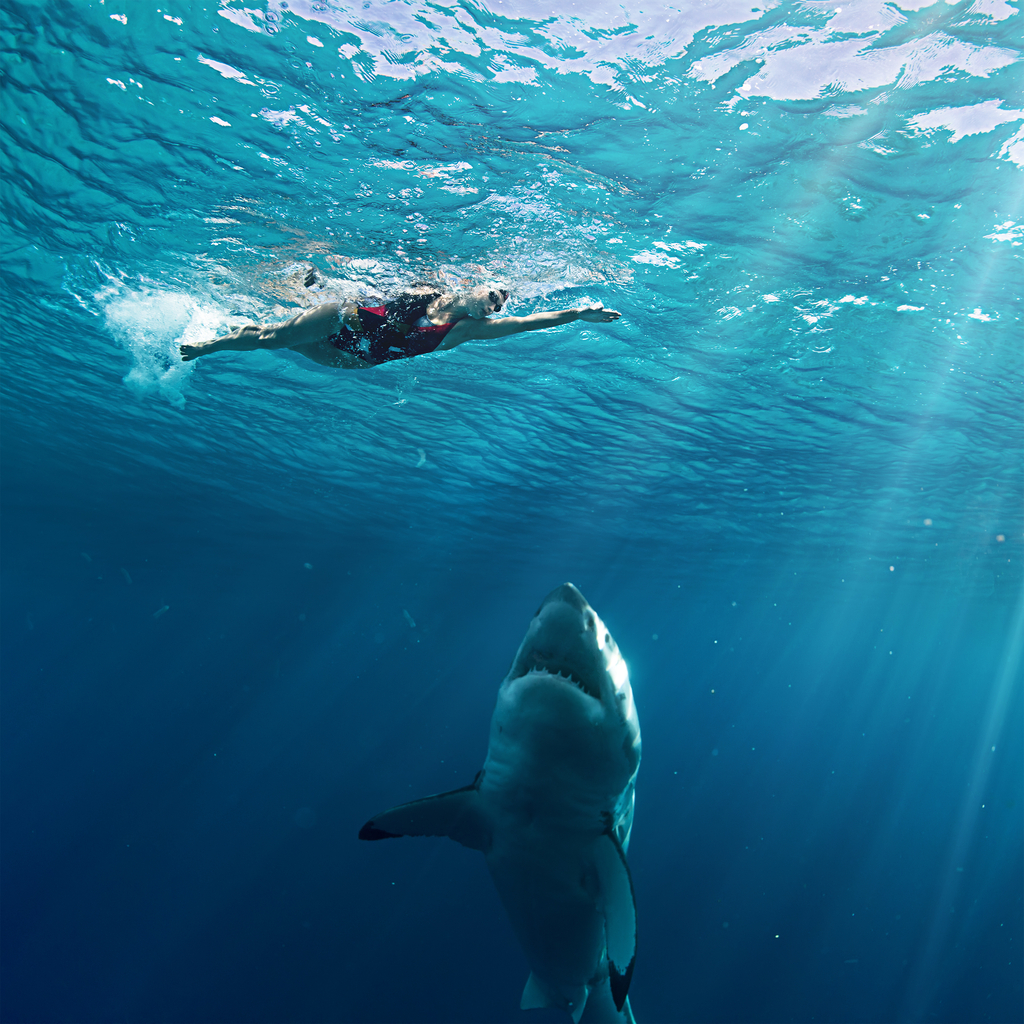 When you have a moment to escape from the attack, do so as efficiently and quickly as possible, says the ReefQuest Centre for Shark Research. Once you've swum to safety, get medical attention as quickly as possible—no matter how small your injuries may seem. And for more astonishing facts about the sea, check out these 30 Facts About the World's Oceans That Will Blow Your Mind.

Ashley Moor
Ashley hails from Dayton, Ohio, and has more than six years of experience in print and digital media. Read more
Filed Under
Animals
Read This Next
Latest News
Read This Next