The 5 Best Ways to Have Amazing Sex After Parenthood

How to ensure intense thrills amid the Legos and juice spills.

The theory of punctuated equilibrium argues that although species generally adapt gradually to incremental environmental changes, every now and then, a cataclysm overturns (punctuates) the status quo (equilibrium), calling for some quick improv from any DNA that wants to keep moving on down the line. The most famous example is the asteroid that collided with Earth 65 million years ago, dooming the dinosaurs. I bring this up because the arrival of children is a meteor to the middle of your sex life, and unless you evolve pronto, your access to Mom will soon be brontosaurus-gone. But this crisis, too, comes with opportunity. If you're attuned to mom-psychology, you may find some surprisingly intense thrills amid the Legos and juice spills. And whatever you do, don't forget the 10 Secrets for Keeping Your Wife Happy.

Moms are very tired. If they're working mothers, add two more verys. But mom-fatigue is a less serious threat to your sex life than your reaction to it. If she thinks you don't get it, or worse, that you're actually disapproving of her exhaustion, resentment mixes with her depletion and she'll suddenly forget all those Samoan sex tricks that made her so much fun back in college. But if she feels that you understand, she's much more likely to summon the strength to toss you five minutes of that sequence that made the honeymoon so memorable. So either actually empathize or, for God's sake, pretend to. When you're communicating your understanding, don't forget the 13 Sexiest Things You Can Ever Say to a Woman.ae0fcc31ae342fd3a1346ebb1f342fcb 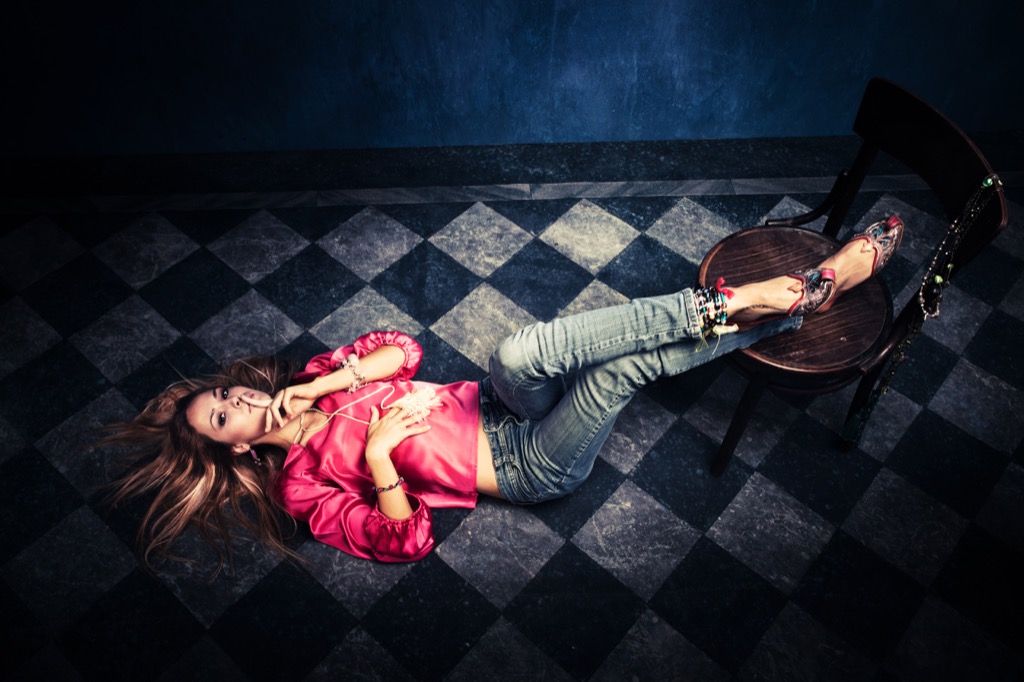 Parents have to get good at noiseless sex. I know one dad who has, on occasion, shoved the corner of a quilt into his mouth to stifle himself. I also know a mother who swears that the necessity of cuddling quietly actually adds intensity to her, well . . . exaltation. She opines that perhaps the energy she used to expend (pre-kids) yelping like a she-wolf is now somehow happily channeled to other, well, channels. And while you're keeping things steamy in the sack, be sure to read about the Ways to Make Your Marriage Last Forever.

3
To Summon the Siren, Praise the Mom

The reason she's so tired isn't because of the actual work she's doing (even though she's doing plenty) but because of the mom-anxiety she's feeling. These days, the American media is a 24/7 rebuke to Mom. So she's sure that in some way she's coming up short for her kids. It's no longer enough to love them and make them lunch. Nowadays, Mom is expected to micromanage them through an enriched life. Does Junior have learning differences? Is our little girl using the iPad too much? Potential as a harpist? How is his self-esteem holding up? Fact: Mothers who feel inadequate rarely find time to pore over tantric-sex manuals in search of a little something special for Dad.

Mollifying her bad-mom anxiety is a two-step process. First, become what's known as a good father. This requires making the kids meals (no ramen noodles), helping with homework, drying tears, providing laughs, doing the million things loving dads do. There is no need for an academic study to prove that mothers are way less anxious—and more amorous—when there's a devoted, helpful, hard-working man around. Second, you have to take on the smear machine that makes moms feel as if they're failing. Telling her she's a good parent from time to time isn't a bad idea. But you don't want her to feel as if you're bucking her up, so a subtler approach is better. Point out her moments of mom-smarts, those times when she's just-right tender or just-right tough. Mention how much the kids love her chicken and yellow rice, how beautifully she planned that vacation. Assume she can't see her achievements, only her failings. Don't disrespect her anxieties—that will only make them more acute—but try to allay them. This has two benefits: One, it's the right thing to do. Two, you'll get more. Everybody wins. If you succeed, remember the 5 Easy Ways to Make Sex Last (Much) Longer. 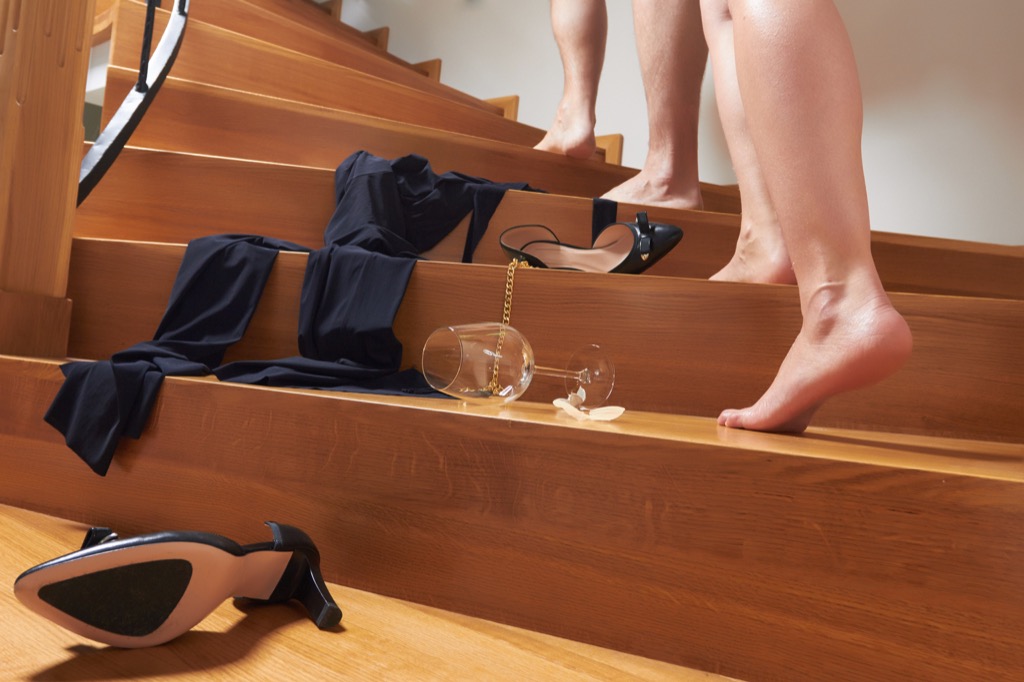 Admit it, back in high school, part of the fun was the possibility that Sister Mary Chastity could have walked in on you and Suzy Merlino at any minute, wasn't it? Well, parents can access that same forbidden-fruit edge. Think of sex seeking as a game. Mom and Dad versus the kids. They are playing defense, and you're trying to… score.

The need for secrecy brings new venues into play. Forget about having sex in the bedroom; that's the first place the kids look. But suddenly the basement stairs are in play. And so is the playhouse out back . . . and the garage. I know a mother who swears that the smell of peat moss now makes her feel peppery. Further, the need for speed, to get this over with before somebody needs a sandwich, adds an urgent goal, a near-feral simplicity that adds heat to the treat. A few years back, a mom and dad from New Jersey—never mind where—once went from soup to nuts, both parents, in 62.2 seconds. Yup, stopwatch measured. Until I hear differently, that's a state record. And if you're thinking of tying the knot, don't miss these 10 Pre-Marriage Solidifiers All Savvy Couples Agree On.

5
Sell the Sizzle of You Two When two people agree to forsake all others, they take on an obligation to love, honor, and cherish each other. So if, post-parenthood, you find yourself being cherished less often, you may feel like the victim of a bait and switch. It's easy for dads to feel abandoned and, yes, even hurt. But since our Superman code of strength forbids any expression of pain, we show our grief in anger. And except for really damaged people, anger is not generally seductive. So your position can't be aggrieved. Dumb husbands complain about the dearth of sex; smart ones describe their passion for their wives and seek help in slaking it.

Tell her you have powerful sexual feelings for her, and that because you understand how hard she's working, how demanding motherhood is, you're actually trying hard not to want her as much as you do. But she makes you crazy with her ways. Her voodoo makes you very glad to be a man.

This riff has two goals. The first is seditious: Make her see you as a ticking bomb, a bomb that needs defusing, if you get my meaning. The less self-serving goal is to urge her to stay in touch with lust. It's an enormous and undervalued asset to a couple, especially one in the middle of the child-rearing tumult.

A strong current in our puritanical society asks men to be apologetic for and even ashamed of their urges. But that's a losing strategy for getting more sex, and a counterproductive position if a durable, joyful marriage is the goal. Physical passion and intimacy is a connector between a man and a woman. And through the kid-rearing years, it often falls to Dad to stand tall on its behalf. Don't portray sex as one of her obligations (though it is) and don't gripe like a little boy who wants more ice cream (though you are). Just express yourself strongly—without rancor—and invite her to the communion of you two. Be proud of your taste for her. It's a blessing, and without it, a marriage can't flourish. If you can make her feel wanted, not pressured, you may inspire her to stay in touch.

Here's the final truth. A Saturday at Sam's Club isn't exactly Last Tango in Paris. But if Mom and Dad can find their way through the fatigue and the obligations, they have opportunities of which the less burdened can only dream. It can get pretty warm between partners in parenthood. When serendipity gives them a few moments alone, Mom and Dad can have at each other hungrily, their bodies inspired by their shared dreads and dreams and memories, by their conspiracy on behalf of their kids. Unless I'm mistaken, that might be as good as it gets.