Start by turning a two-hour wait into a two-minute one.

Who doesn't love going out to eat? It's fun, it's convenient, and—unlike cooking at home—it requires absolutely zero clean-up on your part. But when you get to the restaurant of your choice only to find that there's a two-hour wait, or that the only table available is right next to the bathroom, it's hard to enjoy your night out. And if you end up saddled with an overpriced bottle of wine and some subpar service, well, that's certainly far from a five-star evening.

Put another way: Your dining experience should be as budget-friendly and stress-free as possible. If you know the tricks, it can be—time after time after time. By brushing up on ubiquitous, industry-spanning hacks—secret perks that only the most regular of the regulars know about—you can score everything from discounted food to a prime-spot table to a zero-minute wait. So read on, and bon appétit! 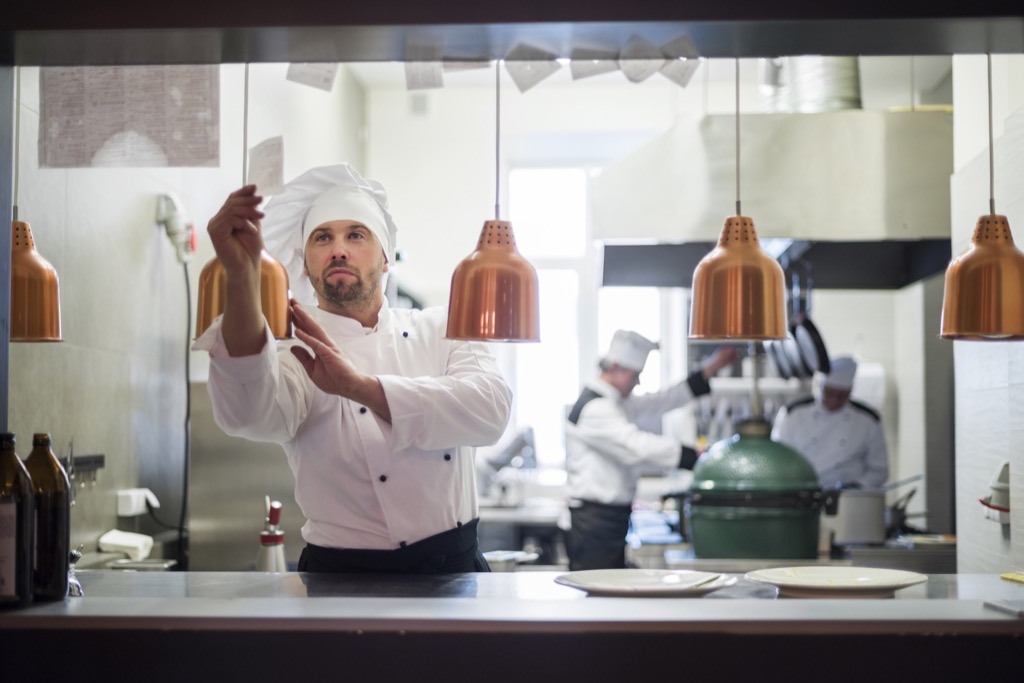 Saturday night is typically seen by patrons as one of the best nights for eating out—but restaurant industry analysts, it's actually one of the worst. Widely referred to as "amateur night," Saturdays are overcrowded by demanding customers with unseasoned palates, and the kitchen staff despises this day because of it. If you want the real foodie experience, eat out any time from Tuesday to Thursday. This is when the real foodies (and, in tandem, the best food and service) come out to play.

2
For last-minute reservations: pick up the phone. 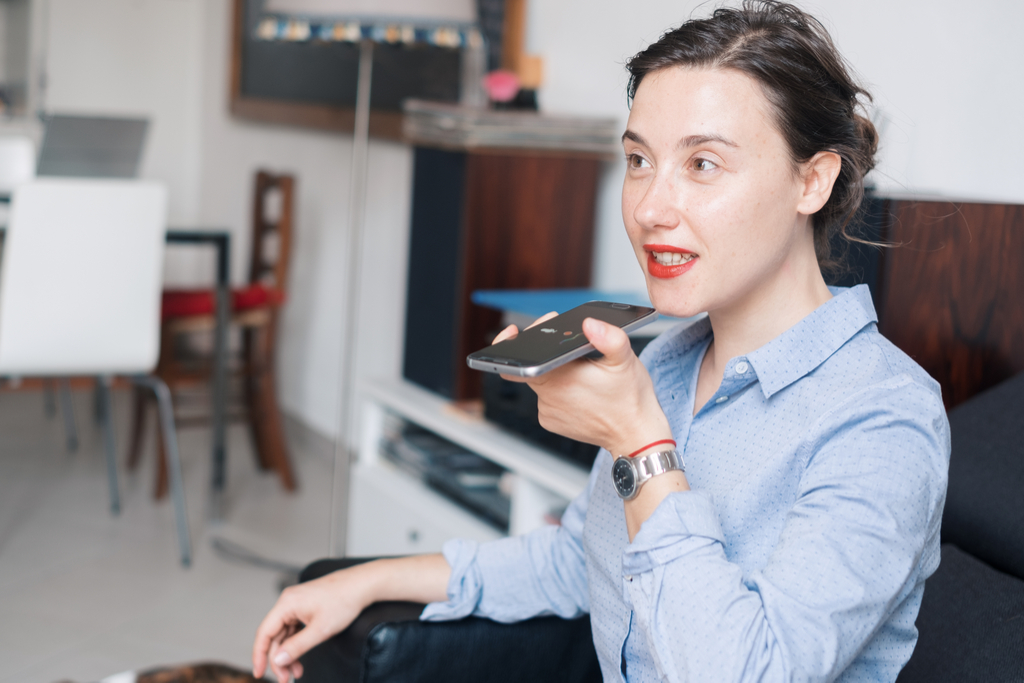 Unfortunately, not all restaurants take reservations. But if you're worried about getting a table at your eatery of choice, one workaround is to call ahead, see if there's a wait list, and put your name on it. Many restaurants will be happy to add your name to the list, especially if the wait is already more than an hour. And even if you can't put your name down, calling ahead will, at the very least, give you a sense of when you might actually eat.

3
For exclusive reservations: there's an app for that.

While, yes, many restaurants technically take reservations, some are booked weeks (or months) in advance. Enter: Resy, an app that makes it possible to entirely circumvent this exclusivity song-and-dance. Here's how it works. Restaurants on the app—there are 10,000, across 160 cities worldwide, generally of the highfalutin, much-ballyhooed variety—set aside a few prime-time tables per night on the app. And for a small fee, it's yours. It's like the VIP version of OpenTable.

If you're already eating out, then you might as well sign up for Seated. It's an app that gives you gift cards to places like Starbucks and Amazon just for visiting a restaurant (which, face it: you were going to spend money at anyway). And on the app OpenTable, making reservations earns you points that you can redeem for things like free meals and Amazon gift cards.

Food writers and restaurant critics swear by the bar seating method. As one Esquire writer explained, "I can saunter into any establishment and within minutes be sitting at the bar ready to eat and drink and totally disregard the hostess's 'It'll be about a 2 hour wait, sir.'" Plus, dining at the bar allows you access to constant, attentive service—you'll never have the need to flag down a waiter.

6
For the best deals: eat at odd hours.

Eating during off-peak hours has its perks. According to the National Restaurant Association, dining establishments offer the best discounts between the hours of 2:00 and 6:00 p.m. And if that's not incentive enough, grabbing a late lunch or early dinner also comes with the benefit of not having to wait hours for a table.

7
For the best deal on wine: splurge.

Alcohol amateurs will typically just order the cheapest bottle or glass of wine that they see, but that actually isn't the most financially sound move to make at a restaurant. According to Wine Enthusiast, the highest markups on the wine menu are usually found on the cheapest bottles. When you're choosing vino, look the top of the list: you'll get more bang for your buck.

8
For a better deal on wine: avoid the second-cheapest bottle.

If, even after learning about the higher markups on less expensive wines, you still want to opt for something lower on the list, just make sure not to order the second-cheapest bottle—it's typically the most marked-up wine at the restaurant. As economics professor Mike Shor explained to Wine Enthusiast, "people don't want to look cheap, so they order the second-cheapest wine."

9
For the freshest fish: order on Tuesdays.

Listen to the late and great Anthony Bourdain when he said, in a now-legendary essay in the New Yorker, to never order fish on Mondays. Since the fish market is closed over the weekend, most restaurants will serve days-old fish on Monday. How appetizing does that sound? If you want to try a restaurant's fish dish, order on a Tuesday, when it's most likely to be fresh.ae0fcc31ae342fd3a1346ebb1f342fcb

10
For a better table: slip a Jackson.

Money can't buy everything, but one thing it can buy is the best table at any restaurant. According to Mark L. Brenner, PhD, psychologist and author of Tipping for Success, pulling the maitre d' aside and feeding them something along the lines of "I'll be happy to take care of you in the right way if you can make these arrangements" should get you the seating arrangement you desire. And when the time comes, Brenner says that a tip of anywhere from $5 to $15 should suffice (though $20 will definitely do the trick).

11
For free (or cheap) food: go right before closing. 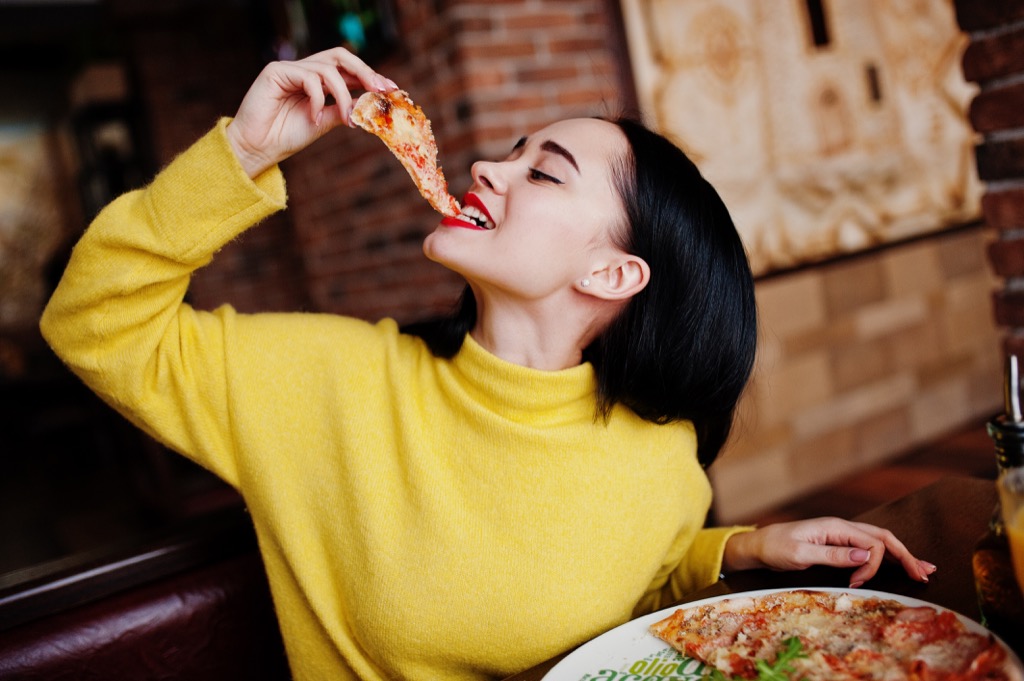 Pizza restaurants and other eateries with pre-prepared food have to throw a lot of their unsold inventory out at the end of the day. What this means for you is that, if you can manage to sneak in just before closing, these restaurants might be willing to offer you food either for free or at a significantly discounted rate, just to get rid of it. You can thank food safety laws for that one.

12
For substitutions: be firm.

A select few food establishments are very strict about their no substitution policies, but for the most part, restaurants are more than happy to accommodate your allergies, dietary restrictions, and likes and dislikes. Chef might not love that you're messing with his signature duck confit, but you're well within your rights to ask for substitutions, especially for health reasons.

13
For the best seat in the house: head to the chef's table. 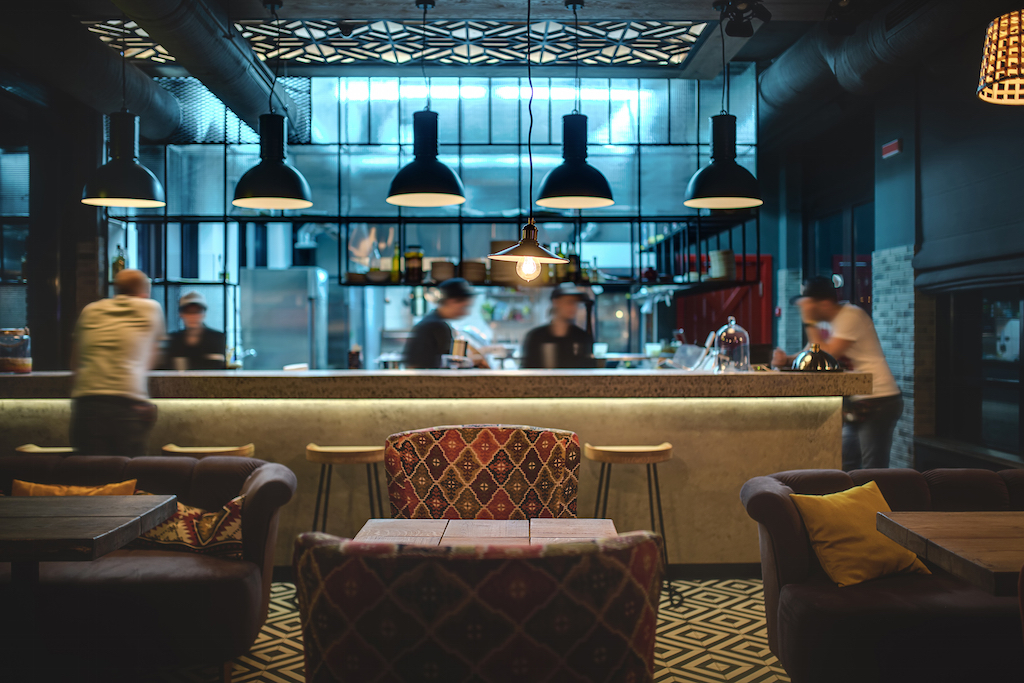 According to data from the National Restaurant Association, the most sought-after seat in any restaurant is the chef's table—the counter section near the kitchen where you can watch the chef and their staff prepare all the food. And as Kim Giguere-Lapine, vice president at the Smith & Wollensky Restaurant Group, explains, diners desire these seats because "they are treated to a behind-the-scenes look at the action in our kitchens and a visit to the table by our amazingly talented chefs, who convey the passion they put into eat dish."

Given how little respect most patrons have for their servers, your waiter or waitress is going to appreciate it if you take the time to remember their name and perhaps even strike up a small conversation with them. And not only will this make your server's day, but it will also incentivize them to give your table a little bit of extra attention.

"When I say, 'Hi, my name is JR, and I'll be taking care of you,' it's great when you say, 'Hi, JR. How are you doing tonight?,'" says JR, a waiter at a fine-dining restaurant. "Then, the next time you go in, ask for that waiter. He may not remember you, but if you requested him, he's going to give you really special service."

15
For the tastiest bargain: fill up on apps.

Most people go out to eat and most look forward to their main course, but what they should actually be doing is making the most of the appetizer menu. "Operators have found that appetizers provide not only a check-boosting opportunity for business growth, but also allow chefs to be more trendy and experimental," Brian Darr, the managing director of Datassential, told FSR Magazine, the food industry publication of record. "Appetizers are also often the first items shown on the menu, which gives the restaurant the perfect vehicle to create a positive first impression." Also, apps tend to be cheaper than entrees. 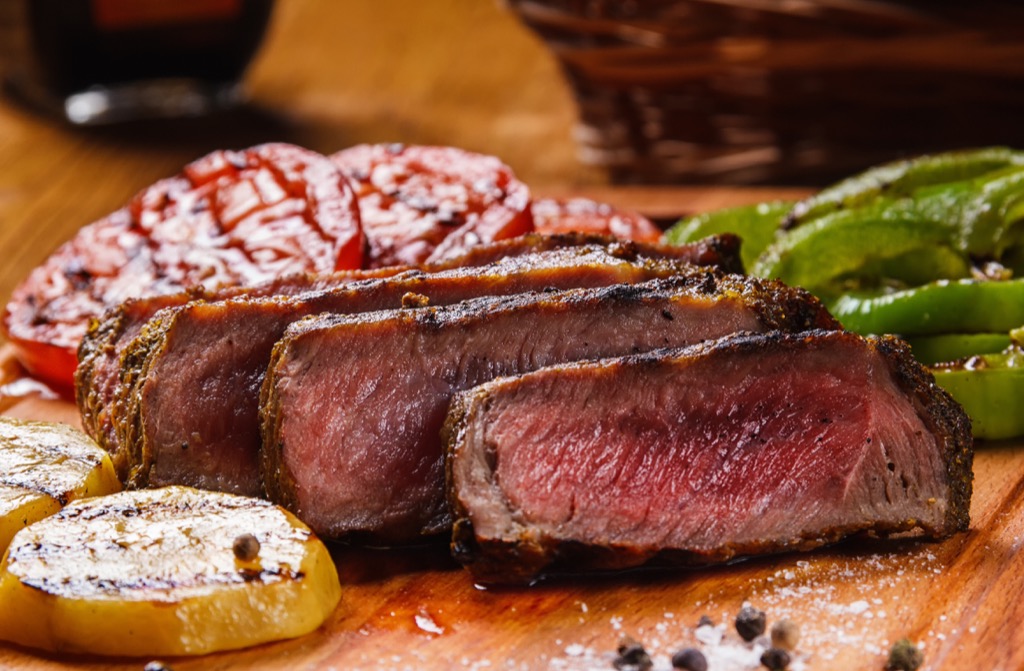 According to the experts, you should never order your steak to be cooked well done. As iconic New York restaurant critic Adam Platt explained, ordering a well done steak leaves you with "a hunk of beef which is burnt and which you put flavorings on. There ain't no point." Chefs, critics, and foodies will instead always order their steaks rare or medium-rare, seeing as this enhances the flavor without drying out the meat.

17
For the best deal on steak: order the short rib. 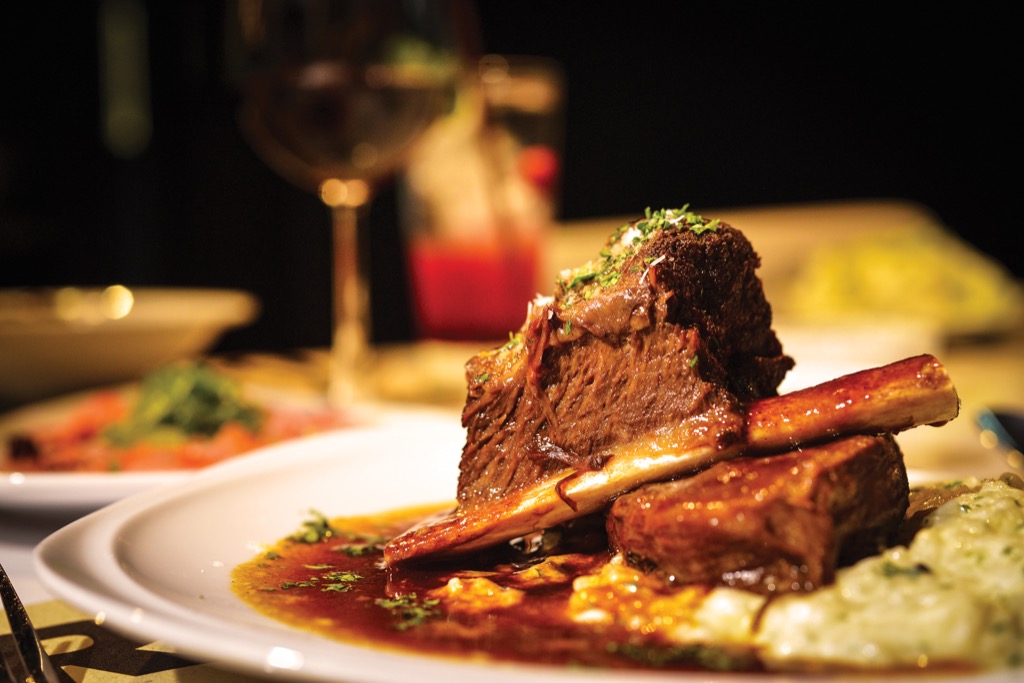 "You can go to any restaurant and pay $65 for a good steak," chef Wade Wiestling of Mastro's Steakhouse explained to First We Feast, "but often for the same weight and better quality, you can get a short rib. It's not one of those highly sought-after steaks either, so it's usually only $40."

Even most restaurant regulars can't say that they've tried every dish that a restaurant has to offer, seeing as a surprising number of restaurants keep their best items off the menu entirely. Take Galatoire's in New Orleans, for instance: Sure, the joint is known for banana bread pudding, but locals know to order the famous fried chicken, which isn't featured on the menu. And over at Momofuku Noodle Bar in New York City, customers go crazy for the "secret" (it's had a lot of press, despite being off-menu) kimchi stew. If there's a seasonal item or special you've been dying to try that isn't in rotation when you visit a restaurant, sometimes all you have to do is ask and you shall receive!

Before you pay your bill, make sure to check social media apps like Yelp! and FourSquare for special check-in discounts. Restaurants will offer everything from free dessert to discounts just for checking in! 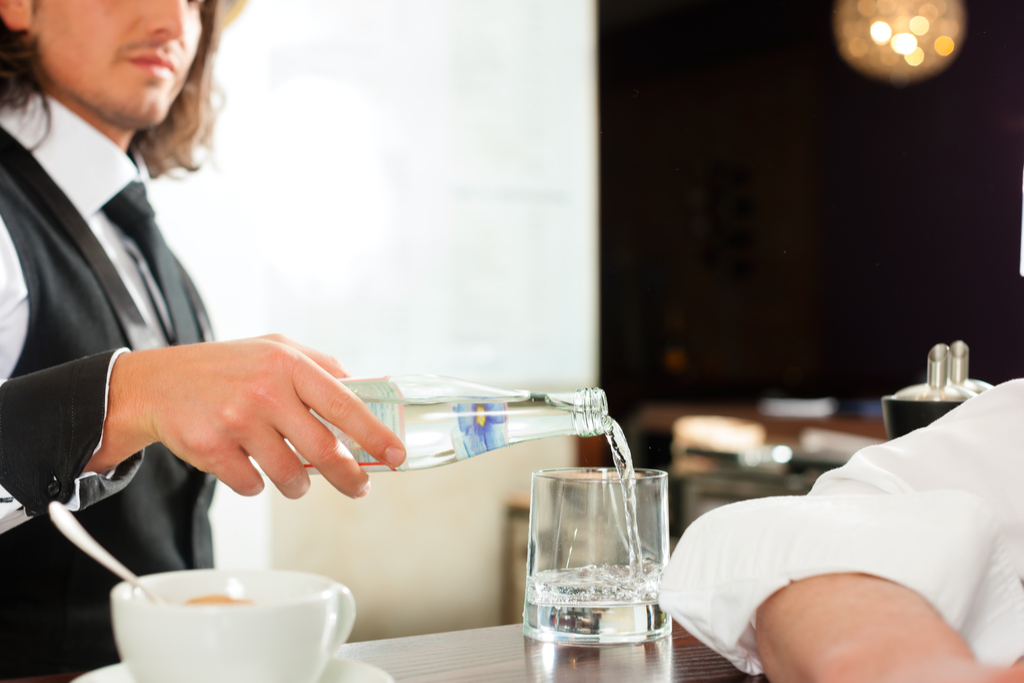 Don't be tricked or bullied into accidentally paying for a bottle of water. In New York City, for example, restaurants are legally required to provide free tap water, and in New South Wales, any establishment that serves alcohol must also provide water free of charge.