If you're one to order in more than you cook, you need to know what you're really consuming.

The idea of forgoing an hour or so over a hot stove to order lo mein or pizza instead is a very tempting one—especially in the era of COVID, when it's much more risky to dine out in general. But your favorite dish to order in might not sound so tempting after hearing about a new study on what's really in your takeout containers, and therefore, in your food. According to the new research out of East China Normal University, those meals you have delivered are covered in small pieces of plastic, which means you could be eating upwards of 200 pieces of microplastics each week as a result of opting for takeout. Read on to find out more about these frightening findings, and for another danger lurking in your home, This Common Household Item Has Been Recalled Over Fire Risk.

The recent study, published in the Journal of Hazardous Materials, analyzed takeout containers made of common types of plastic from five cities across China. After subjecting them to different conditions, such as rinsing and submerging them in hot water to expose them to higher temperatures, the researchers found that tiny pieces of plastic fell from the inside of the containers and onto the food inside them in every instance. The biggest offenders, containers made from polystyrene with rough surfaces, shed as many as 29 pieces of microplastics. The authors say that this means anyone who orders takeout four to seven times a week is likely ingesting 12 to 203 pieces of microplastics per week as a result. That's 10,556 pieces a year.ae0fcc31ae342fd3a1346ebb1f342fcb

Unfortunately, little is known about the exact effects that ingesting microplastics has on our health, but limited studies have led experts to believe that it can affect hormones and fertility, cause nervous system damage, and potentially cause cancer, The Washington Post reports. According to one recent study from the World Wide Fund for Nature (WWF), carried out by University of Newcastle, Australia, our environment is so laden with plastic particles that it's estimated that the average human consumes around five grams of plastic a week—which is about the same as a credit card, The Washington Post notes.

So how can you cut back on the amount of plastic you accidentally eat? Read on for some simple tips, and for more on how you could be accidentally doing yourself harm, check out 20 Surprising Ways You're Damaging Your Body.

They may be convenient, but when it comes down to it, drinking out of plastic water bottles is one of the most likely ways you're ingesting large amounts of microplastics. "I definitely steer away from plastic packaging and try to avoid bottled water as much as possible," Kieran Cox, a PhD candidate who led a recent study on microplastics, told The Guardian. And for more things around that house that could hurt you, check out A New Study Says This Might Be the Most Dangerous Thing in Your Home.

It may be hard to resist the urge to just toss last night's takeout leftovers into the microwave to warm it up, but experts say this can cause chemicals to leach into your food. Instead, transfer your food into a glass or ceramic bowl or plate before you zap it.

Also, don't forget: Preparing baby formula in a plastic bottle can have the same effect, a new study out of Trinity College Dublin found. And for more on items that were just pulled from shelves for being unsafe, check out If You Have This Fan in Your House, Stop Using It Immediately.

3
Don't put plastic in the dishwasher.

According to the American Academy of Pediatrics, your plastic products can also transfer chemicals to your food after they've suffered the blasting heat of a cycle inside the dishwasher. They recommend using glass or stainless steel vessels instead, or hand-washing plastic items when necessary. 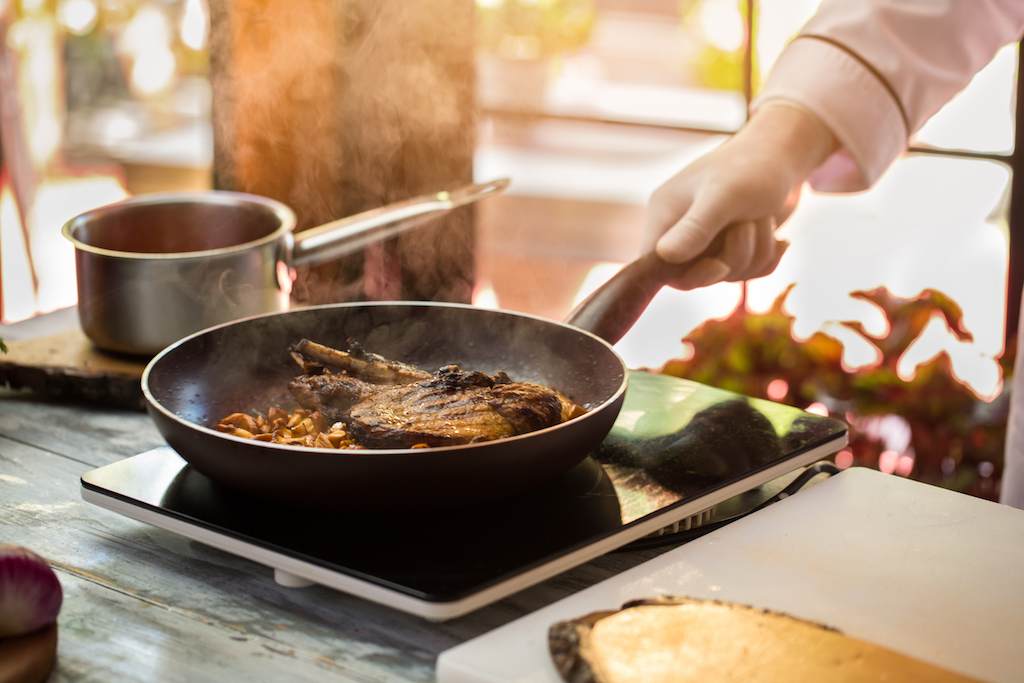 Teflon may be a miracle for helping to keep cleanup short and easy, but over time, it can start to chip and fall off your pots and pans in little pieces. According to a Canadian study published in the journal Nature, pans subjected to regular cooking temperatures began to break down after just two years of use. If you're concerned, try stocking your kitchen with aluminum cookware, ceramic pots and pans, or cast iron skillets instead.

5
Dust around the house regularly.

We don't ingest plastics just through our mouths; we also inhale a good amount of them in the form of dust through our noses. Experts suggest regularly vacuuming and dusting your home to avoid exposure to such chemicals as phthalates, per- and polyfluoroalkyl substances, and flame retardants, The Washington Post reports.

Zachary Mack
Zach is a freelance writer specializing in beer, wine, food, spirits, and travel. He is based in Manhattan. Read more
Filed Under
Dining • Food • Health Advice
Read This Next
Latest News
Read This Next