Yes, you can get your heart broken. Sometimes literally.

Having a committed partner can be lovely: you get emotional support, a friend on-call, and more frequent sexual gratification than you did as a single person. (Sorry, Don Jons, but it's true.) On the other hand, that same partner can drive you mad with strife and romantic discord. As it so happens, your one-and-only can affect more than just your mood swings: they can also have a drastic impact on your physical health. Whether it's bad stuff (like giving you chronic back pain) or good (like making you quit a noxious habit), here are the 11 science-backed ways that having a partner will affect your health.

1
They Alter Your Microbiome 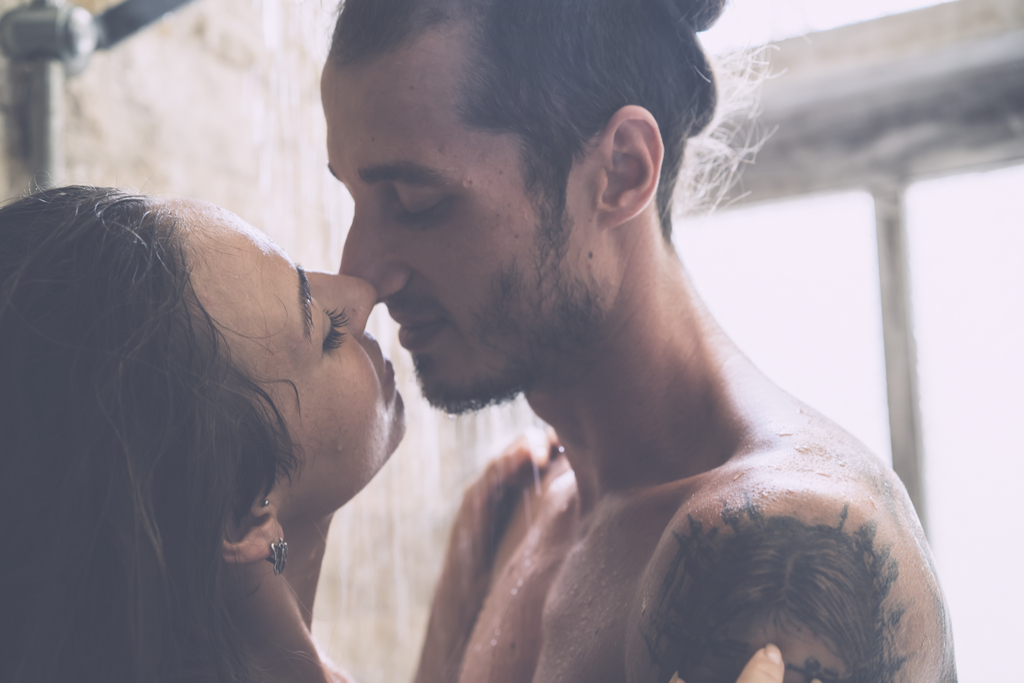 A study in mSystems found that cohabiting couples end up having starkly similar microbiomes. (That's the collection of bacteria that lives on your body and in your digestive tract.) According to the research, a computer algorithm was able to detect cohabiting couples with a whopping 86 percent accuracy. The study's authors are sure to point out that, when you think about it, this makes sense: Cohabiting couples share showers, after all.

2
They Give You Chronic Pain

No matter how much you love your partner, they may be causing you pain—literally. A study in PLOS Medicine showed that partners of folks with depression were 19 percent more likely to suffer chronic pain, whether that's weakness, aches, or the chronic bugaboo that plagues more than 80 percent of us: lower back pain.

3
They Exacerbate Your Insomnia

4
They Make You Put On the Pounds 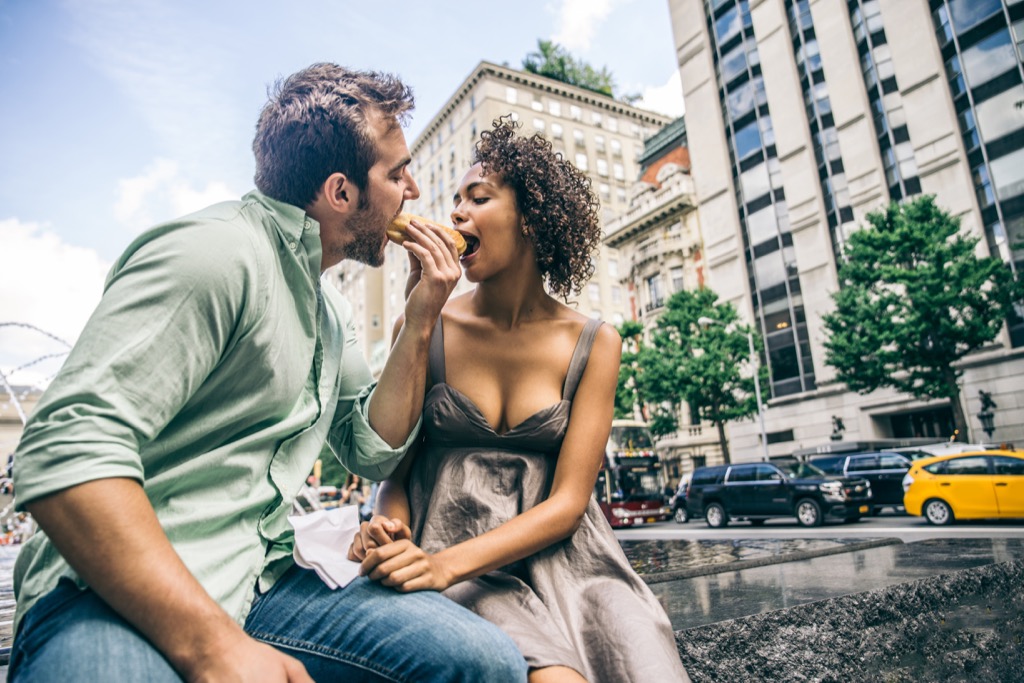 "Fat and happy" is a phrase for a reason, it seems. Researchers at Southern Methodist University found that happy newlyweds gained weight faster than unhappy newlyweds. The reason? Happy newlyweds are less inclined to leave their marriage, and thus don't have to boost their sex appeal for eventual singlehood.

It sounds nice: you and your partner going on a diet together, the two of your striving to life your best life. But according to a study in Eating Behaviors, when romantic couples try to diet together, one will succeed, and one will fall behind; the trailing individual in more likely to lose confidence and give up on the goal.

6
They Help You Quit Smoking

7
They Increase Your Chances of Surviving A Bypass 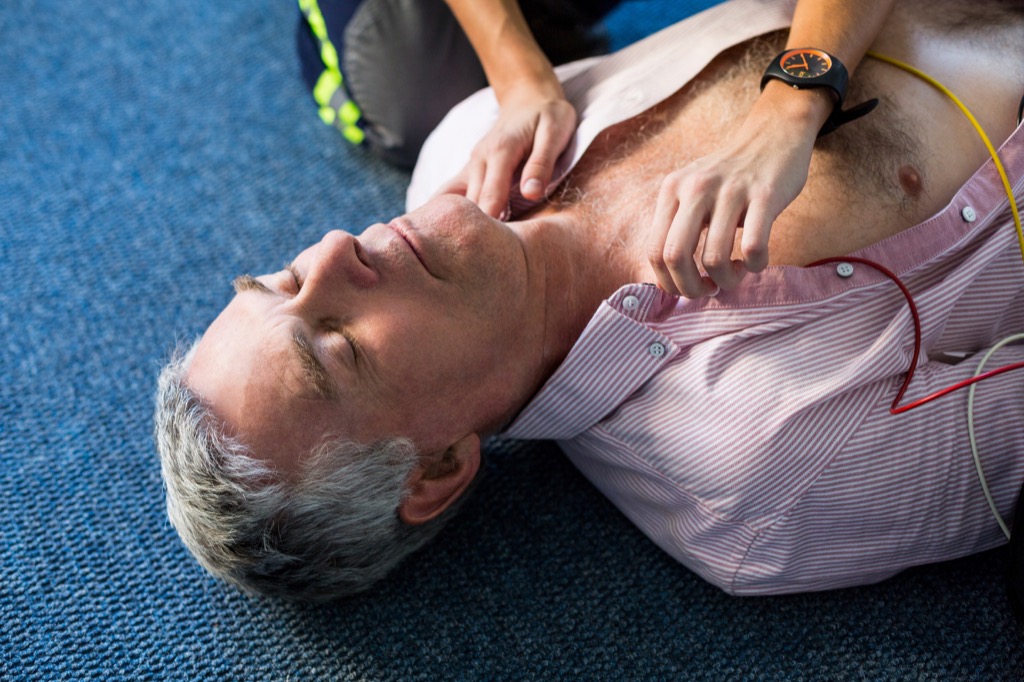 Once you hit a certain age, heart issues become more prevalent—and with them, rates of coronary bypass surgery surge, as well. But if you're married, you're more likely to make it through the ordeal. According to a study in Health Psychology of folks who underwent bypass surgery, married individuals survived, on average, an additional 15 years longer than their single counterparts.

8
They Help You Find—And Kill—Cancer

Doctors at Harvard Medical School found that married people are more likely to catch cancer early on and take steps toward recovery. The reason? A spouse is more likely to urge you to be diligent about medical check-ups, whereas single people typically just let those things fly. Furthermore, married people survive cancer at a higher rate than non-married people. 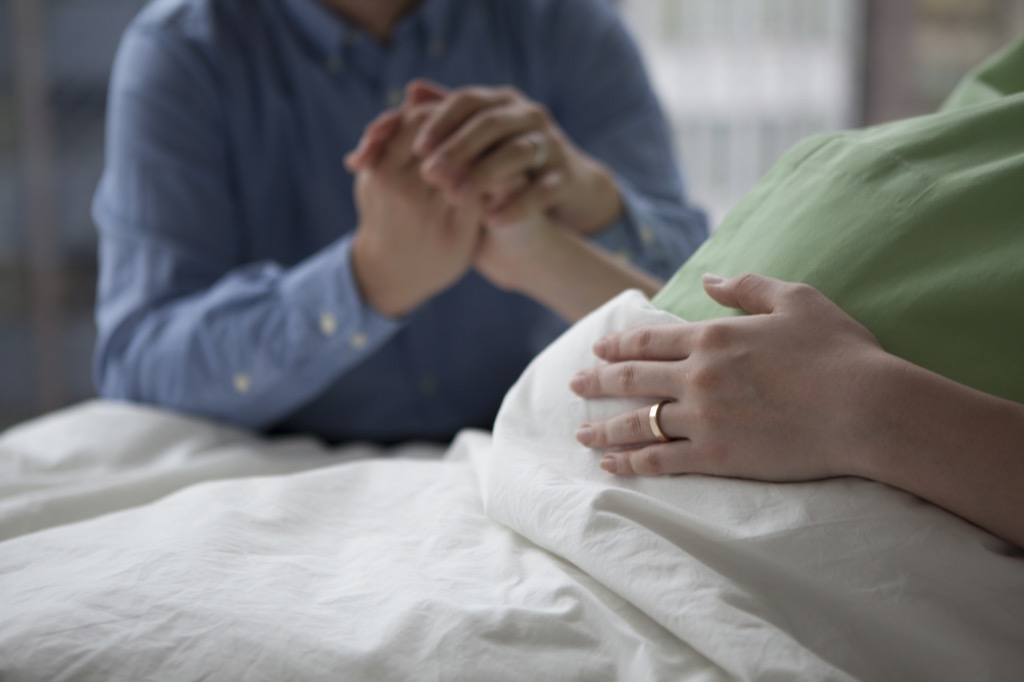 If you're a woman, that is. According to a study in Scientific Reports, women in healthy, happy relationships can experience a phenomenon called "interpersonal synchronization." In other words, when a woman is in pain, physical contact with her partner leads to shared and synchronized heart rates, breathing patterns, and even pain levels. Take note: When she's giving birth, hold her hand. 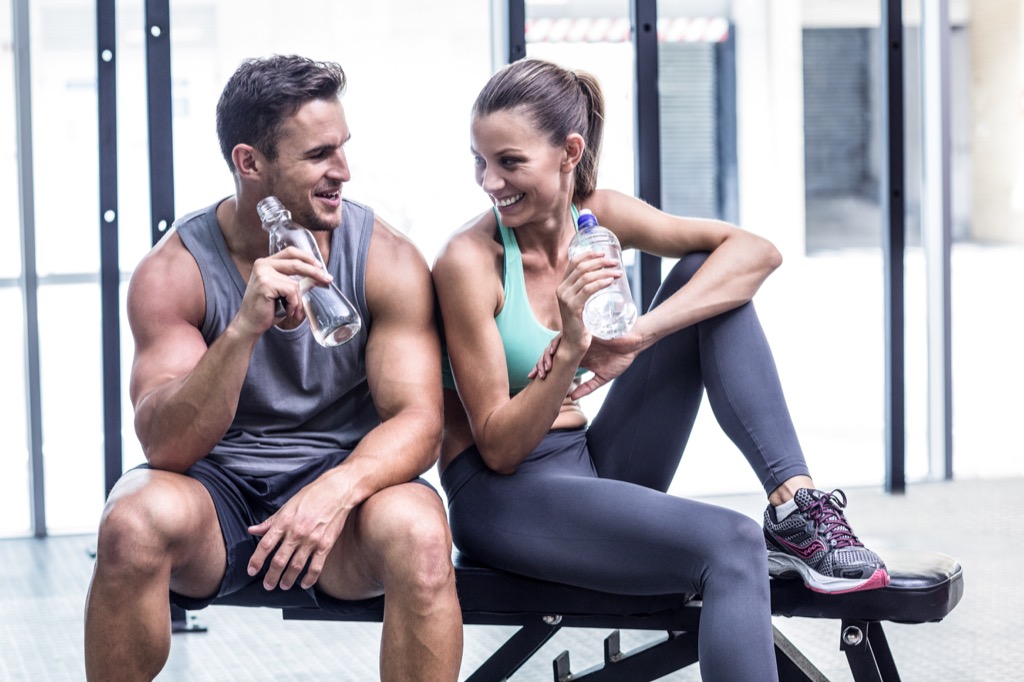 Research out of the Johns Hopkins Bloomberg School of Public Health found that being married can have a direct impact on physical fitness—but more so for men. The researchers found that, over the course of 6 years, if a woman's husband met his fitness goals, she was 40 percent more likely to meet hers. But on the other hand, if a man's wife met her goals, he was 70 percent more likely to meet his. And for motivation to get yourself working out, be sure to learn the 11 ways that smart people motivate themselves to go to the gym.

11
They Curb Your Stress 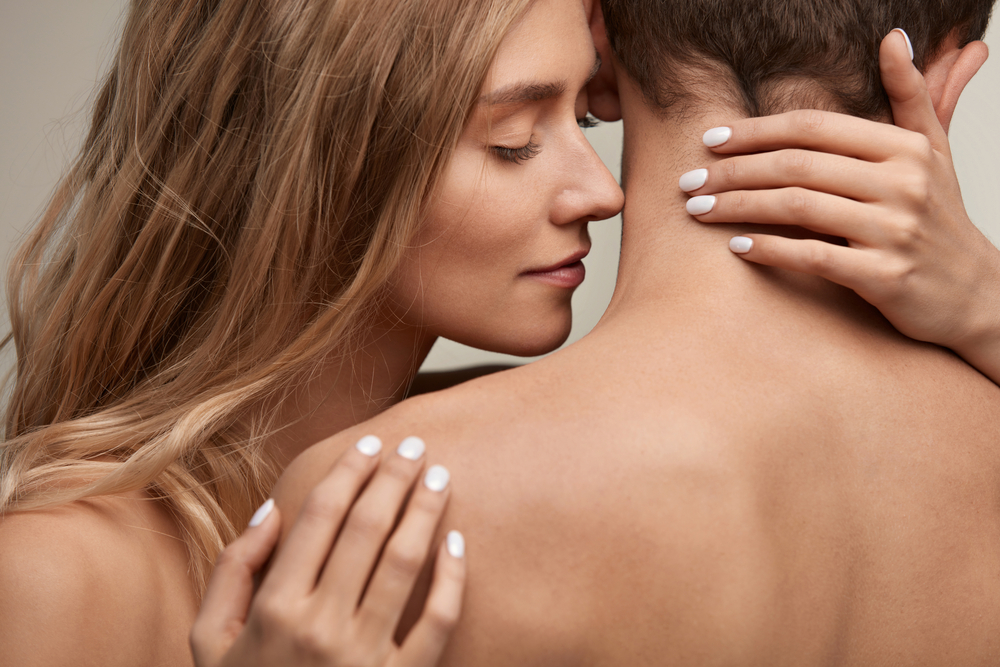 Or, specifically, their scent curbs your stress. As one study published in the Journal of Personality and Social Psychology revealed, one simple whiff of a partner's signature—whether it's on clothing or hair—can cause cortisol levels to plummet. And while it works for most anyone in a committed relationship, sorry, fellas—it's more effective for women.

12
They Weaken Your Immune System (Divorcees Only!)

It sounds ridiculous, but it's true. Per a paper published in Psychosomatic Medicine, getting divorced can cause your immune system to develop some cracks; it's not that you're more likely to get sick—it's that you're less likely to quickly fight off a sickness when you do come down with something.

13
They Can Literally Break Your Heart 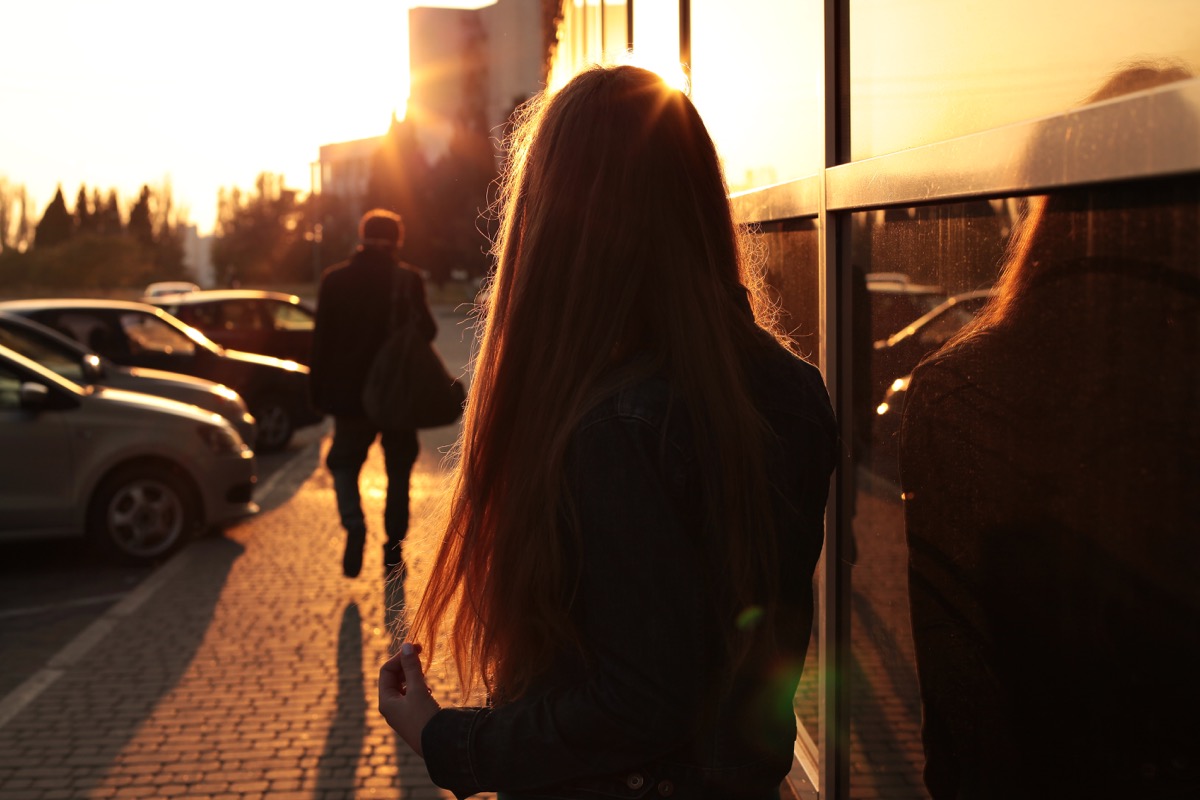 Set aside any notions of melodramatic poetry. The science is conclusive: you can indeed die from a literally broken heart. Now, it's not like your partner, in buying you both one-way tickets to splitsville, is cleaving your heart in two an axe. It's more that, in some cases, an unexpected level of extreme stress or grief can cause the heart to go into overdrive.

For instance: a condition doctors call Takotsubo syndrome, where high levels of adrenaline flow into the heart, causing it to balloon into a shape eerily reminiscent of the pots Japanese fishermen use to trap octopus. In Japanese, Takotsubo is the word for such pots.

14
They Make You Feel Intoxicated 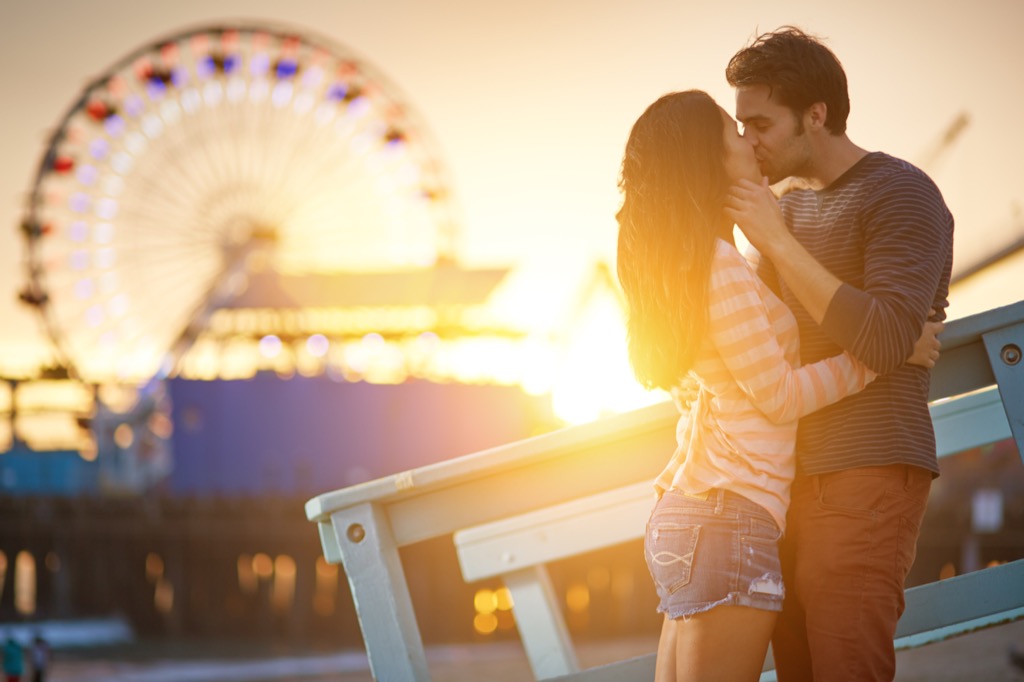 "Drunk on love" isn't just a cheesy expression. It's the truth. According to one study in the Journal of Sexual Medicine, falling in love—that first exhilarating, unmistakable phase of a relationship—releases high levels of oxytocin and dopamine, the so-called "happy hormones." According to your brain's chemistry, it's no different than being on feel-good drugs. Let's hope you never have a comedown.

15
They Increase Your Longevity

And finally, according to a study in Annals of Behavior Medicine, married people just live longer. The researchers found that, out of 5,000 individuals born in the 1940s, the single folks died prematurely at nearly twice the rate. Which… all right, then: Time to settle down. And if you're ready for that, be sure to bone up on the 50 Best Marriage Tips of All Time.

Ari Notis
Ari is an editor specializing in news and lifestyle. Read more
Filed Under
Back Pain • Dating • Marriage • Relationship Advice
Read This Next
Latest News
Read This Next