This Symptom Shows Up 5 Years Before a Parkinson's Diagnosis, New Study Says

Knowing the earliest symptoms of this disease can speed up diagnosis—and treatment.

Parkinson's disease (PD) is a progressive movement disorder that affects the nervous system. Right now, nearly one million Americans are living with the condition, and 60,000 new cases are diagnosed each year. The symptoms of this disorder tend to begin subtly, gradually worsening over time, and are often overlooked until more severe signs develop. Read on to learn about one symptom that new research shows can appear up to five years before diagnosis, and what you should do if it happens to you.

READ THIS NEXT: Neil Diamond Says Parkinson's Means He Can Never Do This Again.

Parkinson's can come with a wide range of symptoms.

The symptom most commonly associated with Parkinson's disease is tremor, but there are several others which frequently appear in PD patients. These include slowed movement (bradykinesia), rigid muscles, loss of automatic movements, difficulty with speech, poor balance, impaired posture, and changes in one's handwriting, the Mayo Clinic says.

However, there's also a wide range of less common symptoms that can affect PD patients, and some of them are unrelated to movement. "Patients sometimes are not aware of non-motor symptoms—such as constipation, depression, or erectile dysfunction—being common manifestations of Parkinson's," Cristina Simonet, MD, a neurologist and the lead author of a new study on early PD symptoms, told Very Well Health. "Therefore, they will not report these symptoms to their GP. That is why direct questioning is so important."

READ THIS NEXT: If You Notice This With Your Toes, Get Checked for Parkinson's.

This symptom can appear five years before a PD diagnosis.

According to Simonet's study, which was published in JAMA Neurology in Mar. 2022, there's one non-motor symptom which can show up five years before a Parkinson's diagnosis: hearing loss.ae0fcc31ae342fd3a1346ebb1f342fcb

Simonet and her team analyzed health data from over one million people in East London, England, and found that some of the known symptoms of Parkinson's presented earlier than previously believed. They observed that patients with hearing loss severe enough to require a referral for a hearing test were more likely to develop PD in the following five years than those who did not.

While the presence of any one symptom cannot lead to a Parkinson's diagnosis, recognizing a pattern of symptoms can. For this reason, adding hearing loss to your list of possible red flags may help you better communicate your symptoms to your medical provider.

Parkinson's primarily affects older people, and hearing loss is more prevalent in this population. However, Parkinson's also appears to directly affect one's hearing, research shows. "Auditory dysfunction is a common non-motor manifestation of early-onset PD and more frequent in younger patients, indicating that it may be independent of aging," concludes a 2019 study published in the Journal of Movement Disorders (JMD).

As the Mayo Clinic explains, those with Parkinson's disease have low concentrations of dopamine in the brain. Experts say that inadequate dopamine levels can lead to damage in the cochlea, a cavity in the inner ear, resulting in hearing loss.

Hearing aids may greatly improve the quality of life for PD patients. 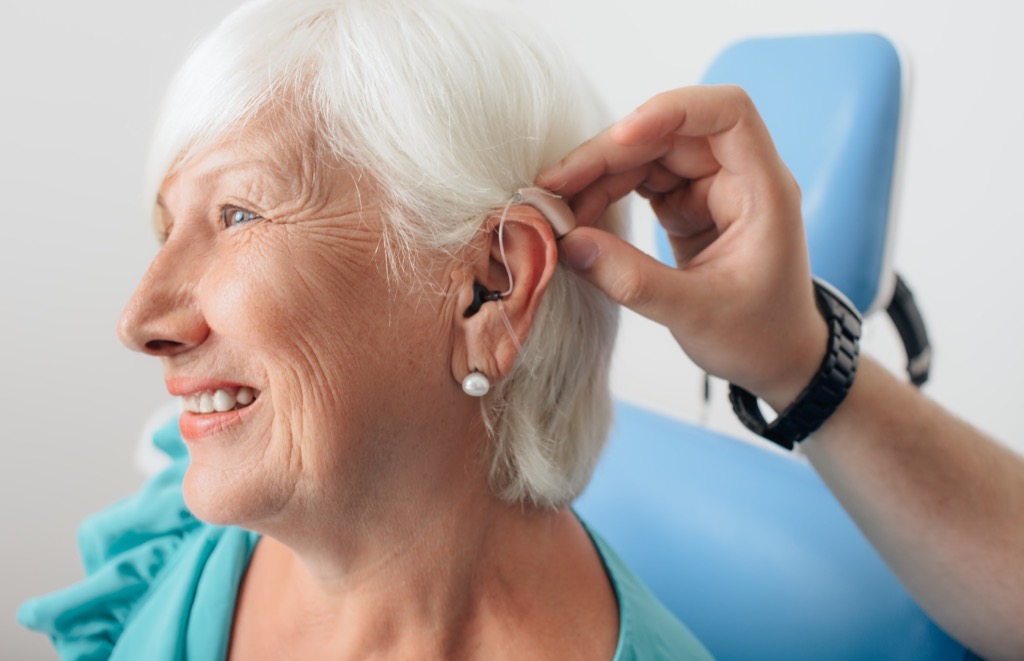 Maintaining a healthy social network can enhance anyone's health, but it is especially important for those with Parkinson's disease. That's because social isolation can distinctly worsen cognitive and motor symptoms of PD.

In a 2020 study published in the journal NPJ Parkinson's Disease, researchers found that "individuals who reported being lonely experienced a 55 percent greater symptom severity than those who were not lonely. Individuals who documented having a lot of friends had 21 percent fewer symptoms than those with few or no friends. Social isolation was associated with greater patient-reported PD severity and lower quality of life, although it is unclear whether this is the cause and/or a consequence of the disease."

Having your hearing tested and getting a hearing aid if needed can keep you crucially connected to those closest to you. Speak with your doctor if you notice changes in your hearing—especially if other symptoms of PD are present.

READ THIS NEXT: If You've Done This, Your Parkinson's Risk Goes Up 90 Percent, Study Says.