20 Hotels So Outrageous You Won't Believe They're Real

Think of the world's legendarily over-the-top hotels. You know: hotels like the laughably opulent Mandarin Oriental in New York, or the intimidatingly posh Park Hyatt in Tokyo, or the straight-out-of-royalty Fairmont in, well, pick a Fairmont location (they're all amazing). For many of us, these luscious digs and their oodles of splendor are nothing if not outrageous. But for others, they're as rote as a Motel 6 on Route 66.

Yes, for a certain type of globe-trotting individual, "outrageous hotel" takes on a whole new meaning. Imagine sleeping underwater in the Maldives, for example, or staying at an actual castle buried in the rolling hills of Ireland. Well, as it turns out, places like this exist. Don't believe us? Just read on. Within, you'll find the 20 most outrageous—whether by level of lavishness or degree of sheer ridiculousness—hotels on the entire planet. And to get even more wanderlust, don't miss The 10 Most Jaw-Dropping Luxury Hotels in the World. 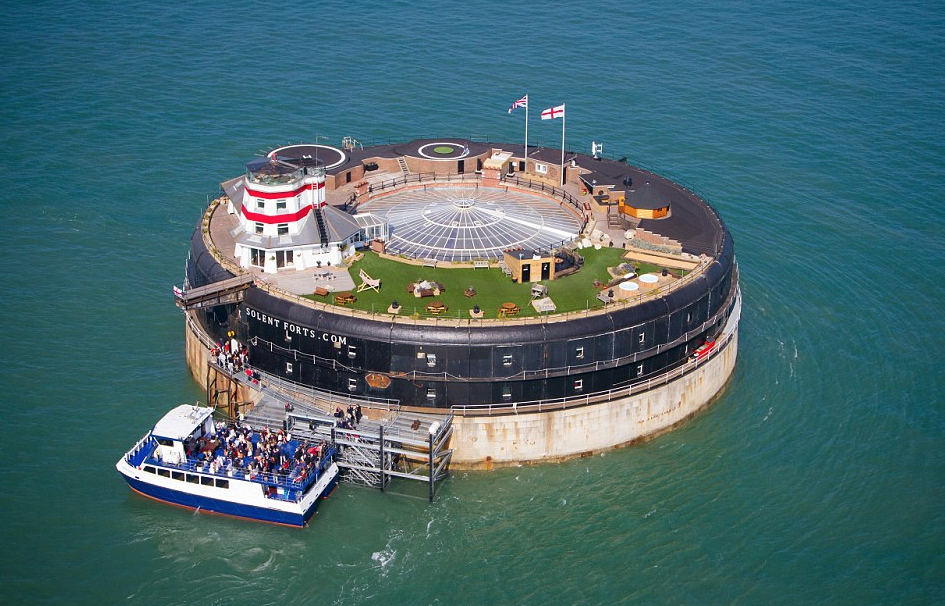 Where to fly: Southampton Airport Parkway

One of the most secluded hotels in the world, No Man's Fort in Portsmouth is only accessible by boat. The private fort features five bars, rooftop hot tubs, and a cabaret club, among many other irresistible amenities.

Pro tip: For the best views of the sea, book the Lighthouse suite.

And for more about your hotel stay, check out these 20 Shocking Facts About Your Hotel Room. 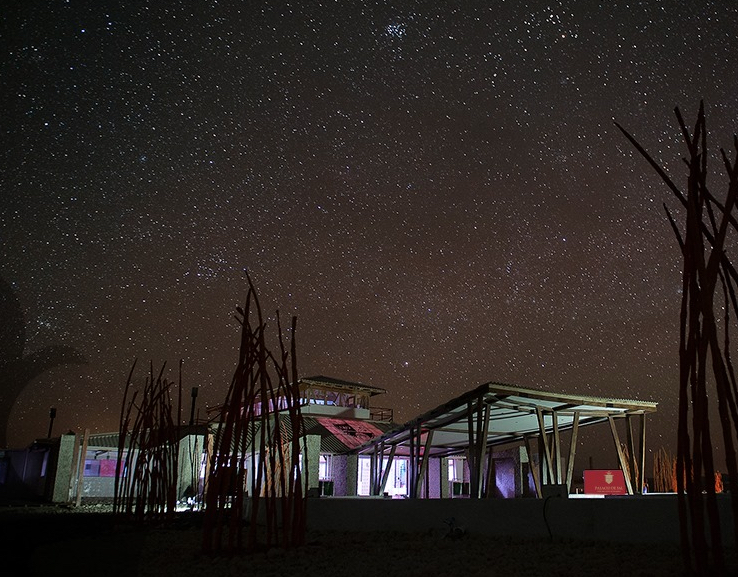 Where to fly: Joya Andina Airport

Palacio de Sal is the first salt hotel in the world, meaning that you should expect nothing out of the unordinary when you book your stay. Aside from your room (made up entirely of salt, of course), guests can also enjoy a games room, boutique, and a breathtaking view of the stars.

Pro tip: Stay salty by visiting the Salar De Uyuni, the world's largest salt flat in Bolivia. Be sure to schedule your tour between November and May for easier travel on the salt flat, and follow this guide to make the most of your trip.

Where to fly: Santiago Airport, then La Araucanía International Airport

The Magic Mountain Hotel in Chile is reminiscent of a woodland fairytale, nestled in between the Andes with a monkey bridge providing the only access to the hotel. Fall asleep the sounds of an artificial waterfall running just outside of your window and wake up to endless greenery and fresh mountain air.

Pro tip: Keep the fairytale going with a horseback riding tour of the Huilo Huilo Reserve. 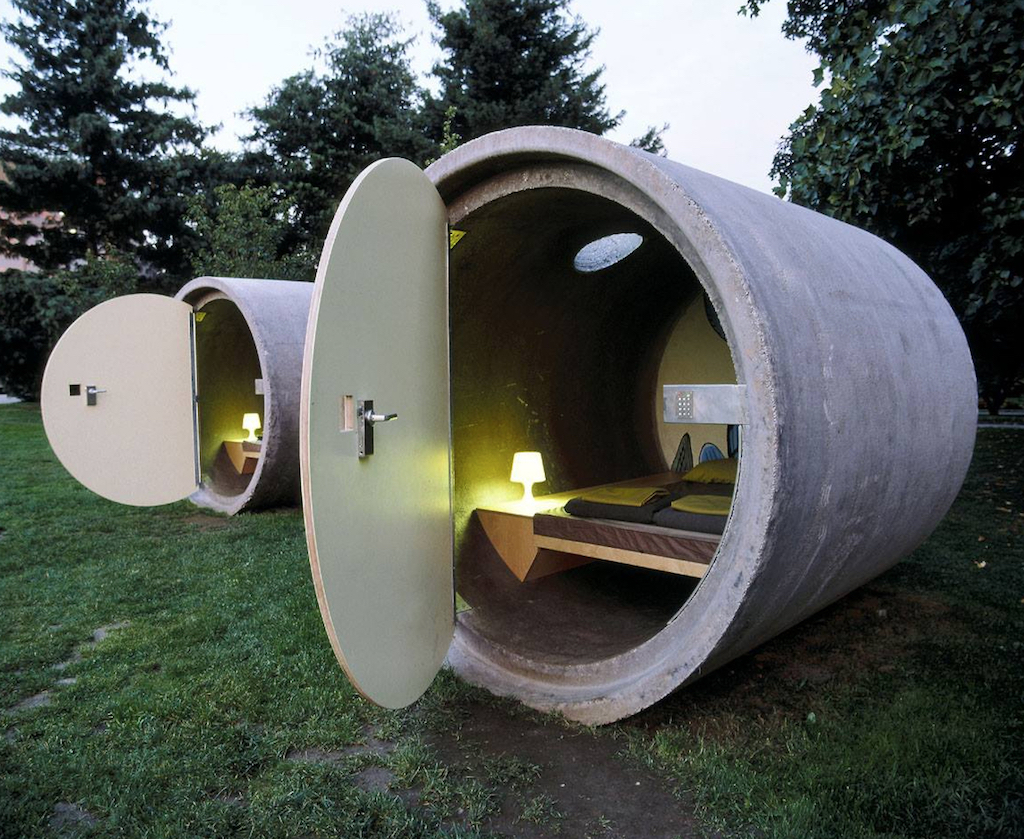 Where to fly: Salzburg Airport

The Das Park Hotel takes tiny living to the next level in these barrel-sized rooms with just enough room for a quaint-sized bed. What makes this hotel so unique is the pay-as-you-wish program, which allows for guests to fork over whatever they can afford to pay for their stay—even if it's next to nothing.

Pro tip: Calling all technology nerds: the Ars Electronica Centre in Linz is a step into the future—and we're totally behind their mission.

And for more amazing feats of architecture, check out these 23 Castles So Jaw-Dropping You Won't Believe They're in the U.S.

Where to fly: Spokane International Airport

The Dog Bark Park Inn—only dog lovers need apply to this shrine of man's best friend in Cottonwood, Idaho. Though it's a relatively bare-bones experience, you'll find images of dogs covering nearly every panel of space in these uniquely designed rooms. And of course, your pooch is welcome any time.

And for more quirky destinations, check out these 20 Stunning New Uses for Old Firehouses You Have to See. 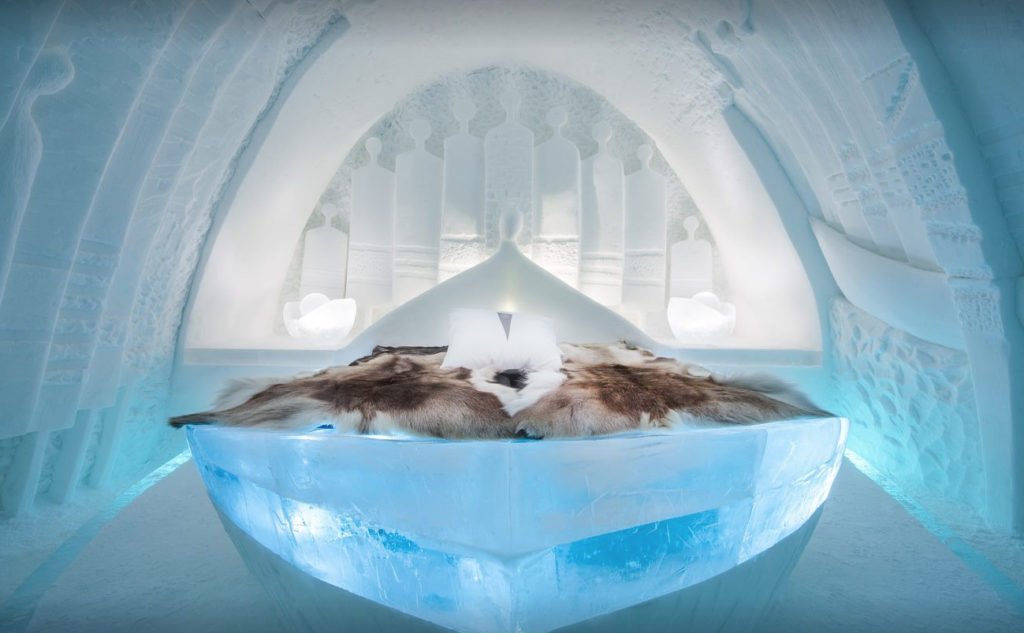 Where to fly: Stockholm Arlanda Airport, then Kiruna Airport

While ice isn't normally synonymous with comfort, the Icehotel in Jukkasjärvi, Sweden, proves that a compromise can be made. Every year, the hotel is reinvented with new ice sculptures, carving away luxe bedrooms and entertainment centers with all of the comforts of home—and then some.

Pro tip: Book your room between the months of October and March to witness one of Earth's greatest natural phenomenons—the Northern Lights. The hotel boasts some of the best views of the arching colors in the entire world.

Where to fly: Madrid International Airport

Designed by Frank Gehry in 2006, the Hotel Marqués De Riscal has become a highly sought-after contemporary treat for architecture aficionados and travelers alike. Rest easy knowing that every inch of your room has been designed to ensure you have the most luxuriously chic experience possible.

Pro tip: In fact, even wine connoisseurs have something to gain by booking a room, as the area boasts some of the best wine tours in the world. 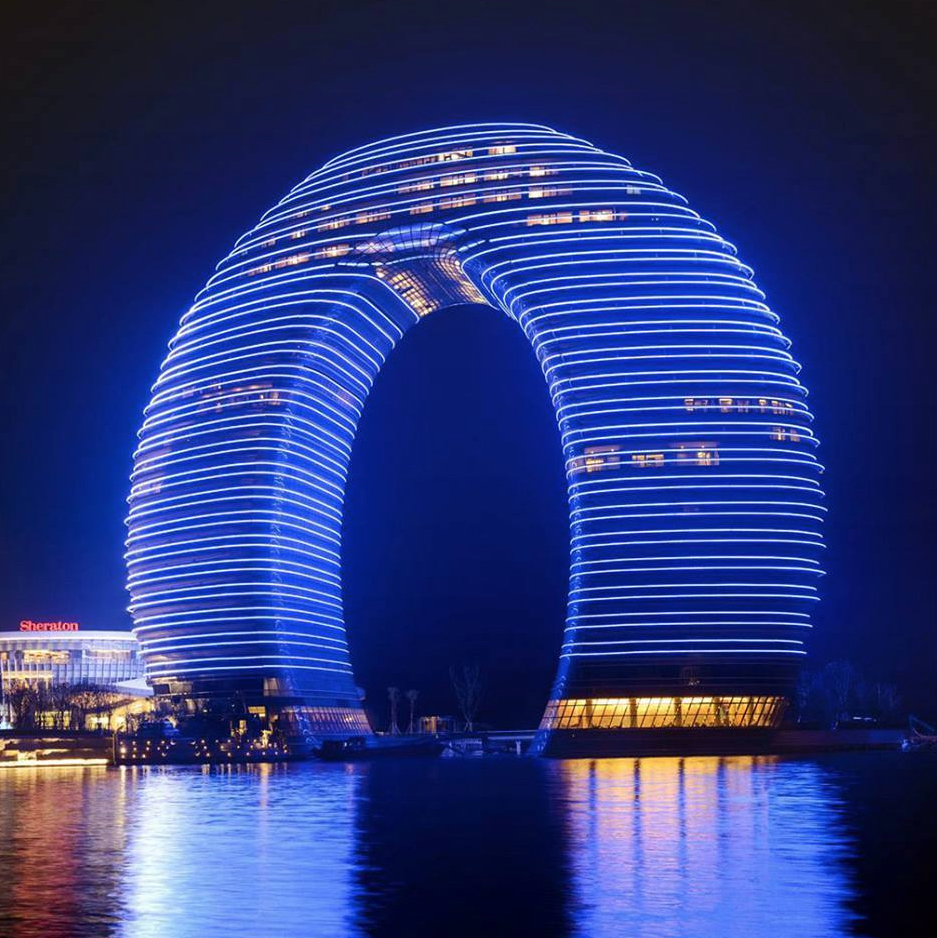 Also called the "Doughnut Hotel," the Sheraton Huzhou Hot Spring Resort resting right on the waterfront in Huzhou, China is more than just an impressive feat of architecture—it's a five-star luxurious resort with a state-of-the-art spa, outdoor pool (with incredible views of the sea), and four top-tier restaurants.

Pro tip: While you're in Huzhou, China, take a tour of the Nanxun Old Town via the scenic canal system, snaking its way through Huzhou's hidden oasis. 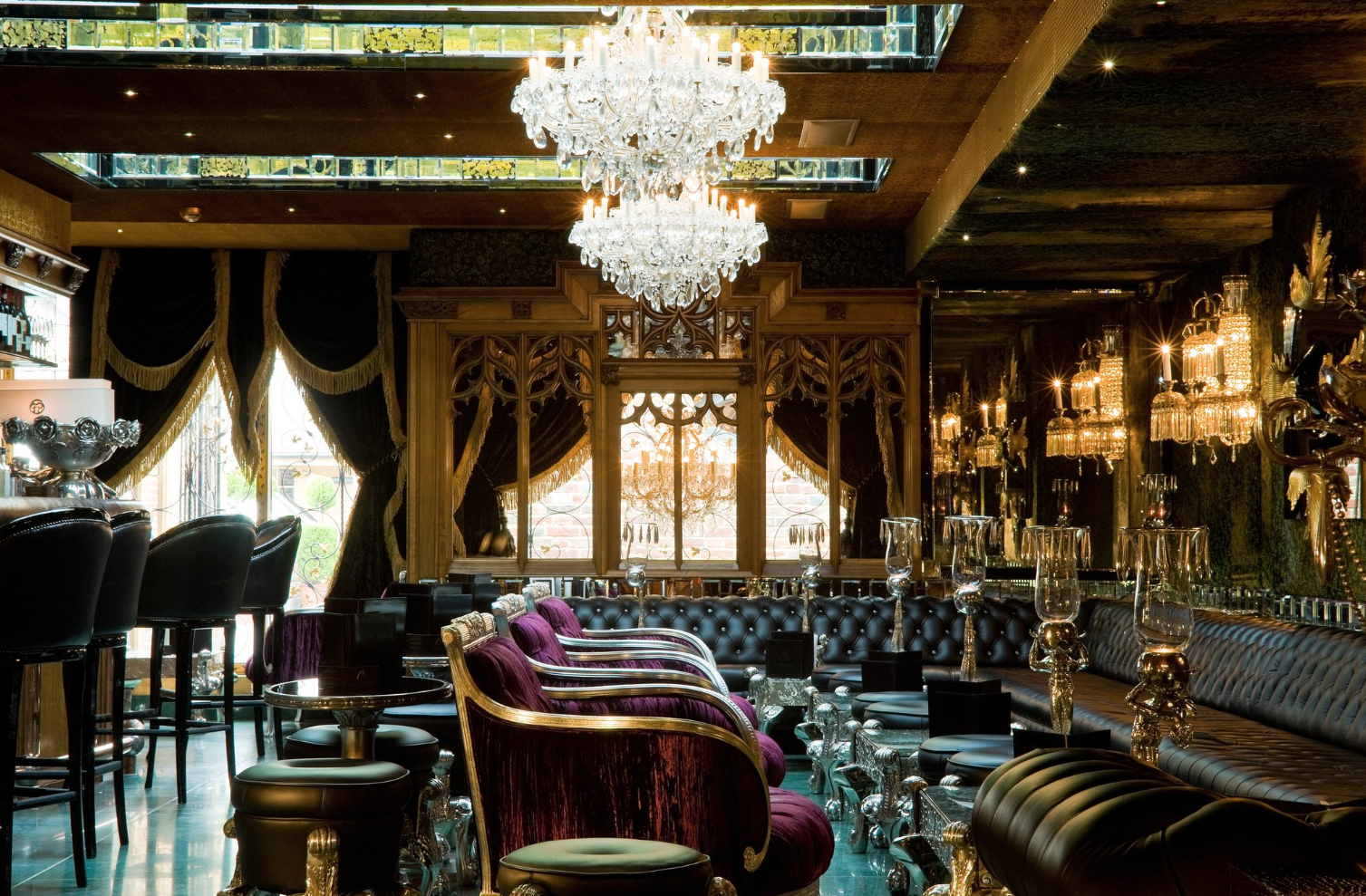 Where to fly: Heathrow Airport

While its exterior may suggest that your stay at The Crazy Bear will be a docile one, upon entering, guests quickly realize that they're in for a much stranger treat. Pamper yourself with Crazy Bear's eclectic mix of decorated boudoirs, opulent chandeliers, huge gilded mirrors, heavy tasseled drape curtains, and swaths of color dripping from every corner of the hotel. 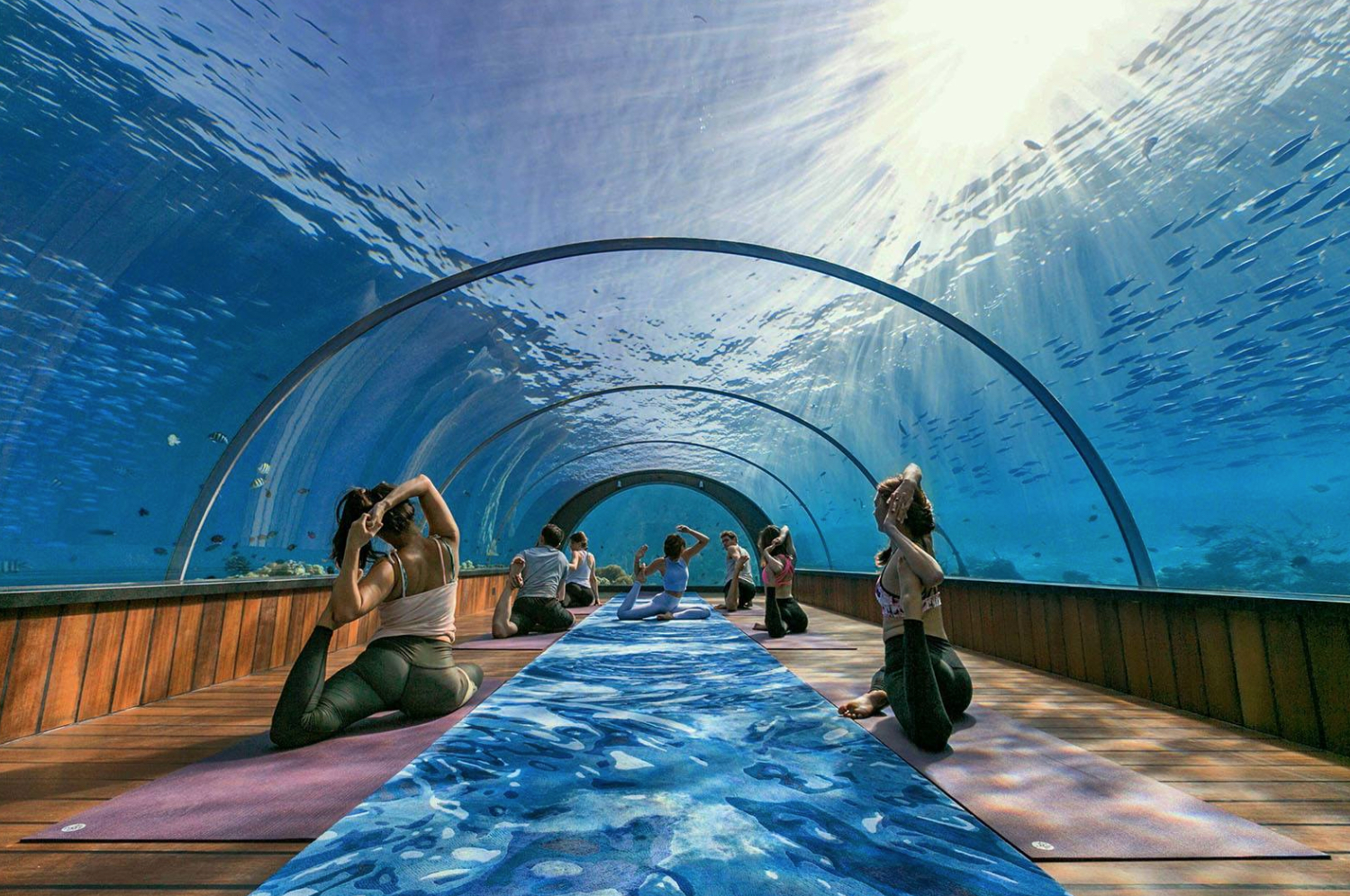 Where to fly: Male' International Airport, then board a seaplane to the hotel

Pro tip: The coral reefs surrounding the resort are a sight not to be missed, so be sure to set a day aside for some underwater escapades.

Instead of getting your pilot license, you can now experience the satisfaction of commanding your own cabin at Costa Verde Hotel in Costa Rica. This former Boeing 727  has been converted to feature comfortable and chic living quarters in the balmy coastal rainforest.

Pro tip: While you're there, take a quick excursion to Adventure Park for ziplining through the lush rainforests of the Manuel Antonio National Park. 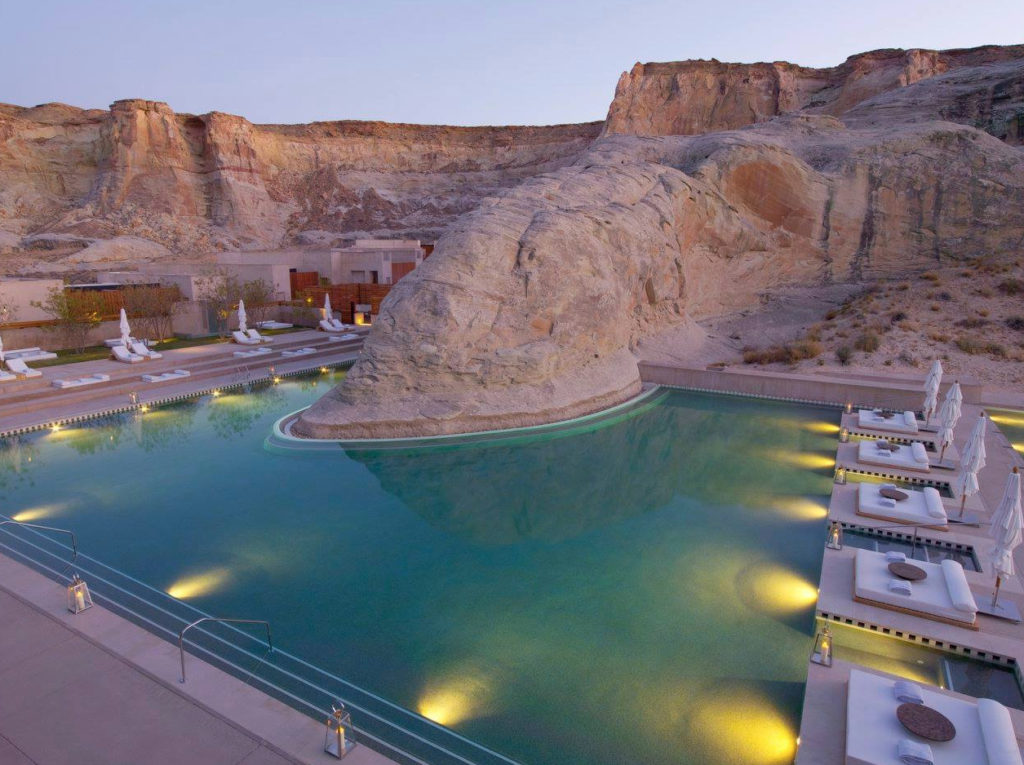 Where to fly: McCarren International Airport

Become one with the Utah desert in the Amangiri resort, featuring dazzling geography from every hotel room. Go for a swim in the luxurious outdoor pool, or revel in the 5-star amenities offered in the restaurant or spa, just a short walk from your room.

Pro tip: Book a hot-air balloon ride for the best views of the desert sunrise over Amangiri resort.

Where to fly: Brussels International Airport

In case you ever wanted to know what it feels like to sleep inside a giant intestine. (It's not real, of course.)

Pro tip: To truly get your digestive juices flowing, stop for a bite at Graanmarkt 13, where most of the dishes are infused with delicious honey. 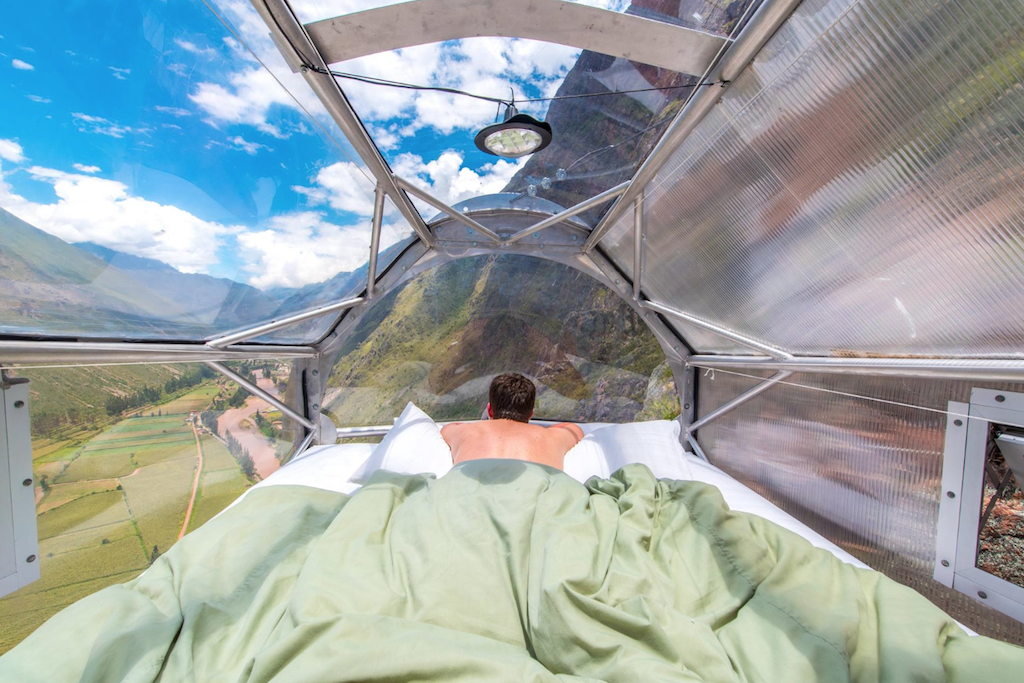 If you're afraid of heights, you might want to think twice before reserving your stay at Skylodge Adventure Suites in Sacred Valley, Peru. These transparent luxury capsules (pictured above) offer unobstructed views of the valley right from your be—meaning that you don't even have to leave your bed to capture these mountain views.

Pro tip: If you're finally ready to leave the comfort of your capsule, soar down the mountain on the Sacred Valley Zip Line.

Where to fly: Stockholm-Västerås Airport

Formerly a working silver mine, the Sala Silvermine Hotel can help you find your serenity deep underground, complete with guided tours and fine dining. 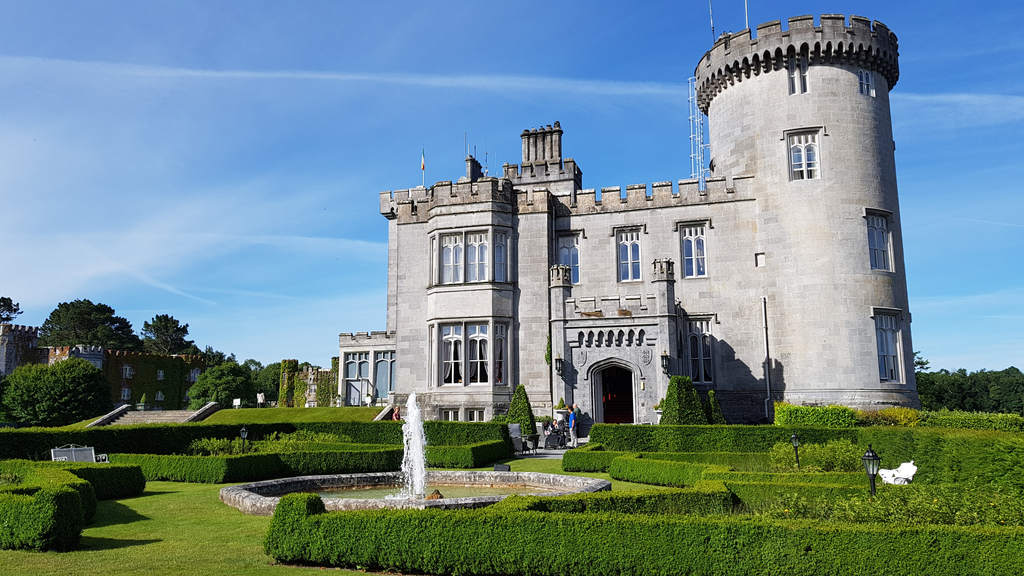 Where to fly: Dublin Airport

While we'll never be royals, a stay at Dromoland Castle can almost bring you close to royalty status with sweeping entryways and dramatic rooms facing the lush grounds. Though the hotel boasts ancient architecture, the spa and daily activities give your stay just a touch of modernity.

Pro tip: While you're staying at the castle, keep an eye on the weekly programme of events, as they often involve falconry, archery, and horse-drawn carriage rides through the vast estate. 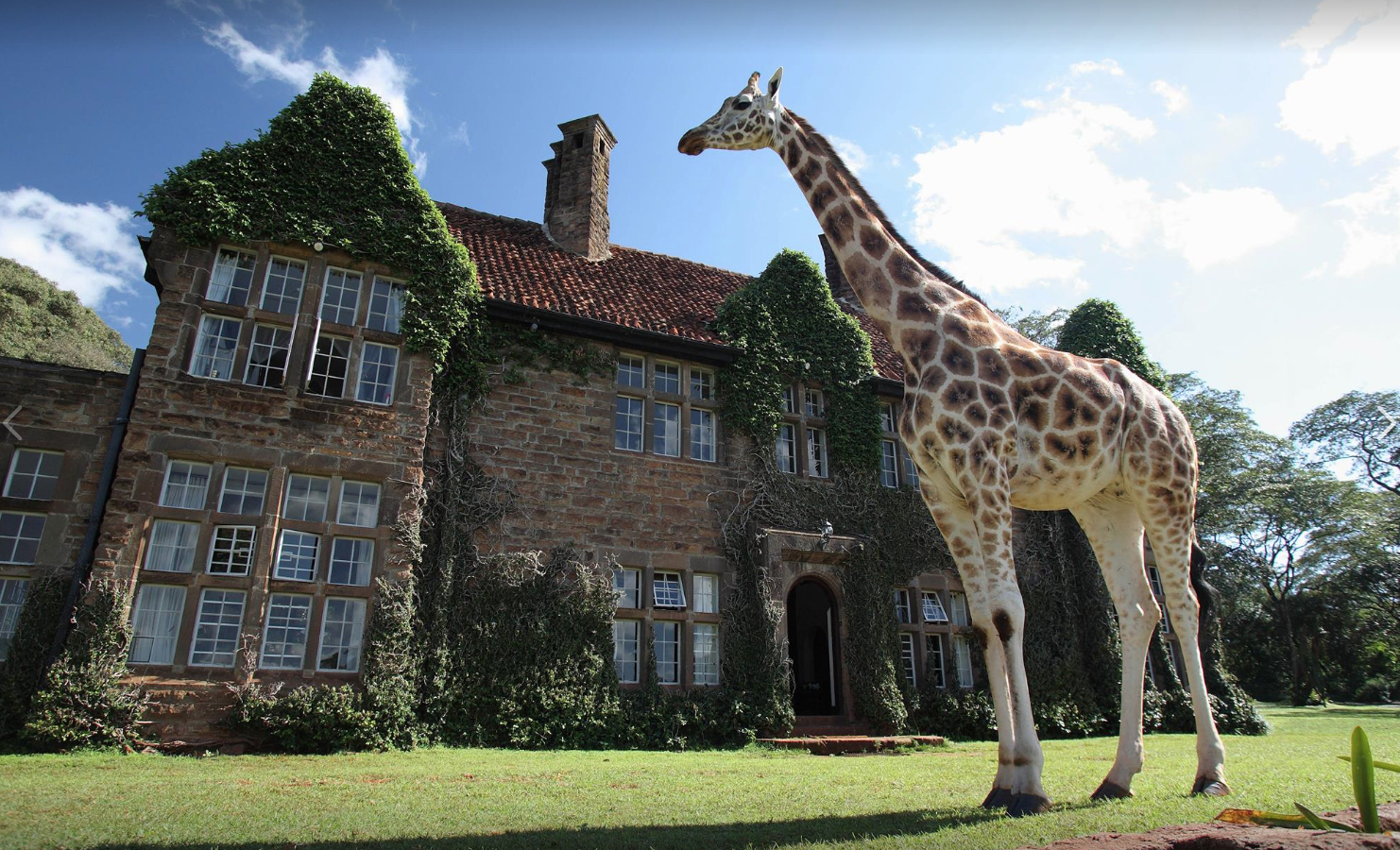 This boutique safari hotel allows guests to up close and personal with the giraffes on the estate—so much so that you have to keep a careful watch over any meal consumed on its premises, as they are likely to swoop in and have their fill of Giraffe Manor's fine dining.

Pro tip: As it turns out, giraffes aren't the only wild animals vying for your attention at the hotel. Visit the David Sheldrick Wildlife Trust to meet (and adopt!) adorable baby elephants. If you need further reasons to bring home a baby animal (as if), learn the 15 Amazing Benefits of Adopting a Pet.

Where to fly: Helsinki-Vantaa Airport, then Ivalo Airport

Located deep in the forest, the Kakslauttanen Arctic Resort is Finland's best-kept secret. Enjoy all of the mysteries of the Arctic Circle tucked away in your state-of-the-art glass-enclosed hut—and be sure to stay up late enough to view the majestic Northern Lights.

Pro tip: Be sure to book your stay during Aura season for optimal Nothern Lights viewing from late August until the end of April.

Where to fly: Heathrow Airport, then Chhatrapati Shivaji International Airport

This floating palace, located on a remote island only accessible by boat, is dripping with opulence. With breathtaking views of India and truly unique dining and shopping experiences, there is more than enough adventure and luxury to be found at Taj Lake Palace.

Pro tip: Book a Heritage Walk for a trip down memory lane with island historians. 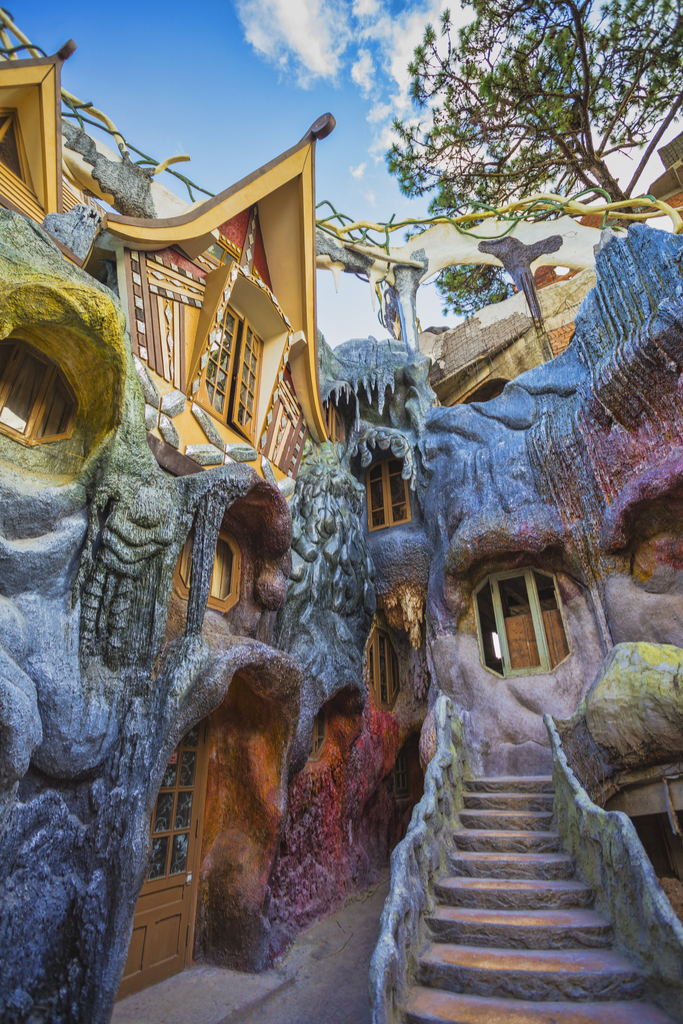 Book your trip to the wild side with a stay in the Hang Nga Guesthouse, designed by Hang Viet Nga, featuring magical twists and turns all in one treehouse mimicking the dark and mystical Alice and Wonderland themes that we love so much.

Pro tip: Choose your themed room wisely—I would steer clear of the tiger room featuring a pair of searing yellow eyes. Well, that is, if you'd like to have a restful stay.

And for more destinations closer to home, check out these 50 Destinations So Magical You Won't Believe They're in the U.S.

Ashley Moor
Ashley hails from Dayton, Ohio, and has more than six years of experience in print and digital media. Read more
Filed Under
Hotels • Vacation
Read This Next
Latest News
Read This Next