Seeing them up close is incredibly rare.

Beachgoers were treated to the spectacular sight of a giant 14-foot-long squid carcass washed ashore on Scarborough Beach, in Cape Town in South Africa. These deep-ocean dwellers (known as Architeuthis dux) are elusive creatures and rarely seen until they die and float to the surface. "It's not uncommon to have a giant squid wash up, but it's not a daily occurrence," says City of Cape Town coastal manager Gregg Oelofse. "The last one washed up at Kommetjie about seven months ago. These are deep-ocean dwelling creatures that wash up from time to time." Read on to learn how the squid ended up on the shore and the mysteries these legendary creatures are hiding.

The squid that washed up on the beach wasn't just a large squid—it was a giant squid. Giant squids can grow up to a whopping 59 feet and generally live 1,640 to 3,280 feet (500 to 1,000 m) beneath the ocean surface in very cold waters. The giant squid has the largest eyes in the animal kingdom at 10 inches in diameter. "Although other large squids exist, I am fairly certain this is a true giant squid," Mike Vecchione, a National Oceanic and Atmospheric Administration invertebrate zoologist, told Live Science. Keep reading to see the video.

2
How Did the Squid Die?

Vecchione says that without a proper autopsy, it's difficult to know how the creature died. "Note that most of the skin has abraded and some of the arms are broken off, but this (especially the skin abrasion) can result from washing up on the rocky shore," he says. "Strandings of Architeuthis on South African shores are not unusual at all. It is one of several places around the world where they show up regularly." Samples of the squid have been sent to the Iziko Museum in Cape Town for testing.

3
Was It An Accident?

One theory is the giant squid might have been hit by a ship propeller while trying to feed. "But this is difficult to prove without witnesses," Dylan Clarke, a marine scientist and curator at Iziko Museum, tells News24. "The literature … suggests that they come up into shallower waters because they display a behavior called diel vertical migration. In other words, they venture into shallower waters during the evening to feed and migrate back to deeper waters during the day. The availability of information on giant squids is relatively poor and is either based on dead or dying animals that have been washed ashore or captured in commercial trawl nets." 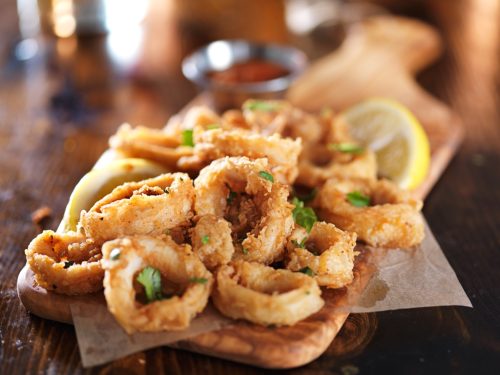 The giant squid is a relative of the squid people commonly eat as calamari. "When we look at a giant squid, we're looking at a family member of the calamari we eat. They live deep in the ocean and can grow to enormous sizes, of around 10 to 13 meters (32-42 feet)," says Dr. Judy Mann, the executive of strategic projects at the Two Oceans Aquarium Education Foundation. "These animals live in a water environment, and that water helps support their body weight. That's why we see such large animals living in oceans."

5
The Mysteries Of the Deep

Very little is known about the giant squid—for example what they eat, how they mate, even if they make any sounds. "Why in the world are giant squid so hard to find and film alive in their natural habitat?" says Dr. Clyde Roper, a zoologist at the Smithsonian's National Museum of Natural History since 1966. "Giant squid are probably not rare, as was once thought. In fact, since sperm whales regularly feast on them, giant squid must be quite abundant, perhaps numbering in the many millions within the ocean's vast inky depths. But they are hard to find because they occur at depths where it is challenging and expensive to work."

Ferozan Mast
Ferozan Mast is a science, health and wellness writer with a passion for making science and research-backed information accessible to a general audience. Read more
Filed Under
Extra • News • Science
Read This Next
Latest News
Read This Next