Horror unfolds on sunny day in the park.

People enjoying a sunny day in a Valencia, Spain, park witnessed a shocking scene when a man appeared to be attempting to drown a woman in a nearby fountain. Luckily, a group of men jumped into the fountain to rescue the woman and subdue the man. Read on to find out what could have provoked someone to attempt forced drowning in broad daylight, what nearby Good Samaritans heard and saw, and what the man is facing now time in prison.

At first, it appeared to be a typical summer scene: a man and woman relaxing in a water fountain within a park on Tuesday. But according to local media reports, things soon went awry: A passer-by offered to take the couple's picture, but when they handed over a phone, the interloper ran off with it.

According to media reports, the man became enraged about the theft and blamed the woman. Shocking video appears to show him holding her by the hair and pushing her head toward the water in the fountain. "He's going to kill her," an observer is heard saying. People are also heard demanding that the man release the woman. 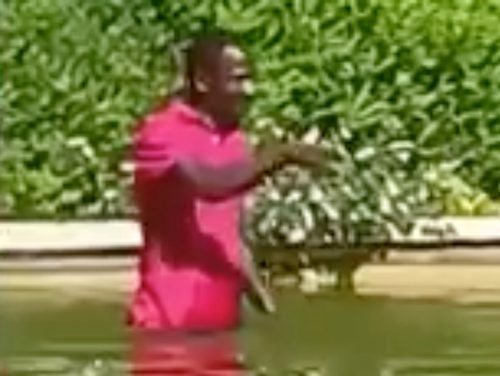 The alleged attacker was treated for a cut eyebrow and cheekbone, and the woman was treated for bruising after the struggle. The 52-year-old man, whom authorities have not named, was arrested and charged with attempted murder.

If you're experiencing domestic violence or know someone who is, you can call the Domestic Violence Hotline at 800-799-7233, where multilingual support is available. You can also consult the National Center for Domestic Violence at nrcdv.org. States and the federal government also provide resources for domestic violence survivors; look online to see what is available in your area. And of course, if you or someone you know is in immediate danger, call 911.