If You're Taking Tylenol With This, Your Liver Is in Danger, Experts Say

Medical professionals warn of the risks associated with this particular pain reliever.

Tylenol is one of the most popular over-the-counter medications for managing pain, reducing fever, and treating the symptoms of allergies, colds, coughs, and headaches. The brand name of acetaminophen is recognized by patients all over the world, but experts warn that a common risk factor of this popular medication is overlooked by many: If combined with alcohol, Tylenol can cause major damage to your liver. For the full story on the risks of mixing alcohol with Tylenol, read on, and for more medication advice, check out If You're Taking This OTC Medicine More Than Twice a Week, See a Doctor.

Alcohol mixed with acetaminophen is a recipe for disaster.

Acetaminophen also occurs in other over-the-counter medications including Alka-Seltzer Plus Cold & Sinus, Excedrin, and Robitussin Cold Cough and Flu. WebMD further cautions that "one of the most common causes of severe liver damage—including some cases requiring a liver transplant—is a combination of the pain reliever acetaminophen…and alcohol." And for more health advice delivered right to your inbox, sign up for our daily newsletter.

But it's not just Tylenol-plus-alcohol that puts your health in danger.

Experts warn that a whole host of over-the-counter medications can react badly with alcohol in different ways. Ibuprofen, the active ingredient in Advil, "can cause gastrointestinal bleeding, ulcers and stomach perforations in people who take chronic ibuprofen treatment," Williams College advises. Since it can cause severe toxic effects to the kidneys, they say to "avoid alcoholic beverages" with ibuprofen.ae0fcc31ae342fd3a1346ebb1f342fcb

Aspirin, the active ingredient in Bayer, "can cause severe stomach upset. … Alcoholic beverages can aggravate the stomach irritation caused by aspirin." And for more on medicating safely, check out This Is When You Should Take Tylenol Instead of Advil, Doctors Say.

Taking Tylenol for this many days poses a real risk.

WebMD advises that while acetaminophen is self-prescribed, it shouldn't be taken for more than three days consecutively for fever unless advised by a doctor. It shouldn't be taken by adults for more than 10 days for any other reason, or five days for children. And for more meds to avoid at the moment, check out If You're Taking This Medication, the FDA Has a New Warning for You.

The risk is serious, and it's a widespread problem. 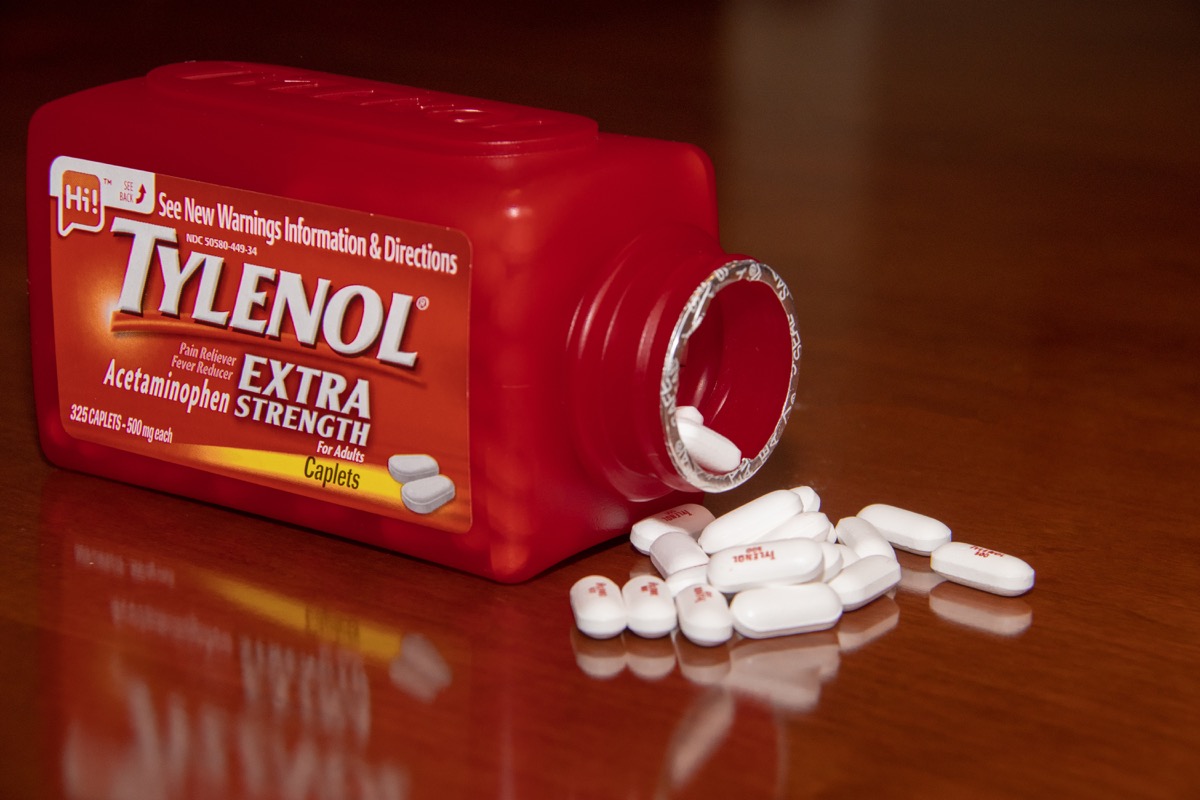 In their advice, they remind patients that just because a drug is readily available, it doesn't mean that it doesn't have potentially serious effects. "Exceeding the recommended dose of acetaminophen can result in severe liver injury," the American Addiction Centers notes. "Alcohol increases this risk."

For safety's sake, avoid alcohol completely while taking pain relievers and always follow the manufacturer's and your pharmacist's advice. And for more dangers to be aware of, check out If You Combine These 2 OTC Medications, You're at Risk of an Overdose.