Phil and Jane Carter are used to seeing wild animals in the garden of their Ilkeston, Derbyshire home—but even they were utterly shocked to see a two-legged fox walking upright around the property. They managed to get video footage of the creature before it took off "like a rocket," and the couple are still amazed by the incident. "It was fascinating," Phil, 71, told The Telegraph. "It stood bolt upright and ran like a human being on two legs. It just had two little fairy stumps at the back." Here's what video footage of the clever canine shows.

The Carters were putting up their Christmas tree on December 17 when Jane spotted the fox in their garden. "My wife saw it, she then shouted at me and I came through to the kitchen with my camera on my phone," Phil says. "I thought she was joking at first or had misseen it. It was 3pm in the afternoon and I thought it could have been a trick of the light but no, there it was, bright as day walking about on just two legs." 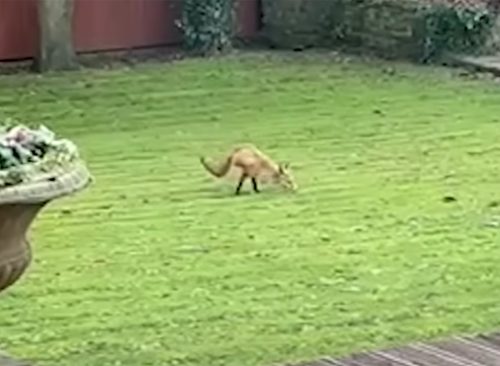 The fox stayed in the garden for 45 minutes before taking off. Phil consulted with experts from Derbyshire Nature Reserve, who believe the fox was most likely born with just two legs. "The experts believe it was most likely born that way, because if it had been run over by a car or hit by a combine harvester then the whole of its back would have been damaged, which doesn't appear to be the case," Phil says.

A spokesperson for the Fox Project charity believes the creature has adapted well to having two feet, most likely with the help of humans. "The way that the legs look, it looks more like it's been a disability from birth and that's probably how it's adapted to be on two legs – its overall condition for two legs looks quite good," she says. "Potentially people around there would have supported it from birth."

The spokesperson believes humans might have been feeding the two-legged animal. "If it was an accident you would have more of the legs there, and if it had been amputated after an injury you would still have the top of the hip joints moving. Any vet would never take both back legs off, so it hasn't been interfered with by a human. I would say people have potentially supported it from it being like that from quite small – if it was to fend for itself it would not be as it seems. So if it gets food it's probably been left out by people."

The spokesperson also believes it's possible the fox is still being taken care of by its mother and siblings. "But it's most likely it has a food source from somebody unless other foxes are supporting it. If it's one of this year's cubs and mum and other cubs are around they might bring food back to it if they know it can't get as much food for itself. They're very social animals – they look after each other when they can."

Ferozan Mast
Ferozan Mast is a science, health and wellness writer with a passion for making science and research-backed information accessible to a general audience. Read more
Filed Under
Animals • Extra • News • Viral Videos
Read This Next
Latest News
Read This Next