It could be result of a “Vampire Epidemic.”

Archaeologists have unearthed the remains of a female "vampire" at a cemetery in Poland, researchers said this week. What's more, the discovery isn't the first—and it's far from the most recent. Read on to find out who was the "vampire" woman, how she was buried, how her front tooth could have decided her destiny, when other similar burials have been discovered and how it could have inspired pop culture's portrayal of vampires—including famous vampire-slayer Van Helsing.

1
Woman Found With Sickle Around Neck

A research team led by Professor Dariusz Polinski of Nicolaus Copernicus University made the surprising discovery last month. They came across the remains of a woman—with a sickle around her neck and a triangular padlock on her foot—at a gravesite in Pień. The farming tool, according to ancient beliefs, was supposed to prevent a deceased person thought to be a vampire from returning from the dead.

2
She Was a Rich Woman

According to The History Blog, "the woman was buried in an unusual manner and with great care, which is surprising given traditional anti-vampiric customs. She had a silk cap on her head, which was very pricey in the 17th century and, according to archaeologists, indicates high social status."

Magdalena Zagrodzka, a representative of the research team, said the sickle and padlock "may have protected against the return of the deceased, which was probably feared. In this context, these practices can be considered so-called anti-vampiric." The sickle was placed with the blade on the neck, to cut the deceased person's head if it tried to rise.

4
Lack of Orthodontic Care Could Have Decided Her Fate

There was something else that caught the attention of the archeologists: the woman had a protruding front tooth. This could be a reason why superstitious locals mark her as a vampire. "Such deviations from the norm (as well as a hump, lame leg, birthmarks or even clumping eyebrows) were enough to suspect that after death someone would become a vampire or Strzyga (or Striga if you are a fan of the popular Witcher TV series on Netflix) returning from beyond the grave, spreading diseases, attacking animals and people," says Adam Weglowski, a Polish writer and vampirism expert.

Experts say this type of burial became common in 17th-century Poland, in response to a purported vampire epidemic. Polanski said that sometimes corpses were burned, smashed with stones, or had their heads and legs cut off. Scientists plan to investigate the gravesite with advanced technology, and researchers from the University of Krakow plan to conduct DNA testing on the remains to learn more about the woman who was found. "Such a discovery, especially here in Poland, is astonishing, especially now — centuries later," he told CBS News. "Pure astonishment."ae0fcc31ae342fd3a1346ebb1f342fcb

But it's not the first vampire hunting expedition to bear fruit in the country. Archaeologists led by Lesley Gregoricka of the University of South Alabama found six similar "vampire skeletons" at a cemetery in Poland in 2014. Each body was staked down with sickles or had a stone placed in or under its jaw.

7
But Superstition Was The Most Likely Cause

"We were surprised to learn that the Drawsko 'vampires' were local to the area," says Gregoricka. "We expected that these individuals were targeted for deviant burial because of their status as outsiders to the community." Instead, the team surmised those six people were early victims of the cholera epidemics that hit Eastern Europe at that time. "The spread of diseases like cholera was very poorly understood in the 17th century," says Gregoricka. "So people turned to the supernatural to make sense of death and misfortune."

8
The Real Van Helsing Was Skeptical About the Vampires 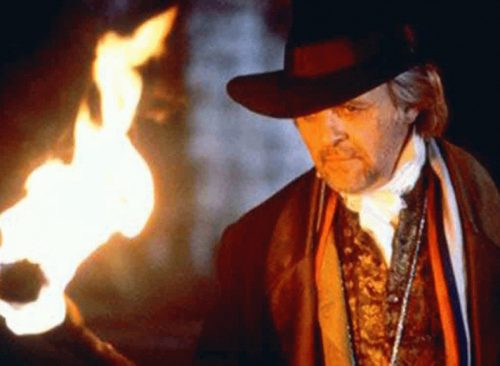 "The so-called 'anti-vampire practices' observed in Eastern Europe and the stories of the undead returning from beyond the grave fertilized the imagination of Western writers in the 19th century who invented the figure of a vampire as we know it today," says Weglowski. He also claims that the famous pop culture character, vampire-slayer, and Dracula's nemesis, Abraham Van Helsing was based on Georg Andreas Helwing, an 18th-century Lutheran pastor and a well-known botanist of his time who spent most of his life in Angerburg (today Węgorzewo, Poland).

You may remember Van Helsing portrayed by Anthony Hopkins in Francis Ford Coppola's Dracula or Hugh Jackman in the horror movie Van Helsing. According to Weglowski, the original Helwing was more skeptical about the possibility of existing vampires than the pop culture Helsing was. But he was just as relentless about fighting superstition, as van Helsing was about fighting vampires.