Hair-Raising Moment Sailors Enter Mysterious "Ghost Ship" Drifting Hundreds of Miles From Bermuda. "I Hope I Don't Find Any Dead Bodies or Anything."

Two sailors got the shock of their lives when they saw an abandoned sailboat floating 800 miles from Bermuda. The ship had no one on board, and Matt Rutherford and his colleague from the Ocean Research Project were afraid the crew were in trouble.

It was only when they climbed on board they realized there was no one else on board with them, and the engine was off. The ship was actually discovered in 2013, and the sailors are only just sharing the new footage. Here's what it shows. 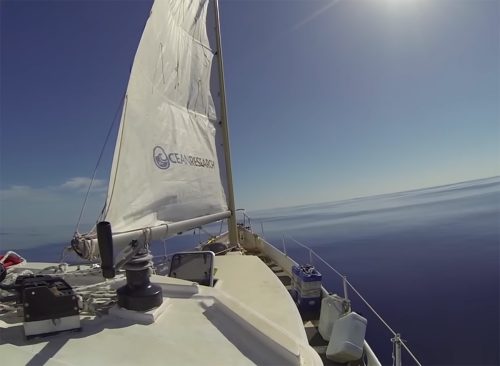 Rutherford and his colleague spotted the ship, noticing that the sail was not up and it was "behaving strangely." "This is one awfully abandoned sailboat," Rutherford said in a video. "Wolfhound from the Irish Yacht Club. I have no idea what's inside. I'm going to go search around and I hope I don't find any dead bodies or anything crazy like that."

Upon boarding the boat, Rutherford discovered signs of people having left in a hurry. "Parts of the ceiling had fallen down in some places," Rutherford explained. "Some drawers had popped open, you could hear the water sloshing around … It was just the spookiest thing. It looked crazy in there. Like people had abandoned it in the middle of something."

Rutherford noticed clothing and belongings strewn all over the floor. "This is absolutely crazy by the way," he said. "Here I am, 800 miles from Bermuda, 1,500 miles from the United States, standing on a very nice Swan 48, in the middle of the ocean. Just this morning, I woke up on a 42-foot Colvin Gazelle."ae0fcc31ae342fd3a1346ebb1f342fcb

It turns out the boat was reportedly abandoned ten years ago after a vicious storm damaged the ship, and the crew sent out a distress signal. Alan McGettigan of the Royal Irish Yacht Club was the skipper of the boat and ended up being rescued by a Greek freighter.

The ship was brand new when it was damaged and on its maiden voyage from Connecticut to Bermuda and then Antigua. Rutherford contacted the captain of the abandoned ship, who offered them a reward if they towed it back in. Unfortunately, this was impossible, as it was too large for their own small sailboat.

Ferozan Mast
Ferozan Mast is a science, health and wellness writer with a passion for making science and research-backed information accessible to a general audience. Read more
Filed Under
Extra • News • Viral Videos
Read This Next
Latest News
Read This Next