If You Notice This in Your Pantry, Grab a Mask and Gloves, CDC Warns

These items can potentially be deadly if they've sat around for too long.

Keeping stock of what's in your pantry can be a great way to avoid overbuying unnecessary items. But even for some of the organized kitchen keepers, it can be easy to lose track of certain things over time. Fortunately, unlike that spinach in your fridge's crisper drawer, most items in your cabinets are designed to be stored for quite a bit of time. But according to the Centers for Disease Control and Prevention (CDC), there's one item that you should throw away immediately when you come across it in your pantry. Read on to see what major health hazard could be lurking in your kitchen.

RELATED: Never Eat Leftovers That've Been in the Fridge This Long, Experts Warn.

Cans that are puffy, swollen, or leaking should need to be safely thrown away immediately.

Stocking up on canned goods might be a great way to make sure there's always food on hand, but there's still a limit to how durable they can be. The CDC warns that any store-bought or homemade items in cans that appear puffy, swollen, cracked, or otherwise abnormal should be thrown out using the appropriate methods. This is especially true of home-canned items, which have a shorter shelf life than industrial canned foods.

"It is the recommendation from the [United States Department of Agriculture] that all home-canned goods be used within one year," Kathy Savoie, food safety professor with University of Maine Cooperative Extension, told Bangor Daily News. "Beyond that, it should be disposed of."

Disposing of suspicious cans requires an extra level of precautions to keep yourself safe.

If you notice any suspicious cans in your pantry that are bulging or appear abnormal, you'll need to go the extra mile to make sure you dispose of them safely due to the risk of botulinum toxin. "There are specific recommendations on how to clean up home-canned goods," Savoie told Bangor Daily News. "Since botulism is incredibly deadly, it is something you want to avoid."ae0fcc31ae342fd3a1346ebb1f342fcb

According to the CDC, you should put on rubber or latex gloves before handling any suspicious or puffy cans since botulinum toxin can still enter the body through tiny openings in the skin. Cans with their lids intact should be placed in a sealable bag before being placed inside another sealable bag and taped shut tightly. They should then be put into the non-recyclable trash outside of your home and out of reach from people or pets.

RELATED: The CDC Just Released a Warning That You Shouldn't Eat This Right Now.

You should detoxify any leaking cans before throwing them in the trash.

If the cans appear to be leaking or unsealed, Savoie recommends donning a mask or respirator as well as gloves to avoid breathing in mold or mildew spores. You should then detoxify the items by carefully placing them on their side in a large pot and adding water until the cans are covered by an inch. After boiling for 30 minutes, dispose of them in the same way as intact suspicious cans by wrapping them in two sturdy, sealable bags before placing them in the non-recyclable trash outside.

The CDC then recommends cleaning any areas touched by the canned products by treating the area with a solution of one part bleach to five parts water and letting it stand for 30 minutes. Once finished, make sure to dispose of all towels used to wipe up the solution in a plastic bag before putting them in the trash. You should then be sure to wash any clothing you wore while cleaning with bleach immediately.

For more helpful health news delivered straight to your inbox, sign up for our daily newsletter. 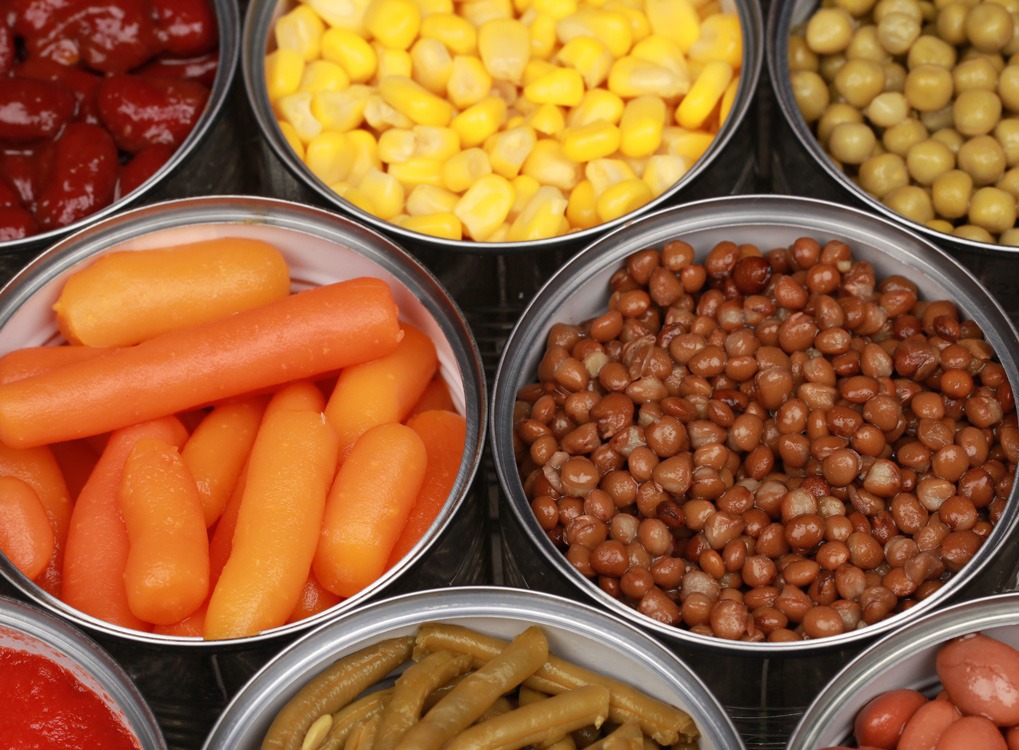 Home canning your vegetables might help extend the shelf life of your summer harvest, but it's also the most common cause of botulism outbreaks in the U.S., according to the CDC. While still relatively rare, the agency reported that there were 210 outbreaks of foodborne botulism reported from 1996 to 2014. Forty-three of the 145 outbreaks that were caused by home-prepared food—or 30 percent of the cases—were from home-canned vegetables.

Savoie recommends keeping a written and dated inventory on hand that can be updated whenever items are added or used to stay on top of what's in your pantry. She also suggests avoiding the temptation to overstock and only store a year's worth of food at a time, pointing out the idea that cans are an indestructible form of food storage is a widely held misbelief.

"There is a time factor when it comes to using canned or home-canned foods," Savoie told Bangor Daily News. "Canned goods are considered 'shelf-stable,' but it does not mean eternal, despite what the zombie movies say."

RELATED: Never Put This on Your Meat After Barbecuing, CDC Warns.

Zachary Mack
Zach is a freelance writer specializing in beer, wine, food, spirits, and travel. He is based in Manhattan. Read more
Filed Under
Food • News • Safety
Read This Next
Latest News
Read This Next