If you blinked, you might have missed a few strange moments.

Part one of Prince Harry and Meghan Markle's highly anticipated Netflix docuseries finally hit the streaming service this week. We did learn how exactly the controversial couple met, fell in love, and started falling out of love with being royalty. There were also a few bizarre moments that stood out, some in a rather cringe-worthy way. Here are the most eccentric elements of the docuseries that most people missed.

1
They Use Their Initials, A Lot

Throughout the show, Harry & Meghan refer to themselves almost with just initials quite a bit. This might be confusing to some, as H&M is also a budget-friendly clothing brand. However, Meghan also has her hubby saved on her phone as "Haz." ae0fcc31ae342fd3a1346ebb1f342fcb

2
They Takes Selfies – A Lot

Many of the images shared in the documentary appear to be selfies. There are also lots of references to selfies throughout. For example, the first time Harry saw Meghan was in a selfie, they took one of themselves on their first date  ("We just wanted to capture the feeling of sitting in that little restaurant," she explained), and they took several in Africa on their third date. 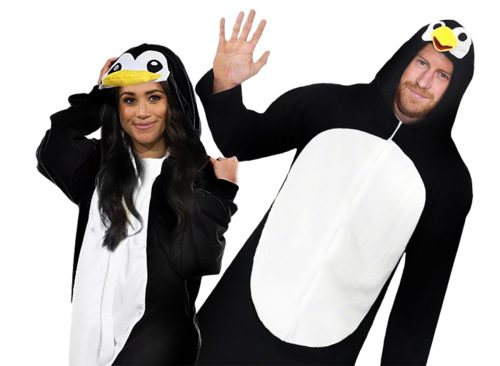 "We had a little engagement party, and everyone was dressed in animal onesies. Meg and Harry were in matching penguin onesies (see artist's interpretation above) because penguins mate for life. And they were so sweet, and we had so much fun," the couple's British friend, Lucy Fraser, says in episode two.

4
They Are Obsessed with Birds

Harry and Meghan seem to have a weird obsession with birds. In one filler scene of the second episode, they spend way too much time trying to make Archie pay attention to hummingbirds drinking from a feeder. And then, in the third episode, there is the owl clip from a walkabout in Nottingham. "Harry's brought his bird to town, so I brought mine," a man tells a reporter.

RELATED: The Biggest Royal Romance Scandals of All Time

For years, people have been wondering how exactly Harry met Meghan. In the show, he reveals that he was immediately attracted to her the first time he saw her – with the famous Snapchat dog filter on. "That was the first thing. I was like 'Who is that?'" Harry went on to ask his friend about the girl in the photo and the rest is history.