If Your Nails Look Like This, Get Your Heart Checked Immediately

This subtle symptom could alert you to a serious heart health issue you can't afford to ignore.

There are few medical conditions considered more catastrophic than a heart attack—and nearly none garner as much attention. Yet doctors say that there's another, more subtle type of heart condition that could be putting you at serious risk: congestive heart failure. Unfortunately, this condition can become deadly over the course of a few short years, with half of patients dying within five years of diagnosis, and only 30 percent living with the condition for longer than a decade.

According to the Centers for Disease Control and Prevention (CDC), roughly 6.2 million Americans are currently living with heart failure, and it was listed as the cause of death on nearly 400,000 death certificates in 2018. Yet without the visibility of better known, more acute heart conditions, many people don't know what congestive heart failure is—let alone what to look out for. Read on to learn one important symptom of the condition that could appear on your nails, and what to do if you notice it.

RELATED: 71 Percent of Women Notice This a Month Before a Heart Attack, Study Says.

Here's what you should know about congestive heart failure. 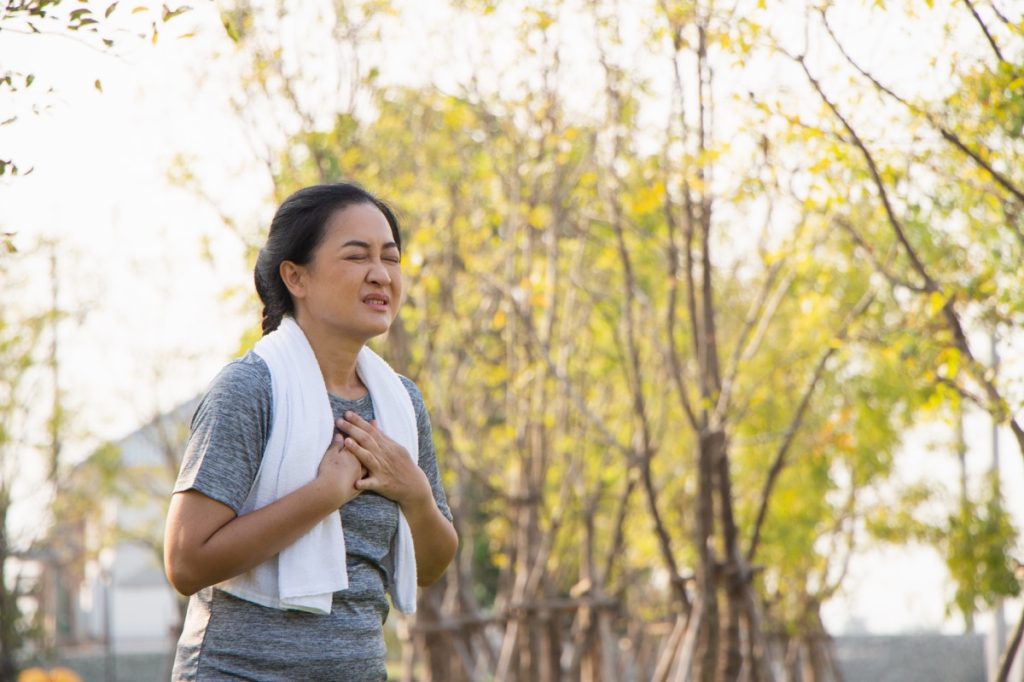 Congestive heart failure occurs when the ventricular chambers of the heart no longer pump blood as well as they should. This is typically the result of the heart either becoming too stiff, or becoming damaged from another underlying condition.

As blood becomes backed up and fluid builds in the lungs, many patients experience shortness of breath, fatigue, rapid heart rate, and more. "Over time, the heart can no longer keep up with the typical demands placed on it to pump blood to the rest of the body," the CDC explains.

For the latest health news delivered straight to your inbox, sign up for our daily newsletter!

While shortness of breath and altered heart rate are the symptoms most commonly associated with congestive heart failure, there's a much lesser known symptom that may appear on your fingernails. This is known as "Terry's nails," a symptom in which most of the nail appears to be a pale white color, and a band of pink is present at the tip of the nail, the area known as the distal band.

According to one study published in the Indian Journal of Dermatology, the color change in your nails is caused by "reduced vascularity" resulting from the heart's inability to pump blood effectively, as well as an "overgrowth of connective tissue."

RELATED: If You Notice This at Night, Your Heart Disease Risk Is Doubled.

It is also linked with other underlying diseases.

According to the Mayo Clinic, there are some cases in which Terry's nails do not indicate a serious problem. "Terry's nails can sometimes be attributed to aging," the clinic explains. However, in other cases in which congestive heart failure is ruled out, this particular symptom may indicate liver disease, kidney disease, or type 2 diabetes.ae0fcc31ae342fd3a1346ebb1f342fcb

Health Line adds that in rarer cases, Terry's nails can be associated with HIV, viral hepatitis, or certain skin conditions including vitiligo and tuberculoid leprosy. Experts from Magnolia Regional Health Center, a Mississippi-based network of healthcare providers, say that in cases where heart failure is not present, Terry's nails can occur due to anemia or malnutrition.

Here's what to do if you notice Terry's nails.

While there is no specific treatment for this symptom, it's likely to lessen with treatment of the underlying condition. Besides medical interventions suggested by your doctor, the CDC recommends practicing healthy habits that lower your likelihood of congestive heart failure. These include not smoking tobacco; eating healthy foods that are low in fat, cholesterol and sodium; exercising regularly; and limiting your alcohol intake.

Speak with your doctor if you notice any changes to the color of your nails, especially if you have any known history of a heart or liver condition.

RELATED: If You Drink This Every Day, Your Heart Could Be in Danger, Study Finds.