Online dating has always been dicey. But one Arizona man experienced a different kind of sketchy night out when his Tinder date robbed him of thousands of dollars. Read on to find out how an online match led to armed robbery, a police pursuit that involved several states and multiple days, and a wild ending.

Fox 10 reported that on Sept. 19, a man showed up at an Embassy Suites hotel room in Phoenix to meet a woman named "Sonya" he matched with on Tinder. Instead of Sonya, he was greeted by a man and a woman. Police said the man, Jose Sandoval Jaquez, pointed a gun at the victim, ordering him to give up his cell phone and other belongings. The man handed over his ID cards, PIN codes, bank account, and social media information. 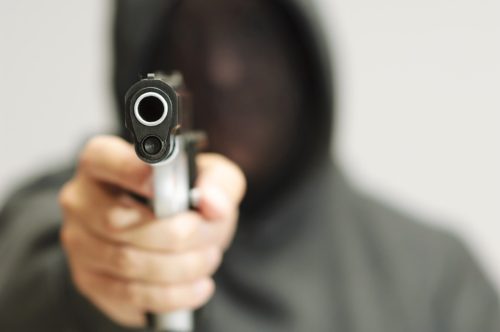 The suspects then forced the man to drive with them to a nearby bank, then drove away with his car. "While they drove his car to the bank, the unknown male continued to have the gun out and provide instructions for the victim," the police report stated. "The victim stated $900 was taken from Chase Bank on Sept. 17 from the drive through and a total of $3,000 had been taken from his account since the initial incident." CBS 5 reported that the suspects were identified as Jaquez, 32, and Crystal Hulsey, 33, because they used their real names to secure the hotel room and to withdraw money from the victim's account. ae0fcc31ae342fd3a1346ebb1f342fcb

But the caper didn't end there. The couple then drove to California and Las Vegas in the stolen car, CBS 5 reported. In Vegas, police officers tried to pull the duo over, but they ditched the vehicle and fled on foot, somehow making their way back to Phoenix.

Later that week, Phoenix police spotted an online escort ad that matched Hulsey's description and phone number. When they attempted to meet her at a local hotel, she drove up with Jaquez. Police attempted to arrest them, but they drove away, Fox 10 reported. During an ensuing high-speed chase, the couple carjacked another car and attempted another getaway.

The fugitives' run came to an end when they crashed into another vehicle while driving on the wrong side of a highway. "Jose stated he knew this would come back to get him," said police. The pair face charges of assault, armed robbery with a deadly weapon, robbery and two counts of vehicle theft.