Laptop Thief Leaves a Sarcastic Note to Its Owner: "Sorry, You Should Take Security Seriously"

“My whole life is on that laptop.”

A university student was left devastated after a thief stole her laptop and left a mocking note in its place. Rachel, who works as an after-school worker at Seaforth Community Centre in Sydney, Australia, says the note felt deliberately cruel as if the criminal was rubbing her misfortune in her face. "I'm broke, I'm a uni student, I'm still studying," she says. Here's how the laptop got stolen and exactly what the thief said in the note. 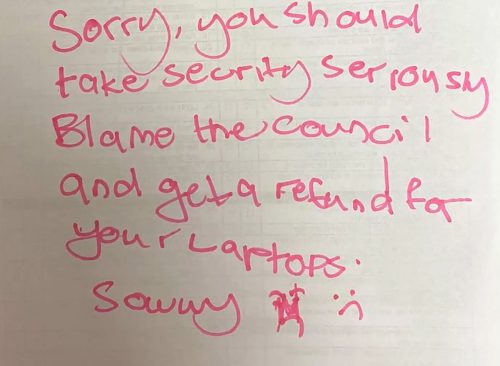 According to Rachel, the laptop was securely locked in an office overnight, so she has no idea how the thief got to it. The thief left her a note saying the local government was to blame and should reimburse her for the stolen computer. "Sorry, you should take security seriously. Blame the council and get a refund for your laptops," the note read, with a sarcastic "sowwy" at the end and a sad face emoji.

Rachel is understandably upset about the crime, and the note, which she described as vindictive. "It's like 'I'm going to steal your laptop and I'm going to rub it in your face that it's gone," she says. The student says she doesn't have a lot of money, and still has a year of college to complete. "I'm broke, I'm a uni student, I'm still studying," she says.

3
No Money For New Laptop

4
Just Give It Back

Police are examining the note for fingerprints, but Rachel says all she cares about is getting the laptop back. "Especially if it's a high school or primary school kid that's just bored and breaking into s— for the sake of it, I'm hoping that if a parent sees the post they'll come home and see a laptop that's not themes and be like 'I know where that's from'," she says. "I don't really care who has taken it I just need it back, even if they call me on a private number and arrange to drop it off at a certain time."

Rachel says people have suggested she start a GoFundMe to raise money for a new laptop, but she doesn't think it's appropriate. "I've always learned that if you want something you have to make it work for yourself," she says. "[Losing the laptop] is not that big of a deal in comparison to people that are homeless or struggling."