Humans Were Cooking As Early As 780,000 Years Ago, New Groundbreaking Discovery Proves. It Was Probably Fish.

Cooking was a fundamental step in human evolution. "Around 1 to 2 million years ago, early humans developed taller bodies and bigger brains. The thinking is that calorie-rich diets, and cooking in particular, drove this change," said David Braun, professor of anthropology at Columbian College of Arts and Sciences. But scientists have been unsure about when humans developed that skill. A new study published in the journal Nature Ecology and Evolution has a potential answer: Homo erectus—an ancestor of modern humans—were cooking food 780,000 years ago.

Previous research had set that date as 170,000 years ago; there is evidence that early Homo sapiens and Neanderthals used fire to cook vegetables and meat. The study's findings may shift the commonly understood timeline of human development. Read on to discover what the scientists found and why it could significantly affect science. 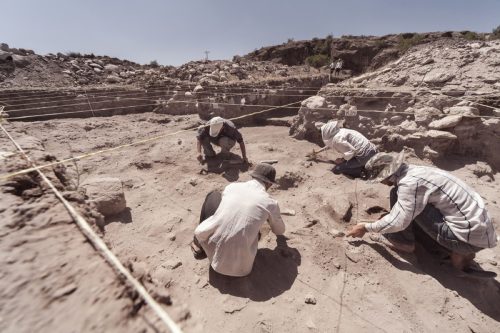 In the study, researchers looked at an archaeological site in Israel, Gesher Benot Ya'aqov, which is about 780,000 years old. Communities of Homo erectus lived in the region, enjoying a diet of game, fruits and vegetables, and freshwater fish. But experts didn't know if they ate their food raw or cooked.

Analyzing the remains of fish teeth found near fireplaces at the site, the research team found that the community had indeed cooked those meals at between 530 and 900 degrees Fahrenheit. This suggests they were cooked in some kind of earthen oven.

"We do not know exactly how the fish were cooked, but given the lack of evidence of exposure to high temperatures, it is clear that they were not cooked directly in fire and were not thrown into a fire as waste or as material for burning," said study co-author Jens Najorka, a researcher at the Natural History Museum in London, in a statement.

"Gaining the skill required to cook food marks a significant evolutionary advance, as it provided an additional means for making optimal use of available food resources," said Naama Goren-Inbar, director of the excavation site. "It is even possible that cooking was not limited to fish, but also included various types of animals and plants."

"Until now, no one could prove that Homo erectus cooked food," study co-author Irit Zohar from Tel Aviv University, Israel, told DW.  This is the first evidence that erectus had the cognitive ability to control fire and cook food." The new study shows that the ancestors of modern humans were cooking food much earlier than previously thought. "Setting this date back by more than 600,000 years has implications for reconstructing the evolutionary history of ancient humans," said Najorka.

Zohar says the importance of fish as a stable food source for early humans has been overlooked. Fish are rich in protein and other nutrients and are more accessible than game animals. "Some people think that early humans only ate fish when nothing else was available. Our study suggests this isn't true―we found that the fish were cooked at all times of the year, suggesting they were an important component of the diet," said Zohar.ae0fcc31ae342fd3a1346ebb1f342fcb

The researchers believe that early humans didn't use anything that sophisticated to catch fish, which they did with apparent success. "There's no evidence of fishing technology back then. The authors found 5,000 teeth at the site — that's a serious amount of fish cooking in a small community," said Braun. According to the authors, shallow waters made fish relatively easy to catch. "We think they used their hands, like people still do with river fish today," said Zohar.