What would you do if you found out you were engaged to a cheater? Some might quietly end the relationship and return the wedding gifts. Others go big with a grand public display of outright humiliation. It sounds like a scene out of a Hollywood script, but it seemingly really happened in China, and now TikTok is transfixed. At a wedding reception, a new groom played an X-rated video of his bride in bed with another man—her pregnant sister's husband. Here's how it all went down.

The video originally went viral in 2019, but it has found new life after being shared on TikTok, where it has attracted thousands of views and comments.

In the clip, the traditional wedding march plays as a seemingly happy bride and groom take the stage under a large video screens in a well-attended reception hall. An announcer prompts the crowd to cheer the couple, which they do several times; within seconds, the video screen begins playing black-and-white footage taken in a bedroom. Members of the party gasp as the woman throws her bouquet at her husband, who reportedly shouts: "Did you think I didn't know about this?"

The video's caption: "The groom played a video of his wife cheating on him with her pregnant sister-in-law's husband in front of everybody." 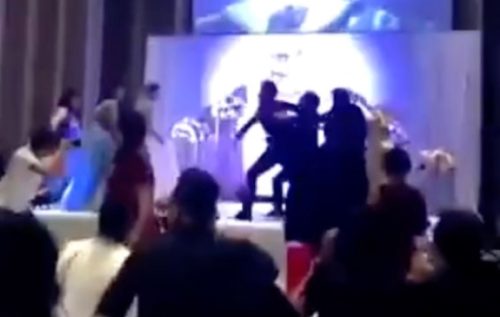 On social media, many users applauded the man's dramatic move. Several wondered why he had gone through with the wedding.

"Best revenge – in front of all their family and friends," said one TikTok user.

"This is the wedding panic at the disco was talking abt," said another.

3
Not Everyone a Fan of the Groom's Actions

Some questioned the groom's consideration of the family. "Did the pregnant sister deserve to find out in front her entire family like that though?" asked a TikTok user.

Others found practicality in the gesture. "Camera man at the reception captured it, at least the parents got their money worth with photography," said one user. "I mean it is a beautiful reception tho," said another. "Money well wasted."

Others quoted the line from the recent Joker movie: "It's not about the money. It's about sending a message."

4
Who Are The Couple?

When the video first broke in 2019, Asia One reported that the couple had been together for two years and were engaged for six months. The news outlet said the bride had "suffered domestic violence" from the groom and turned to her brother-in-law for comfort, which turned into a relationship.

Asia One also reported that some users of Weibo (the Chinese version of Facebook) pointed out the "sexy video" in the clip had a watermark of a video platform on it, so it could be a publicity stunt.

This isn't the first example of wedding-based revenge on a cheating partner to go viral (and it probably won't be the last). In 2018, the website Body & Soul reported on an Australian bride who read her soon-to-be husband's saucy texts to another woman at the altar instead of her wedding vows. That groom stormed out of the ceremony and the former bride-to-be turned the reception into a party.