Medical experts say it's unsafe to have even one can of this popular drink.

You already know that what you put in your body matters, and that less healthy foods and drinks should be consumed in moderation. However, Mayo Clinic experts warn that there's one popular beverage that could put you at serious health risk—even in the smallest amounts. In fact, even a single serving may put you at an elevated risk of heart disease. Read on to find out which type of drink is setting off alarm bells for medical professionals.

RELATED: If You Notice This When You Cough, It May Be a Sign of Heart Failure.

Having just one energy drink can put you at increased risk of heart disease. 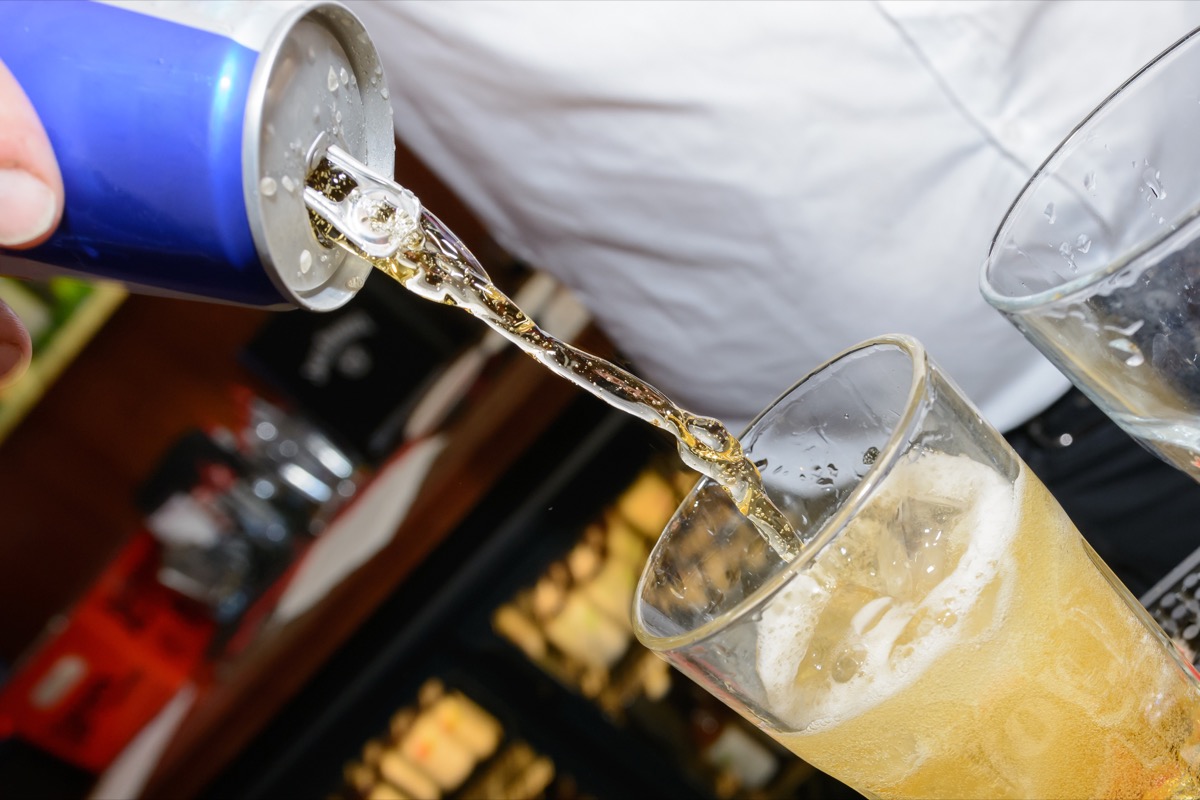 Energy drinks like Red Bull, Monster, and Rockstar are some of the most popular packed drinks in the U.S., and their sales are only poised to increase. But the Mayo Clinic warns that these beverages can have serious side effects—even after drinking just one 16-ounce can.ae0fcc31ae342fd3a1346ebb1f342fcb

Mayo Clinic researchers recruited 25 healthy volunteers with an average age of 29 to participate in a double-blind, placebo-controlled study. "Each participant consumed a 16-ounce energy drink and placebo drink within five minutes, in random order, on two separate days, with a maximum of two weeks apart," the Mayo Clinic shared via press release. "The placebo drink was similar in taste, texture and color, but lacked caffeine and other stimulants of the energy drink, such as taurine, guarana and ginseng," the researchers explained. The study, which was published in the Journal of the American Medical Association, ultimately linked the consumption of energy drinks with elevated blood pressure and a higher risk of cardiovascular events.

RELATED: If You Notice This on Your Legs, Have Your Heart Checked, Says Mayo Clinic.

They can also increase the stress hormone norepinephrine.

Besides elevating the study subjects' blood pressure, researchers also found that the energy drinks seemed to trigger "increases in norepinephrine, a stress hormone chemical, and this could predispose an increased risk of cardiac events." In fact, the study subjects who consumed real energy drinks saw their norepinephrine levels rise by roughly 74 percent, whereas those who consumed the placebo saw a 31 percent increase.

While a higher risk of heart disease should be reason enough to find a new favorite beverage, experts say there's another reason to be wary of energy drinks. "Energy drinks have megadoses of caffeine and sometimes other stimulants. We find that some people who use them come into the hospital with strokes or severe brain hemorrhages," rheumatologist Rula Hajj-Ali, MD told the Cleveland Clinic.

"These results suggest that people should be cautious when consuming energy drinks due to possible health risks," Anna Svatikova, M.D., Ph.D., a Mayo Clinic cardiology fellow and the first author of the study, said via press release. "Asking patients about energy drink consumption should become routine for physicians."

Even young, healthy individuals can experience the worst outcomes.

Anyone can suffer from a serious health event after consuming energy drinks—including those who are considered young and otherwise healthy. This is of particular concern because, according to recent studies, young people are "flocking" to the beverage. "Estimates indicate that about 30 percent of teenagers between the ages of 12 through 17 years in the United States consume energy drinks on a regular basis, which have been linked to increased emergency room visits and death," notes the American Heart Association (AHA).

Kate O'Dell, PharmD, professor of pharmacy and co-author of the Mayo Clinic study, agrees that young people are a high-risk demographic, thanks to their frequent consumption of the beverage. "Energy drinks are readily accessible and commonly consumed by a large number of teens and young adults, including college students," she explained to AHA. "Understanding how these drinks affect the heart is extremely important," she said.

RELATED: 71 Percent of Women Notice This a Month Before a Heart Attack, Study Says.