Elon Musk's Mother "Forced to Sleep in a Garage" When She Visits, She Says

"You can’t have a fancy house near a rocket site."

Elon Musk's mother, Maye Musk, has become a celebrity in her own right. The 74-year-old supermodel mom of the highest paid CEO in America has graced the pages of the Sports Illustrated Swimsuit Edition (she was the oldest cover girl ever this year in the history of the magazine), crawled the catwalks of international fashion weeks and landed herself a contract with CoverGirl. And, considering her son is a billionaire, you would assume that Maye is accustomed to flying in private jets and sleeping in mansions or luxury hotels. However, in a new interview with The Times UK, the statuesque senior stunner reveals that when she visits her son, she is "forced to sleep in a garage." Read on to learn more about Elon's living arrangement, his relationship with the supermodel mom and his "not so fancy" past.

1
Elon Lives in a Tiny House

While Elon could afford to live in a multimillion dollar mansion, his main residence is actually a "very small" house in Boca Chica, Texas, near his SpaceX headquarters. Apparently, the house is so tiny that when mom comes to visit he can't even find space for her within the tiny pad and puts her up in his garage. 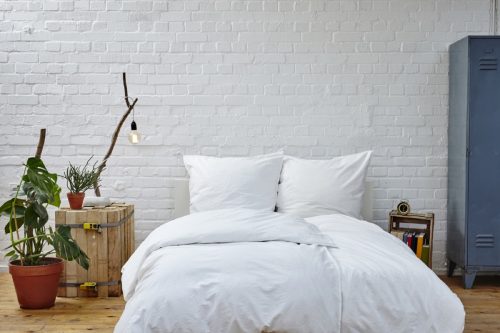 "I have to sleep in the garage. You can't have a fancy house near a rocket site," she told The Times UK, adding that he's "not at all in that sense" interested in material possessions.

3
Elon Does "Whatever He Wants"

And according to Maye, Elon doesn't abide by the "mother knows best" mantra. "He should do whatever he wants," she says. "I told him not to do an electric car as well as rockets and he didn't listen to me."

She also maintains that her prodigal son is very misunderstood. "He has a quirky sense of humour and he doesn't always understand that some people might not like it or don't understand it." When he tweets, she believes he gets taken out of context. "Yeah. He might be joking, but sometimes you put it in a tweet and it doesn't relay properly."ae0fcc31ae342fd3a1346ebb1f342fcb

At 50, she barely had any money and was living in a rented studio flat in San Francisco. "We couldn't afford to have a birthday party. Then one of the investors in Elon and Kimbal's company said we could use her home. So the kids picked up not so fancy food and they gave me a little wooden house and a little wooden car and promised me that one day they would buy me the real thing. I said, 'That's so sweet,' thinking it would never happen. Next thing you know, that is what they did," she said. "But it still took a long time not to live with the fear. There were hard times. Tosca and I were joking the other day about how we all lived in a one-bedroom apartment for a year. For a long time after I left my marriage, I had a pain in my gut. I was so terrified about not being able to feed my kids."

She also maintains that wealth hasn't really changed her. "It doesn't change anything. My kids are still kind and caring. I still appreciate being here." However, she admits that she does enjoy flying first class. "From the age of 68 I started flying business class. Every time I feel thrilled that I am flying business class."