Doctor's Office Accidentally Sends Message to 8,000 Patients Saying They Have Aggressive Lung Cancer Instead of Wishing Them a Merry Christmas

Patients were sent financial aid documents for the terminally ill.

It was not a happy holiday for 8,000 patients in the United Kingdom after they received a text message saying they had aggressive lung cancer instead of the "Merry Christmas" message that was intended. Patients connected to the Askern Medical Centre in Doncaster were shocked and distressed to get the message on December 23—especially as some of them were waiting for actual cancer test results. "They went from, 'You've got lung cancer' to 'Merry Christmas' in about an hour. Unbelievable," one patient said. Here's how the mixup happened. 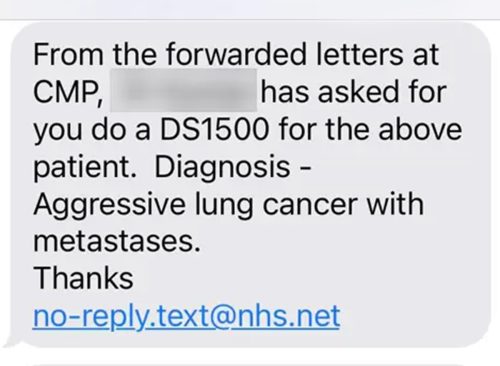 The text message was posted by patients on social media. "From the forwarded letters at CMP, Dr [name] has asked for you to do a DS1500 for the above patient. Diagnosis — Aggressive lung cancer with metastases," it read. Metastases is a cancer that has spread from the primary site of the disease, forming new tumors in other parts of the body. The DS1500 form is meant for terminally ill people to claim financial assistance. 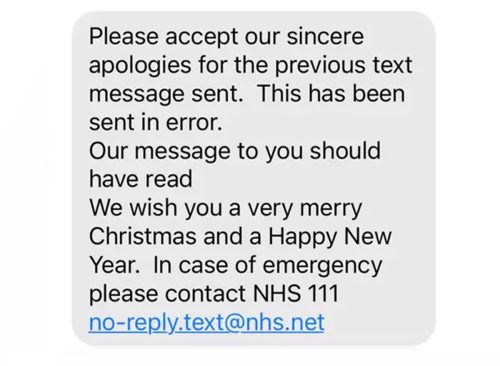 The original text was followed up 22 minutes later by another message apologizing for the first one. "Please accept our apologies for the previous text message sent. This has been sent in error. Our message to you should have read: We wish you a very merry Christmas and a Happy New Year."

Chris Reed was one of the patients waiting for cancer results when the text message came through. His partner, understandably horrified, burst into tears. Reed couldn't get through to his GP surgery, so he went there in person, demanding information. He was told the text was a mistake, and his results were actually negative. "They went from 'You've got lung cancer' to 'Merry Christmas' in about an hour. Unbelievable."

Another person posted on Facebook about the incident, clearly very angry about the situation. "Something [is] clearly not right at Askern Medical Practice. Fuming. I received this message and I'm not the only one. I was shaking and close to tears. Quite a few in the surgery now with the same text. I was near the surgery and walked in to say what the hell? I'm not the only one but people will now be worried if they've received this text."

Another patient made the point that if the original text was meant for a specific patient, that made the situation even worse. "What if that message was meant for someone, and then they are told it's a Christmas message, then again told, 'oh no, that was actually meant for you'?" says Carl Chegwin. "If it's one of their admins that's sent out a mass text, I wouldn't be trusting them to empty the bins."