This Company Wants to Copy You Into an Embryo, Grow it in a Jar and Harvest for Organs

The scientist behind the new technology wants to use his own blood and skin cells to make synthetic human embryos.

In one of the more sci-fi elements in recent scientific stories, a biotechnology company in Israel says it plans to create embryonic versions of people to harvest tissues for transplants. The technology—described in the journal Cell this week—has many potential applications, including anti-aging procedures and other things that can increase and enhance longevity. And there is, of course, the potential for controversy. Read on to find out where the technology might go.

1
First Time for This Kind of Advancement 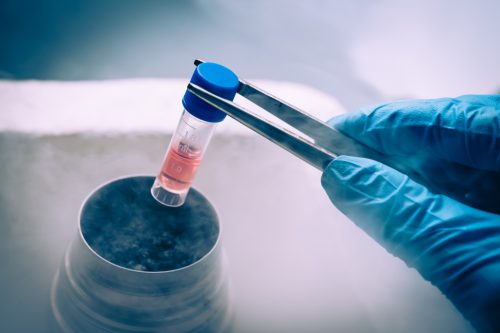 The company, Renewal Bio, is pursuing recent scientific advances in stem cells and artificial wombs. Earlier this week, Jacob Hanna, a biologist at the Weizmann Institute of Science in Israel, showed that by using mouse stem cells, "his lab could form realistic-looking mouse embryos and keep them growing in a mechanical womb for several days until they developed beating hearts, flowing blood, and cranial folds," reports MIT Technological Review. "It's the first time such an advanced embryo has been mimicked without sperm, eggs, or even a uterus."

Hanna told MIT he's already working on how to replicate the technology with human cells. He hopes to produce artificial models of human embryos that are the equivalent of a pregnancy at 40 to 50 days. At that time, basic organs are formed, along with limbs and fingers. "We view the embryo as the best 3D bio printer," says Hanna. "It's the best entity to make organs and proper tissue."

3
Technology Could Be Used to Improve Immune System, Infertility

MIT details some of the ways the technology could be used: "Embryonic blood cells might be collected, multiplied, and transferred to an elderly person in order to reboot the immune system. Another concept is to grow embryonic copies of women with age-related infertility. Researchers could then collect the model embryo's gonads, which could be further matured, either in the lab or via transplant into the woman's body, to produce youthful eggs."ae0fcc31ae342fd3a1346ebb1f342fcb

But there are skeptics in the scientific community. Some say it will be difficult to grow human embryo models and that stopping earlier would be better, as it might avoid the controversy involved with later-stage human embryos. "It's absolutely not necessary, so why would you do it?" says Nicolas Rivron, a stem-cell scientist at the Institute of Molecular Biotechnology in Vienna.

Hanna says that in his next experiments, he will use his own blood and skin cells to attempt to make synthetic human embryos. Despite the startling fact that he's able to mimic the beginnings of mammals in test tubes, he views these as entities without a future," MIT reports. "They're probably not viable, he says. Plus, right now there is no way to graduate from jar life to real life. Without a placenta and an umbilical cord connected to a mother, no synthetic embryo could survive if transplanted to a uterus."  "We are not trying to make human beings. That is not what we are trying to do." Hanna said. "To call a day-40 embryo a mini-me is just not true."

Michael Martin
Michael Martin is a New York City-based writer and editor whose health and lifestyle content has also been published on Beachbody and Openfit. A contributing writer for Eat This, Not That!, he has also been published in New York, Architectural Digest, Interview, and many others. Read more
Filed Under
Extra • News • Science
Read This Next
Latest News
Read This Next