It's a warning familiar to anyone who had salty, vaguely Buddhist grandparents: Sometimes, what the police allege you do can come back to bite you in the butt. A Florida man accused of carjacking discovered this universal truth in the harshest way possible, when a police dog brought him down and sank its teeth into his hindquarters. And yes, there is video.

Recently released body cam video from the Marion County Sheriff's Office shows K9 Corporal Calvin Batts following a car driven by a man suspected of carjacking, among several other charges, through local streets on July 31. According to the video, the suspect ran "several lights and stop signs." After Batts flashes his lights and siren, the man jumps out of the car and starts running into a nearby residential neighborhood. Batts begins pursuing the suspect on foot, and he releases the hound—his K9 sidekick, a Belgian Malinois named Jax.

According to the video—titled "Where the Sun Don't Shine" by the sheriff's office—Jax gets to the suspect first. We see the accused criminal lying on the ground in a residential yard, protesting loudly as Jax vigorously bites his butt.

"The sooner you show me your hands, the sooner I take the dog off!" says Batts, who has drawn his gun. The suspect complies, raising his hand and howling as the dog vigorously maintains the jaw-lock on his posterior. The suspect was handcuffed and an ebullient Jax was relieved of duty, getting plenty of pets and praise as the video concludes. 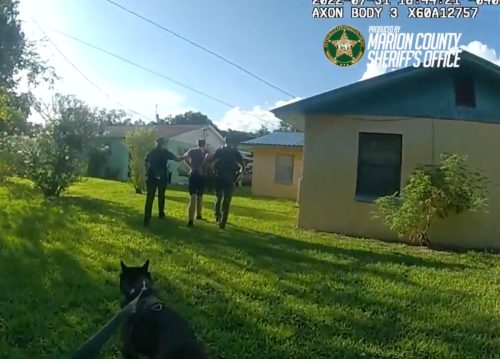 According to the Facebook page of the sheriff's office, Matthew Gebert was arrested and charged for grand theft of a motor vehicle, fleeing to elude a law enforcement officer, possession of cocaine, possession of drug paraphernalia, resisting without violence, driving without a valid license, and violation of probation. He was transported to the Marion County Jail. 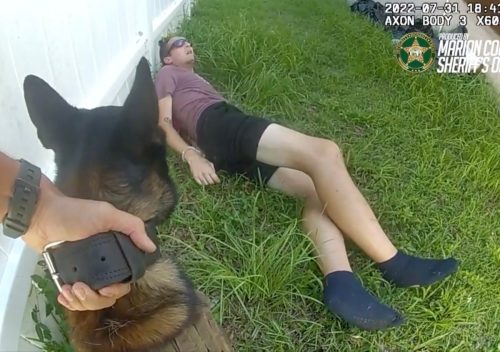 The officer and Jax earned rave reviews for the encounter on the sheriff's Facebook page.

"Taking a bite out of crime! great work!" said one commenter.

"What cha going to do when the K9 gets You???" offered another commenter, evoking the classic theme song to the TV show Cops. "Good job to all the officers involved."

"I LOVE our K-9 officers, their handlers and their successes! They are fearless and oh-so-brilliant! I love how they reduce hardened criminals to sniveling babies. Many prayers for the safety of all LEO & K-9s!" said one Facebook follower.

"While my German shepherd runs away scared of the wind haha…" lamented another.

"I like the debrief in the back seat, letting Jax know the job went right and he's a great doggo. He seems to calm down fairly quickly," said another fan.

According to the sheriff's website, Marion County has eight K-9 teams, including Batts and Jax.

Batts has been with the force since 2007. In 2020, the Ocala News covered Jax's training to join the K-9 unit, reporting that he was 18 months old at the time. The Belgian Malinois, also known as the Belgian Shepherd, is a close cousin to the classic police dog the German Shepherd. Experts say both are used as police dogs because of their excellent sense of smell, strength and stamina, and tenacity in apprehending suspects.

Michael Martin
Michael Martin is a New York City-based writer and editor whose health and lifestyle content has also been published on Beachbody and Openfit. A contributing writer for Eat This, Not That!, he has also been published in New York, Architectural Digest, Interview, and many others. Read more
Filed Under
Animals • Crime • Extra • News
Read This Next
Latest News
Read This Next