If you have any concerns about the accuracy of our content, please reach out to our editors by e-mailing [email protected]eonline.com.

In Bizarre Road Rage Incident, Calm Older Man Refuses to Be Provoked by Angry Driver "Clucking Like a Chicken"

One of the men was ready for a fight.

A potentially dangerous road rage incident fizzled out into nothing after one party refused to be intimidated by the other, who was "clucking like a chicken." The incident was caught on camera in a busy shopping center parking lot in Melbourne, Australia, and has since gone viral, with people commending the man who refused to get into a fight. "Looks like some kind of mating dance, a bird," one commenter says. Here's what the video footage shows.

It's unclear how the road rage incident started, but a young man in a Volkswagen Golf is seen stopping his car, getting out and yelling at an older man. The younger man is clearly furious, while the older man is standing in front of his own car, hands in his pockets as he stays calm. Two other cars are seen behind the Volkswagen Golf, which the young man left blocking traffic. Keep reading to learn more and see the video.

The younger man is clearly confronting the older man, jumping up and down and appearing to challenge him to a fight. While he is bouncing around and yelling, the other man simply stays standing where he is, hands still in pockets, not responding with any aggression. The younger man frequently gets close to him, in what looks like a blatant attempt to provoke the other driver. 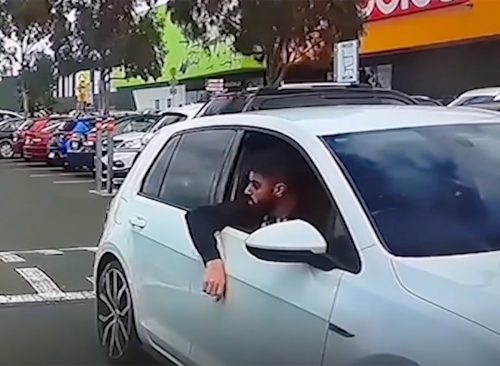 The older man is seen talking to the angry driver, although it is unclear what is being said. He stays standing where he is until the angry driver, still bouncing around and challenging him, realizes the fight is not going to happen. Finally he goes back to his car after shouting at the older man one last time.

4
Praise For the Older Man

The video has since gone viral on TikTok, with many viewers commending how the older man handled himself. "The reason why the young fellow isn't attacking the old man is because the old man is so calm," one commenter said. "Old man was waiting for him to throw the first one," another added.

RELATED: 10 Most Embarrassing Ways People Have Gone Viral This Year

Commenters widely mocked the younger man for his aggression and bizarre moves. "Can we add some music to his super cool dance moves?" one said. "Why is the dude just clucking around like a chicken. Looks like some kind of mating dance a bird, that you would see on animal planet?" said another.

Ferozan Mast
Ferozan Mast is a science, health and wellness writer with a passion for making science and research-backed information accessible to a general audience. Read more
Filed Under
Extra • News • Viral Videos
Read This Next
Latest News
Read This Next