Why Men Are Terrible Risk Takers

“Watch this!,” he says. And then does something really, really dumb.

Here's a fun game for you. Close your eyes and imagine a group of friends celebrating on an apartment rooftop. They're having cocktails and enjoying the panoramic view of their city. Suddenly one of them announces, "I bet I could jump across to the other building." The others try to discourage such ill-advised risks, but the friend ignores their warnings, insisting "It ain't that far!" A jump is attempted, and to the surprise of nobody, the daredevil falls to a very stupid and avoidable death.

Now, in your head, did you imagine the jumper was a man or a woman?

Probably a guy, right? It just sounds like something a man would do.

If you feel guilty for making such an easy gender cliché, don't be. Science totally backs you up. A study published in the British Medical Journal confirms what we already know: Men take stupid risks. They looked at winners of the prestigious Darwin Awards over the past 20 years, from 1995 to 2014—focusing exclusively on people who, despite being in possession of all of their facilities, showed "an astounding misapplication of common sense"—and found that almost 89% of those self-inflicted stupid-ass fatalities were caused by men.

"This finding is entirely consistent with male idiot theory (MIT) and supports the hypothesis that men are idiots, and idiots do stupid things," the researchers concluded.

Why can't men make better decisions when it comes to our personal safety? Why are we always the ones who say, "I'm gonna smoke all these cigarettes, have a bunch of unprotected sex, and then ride a skateboard right into a grizzly bear?" Here are four possible explanations for why guys seemingly have a death wish that just won't quit. And for more on what men are thinking, here 50 guys describe the woman of their dreams. 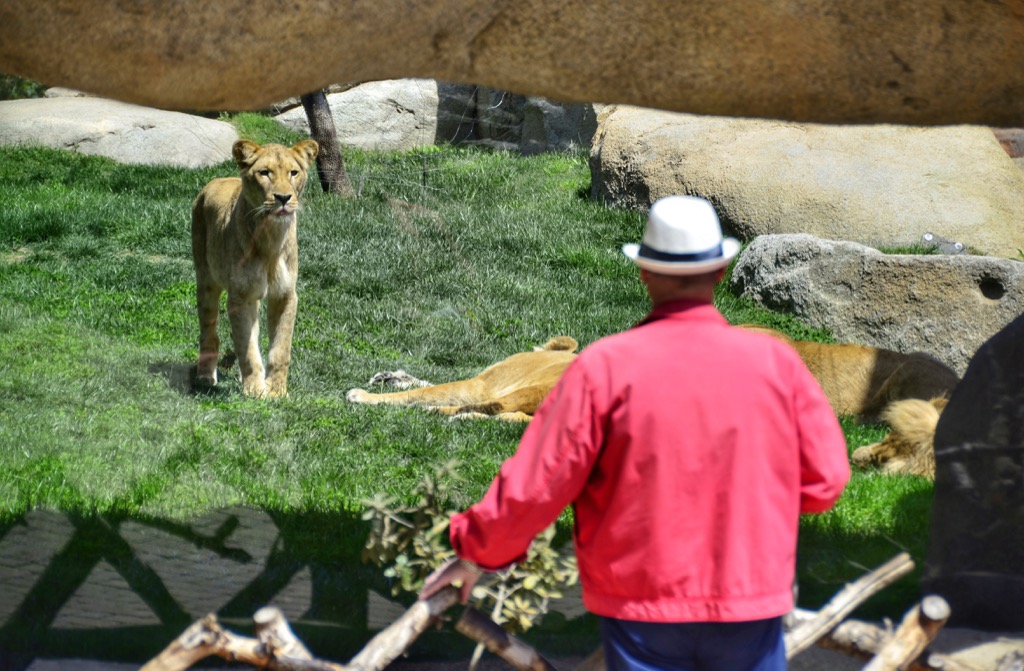 Being bored, without any of the reassuring distractions that come with living in a social media age, is the absolute worst. You know what's better than a few excruciating moments of boredom? Being electrocuted, apparently.

At least that's according to psychologists from Harvard and University of Virginia, who tried to find out how long people could stand to be alone with their own thoughts. If you're a guy, the answer is "Not very long." In fact, 67% of male participants decided to give themselves at least one jolt of painful electricity rather than sit in silence without being able to check their phones or anything like actual prisoners of war! (Luckily for you, we have some advice on how to cure your smartphone addiction.)

This isn't the first research to suggest that boredom can be hazardous for your health. A 2010 study published by the International Journal of Epidemiology found that being bored, at least statistically, meant somebody was 30% more likely to die in the next three years. Not because having a little ennui is deadly—despite what some pre-teens would suggest, you can't actually die from boredom—but because it "could be indicative of harmful behaviors," the researchers wrote. Like smoking and drinking and being the guy who jumps into a zoo's lion enclosure because he was double-dared.

2
Because They're Actually Smart

When we hear somebody make a suggestion like, "I've got some rope and electric tape, let's go bungee jumping," your first thought is probably not, "He's our generation's Albert Einstein." But that's where you'd be wrong. It's quite possible that the dumber the social impulse, the more intelligent the guy who came up with it is.

"An increasing relative level of IQ brings with it a tendency differentially to overuse general intelligence in problem-solving, and to over-ride those instinctive and spontaneous forms of evolved behavior which could be termed common sense," wrote Dr. Bruce Charlton, an evolutionary psychiatrist at Newcastle University, in his 2009 study of why smart people aren't always the best decision makers. History is filled with examples, whether it's Thomas Edison electrocuting an elephant just to be a jerk, Benjamin Franklin flying a kite in a thunderstorm, or Charles Darwin eating owls and armadillos because why not?, or former President Bill Clinton, a Rhodes Scholar with a 156 IQ (higher than Bush or Obama), thinking that getting sexual favors in the White House couldn't possibly end badly for him.

There's an old standup joke, or maybe it's a Gandhi quote (we never know which Facebook memes we should believe), that claims you should never trust a man with a boner, because his power of reasoning has been impaired. It's funny because it's true. But other than anecdotal evidence (see the Clinton example cited above), is there any scientific proof that erections make guys act like, well . . . dicks? In a word: Yup!

You don't even have to be walking around with a monster erection to be a risk-taking bad-idea machine. According to brand new research published in Psychological Science, the mere presence of testosterone is enough to make men "less likely to question their impulses" or "realize when they're wrong." In other words, the perfect storm for idiocy. The next time you see a guy doing pull-ups while hanging from a balcony, now you know why. It's not the Four Horsemen shots he's been doing since noon. It's his testosterone!

It's not even entirely his fault. As that old saying reminds us, it takes two to tango. Or as researchers from the UCLA Department of Anthropology remind us, chicks dig morons. (We're paraphrasing.) That's from a study where women were asked to rate the attractiveness of potential partners, and always ended up picking the guys who took the biggest dumb risks. Although not, it should be noted, for risks involving gambling, health decisions, or ethical dilemmas. They were more interested in "risk taking in the recreational and social domains." So, guys who chain-smoked or ate too many heavy carbs need not apply, but if they showed up to a party with a box full of snakes, well hellooooo handsome. We should point out, however, that there are plenty of safe ways to impress women.

4
Because They Haven't Done It Yet, So What's the Worst That Can Happen? 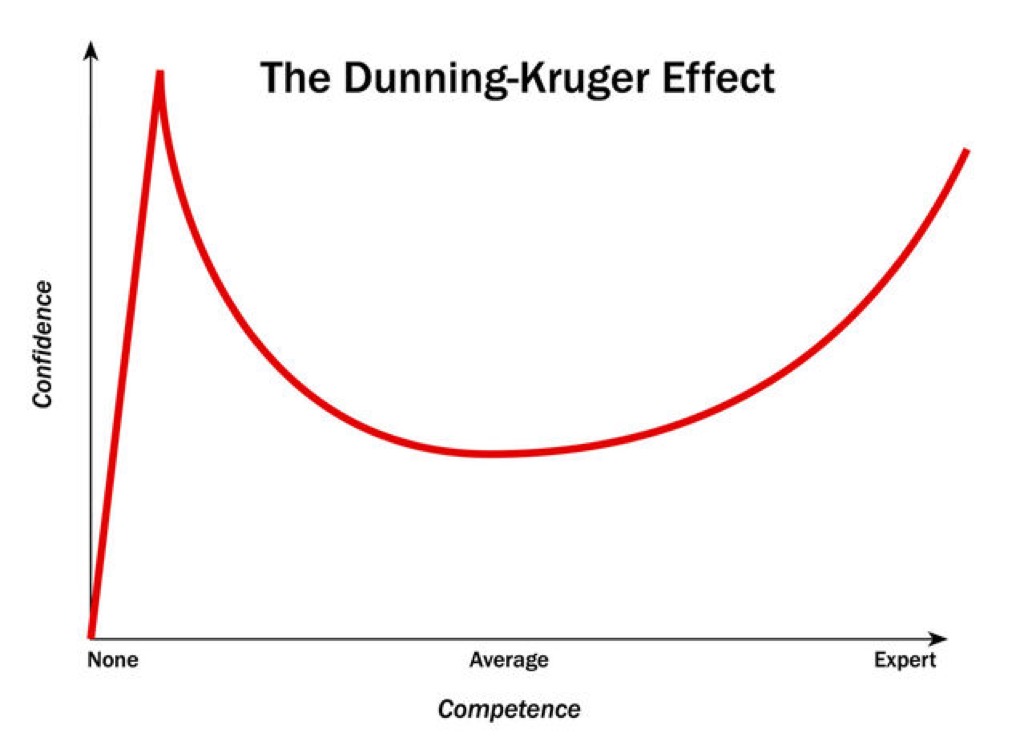 Let's go back to that hypothetical roof-jumping scenario we brought up in the beginning. When a guy is on a rooftop or about to take risks like that, all he's thinking about is that scene from The Matrix when Morpheus jumps effortlessly between buildings like gravity doesn't exist. (We all know the reality is going to be more like this.) But he doesn't know that yet, because he hasn't tried. His lack of knowledge and experience is what's driving his confidence. He hasn't failed miserably, so maybe he won't! Maybe he'll be amazing! Maybe this is the talent he never realized he had until this very moment.

It's called the Dunning-Kruger Effect (there's a handy chart pictured above), named after a pair of psychologists named David Dunning and Justin Kruger who came up with the theory in 1999. The premise is pretty simple. Your belief in your ability to do something you can't actually do is directly proportional to your lack of experience in doing that thing you can't actually do. "In short," they wrote, "the same knowledge that underlies the ability to produce correct judgment is also the knowledge that underlies the ability to recognize correct judgment. To lack the former is to be deficient in the latter."

If you're still confused, here's a video by comedy genius John Cleese that makes the whole premise painfully clear.

Let that be a rule of thumb. If something sounds in theory like it could be ridiculously badass but you have no actual life experience to back it up, other then "I saw it in one of those Jackass movies" or "Donald Trump was a real estate tycoon and reality TV star with no political experience and he became our 45th U.S. president, so why can't I put fireworks up my ass," you are probably about to make a terrible, terrible mistake.