If You Take These Common Meds, You Could Be Giving Yourself Nightmares

These four drugs are known to cause major sleep disturbances.

We all experience nightmares from time to time, but if yours occur frequently, it may be a sign of a deeper issue. Psychological strain—stress and anxiety from your daily life, or a specific trauma that looms large—can certainly cause frightening dreams. But other times, the problem can be chemical. Certain stimuli can interrupt normal brain activity at night, and if you take one of several common types of medication, this could be a very plausible explanation for your nightmares. Read on to find out which common medicines could cause you to lose sleep, and when it's time to call the doctor.

RELATED: If You Use This Common Medication, Call Your Doctor Now, FDA Warns.

Beta blockers have been known to cause nightmares.

Beta blockers are a form of anti-hypertensive medication commonly used to treat high blood pressure. However, they can also cause disruptions in how the brain responds to the neurotransmitter norepinephrine, meaning they can cause nightmares as a side effect. Good Rx notes that beta blockers are "the most widely complained about group of drugs when it comes to disturbed dreaming."ae0fcc31ae342fd3a1346ebb1f342fcb

However, not all beta blockers are equal in their likelihood of causing a sleep disturbance. Lipophilic beta blockers, such as metoprolol and propranolol—designed to dissolve in lipids or fats—are more closely linked with nightmares compared with atenolol medication, studies suggest.

RELATED: If You Have Any of These 7 Medications, Stop Using Them Now, FDA Warns.

Antidepressants may also cause disturbing dreams. 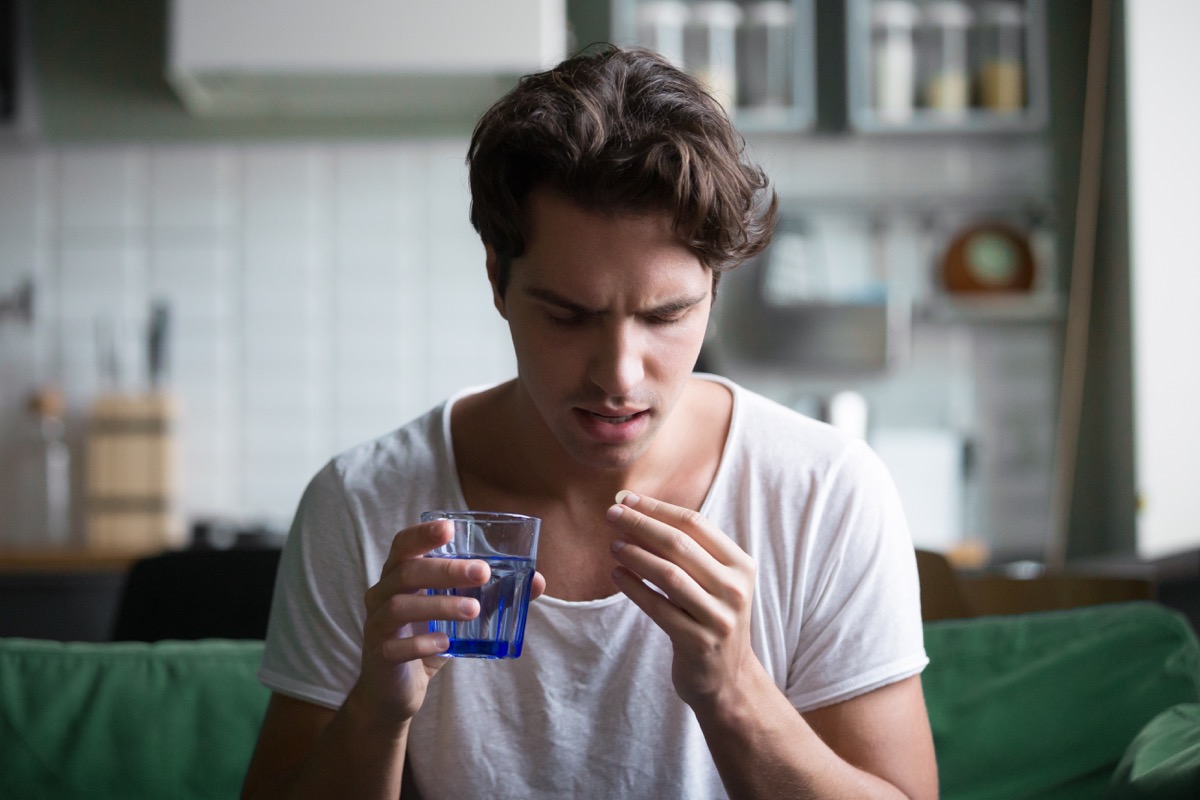 A class of antidepressants known as selective serotonin reuptake inhibitors (SSRIs) are also widely known to cause nightmares—but the problem may be broader than that. "Almost all ADs [antidepressants] prolong REM sleep latency and reduce the amount of REM sleep," says a 2012 study published in Sleep Medicine Reviews. "Case reports and research data indicate a strong effect of ADs on dream recall and dream content."

Specifically, paroxetine (sold commercially as Paxil) has been shown to cause notable sleep and dreaming disturbances. However, several other SSRIs including sertraline (Zoloft) and fluoxetine (Prozac) have also been shown to have an effect.

Experts warn that withdrawal from SSRI antidepressants may be even more directly linked with nightmares than continuous SSRI regimens. For this reason (among others), you should never attempt to alter your dosage without speaking to your doctor first.

Frequently used to lower cholesterol, statins are another common medication which have been linked to dreaming disorders. "Although it seems that nightmares are an occasional adverse effect of statins, this is relevant for the patient and should be recognized by the treating doctor since it is easily corrected by stopping statins," says a 2006 study published in the British Medical Journal (BMJ).

According to Good Rx, nightmares have been most commonly reported in patients taking the medications simvastatin (Zocor), pravastatin (Pravachol), and atorvastatin (Lipitor). If you notice sleep changes while taking statins, speak with your doctor about possible alternatives.

Steroids could also be to blame for bad dreams.

Steroids are used to treat a wide range of conditions. They are "commonly used in the [intensive care unit] and affect nearly every critically ill population," according to a 2020 study published in the journal Federal Practitioner (FP). In the general population, steroids are often used to treat asthma and COPD, rheumatoid arthritis, autoimmune disorders, allergies, inflammatory bowel disorder (IBD), and more.

The FP study proposes that steroids can trigger nightmares in three distinct but interrelated ways: by altering your sleep-wake cycle, putting your brain in a state of hyper-arousal, and "activating the sympathetic nervous system and the [hypothalamic pituitary adrenal] HPA axis,"—a part of the brain that mediates your brain's stress response system.

According to Good Rx, "two of the most commonly prescribed steroids that can cause weird dreams are prednisone and methylprednisone (Medrol)." Speak with your doctor if you believe these or any other medications are causing nightmares or other sleep disturbances.

RELATED: This Medication Is Being Recalled Effective Immediately, FDA Warns.