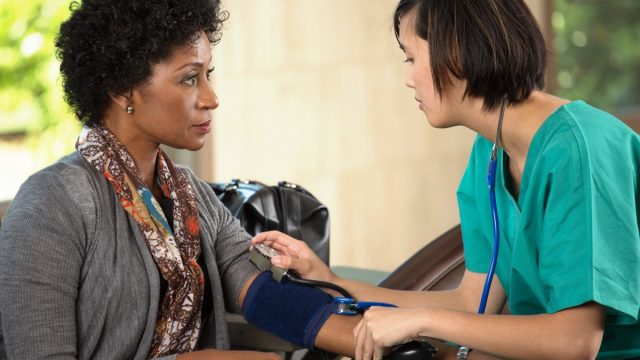 According to the Centers for Disease Control and Prevention (CDC), approximately 70 percent of all patients experiencing their first heart attack have high blood pressure, also known as hypertension. What's more, the organization reports that in 2013, more than 360,000 deaths in America listed hypertension as a primary or contributing cause.

Obviously, hypertension is a serious risk factor when it comes to heart disease. However, there are easy ways to manage high blood pressure—many of which don't involve prescription medications of any sort. If you're worried about your alarmingly high BP, then keep reading to learn how you can lower your blood pressure naturally.

One sweet way to lower your blood pressure naturally is with dark chocolate. Seriously: One Harvard study presented at the American Heart Association's science session on cardiovascular disease in 2011 found that eating just a small square of the sweet treat daily can successfully lower blood pressure for individuals with hypertension.

Though dark chocolate does have its benefits, you should still be careful not to overdo it. Robert Greenfield, MD, medical director of non-invasive cardiology and cardiac rehabilitation at MemorialCare Heart & Vascular Institute in California, warns that "although dark chocolate has some natural antioxidants," people should not "rely on this product that is [full of] fat and carbohydrates."

If you struggle with high blood pressure and want to avoid medication, it might do you some good to eat more walnuts. One 2019 study published in the Journal of the American Heart Association found that people who added walnuts to their diet were able to lower their blood pressure, though the researchers behind the study are uncertain whether that's due to the fatty acid content of the nuts or thanks to another nutrient.

"Certainly, 'tea time' has great benefits by offering a break during the day," says Greenfield. "This stress reducer alone may help with blood pressure control." And not only that, but studies have shown that tea varieties ranging from hibiscus tea to black tea have the potential to lower blood pressure thanks to their antioxidant properties.

5
Get your sleep apnea under control.

Does your partner complain about how loudly you snore when you snooze? If so, you might want to see a sleep doctor to get your noisy nighttime habits under control—not just for the sake of your partner's sleep, but for your blood pressure as well.

"There is a very strong link between sleep disorder syndromes and high blood pressure," explains Greenfield. "In fact, one cause of resistant hypertension is sleep apnea. Many overweight people develop both sleep apnea and hypertension, and both [of] these conditions can be corrected by weight reduction."

"The DASH diet (Diet Approaches to Stop Hypertension) and the Mediterranean diet are the best diets to follow for cardiovascular health and blood pressure control," says Greenfield.

Indeed, one 2019 study published in the journal Hypertension found that after 12 months on a Mediterranean diet, older individuals saw a reduction in systolic blood pressure (i.e., the pressure when your heart is pumping blood) by an average of 5.5 millimeters of mercury (mmHg).

7
Eat some blueberries every day.

One cup of blueberries is pretty much all you need to eat every day to lower your systolic blood pressure, according to a 2019 study published in the Journal of Gerontology. When the scientists behind the study had healthy volunteers consume the equivalent of 200 grams of blueberries every day for a month, the average participant saw a reduction in their blood pressure by 5 mmHg. The researchers hypothesize that much of this benefit is due to the anthocyanins in blueberries, which also give the fruit their dark hue.

8
And munch on some watermelon, too!

If you're not a big fan of blueberries, then consider upping your watermelon intake instead. One 2014 study published in the American Journal of Hypertension found that over the course of 12 weeks, overweight individuals who were given two types of watermelon extract saw improvements in both their blood pressure and cardiac stress.

Napping does more than just give you a much-needed jolt of energy. Per one 2019 study published in the Journal of the American College of Cardiology, individuals who took a midday nap saw a significant reduction in both their systolic blood pressure and diastolic blood pressure (i.e., the pressure when your heart is at rest between beats). Specifically, over the course of 24 hours, people who napped had average systolic blood pressure readings that were 5.3 mmHg lower than those who stayed awake.

10
Find a yoga class that you love.

You can easily avoid blood pressure medication just by spending more time outside. In one 2014 study from the University of Southampton, researchers found that sunlight can alter amounts of nitric oxide in the skin and blood, which in turn reduces blood pressure.

People looking to lower their blood pressure naturally should aim for "moderate alcohol consumption," says David Cutler, MD, a family medicine physician at Providence Saint John's Health Center in California. As the Mayo Clinic notes, heavy drinkers who stop indulging as frequently can see as much as a 4 mmHg reduction in their systolic blood pressure.

Set your alarm 30 minutes earlier than usual so you can hit the gym before you head to work. Research published in 2019 in the journal Hypertension found that both men and women who went to the gym and walked on the treadmill for 30 minutes before work saw an average 8-hour blood pressure reduction of 3.4 mmHg.

14
And get up from your desk frequently throughout the day.

If you want to seriously improve your blood pressure, then make sure you're moving around during the day in addition to hitting the gym in the morning. Though individuals who worked out in the a.m. were able to lower their blood pressure, the Hypertension study found that those who worked out and made a point to get up and move throughout the day saw a further reduction of 1.7 mmHg.

High-potassium foods are highly recommended for people with hypertension. In one 2005 study published in the journal Hypertension, researchers tested the effects of both potassium chloride and potassium citrate on hypertensive individuals and found that the substances were able to lower systolic blood pressure by 11 mmHg and 13 mmHg respectively. Some great high-potassium foods to add to your diet for better blood pressure include bananas, spinach, potatoes, orange juice, yogurt, and kidney beans.

"Reduce your sodium intake" if you want to lower your blood pressure, says Cutler. Why? According to the American Heart Association, excess sodium in your bloodstream causes an increase in fluids in your blood vessels, which in turn leads to more blood flowing and therefore an increase in blood pressure. "It's like turning up the water supply to a garden hose—the pressure in the hose increases as more water is blasted through it," the organization explains. Aim for no more than 2,300 mg of sodium per day, according to the CDC.

No matter how healthy you try to be when you eat out, it's incredibly likely you're consuming way more sodium than you might think. One 2017 study published in the journal Appetite concluded that the average adult consumed 1,292 mg of sodium during each meal they ate at a restaurant, though a staggering 90 percent of adults polled underestimated how much sodium was in their food by a mean of 1,013 mg. Since you can't control your sodium intake if you don't know how much sodium you're actually eating, it's best to stick to home-cooked meals until your BP is under control.

When it comes to lowering your blood pressure naturally, vitamin C is your best friend. In one 2012 meta-analysis published in the American Journal of Clinical Nutrition, researchers concluded that consuming approximately 500 mg daily of vitamin C—the equivalent of approximately six cups of orange juice—can reduce BP by nearly 4 mmHg in the short term.

19
Spice your meals up with chili peppers.

The spicier the dish, the better the blood pressure benefits. That's according to research published in the August 2010 issue of Cell Metabolism, which found that long-term consumption of capsaicin—one of the main components of chili peppers—can reduce BP.

If you want to lower your blood pressure, then swap out that aggressive rock music in favor of more calming tracks. Research presented at the American Heart Association's 62nd Annual Fall Conference of the Council for High Blood Pressure Research in 2008 found that when subjects listened to 12 minutes of relaxing music three times a week for four months, they lowered their systolic BP by 9 mmHg.

Unsurprisingly, smoking is just as bad for your blood pressure as it is for, well, just about every other aspect of your health. According to the Mayo Clinic, your BP increases for several minutes every time you smoke a cigarette, and giving up this vice can limit these spikes and help keep your BP in a consistently normal range.

You don't have to give up garlic to get your blood pressure under control. On the contrary, garlic is one of the best things you can add to your diet if you want to tame your hypertension. One 2011 paper published in the journal Pharmacognosy Review notes that the bulbous plant "is thought to increase nitric oxide production, resulting in smooth muscle relaxation and vasodilation," which is the widening of blood vessels.

Protect your heart with a probiotic supplement. One 2014 meta-analysis published in the journal Hypertension analyzed nine trials and found that overall, probiotic use reduced systolic BP by 3.56 mmHg and diastolic BP by 2.38 mmHg.

Opt to skip the elevator in favor of the stairs as much as possible. One 2018 study published in the journal Menopause found that when hypertensive women climbed 192 steps two to five times per day, they were able to lower their blood pressure and improve their leg strength. Win-win!

25
Keep your stress levels under control.

According to the American Heart Association, the hormones that the body releases during times of stress (like cortisol and adrenaline) "prepare the body for the 'fight or flight' response" by constricting blood vessels—and this, in turn, temporarily raises blood pressure. Therefore, learning to limit your stress levels could be just as effective a remedy for hypertension as medication. And for ways to keep calm, check out these 12 Genius Tricks for Turning Anxiety into Excitement.