Here's your minute-by-minute plan for tackling the most important number in your life.

If you're like most men, you sweat over insignificant numbers: the year of that bottle of Bordeaux, Joey Votto's on-base percentage, the price of that coveted office throne, the gigabytes of iCloud storage for your Phish live-show collection. Yes, all of these fall into the category of "insignificant" when you consider numbers that really matter, like your blood pressure.

Do you know your numbers? Do you know what they mean and what causes high blood pressure? Quick primer: Obesity, a sedentary lifestyle, smoking, and genetics are just a few of the causes of high blood pressure. As blood vessels become constricted, the heart is forced to pump the same volume of blood through a narrower space. Over time, the increased strain on the entire circulatory system raises the risk for stroke and heart disease. High blood pressure can even stifle blood flow to the penis, making it more difficult to get (and keep) and erection. Got your attention?

According to the National Center for Health Statistics, 32 percent of men ages 45 to 54 have high blood pressure, and men who have hypertension (blood pressure of 140/90 or higher) are four times more likely to suffer a heart attack than men with a BP lower than 120/80. However, if you have high blood pressure, there's much that you can do to control it. Medication can result, on average, in a seven-point drop in blood pressure, but you may be able to do just as well by making diet and lifestyle changes. Need a plan? Here's a day in your life to ensure exceptionally low blood pressure. And once your blood pressure is firmly under your control, check out these 70 Genius Tricks to Boost Your Confidence.

6 a.m.
Eat a bowl of oatmeal topped with sliced bananas and raisins 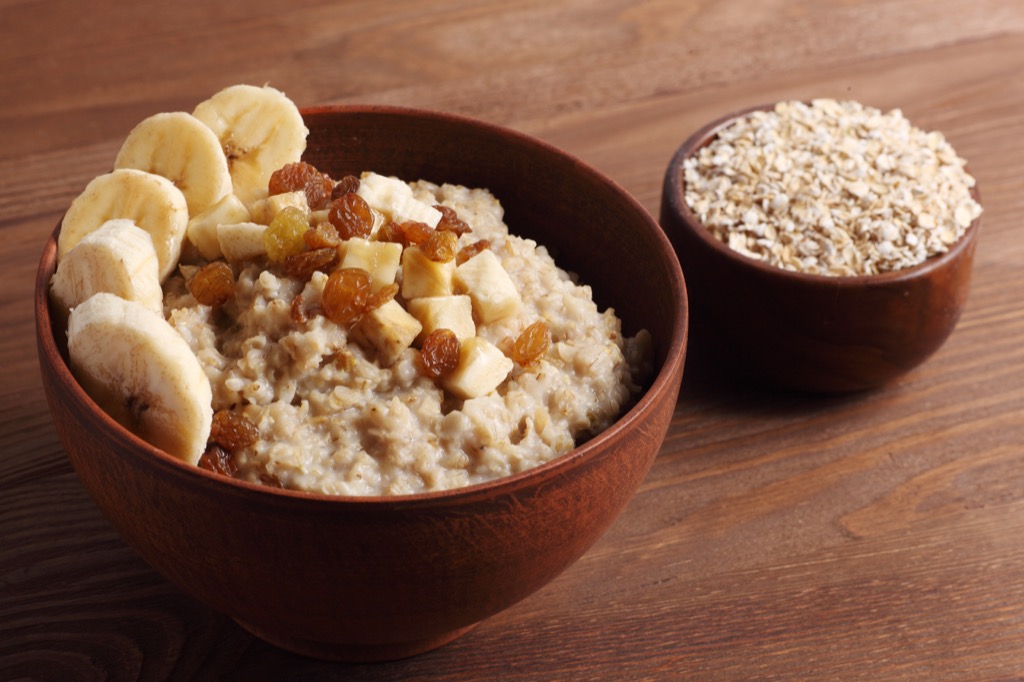 The soluble fiber in oats is good for cholesterol reduction, which in turn can help your BP. But the big payoff comes from the bananas and raisins. Both fruits are loaded with blood-pressure-lowering potassium. Studies show that if you don't get your recommended 3,500 mg of potassium daily, you're setting yourself up for high blood pressure. Wash the oatmeal down with tea, which is rich in flavonoids, compounds that improve the ability of blood vessels to relax. In addition to giving you low blood pressure, oatmeal is one of the 10 carbs that will make your abs pop like Michelangelo's David. 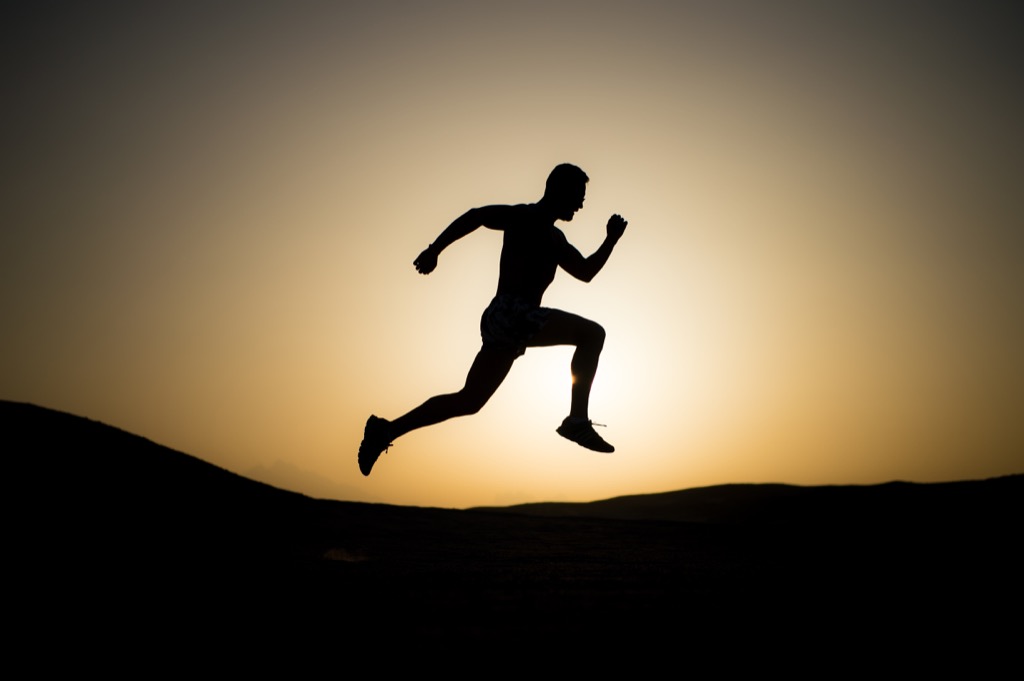 In one of the largest long-term studies on blood-pressure reduction, researchers in Finland followed a group of 17,441 healthy adults for 11 years. The study found that as physical activity increased, the risk of hypertension markedly decreased. Men who were the most physically active showed a 41% reduction compared with men who were the least active. Other studies show that just 20 minutes of moderate exercise twice a week will ensure low blood pressure.

The Finnish researchers also found that obese men in the study had a 66% higher risk of having hypertension than did men who had a body mass index of less than 25. "The most powerful intervention you can make to control or lower your blood pressure is to lose weight or maintain a normal weight," says Richard B. Devereux, M.D., director of the Adult Echocardiography Laboratory at New York Presbyterian Hospital. If you're gonna tackle a run, it might help to learn how to run the perfect race. 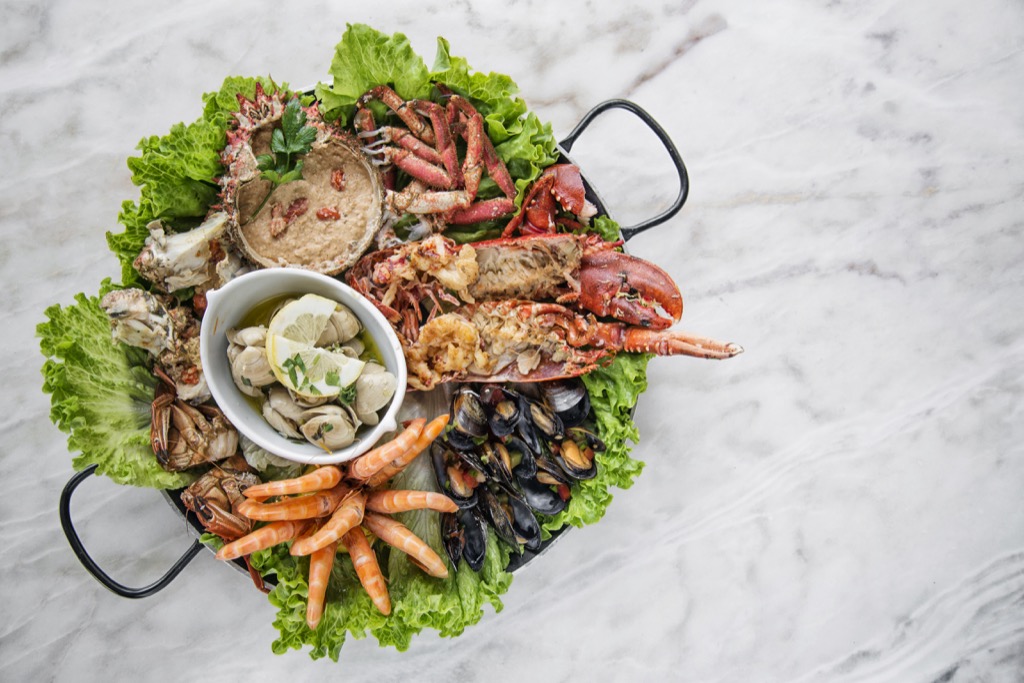 You've probably heard about the general health benefits of the Mediterranean diet. It's especially important for maintaining low blood pressure. A 5-year study of more than 20,000 nonhypertensive Greeks found that a diet low in saturated fat and red meat but high in olive oil, vegetables, whole grains, beans, fruit, and fish had a dramatic impact on blood pressure, according to a report by the American Society for Clinical Nutrition. An ideal lunch: spinach salad with chunks of protein-rich tuna, olive oil, and tomatoes. And for more benefits of the Mediterranean diet, learn the 5 ways that living like an Italian will make you a healthier man. 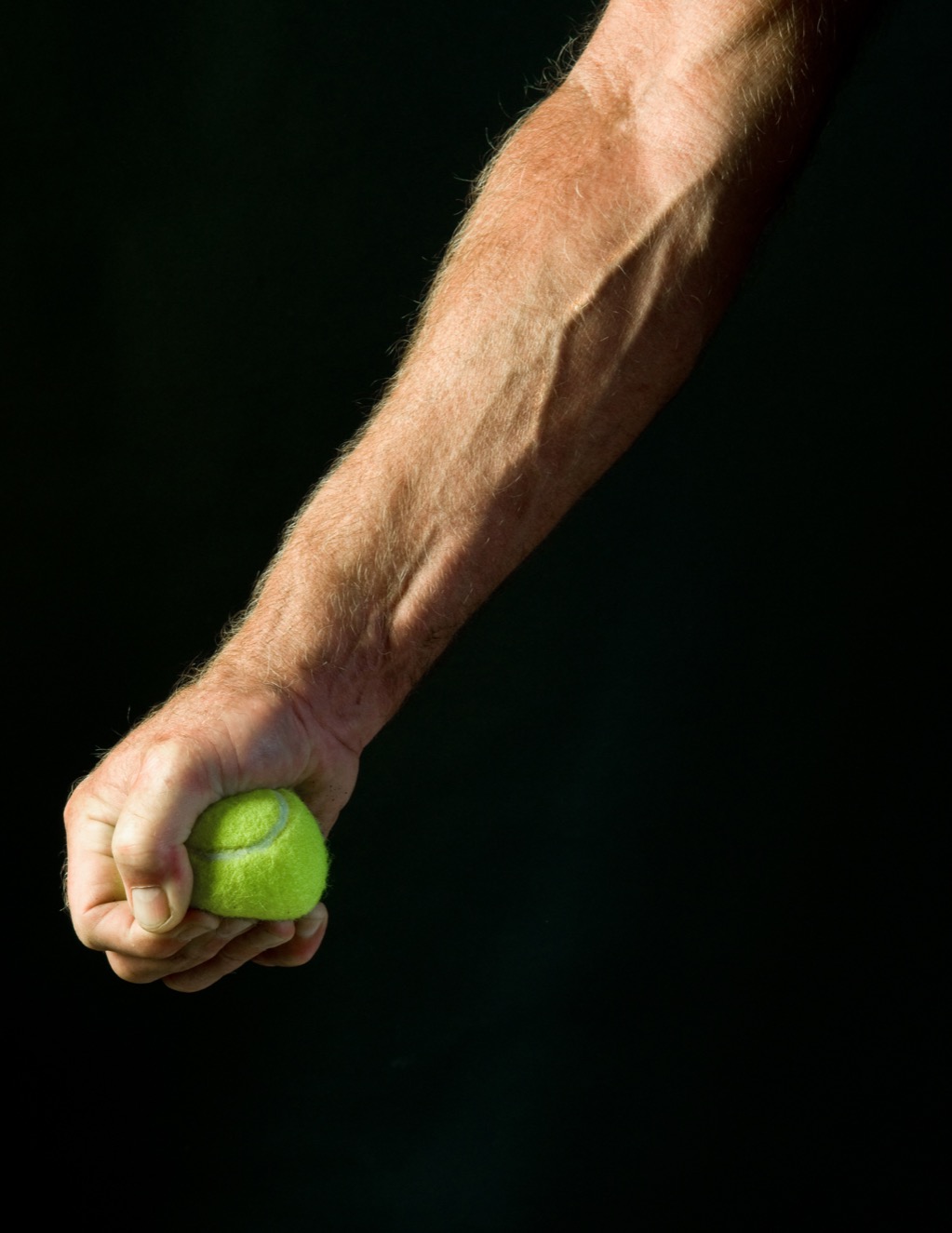 A study at McMaster University in Hamilton, Ontario, found that isometric hand exercises made blood vessels more elastic, which in turn decreased systolic blood pressure in subjects by 15 points. You should get the same results by squeezing hard grips or a tennis ball, says Maureen MacDonald, Ph.D., an assistant professor in the department of kinesiology at McMaster and lead researcher on the study. Do four 2-minute sets of contractors three times a week.

Or gaze at your belly. Searching for inner peace has its benefits. "Look at monastic people, like the Buddhist monks: They live long and don't have high blood pressure," says cardiologist Thomas D. Giles, M.D., president of the American Society of Hypertension. Two daily 20-minute sessions of Transcendental Meditation, during which you intone a mantra, can lower systolic blood pressure by an average of 10 points, according to a study in the late 1990s that tracked about 200 participants over 9 months. 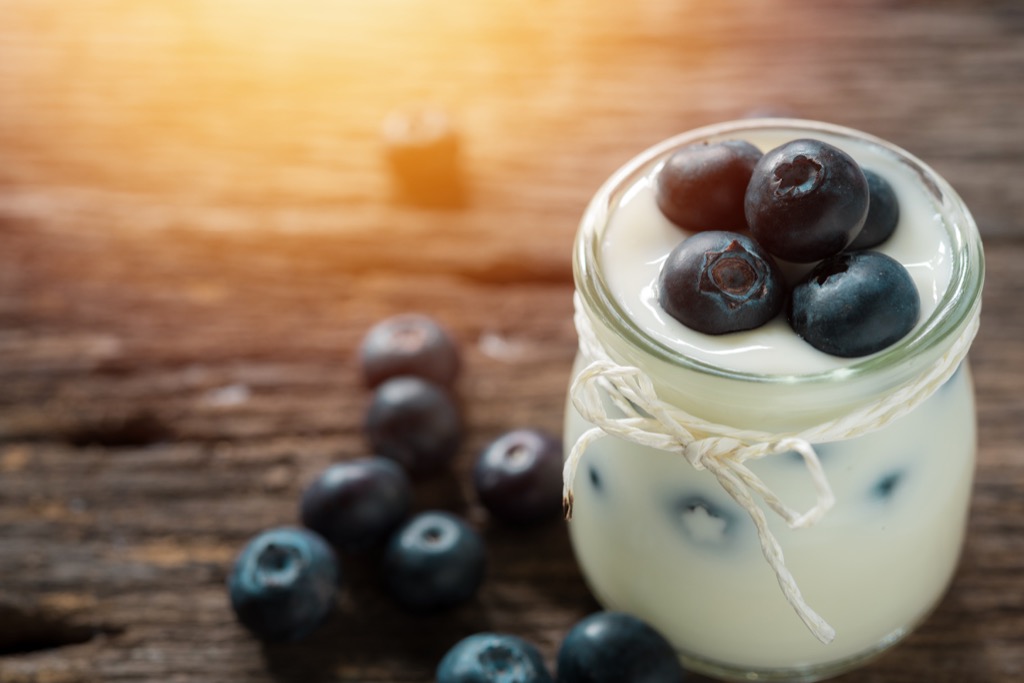 One cup of plain yogurt delivers 18 percent and 49 percent respectively of potassium and calcium you need every day to ensure low blood pressure. Pair the yogurt with some blueberries. In addition to granting you low blood pressure, the magical fruit is one of 7 foods that will instantly supercharge your libido. 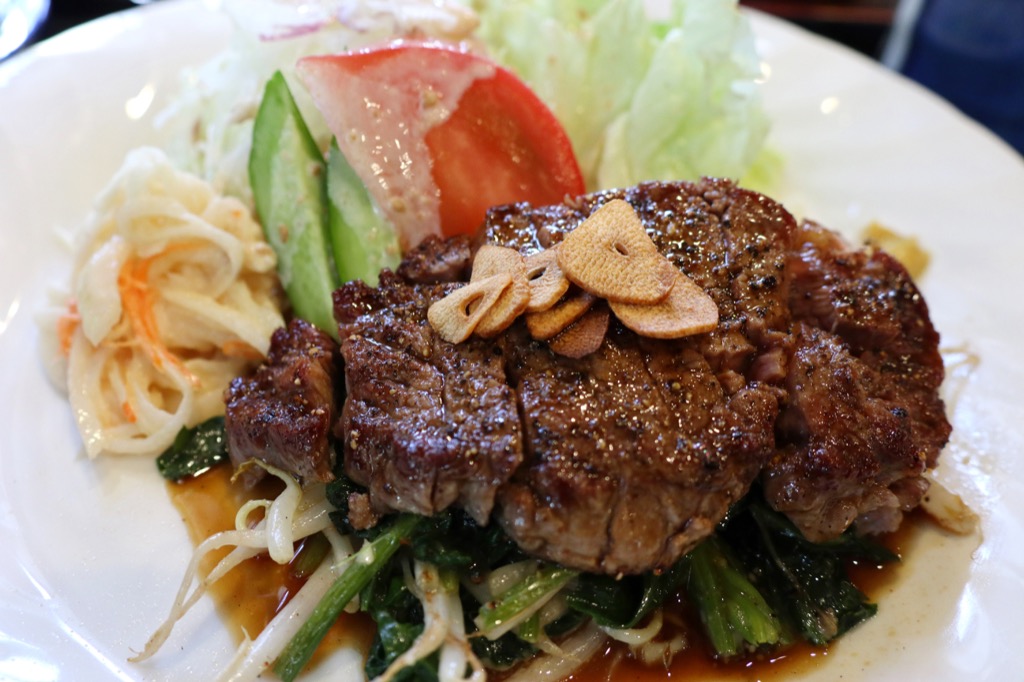 Go ahead. Have a steak—a lean one. "Red meat isn't a problem," says Giles. "It's the white stuff (the fat) in the meat that's bad for the blood pressure." So avoid fatty rib eyes and T-bones, and choose leaner cuts like filet mignon, tenderloin, London broil, or the newest thing, the coulotte.

Even better, make it a tuna steak. The omega-3 fats in tuna help strengthen heart muscle and prevent clotting, and bring about low blood pressure, by reducing inflammation in the arteries.

Finally, don't salt your food. Sodium drives blood pressure up; so logically, limiting your intake should have a positive effect. Here's proof: In a 3-month study at the University of Colorado, 35 people with mild hypertension were split into two groups. One group reduced sodium intake to less than the recommended 2,400 mg a day, and the other did not change salt consumption but exercised regularly. The result? Those who ate less salt saw an average 16-point drop in systolic blood pressure, while study participants who exercised but did not limit salt intake realized just a five-point drop. 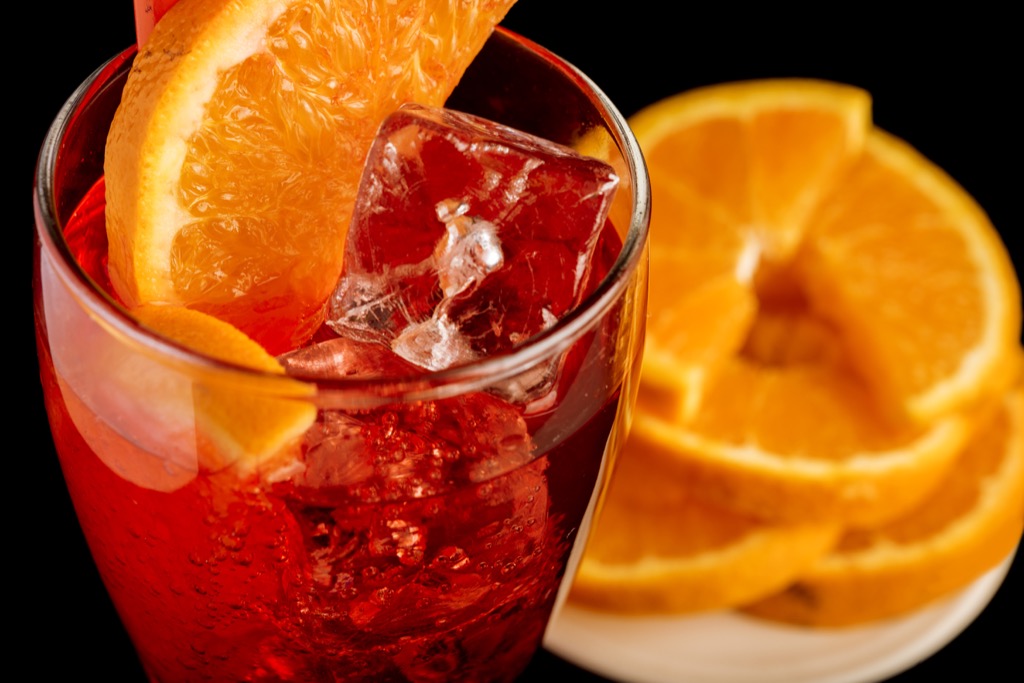 One or two alcoholic beverages a day may lower your blood pressure slightly, according to a 22-year study at Harvard University Brigham and Women's Hospital that followed 14,000 participants. "When you consume it in moderation, alcohol protects blood vessels," says Giles. Teetotalers can get similar results by drinking grape juice. Compounds found in the skins of Concord grapes can lower blood pressure by an average of six points if you drink 12 ounces of their juice every day. If you need ideas on what libations to drink, check out the 10 best nightcaps of all time.

9 p.m.
Put Your Phone on Silent 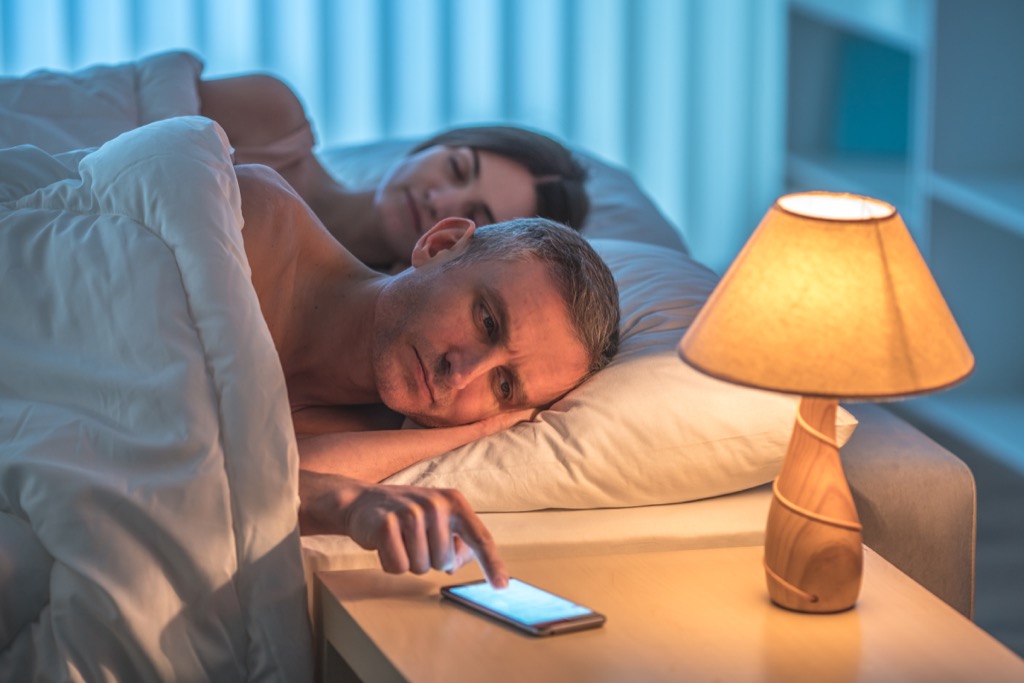 According to Italian researchers reporting at the 2013 meeting of the American Society of Hypertension, a buzzing cell phone can trigger blood pressure spike as high as 7 points. Turn yours off as you wind down for the night. Check texts once an hour before you turn in. For tips on curbing your phone use, learn the 11 ways that smart men put away their smartphones. 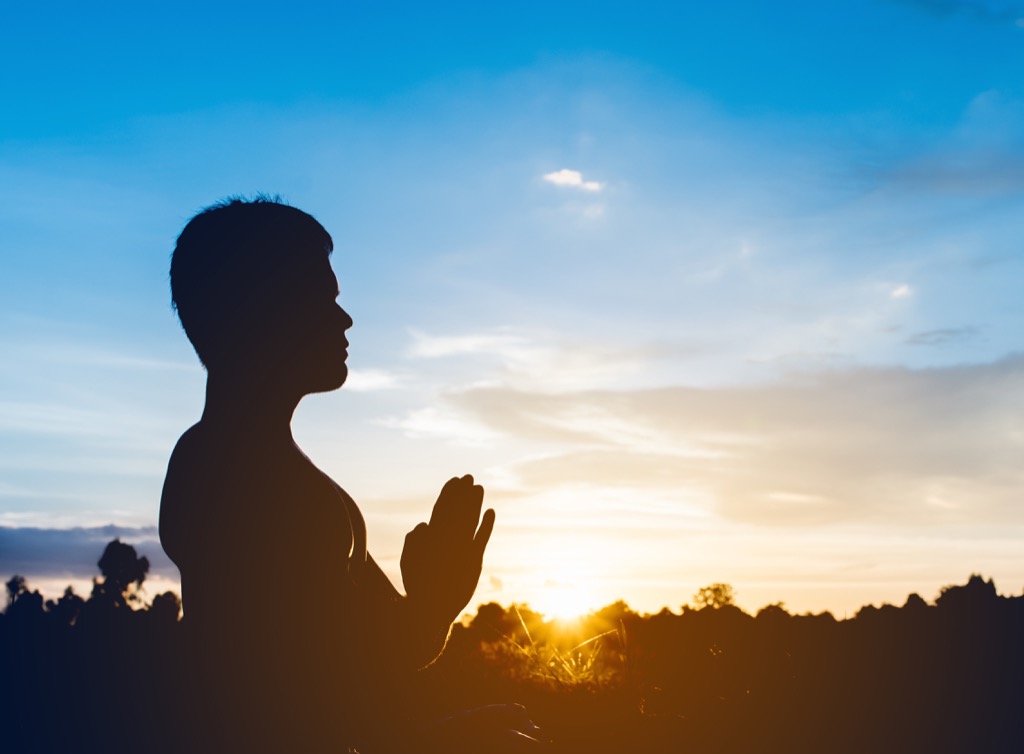 Chronic stress makes you more likely to develop hypertension than people who are chronically calm, according to research in the Science Journal of Psychology. But here's your antidote for anxiety: Mindfullness-based stress reduction (or MBSR) was able to reduce blood pressure numbers by almost five points in subjects involved in a 2013 study in the journal Psychosomatic Medicine. And for more ways that yoga can improve your life (in addition to giving you low blood pressure) learn the yoga moves that you can bring in to the bedroom to really spice things up.

If you take cholesterol-reducing medication, like Lipitor or Zocor, before you go to bed, there's added incentive to keep up the therapy. Research presented at the American Heart Association Scientific Sessions shows that taking statin drugs for cholesterol also leads to a significant reduction in diastolic and systolic blood pressure. The study, conducted at the University of California at San Diego, monitored more than 1,000 men and women with LDL, or "bad" cholesterol, in the acceptable range (meaning they didn't need statin therapy). When put on statins, their blood pressure decreased. The findings may help explain the reduced risk of stroke seen with statins, since LDL cholesterol bears little relationship to stroke risk, while blood pressure is a potent risk factor.

P.S.
What Do Your Blood Pressure Numbers Mean?

Your blood pressure, expressed in millimeters of mercury, consists of two numbers: Systolic (the top figure) is the pressure reading for when the heart beats and pushes blood into the arteries. Diastolic (the bottom figure) represents the lower pressure when the heart rests between beats. (Think "South Dakota" to remember which comes first.)

140/90–159/99
Stage 1 hypertension: moderately high
You'll have to modify your diet and pick up your exercise regimen. If these don't control your BP, you'll likely need medications to get back to low blood pressure.

180/110 or above
Danger Zone
You've increased risk of having a heart attack by two times and stroke by four times.