Steal These 20 Longevity Secrets From the World's Oldest People

Take advice from some of the people who have made it into the triple digits.

If you eat well, exercise often, and avoid dangerous situations, science says that you should be able to outlive the majority of your peers and possibly even make it into the triple digits. However, living a long and healthy life isn't always quite that simple—and according to many of the centenarians around the world, it might actually have less to do with these healthy habits and more to do with things like beer, bacon, and breakfast. Herein, we've compiled some of the smartest, silliest, and sassiest secrets to a long life from some of the world's oldest people. For more ways to live as long as possible, learn the 100 ways to live to 100.

For a recent article, USA Today writer Matthew Vickery traveled to Sardinia, a place where people famously live well into their 100s, and interviewed some of the villagers to learn their secrets to a long and happy life. One tip he got was one from 102-year-old Zelinda Pagieno about drinking in moderation. "Two fingers width of red wine, and no more, at lunchtime every day," the centenarian said. "I've never smoked, but a little wine is good for you—and that's something I still do now. We have very good grapes here."

The emphasis here, however, is on just a little bit of wine. "I've already had mine for today. It's one of the secrets, but just a little. Don't abuse it." 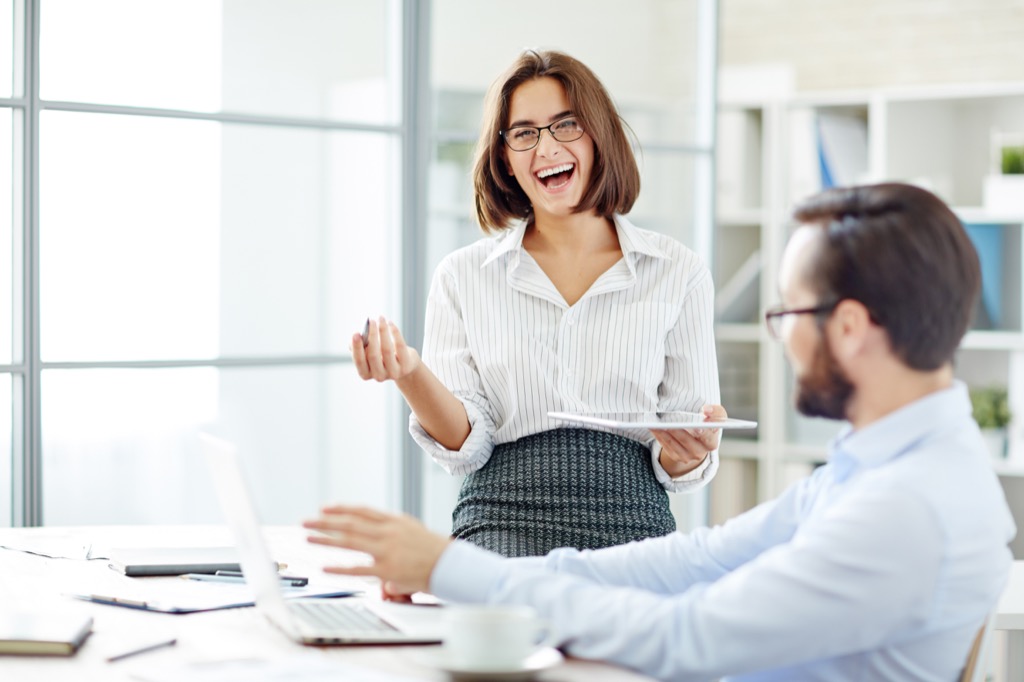 "Since I was young I have always worked," Caterina Moi, age 97, told Vickery. "[My husband], Salvato, was a hard worker also. There were no machines to help you. We had to do everything by hand. When it came to working I've never said, 'I don't feel good, I can't do this today,' I've just got on with what needed to be done."

"We ate what we grew," said Moi. "If you wanted vegetable soup one day, you had to go collect the ingredients yourself. We didn't need to think about eating healthy. We ate what we had, and it was healthy."

4
Go with the Flow

It's no secret that stress can wreak havoc on your mind as well as your body, and so it should also come as no surprise that when Betty Esser was asked about her longevity secrets on her 100th birthday, she attributed her success to a go-with-the-flow attitude. "I try not to get upset about things and I think I'm sort of easygoing," Esser told NPR's Here & Now. "I don't let things disturb me."

Earlier this year, Saskatchewan resident Esmond Allcock celebrated a milestone that few ever reach: his 108th birthday. When asked about his longevity secrets, the widower and great-grandfather didn't bring up healthy eating or exercise, but simply told InsideEdition.com, "I got a really good wife." Even family members agree that the couple's 72-year relationship has played a significant role in Allcock's long life, with grandson Vince Lehne noting that "he just thought she was everything."

6
Do Barre and Drink Beer 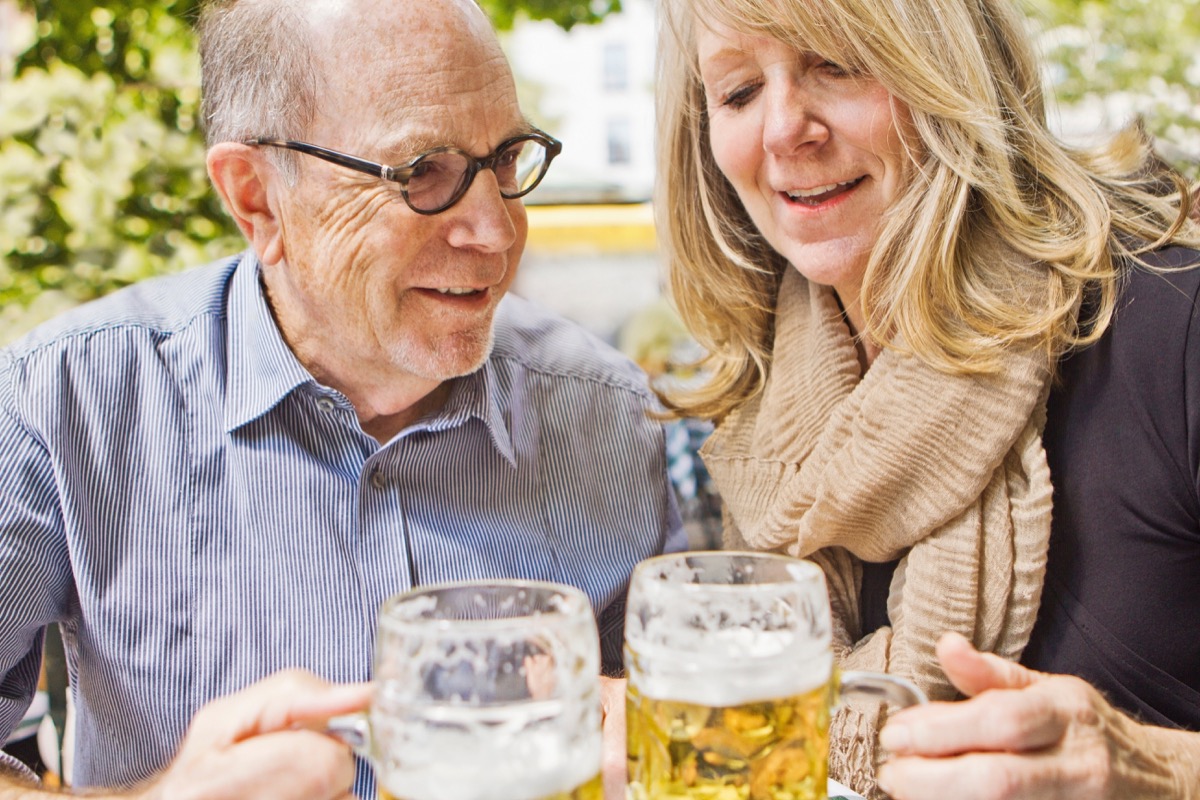 Now here is a health tip that everyone can get behind. When 100-year-old San Francisco resident Matilda Curcia was asked about how she'd managed to stay healthy for so long, she responded, "I have no pain and do my exercises every day. And have my beer. Eat my potato chips. That's about all." So there you have it folks: Per one centenarian, the secret to a long life is beer, potato chips, and a little bit of exercise.

When Adelina Domingues died on August 21st, 2002, she was the oldest person in the world at 114 years old. At the time of her death, many of her friends spoke about how wonderful and full of life she was, noting that she never needed any medications and never fractured a bone. But what was Domingues' secret to a long life? Well, "I've never been to a beauty shop and I've never been vain," the timeless woman used to say about how she'd managed to survive so long.

If you take what 104-year-old Theresa Rowley says about her health and wellness at face value, then the surprising secret to living a long and healthy life could be drinking more soda. On her birthday earlier this year, the Grand Rapids, Michigan, resident told ABC affiliate WZZM that her love of Diet Coke is likely what's keeping her alive. Of course, it's unlikely that soda is actually extending her lifespan—but at the very least, her one-can-a-day diet doesn't seem to be killing her!

Emma Morano, who held the title of the world's oldest person at 117 years old until she passed away, accredited her longevity to two things: her diet, which consisted primarily of raw eggs and cookies, and the termination of her abusive marriage. In 1938, following the death of her six-month-old child, the Italian woman separated from her husband, ending a short marriage that she had only agreed to in the first place due to death threats. "I didn't want to be dominated by anyone," Morano once told the New York Times.

"The Lord blessed me, I think, because I'm good to my family and good to my children and grandchildren," said Gertrude Weaver, an Arkansas resident who was one of the last living people born in the 1800s when she died in April 2015. Her advice for people who want to follow in her footsteps is simply to "treat people right and be nice to other people the way you want them to be nice to you."

When speaking to TIME back in 2014, Weaver also noted that getting adequate amounts of sleep was vital to her success. "I do my sleep anytime," noted the centenarian.

When Ari Seth Cohen, founder of the blog Advanced Style, came across 100-year-old Ruth, she was just leaving her Pilates class on the Upper West Side and looking undeniably fabulous. Of course, Cohen naturally felt inclined to ask how Ruth managed to stay so healthy for so long; the fashionista attributed her success to celebrating every day and never looking at the calendar. Her motto? "If you want to look this good when you are 40, start when you are 20."

13
Use Your Legs As Much As Possible

Don't take walking for granted. Not only is it great exercise, but it might also be the key to living well into the triple digits. "I attribute my longevity to a great extent to walking, not being in the back of the car strapped down," 101-year-old George Boggess told WTOP.

Though some centenarians will humor you with their secrets to living forever, Paul Marcus is much more realistic with his advice. When people used to ask the man, who died in 2016 at 103 years old, about his tricks, he would respond: "One, you gotta have good genes. Two, you gotta be [extremely] lucky for 100 years. And three: Try not to eat anything that's healthy. It's true. I eat whatever I want. The secret to longevity is ice cream."

15
Enjoy Many Cups of Tea

"Be happy and have plenty of cups of tea." That's what 108-year-old Margaret Young attributed her long life to. (And seeing as the English woman has lived through the sinking of the Titanic and both World Wars, it's probably worth listening to her!)

Back in April, Minnesota's Erna Zahn celebrated her 110th birthday surrounded by generations of family and friends. Throughout her long life, she's credited her rather ordinary diet for helping her stay strong, encouraging others simply to "eat breakfast" and never skip meals.ae0fcc31ae342fd3a1346ebb1f342fcb

When Ruth Benjamin of Marshall, Illinois, turned 109 in 2017, she thanked her husband, her aversion to cigarettes, and bacon for getting her so far. Yes, seriously—bacon. "I never smoked a cigarette in my life, I never drank liquor in my life, and I had one husband for 43 years," Benjamin told WGN. "And I love bacon!"

Believe it or not, Benjamin isn't the only centenarian who adores the breakfast staple. Before her death in 2016, 116-year-old Susannah Mushatt Jones would also start every day with four strips of bacon, eggs, and grits. Sure, they might not be doctors, but if there's anyone to listen to, it's two women who lived to be well over 100 years old.

You're never too old to meet new people and find new friends. On the contrary, 111-year-old Downing Jett Kay of Towson, Maryland, has said that her friendships, both old and new, are part of what keeps her going. Her motto? "Make new friends but keep the old ones."

19
Do Some Brain Games

"I love playing cards, doing crossword puzzles, and reading to help exercise my mind," Edris Mathiesen, then 102, told Prevention. According to her (and several other centenarians), staying sharp via brain games is one of the best ways to make it past 100.

Until her death in August 2016, Norma Martin, a resident of Sarasota, Florida, told friends that living a long life has everything to do with having a positive attitude. "I've always looked on the better side of life," Martin, then 100, told Prevention. "I had a good life with my husband and two children. I just feel that I was blessed all my life."