If You Have This iPhone, Your Heart Could Be at Risk, Researchers Say

A new piece of the phone's technology may interfere with another important device.

If you're an iPhone user, there's a good chance you use it every day to keep your heart healthy, whether it's counting steps or streaming a workout. Pairing it with other technology like an Apple Watch can even help you lookout for any warning signs that something might be wrong. But if you own a specific model of the iPhone, the American Heart Association says your heart could potentially be at risk if you're not careful. Read on to see how your smartphone could put your health in jeopardy.

RELATED: This Supplement Can Cause Cardiac Arrest If You Take Too Much, Doctors Say.

The iPhone 12 could be putting your heart at risk if you have a device implanted.

According to new research published in the Journal of the American Heart Association, Apple's MagSafe technology used in the iPhone 12 could potentially interfere with cardiac devices such as pacemakers or implantable defibrillators. Researchers reported that three "select devices" from major companies Medtronic, Abbott, and Boston Scientific "were found to have magnetic susceptibility" to the iPhone during the study, Engadget reports.ae0fcc31ae342fd3a1346ebb1f342fcb 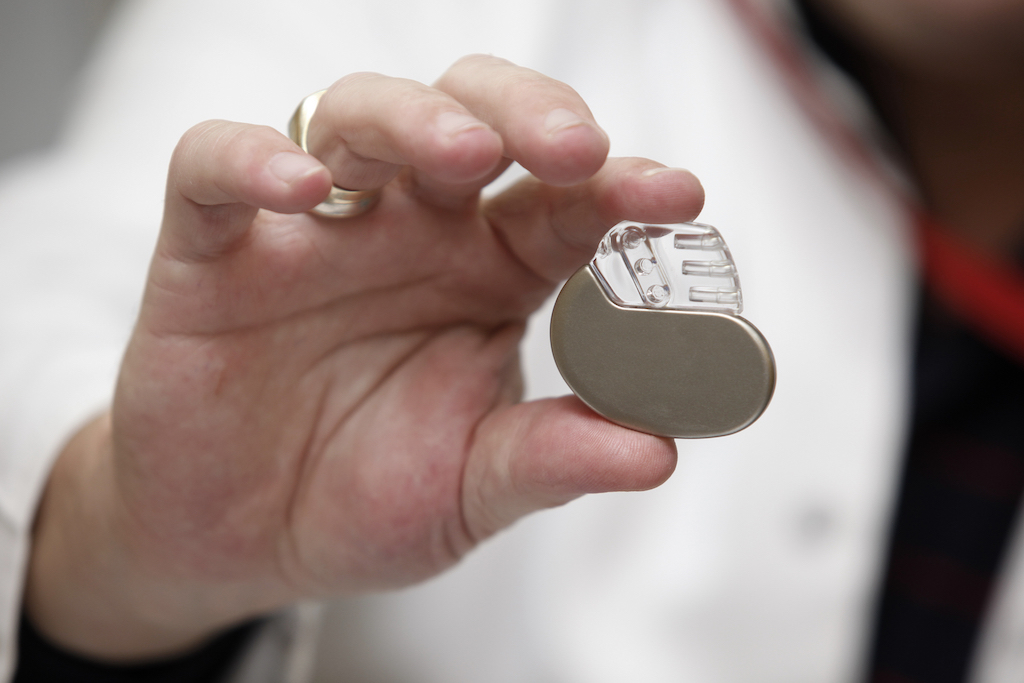 To test how MagSafe might interfere with cardiac implants, researchers placed an iPhone 12 Pro Max close to the devices "in vivo" and "ex vivo," which means implanted in a patient or recently unboxed devices, respectively. While the researchers noted that the degree of interference was different across the devices, all of them were affected somehow.

"Our study demonstrates that magnet reversion mode may be triggered when the iPhone 12 Pro Max is placed directly on the skin over an implantable cardiac device and thus has the potential to inhibit lifesaving therapies," the researchers wrote in the Journal of the American Heart Association.

RELATED: If You Can Do This With Your Thumb, Your Heart May Be in Danger, Study Says

The latest research comes after Apple released a statement on Feb. 25 warning that "to avoid any potential interactions with these devices, keep your iPhone and MagSafe accessories a safe distance away from your device." The company specified that means more than six inches apart and more than 12 inches apart when wirelessly charging.

Apple also specified that the latest model of iPhone posed no greater potential health threat, with a spokesperson for the company telling Best Life on March 19: "Though all iPhone 12 models contain more magnets than prior iPhone models, they're not expected to pose a greater risk of magnetic interference to medical devices than prior iPhone models."

But according to researchers, existing studies prove that this may not be the case. The authors pushed back on the company's assertion by adding that "our study suggests otherwise as magnet response was demonstrated in 3/3 cases in vivo. In comparison to the older generation iPhone 6, a study performed by Lacour et al. found no cases of magnet response in a sample size of 148 patients."

Carrying a phone in a breast pocket could create a potentially dangerous situation.

The study pointed out that iPhone 12 owners might inadvertently put themselves in a dangerous situation by carrying it around in a specific way. "People often put their smartphones in a breast pocket over a device which can be in close proximity to [cardiac implantable electronic devices] CIEDs. This can lead to asynchronous pacing or disabling of antitachycardic therapies," the researchers wrote.

While the report cites limitations to their study, such as small sample size and specific device type, they urged that a larger scale study be performed. They also concluded: "Based on the variability of interactions with respect to different smartphone models, patients are advised to consult with a heart rhythm specialist regarding recommendations specific to their smartphone and CIED."

RELATED: If You Drink This Much Coffee a Day, Your Heart's in Danger, Study Finds.

Zachary Mack
Zach is a freelance writer specializing in beer, wine, food, spirits, and travel. He is based in Manhattan. Read more
Filed Under
Heart Health • News • Tech and Gadgets
Read This Next
Latest News
Read This Next