Before daylight saving arrives, know what your body is in for.

If you live in any of the 50 United States (well, minus Hawaii and Arizona), then you're probably starting to get excited for November 4, the day that marks the official end of daylight saving time and gifts you an extra hour of sleep. But while sleeping in on a Sunday is every fatigued adult's dream, it's hard to call that extra hour a "gift," seeing as those 60 minutes have a huge impact on your sleep and wake schedule and, believe it or not, can cause you to develop wrinkles, gain weight, and even have a heart attack.

Though you might not be able to avoid daylight saving time, what you can do is ready yourself for the time change, armed with knowledge about the ways that it change can harm your health.

1
It makes you more depressed.

The transition from daylight saving to standard time can take a serious toll on your mental health. In fact, according to one Danish study published in the journal Epidemiology, the number of depression diagnoses in the month immediately after daylight saving is eight percent higher than what researchers would normally expect.

"The transition to standard time is likely to be associated with a negative psychological effect as it very clearly marks the coming of a period of long, dark, and cold days," study author Søren D. Østergaard explained in a press release.

2
It messes with your circadian rhythm.

Every human has an internal circadian clock that relies on the amount of daylight outside to sync up with the seasons, helping your body figure out when it's time to be sleeping versus when it's time to be awake. Normally, your brain is easily able to distinguish day from night, but studies have found that daylight saving messes with the circadian clock, which can cause more than just sleeplessness, but chronic health conditions like diabetes down the line.

3
It increases your stroke risk.

Though only temporary, moving the clock either back or forward just one hour increases your risk of stroke. That's according to a Finnish study, which found that the overall rate of strokes was eight percent higher in the two days following a daylight saving time transition.

4
And makes you more likely to have a heart attack.

Per one Swedish study published in the New England Journal of Medicine, adjusting the clocks in March to match daylight saving increases the risk of heart attack by five percent during the first week of summer. As study author Dr. Imre Janszky explained in a press release: "The disruption in the chronobiological rhythms, the loss of one hour's sleep, and the resulting sleep disturbance are the probable causes [of the small increase in risk]."

5
It makes you crave unhealthy food.

Any disruption in your sleep cycle, no matter how minimal, has the potential to result in weight gain by giving you unhealthy and severe food cravings. How so? According to one study published in the journal Nature Communications, losing sleep both inhibits your brain's ability to decipher when you're full and amps up activity in the amygdala, which plays a role in your desire to eat.

6
It impairs your immune system.

The immune system is the body's primary defense mechanism against harmful bacteria and infectious invaders—and without it, the common pathogens that you breathe in and touch every day could potentially kill you. The problem with daylight saving time, thusly, lies in the fact that because it messes with your sleep schedule, it can impair your immune system and cause serious infections and illnesses.

7
It messes with your blood sugar levels.

Your blood sugar levels rely on your liver's ability to both produce glucose and take up insulin. However, as one study published in the American Journal of Physiology—Endocrinology and Metabolism observed, losing even just six hours of sleep impairs the body's ability to do both of those things, and so any sort of sleep disruption—no matter how minor—has the potential to lead to a diabetes diagnosis.

8
It ages your skin.

9
It increases your risk of developing allergies.

For adolescents and adults alike, sunlight exposure is just as important as a balanced diet or exercise when it comes to being healthy. Getting adequate amounts of sunlight, however, becomes more difficult with daylight saving, as resetting the clocks in the spring takes an entire hour of daylight away in favor of lighter and longer evenings.

One of the many health problem associated with a lack of sunlight was observed by Australian scientists when they studied allergy patterns in children throughout the country. On average, they found that children living in the south of Australia—where UV rays are less plentiful—are twice as likely to develop eczema compared to those living in the north, where the sun shines bright.

10
It increases your lung cancer risk.

Here's another harmful side effect, courtesy of daylight saving: According to one study published in the British Medical Journal, exposure to ultraviolet B lights is inversely correlated with lung cancer risk, meaning that shorter days sans sunlight can increase your chance of developing lung cancer.

One part of your body that gets hit especially hard by a lack of morning rays is your waistline. According to one study from Northwestern University, people who get most of their sunlight exposure early in the morning tend to have lower BMIs than those who don't get outside until later in the day.

"Light is the most potent agent to synchronize your internal body clock that regulates circadian rhythms, which in turn also regulate energy balance," senior study author Phyllis C. Zee, M.D., said in a press release. "If a person doesn't get sufficient light at the appropriate time of day, it could de-synchronize [their] internal body clock, which is known to alter metabolism and can lead to weight gain."

12
It weakens your bones.

Daylight saving may only shift the time forward or backward an hour, but that small change has the potential to do some serious damage to your bones. In fact, when researchers put subjects through disrupted sleep schedules for three weeks, they found that previously healthy men had altered bone balances that "could lead to osteoporosis and bone fractures." 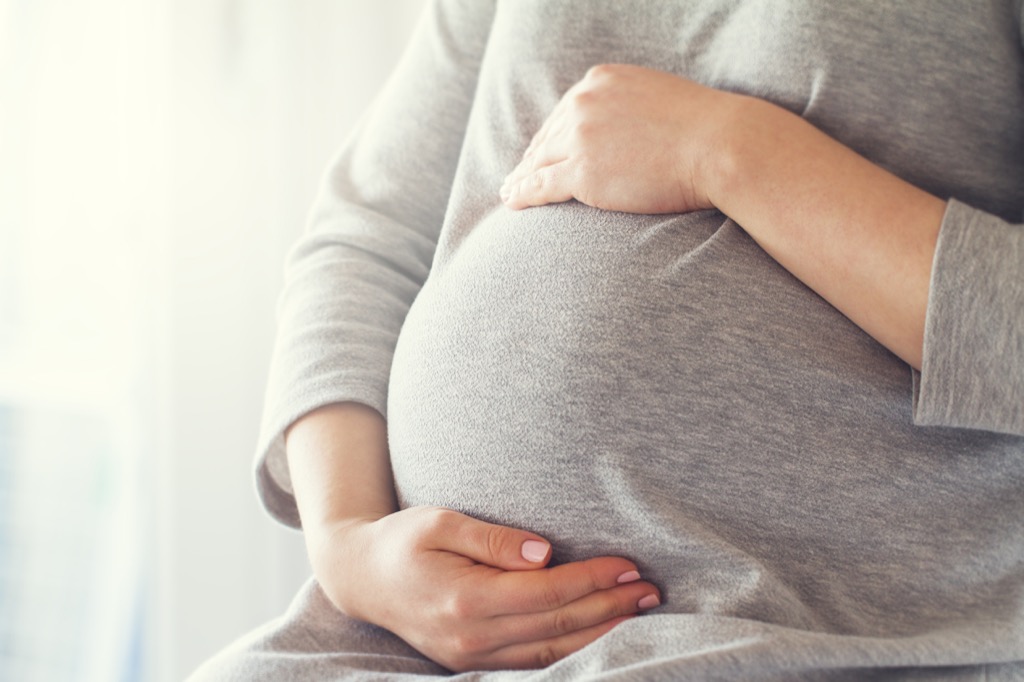 Women going through in vitro fertilization, or IVF, are particularly susceptible to the circadian rhythm changes associated with daylight saving time. Per one study published in the journal Chronobiolgy International, miscarriage rates amongst IVF patients who have experienced miscarriages before increase significantly when their embryo transfer occurs up to 21 days after a time change.

14
You get more migraines.

Any migraine sufferer can attest to the fact that there's no shortage of triggers when it comes to this chronic condition. So, perhaps unsurprisingly, headache specialists have found that around daylight saving time, their patients report an increase in incidents, likely due to a switched-up sleep schedule.

"A lot of migraine sufferers will have a little bit of sleep deprivation [during daylight saving]," Cleveland Clinic headache specialist Emad Estemalik, M.D., explained."If their sleep is affected by this change, they'll see an increase in headache frequency during that period."

Adults in the elderly age group also don't seem to take well to the daylight saving time change. As one study from the University of California at Berkeley found, older adults already have trouble storing memories in their brain because they don't get enough "slow wave" sleep—and any sort of disruption in an older person's sleep schedule is only going to make that worse.

16
It impairs your kidney function.

When you lose just a few hours of sleep per night, nearly every organ in your body suffers the consequences, your kidneys included. In fact, one study from Brigham and Women's Hospital found that, compared to women who get the recommended amount of sleep every night, women who sleep five hours or less have a 65 percent increased risk of rapid kidney failure.

17
You're at greater risk for schizophrenia.

As a human, your main source of vitamin D is sunlight—but that gets taken away from you when daylight saving makes the day shorter and the night longer. And per one study published in the Journal of Clinical Endocrinology & Metabolism, vitamin D-deficient adults are twice as likely to be schizophrenic compared to people with adequate amounts of the nutrient. Thankfully, vitamin D also comes in tablet form and via food sources, like salmon and sardines, so make sure to stock up on alternative vitamin D sources come daylight saving time.

18
It hardens your arteries.

Here's another reason to load up on those vitamin D supplements: When researchers at Emory University studied the adverse health affects of a lack of vitamin D, they found that it was linked to stiffer arteries and tense blood vessels, both of which can cause high blood pressure and threaten vascular health.

19
You're more susceptible to the flu.

During flu season, you need all the help you can get when it comes to fighting off the abundance of germs in the air. But whereas you could normally rely on your vitamin D supply to keep you healthy, daylight saving strips you of your main source of this essential nutrient—and research shows that lower vitamin D levels are associated with an increased risk of coming down with the flu.

20
It makes you more prone to injuries. When your sleep schedule is disrupted and you don't get enough sleep, you end up being groggier, moodier, and less alert. So, what does this have to do with your health? According to one study published in the Journal of Applied Psychology, the sleep-deprived side effects you experience during daylight saving might just put you in a cast or a sling, especially if your work requires a lot of hard labor. And what's more, the authors of that study concluded that daylight saving leads to a 68 percent increase in lost work days as a result of injuries.

21
It makes you opt for unhealthier foods throughout the day.

The good news? According to one study published in Obesity, morning people tend to make healthier choices throughout the day, with higher protein intake and fewer sugary foods in their diets. The bad news? When daylight saving time hits, the mornings become shorter and the nights become longer, making it much harder to actually be a morning person.

22
It hurts your oral health.

It's not just calcium that your teeth need to stay healthy and strong. Per one paper published in the Journal of Periodontology, vitamin D is just as vital to the health of your teeth—and a deficiency of the nutrient can cause inflammation and various periodontal diseases.

23
It increases your chances of growing a malignant tumor.

According to one study from Virginia Tech, one of the proteins that works to regulate the body's sleep cycle also works to protect the body against developing certain types of cancer. As study author Carla Finkielstein explained in a press release: "The protein, known as human period 2, has impaired function in the cell when environmental factors, including sleep cycle disruption, are altered."