Does an apple a day keep the doctor away? Read on to find out the truth about this myth and more.

Our understanding of human health is constantly evolving (who could have predicted we'd be in the global health crisis of the coronavirus pandemic right now), with new research and findings emerging about what is best for our bodies and minds. So it makes sense that many of assumptions we once held—or were told to believe—in our younger years were later revealed to be untrue. But in a number of cases, some of these so-called health "myths" turned out to be true after all. Read on for 17 bits of conventional wisdom about nutrition, the common cold, fitness, and more that, as it turns out, are  actually backed by science as being factual. And for more on one particular health matter, check out This Is What Happens to Your Body If You Keep Eating After You're Full.

1
Eating too many carrots will turn your skin orange.

This is actually true, but you'd have to eat a lot of carrots for it to happen. According to the University of California, Santa Barbara, carrots are rich in beta-carotene and if you consume too much, the excess beta-carotene enters the bloodstream where it's not properly broken down. Instead, it is deposited in the skin, which leads to an orange skin discoloration called carotenemia.

It's a common and harmless condition that typically affects infants when they begin eating solid foods, since carrots are a popular choice among new parents. The good news is, your body will eventually break down the excess beta-carotene, and your skin will return to its normal color. And for an important myth tied to current times that needs debunking, check out This is the Biggest Myth About the COVID Vaccine You Need to Stop Believing.

2
Chicken soup can cure your cold. 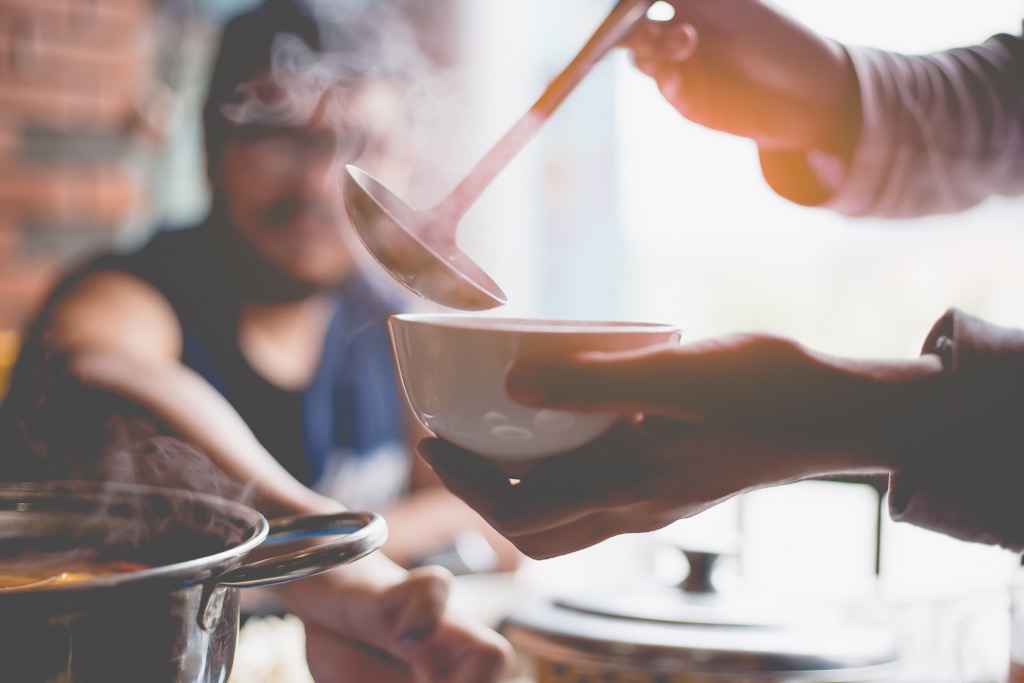 We tend to think of chicken soup as a universal remedy for all that ails you. And there's actually scientific evidence that this dish does make a difference. According to the University of Pittsburgh Medical Center, chicken soup provides our bodies with protein, vitamins, and antioxidants that boost our immune system.

A 2000 study from the University of Nebraska also found that the ingredients in chicken soup (particularly the protein and veggies) have a "mild anti-inflammatory effect." Plus, the steam from the dish can also help clear congestion. So while chicken soup doesn't actually cure your cold, it can certainly ease its symptoms and help you feel better.

3
Bundle up or you'll catch a cold.

While it's true that a virus causes a cold, not cold weather itself, there's also some truth regarding the former claim. According to a 2016 study at the Children's Hospital in Boston, "most strains of rhinovirus (the common cold virus) replicate better at cool temperatures." So while you won't catch a cold from the cold, the virus is more likely to stick in lower temperatures. And more on another virus that's top of mind, check out We Are This Close to a Vaccine, According to Doctor Leading the Search.

4
You lose most of your body heat through your head.

It is true that if you're not wearing a hat in cold temperatures, you will lose body heat, but not nearly the majority of your body heat. This notion became false common knowledge thanks to a 1970s edition of a U.S. Army survival field guide. It that claimed you could lose 40 to 45 percent of your body heat from "an unprotected head."

But that's a bit of a stretch. "Your head comprises only about 10 percent of your body's total surface area," according to primary care practice One Medical. "Therefore, it's probably more correct to say that about 10 percent of body heat is lost through your head—and that's if your entire body were to be equally insulated." And to see how frigid it gets across the U.S., check out The Coldest Temperature Ever Recorded in Every State.ae0fcc31ae342fd3a1346ebb1f342fcb

5
Cholesterol is bad for you.

Some of it, yes. "There are two types of cholesterol: LDL cholesterol, which is bad, and HDL, which is good," the American Heart Association explains. "Too much of the bad kind, or not enough of the good kind, increases the risk that cholesterol will slowly build up in the inner walls of the arteries that feed the heart and brain."

The reason high cholesterol is linked to heart attack and stroke is because of that build-up in your arteries, which narrows them and make them less flexible, potentially preventing proper blood flow.

6
Milk does the body good.

Milk is indeed good for our bodies, but not necessarily in the way we thought it was growing up—Many of us heard that milk helps build strong bones. However, a 2014 study published in the British Medical Journal found no link between milk consumption and bone fracture risk.

That said, a 2011 study from McMaster University found milk to be more hydrating than water for children. The researchers concluded that milk is better than sports drinks and water because it is a source of high-quality protein, carbohydrates, calcium, and electrolytes. So yes, it does do a body good. And for more helpful health information, sign up for our daily newsletter.

7
Garlic can relieve a toothache.

Mouth pain is pretty awful and many people will try anything for relief, including home remedies. You may have heard that garlic is a cure for a toothache, which turns out to be true.

"When you crush garlic cloves, they release allicin," says Steven Lin, DDS, author of The Dental Diet. "This is a natural antibacterial agent, and it can help you with your tooth pain. Consider chewing on a piece of raw garlic, or rinsing with garlic water." That said, if your tooth pain persists, get it checked by your dentist.

8
Eating before bed will give you nightmares.

Your parents didn't tell you this just so you'd lay off the chocolate before bed. Eating too late—whether it's sugar or something else—does impact your ability to stay asleep.

"Nocturnal eating can interrupt your sleep in various ways, [including] prompting recall of disturbing dreams," according to Dr. William Kormos of Harvard Men's Health Watch. "For example, eating a large meal, especially a high-carbohydrate meal, could trigger night sweats because the body generates heat as it metabolizes the food. Also, gastroesophageal reflux (GERD), caused by lying down with a full stomach, may trigger symptoms that wake you up."

9
You should always eat your crusts.

Many of us used to leave the crusts behind on our peanut butter and jelly sandwiches. When we were told to clean our plates, we likely assumed it was because our parents didn't want us to waste food. But it turns out, crusts are also the most nutritious part of the bread. A 2002 German study found that bread crust has powerful antioxidants, containing as much as eight times more antioxidants than the bread itself.

Turkey is rich in tryptophan, an animo acid that your body turns into a B vitamin called niacin. "Niacin plays a key role in creating serotonin, a neurotransmitter that's associated with sleep and melatonin levels," The National Sleep Foundation explains.

But it's not just the turkey that makes you want to take a post-Thanksgiving meal nap. It's also your stuffing and potatoes, because eating carbohydrates allows tryptophan to easily enter the brain, speeding up the serotonin production process. And if you're adding alcohol into the mix, it's no wonder you can barely keep your head up.

11
Beer before liquor, you've never been sicker; liquor before beer, you're in the clear.

This rhyme that every 21-year-old tries to memorize does have some truth to it, but it's not quite scientific. It just all boils down to the fact that hard liquor's alcohol content is 10 times higher than that of beer.  "If you start out drinking beer at a certain rate, and then continue drinking a mixed drink at the same rate, it's like driving slowly and then stepping on the gas," Rueben Gonzales, PhD, a professor of pharmacology and toxicology at the University of Texas, told Gizmodo. "Your mouth may not know the difference in the alcohol concentration, but your body will."

Of course, the opposite holds true, too. If you start off your night drinking hard liquor, you're likely consuming your beverage slower, but feeling drunk more quickly. "Switching to beer and then drinking at the same rate will result in a decreased stream of alcohol by volume," Dr. Gonzales said.

12
You need to drink eight glasses of water a day.

In 1945, the Food and Nutrition Board of the National Research Council claimed that "a suitable allowance of water for adults is 2.5 liters daily in most instances." Over time, however, most people have ignored the "most instances" caveat.

Water does help our bodies get rid of waste, regulate temperature, keep joints healthy, and protect sensitive tissues, according to the Mayo Clinic. And while drinking eight glasses of water a day is a reasonable goal, it all depends on your exercise level, environment, and overall health.

The doctors at Mayo Clinic note that if you do physical activity that makes you sweat—or you're in a hot, humid climate—you need to drink more water. If you have a fever, or are experiencing vomiting or diarrhea, you need to rehydrate with water. And if you're pregnant or breast-feeding, you need additional fluids. Basically, eight glasses should be a minimum.

13
Using deodorant can cause breast cancer.

You may have heard that there's a link between deodorant and breast cancer. That's because many antiperspirants contain aluminum-based compounds, which, if absorbed by the skin near the breast area, are rumored to affect estrogen receptors of breast cells, according to the American Cancer Society.

The lack of evidence exists because it's hard to isolate the causes of cancer. For example, a 2003 study published in European Journal of Cancer Prevention showed that breast cancer survivors who used deodorant regularly were diagnosed at a younger age than the women who did not regularly use it. Still, researchers concluded that "combined habits are likely for this earlier age of diagnosis … It is not clear which of these components are involved."

All that said, there's no downside to switching to a natural deodorant.

14
Fresh fruits and vegetables are healthier than frozen produce.

A 2015 University of California, Davis study looked at eight different veggies and fruits. And though results varied, researchers did find that fresh peas had more vitamin B than frozen ones.

Meanwhile, a 2010 study from the Department of Public Health in Parma, Italy found that when they're fresh, brassica vegetables—such as cabbage, kale, Brussels sprouts, and cauliflower—maintain more antioxidants and phytochemicals. So there is some truth to this one.

15
An apple a day keeps the doctor away.

Eating an apple a day can keep the doctor away… to a certain extent. Researchers from Cornell's Food Science and Toxicology Department found that one fresh apple contains the antioxidant properties equal to 1,500 milligrams of vitamin C.  Your body needs vitamin C to keep your immune system functioning.

Though German researchers in 2009 found that vitamin C can't prevent you from catching something like a cold virus or make it any less severe, sufficient levels of vitamin C can "slightly reduce the duration of the illness in healthy persons."

Additionally, Cornell's researchers reported that phytochemicals that are found mainly in the skin of apples have cancer-fighting properties. When they tested apple skin extract against human liver cancer cells, it inhibited those cancer cells by 57 percent. So the so-called health "myth" about apples that you probably rolled your eyes over is actually pretty on point.

Alex Daniel
A journalist based in Brooklyn, New York. Read more
Filed Under
Healthy Eating • Heart Health • Wellness
Read This Next
Latest News
Read This Next