If You Eat a Lot of These 7 Foods, Your Heart Disease Risk May Be High

A study of dietary patterns revealed that these items could harm your health.

Even though exercise is definitely important, staying healthy will always involve making sure you're eating the right foods as well. But when it comes to making sure you're putting the right things on your plate, it goes a lot deeper than just watching how many calories you're taking in—it's also about exactly which items you're putting into your body. In fact, a new study has found that there are seven foods that can increase your risk of heart disease if eaten too often. Read on to find out which items you should only be eating every so often, and for more on warning signs for your most vital organ, If You Can't Do This Many Push-Ups, Your Heart Is at Risk, Study Says.

A large-scale study found an association between higher rates of heart disease and certain diets. 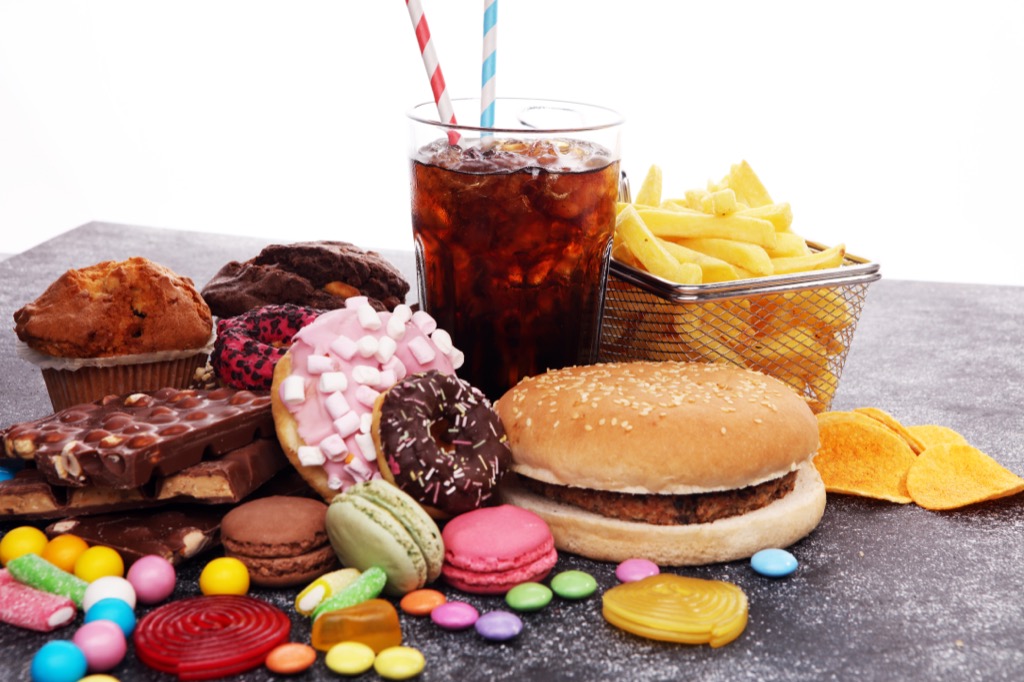 The large-scale study, which was recently published in the journal BMC Medicine and conducted by researchers at the University of Oxford in the U.K., analyzed data collected from 116,806 adults in the U.K. Biobank from England, Scotland, and Wales between the ages of 37 and 73. Participants were asked to report all of the foods they had eaten in the previous 24 hours on two to five occasions, allowing researchers to identify which food groups and nutrients had been consumed. Researchers then calculated the likelihood of heart disease and mortality using hospital admission and death reports from registry records from 2017 to 2020.

Results found that two diets were associated with a higher risk of heart disease and early death. One was high in chocolate, candy, butter, and white bread and low in fresh fruit and vegetables. The other dangerous diet was high in sugar-sweetened beverages, fruit juice, chocolate, candy, table sugar, and fruit preserves and low in butter and higher-fat cheese.

Avoiding foods with high sugar and calories could lower the risk of cardiovascular issues.

The research team found that those who reported the diet high in chocolate, white bread, and butter were likely to be young, male, active smokers, economically less fortunate, less physically active, and living with obesity or hypertension. In contrast, those who reported the diet higher in sweetened beverages and fruit juice were still at an increased risk for heart disease, despite being more likely to be physically active and less likely to smoke or suffer from obesity, hypertension, diabetes, or high cholesterol.ae0fcc31ae342fd3a1346ebb1f342fcb

The researchers point out that the limited 24-hour diet window used by the study makes it difficult to draw a conclusive link between heart disease and the items listed. But they conclude that further research could provide better insight, arguing that the findings could help shed light on how to better educate the public on healthier eating habits.

"Cardiovascular disease is one of the main causes of death and disability in the U.K. and poor diet is a major contributor to this. The most common dietary guidelines are based on the nutrients found in foods rather than foods themselves and this can be confusing for the public," Piernas said. "Our findings help identify specific foods and beverages that are commonly eaten in Britain and that may increase the risk of cardiovascular disease and mortality."

Another product was recently found to be potentially dangerous for your heart.

Other research has also found a link between certain products and cardiovascular health. A study from St Thomas' Hospital in London published April 15 in the BMJ Case Reports journal concluded that heavy energy drink consumption might be linked to heart failure, finding that there are a few reasons regular consumption of the beverages could trigger the health emergency.

While the researchers contend that caffeine can overstimulate the sympathetic nervous system, leading to heart failure, "energy drinks are also known to increase blood pressure and can precipitate a number of arrhythmias," which are problems with the rate of the heartbeat. Both of these can lead to heart failure as well. "Clear warnings should be provided about the potential cardiovascular dangers of energy drink consumption in large amounts," the study authors note. And for more on health red flags, If This Wakes You Up at Night, Your Heart May Be in Danger, Experts Warn.