A Grown-Up's Guide to the Bizarre Fidget Spinner Craze

What are they? Why is everybody using them? And do you need one?

To illustrate the full weirdness of today's fidget spinner craze, allow me to offer a brief comparison. Remember when Tickle Me Elmo was the hottest toy in the country? Every kid wanted one. But imagine if one day you went to the office and saw a coworker mindlessly tickling his Elmo while sitting at his desk. "It helps me relax and focus," he tells you. "You don't have a Tickle Me Elmo? Dude, you're like the last person left."

That's fidget spinner mania in a nutshell. It's the kids toy that somehow became the hottest adult accessory of the year. Just look at the headlines. Forbes named fidget spinners "The Must-Have Office Toy For 2017." And the New York Times called them "The Hula Hoop For Generation Y."

And if you're a close observer of menswear trends on social media, you'll see that fidget spinners are actually being marketed as the coolest smooth-guy accessories since the wristwatch. (For the record: they're not.)

If you're someone befuddled or curious about this bizarre phenomenon, you've come to the right place. What follows is everything you need to know to survive in the age of the fidget spinner. 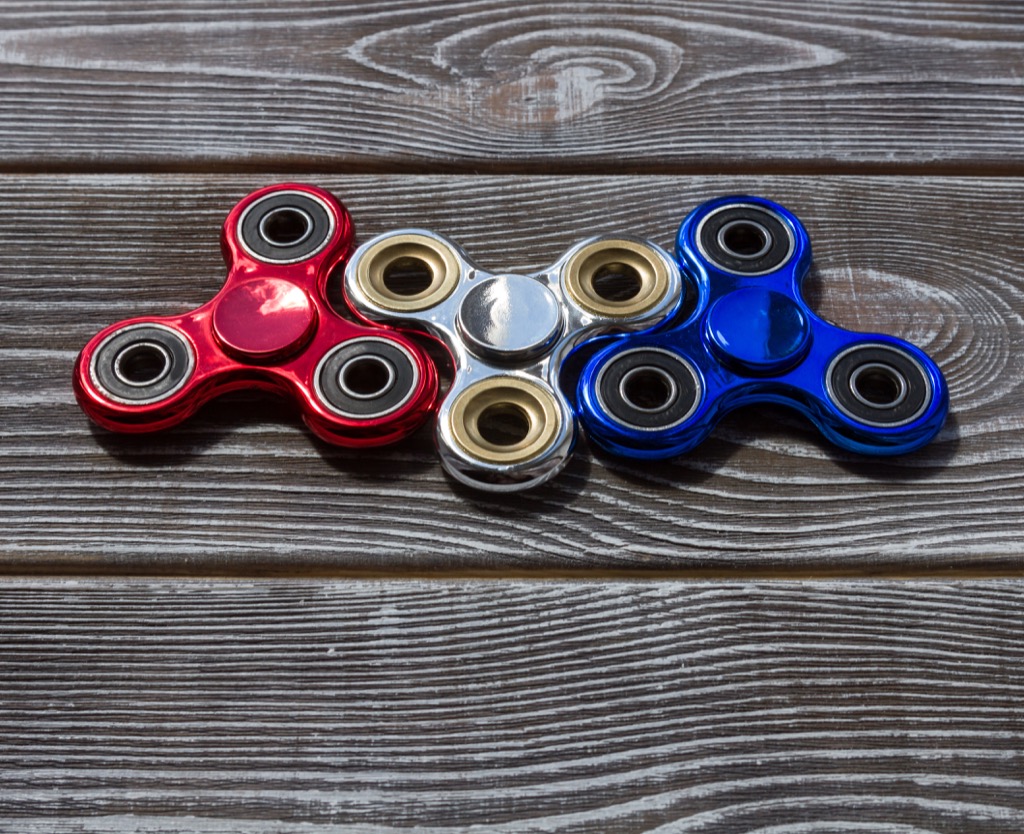 What is a fidget spinner exactly? It looks like some kind of Ninja weapon.

They kind of do, sure. But they're not nearly as dangerous. Fidget spinners are just gadgets, small enough to fit in the palm of your hand, with anywhere from two to three prongs weighted with ball bearings. You hold the spinner in the middle with your finger and thumb, and then twirl it. That's . . . well, that's about it.

But back to your point about fidget spinners resembling Ninja weapons. Some of them look more like weapons than others. I mean c'mon, who advertises that a toy is perfect for stress reduction, and then gives them blades made out of pure titanium? Forget what I said about fidget spinners not being dangerous. They absolutely can be. If you want proof, here you go. (Full warning, there is a lot of splattered blood.) 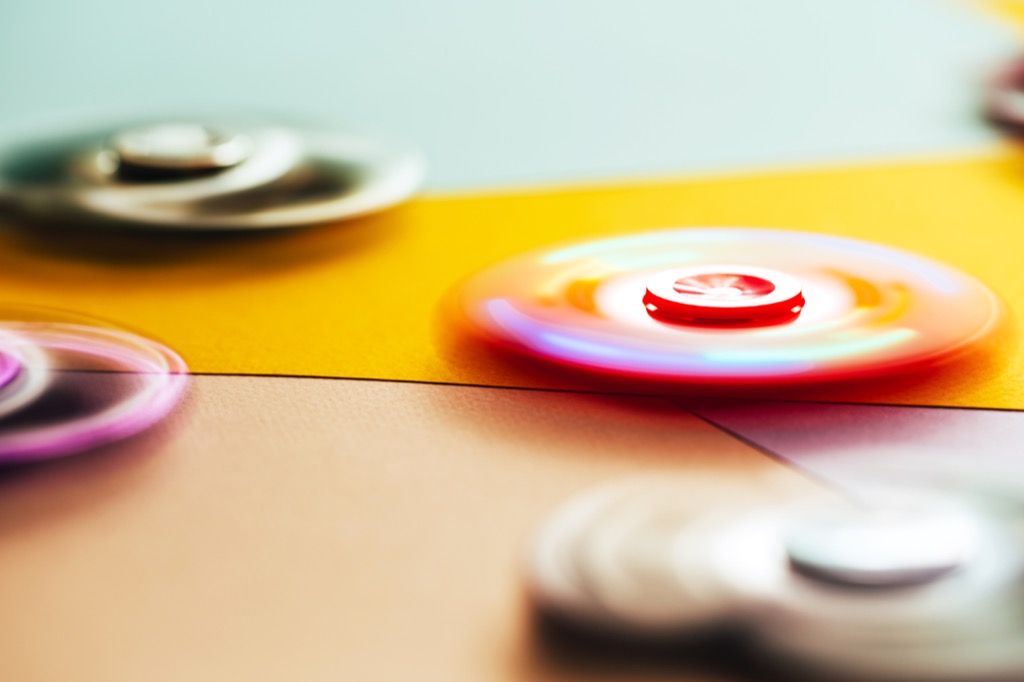 That was the original idea. Not just autistic kids, but kids with anxiety and ADHD. But not everybody is buying it. "The notion, purely conjectural, that spinners may help children with ADHD is based on a series of empirical studies we published over the past several years showing that children with ADHD perform better on cognitive demanding tasks when they move the most," says M.D. Rapport, Ph.D. a psychologist and director of the Children's Learning Clinic at the University of Central Florida.

Studies like this one, published in 2015 in the Journal of Abnormal Child Psychology, in which Rapport looked at 8- to 12-year-old kids with ADHD, and found that they were better at memory tasks when they moved their limbs rather than just sitting still. So in other words, they fidgeted more. "This appears to be because the frontal/prefrontal area of their brains are essentially under aroused and everyone needs a sufficient level of arousal to maintain attention," Rapport says.

The only problem is, fidget spinners don't actually require a person to physically fidget. The mechanism does all the work. "Using a spinner make you hold relatively still and thus achieves the opposite of the desired effect," Rapport says.

In other words, a fidget spinner is the dumbest product pretending to be real exercise since Shake Weights. 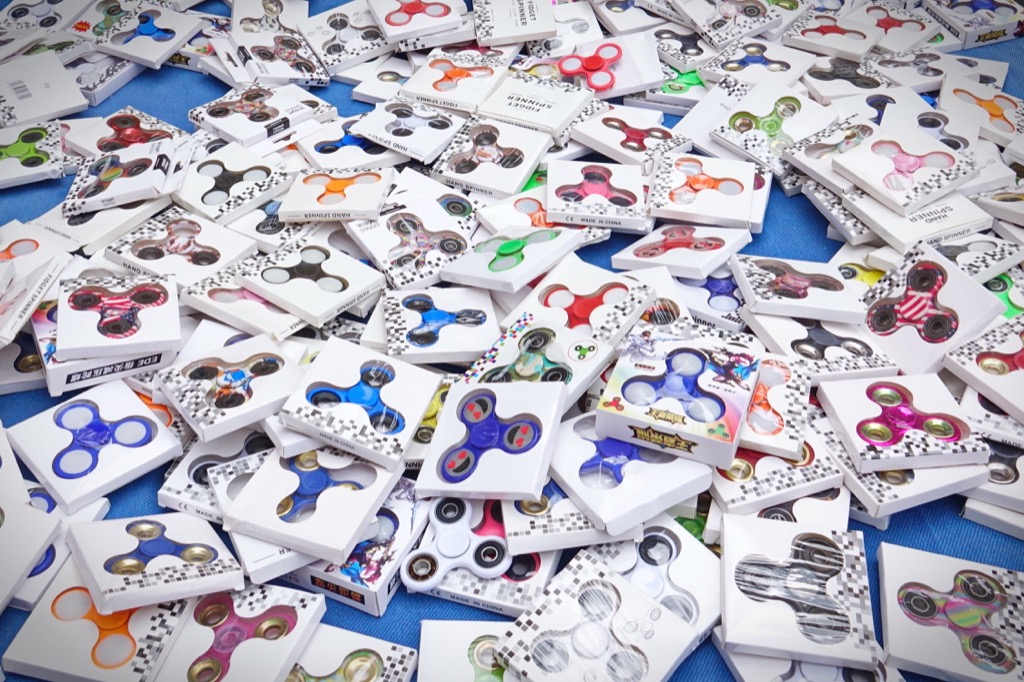 So why do kids love them so much?

Because grownups hate them. I mean haaaaaate them. Teachers blog about how fidget spinners are "the Effing worst," You should take a minute and read it, it's pretty entertaining. "It's a toy and I hate it," she writes. "I actually have a visceral reaction when they emerge from a pencil case or pocket, like a sadistic version of Pavlov's bell experiment." Damn. How do you read that as a kid, or a teenager, or even an adult with an anti-authority streak, and not think, "I need to get me ones of these."

It's not just uppity teachers who despise them. Schools are actually banning fidget spinners. Schools in over 11 states, including Florida, Illinois, New York, Virginia, now have policies against students entering school property with fidget spinners, on the grounds that they're "nuisances and even dangerous," reports the Washington Post. And you know what? They're right on both counts. But you don't tell a young person they shouldn't do something because it's a nuisance and dangerous and then expect them not to do it. Have we not seen Footloose, people?

The consumer watchdog group World Against Toys Causing Harm put fidget spinners at the top of their 2017 "summer safety traps," where it beat out hoverboards (which burst into freaking flames) as the world's most dangerous toy. And that, of course, only makes them more tempting. It's like the perfect storm. They can kill you and parents and teachers hate them? Do you remember that video we showed you above, with the guy ripping his finger open with a bladed fidget spinner? Yeah, that video has 5.5 million views. You think people are watching in horrified silence, like kids in the 50s used to sit through car crash films in driver's ed? Not a chance. They're like, "Damn, brah! We totally gotta try that!"

How did they get so popular with adults?

Ah, well that's the more confounding mystery. It could be as simple as some of the marketing language used by fidget dealers. They promise that their spinners will "bring out that creative genius lying deep within you," and could even help you quit everything from nail-biting to smoking. But really, do we believe that millions if not billions of people are using fidget spinners for self-improvement? Probably not. They're doing it because it's become the fashion accessory of the moment.

Speaking of God, Catholic priests are using fidget spinners in their sermons. We apparently live in a world where a popular toy is used both to explain the bible and get inserted into female genitals. 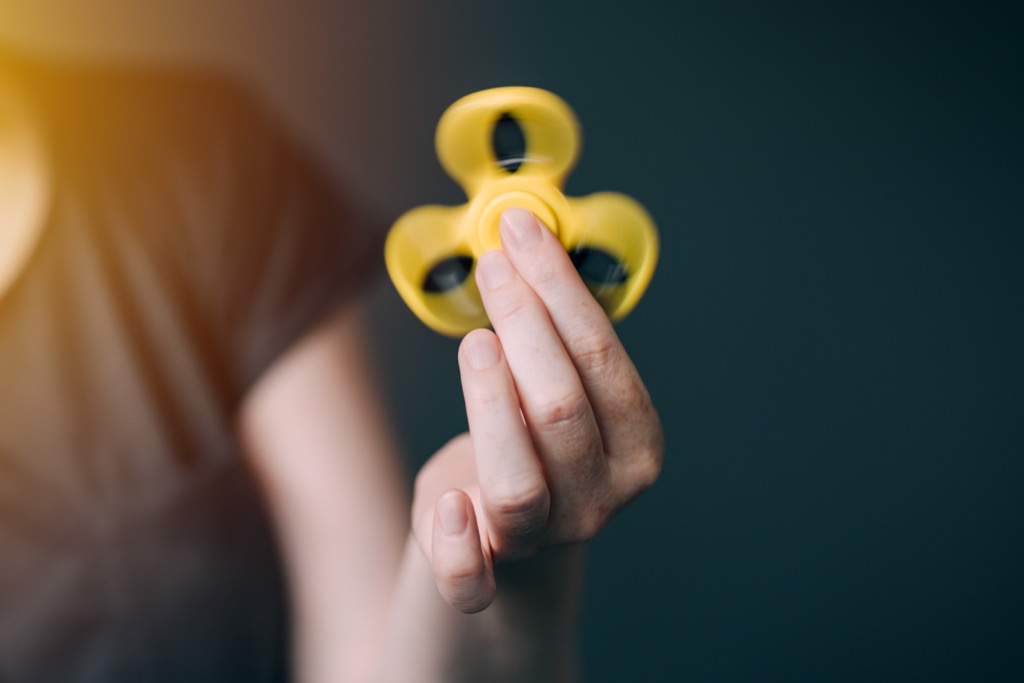 Should I get my own fidget spinner? I don't have a problem with fidgeting, I don't think, and I don't care about trends. But should I buy one anyway?

That's an interesting question. We reached out to experts in a variety of fields, and got a lot of very different opinions. Joel Best, a professor of sociology at the University of Delaware and author of Flavor of the Month: Why Smart People Fall for Fads, isn't all that impressed with the fidget spinner. "I don't think fidget spinners are especially fascinating," he told us. "I think they are a mildly amusing gadget."

But Paul Doherty, a physicist at the Exploratorium in San Francisco, thinks they're well worth your time. "I love objects that can make us aware of the science and engineering around us," he says. "Our lives are normally ruled by friction, but fidget spinners seem surprisingly frictionless. I recommend fidget spinners to allow people to experience the wonderful engineering behind the ball bearing friction reducers for spinning things."

Probably the most convincing case comes from Dr. Katherine Isbister, a professor of computational media at the University of California, Santa Cruz, and author of How Games Move Us: Emotion By Design. "First of all," she told us, "I bet if you looked at what you do now, you'd realize that already do fidget with the things on your desk or that you carry with you. A pen, your fingernails, a favorite stone. It's extremely common."

But do fidget spinners actually help? If there's legitimate doubt that they do anything meaningful for kids with short attention spans, what could they possibly do for you, an adult who can multitask without much trouble?  Isbister, who has done actual research on this, insists that there's plenty of tangible benefits. "Fidgets take advantage of the inherent engagement and pleasure we take using our hands to manipulate and sense the material world," she says. "It helps us adjust how we are feeling while we do the kind of focused desk work, like writing, that is so much a part of everyday life."

Yes, it's a fad, and people won't be talking about it forever. But that doesn't mean you shouldn't get one anyway. There was a fascinating Scientific American story a few years ago, long before anyone was aware of fidget spinners, which described the comforting rituals used by people in South Pacific islands during the 1940s.

"When residents went fishing in the turbulent, shark-infested waters beyond the coral reef, they performed specific rituals to invoke magical powers for their safety and protection," the writer explained. "When they fished in the calm waters of a lagoon, they treated the fishing trip as an ordinary event and did not perform any rituals."

Did those rituals protect them from sharks? Absolutely not. But it made them feel better. That's really why fidget spinners are so addictive. Sometimes just doing something with your hands, however meaningless and stupid, is enough to put you in a calm place. And in these weird, terrifying times, where sharks are the least of our worries, we could all use a welcome distraction.