You may want to talk to your doctor if you have heart health concerns.

When prescribed medications by our doctors, we don't normally think twice. Unfortunately, with any medication, there are often risks that may not be fully realized until years later—especially for people with certain conditions. The U.S. Food and Drug Administration (FDA) is now warning about one medication that could increase heart problems for those who take it. Read on to find out if you're taking this medication, and for more FDA guidance, The FDA Just Issued a New Warning About These OTC Pain Meds.

The FDA is warning that Xeljanz could increase someone's risk of heart problems and cancer.

The FDA issued a statement in February, warning Americans that "preliminary results from an initial safety clinical trial" on Xeljanz showed an increased risk of serious heart-related problems as a result of the medication. This medication—which is an arthritis and ulcerative colitis drug classified under the generic name tofacitinib—was compared by the administration to another type of medication called a tumor necrosis factor (TNF) inhibitor, which also treats arthritis. According to the trial findings, Xeljanz also increases someone's risk of cancer when compared to those treated with a TNF inhibitor instead. And for more medication concerns, If You're Taking Tylenol With This, Your Liver Is in Danger, Experts Say.

The FDA first approved this medication in 2012.

Xeljanz was approved by the FDA in 2012 to treat rheumatoid arthritis (RA) in patients who did not respond well to another rheumatoid arthritis medicine, methotrexate. Then, in 2017, the FDA also approved Xeljanz to treat patients with psoriatic arthritis (PsA) who also did not response well to methotrexate or other similar medications. Finally, in 2018, the FDA approved the medication to treat another condition called ulcerative colitis, which is a chronic inflammatory disease affecting the colon. "Tofacitinib works by decreasing the activity of the immune system; an overactive immune system contributes to RA, PsA, and ulcerative colitis," the FDA stated. And for more up-to-date information, sign up for our daily newsletter.ae0fcc31ae342fd3a1346ebb1f342fcb

The FDA had previously warned that this medication can increase someone's risk of blood clots and death.

In Feb. 2019 and July 2019, the FDA warned that interim trial results showed an increased risk of blood clots and death from using Xeljanz at a higher (10 milligram) twice-daily dosage. According to the medication's information page from the FDA, patients treated with Xeljanz are also at an "increased risk for developing serious infections that may lead to hospitalization or death." Reported infections that have occurred include active tuberculosis, invasive fungal infections, as well as bacterial and viral infections. And for more medication warnings, The FDA Released a New Warning About This OTC Pain Reliever.

Hundreds of thousands of Americans have been treated using Xeljanz. 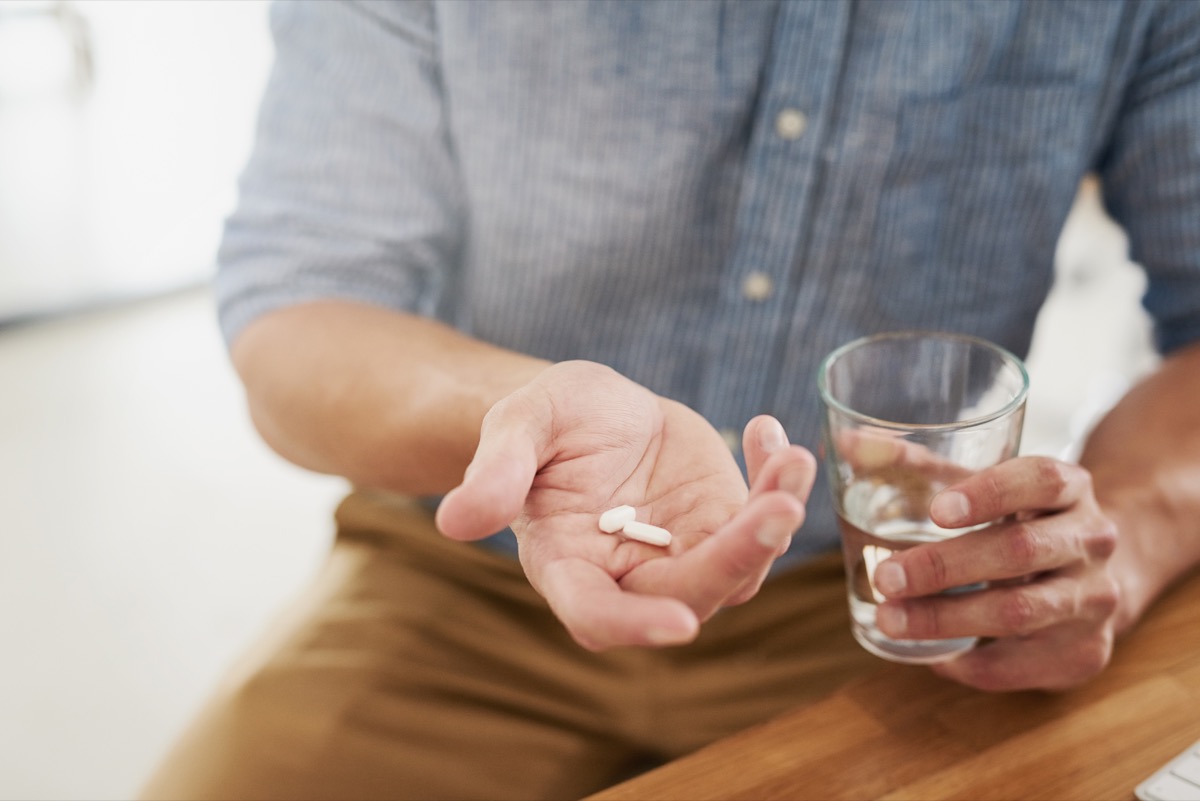 Despite the warnings, the FDA is asking that anyone prescribed Xeljanz not stop taking it on their own. "Patients should not stop taking tofacitinib without first consulting with your health care professionals, as doing so may worsen your condition," the administration said in their warning. "Talk to your health care professionals if you have any questions or concerns."

However, if you do experience sudden shortness of breath, chest pain that worsens with breathing, swelling of a leg or arm, leg pain or tenderness, or red or discolored skin in the painful or swollen leg or arm, the FDA does ask that you temporarily stop taking tofacitinib and seek emergency medical care immediately, as these may be symptoms of a blood clot. And for more on your heart health, If You See This on Your Skin, Your Heart Attack Risk Is Higher, Study Says.