Let these truths sink in.

You might have been too busy enjoying every second of watching Jack and Rose's love story unfold during Titanic to notice any mistakes the movie made. And hey — understandable. While the film got a lot of things right, there were still a handful of things it got wrong about the fateful night in 1912, and these 20 facts are some of the most notable. So read on, and be ready to correct even the most devoted fans of the film. And for more myth debunking, check out these 28 Most Enduring Myths in American History. 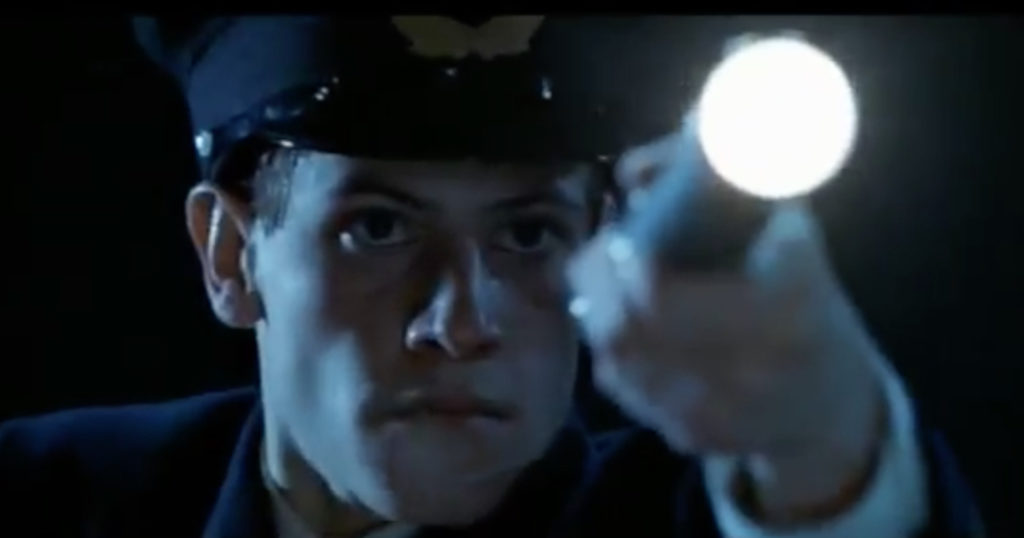 In the movie, the lifeboat officers looked for survivors using flashlights. The only problem? They didn't exist yet in 1912. This isn't necessarily a mistake, though: According to one source, director James Cameron knew it wasn't accurate historically, but needed them to make the scene work. (Good lighting is important, people!) If you think Jack wasn't worth all of the hype, then don't miss the 4 Reasons Why Rose Should Have Stayed With Cal in "Titanic".

Remember the scene where Jack is handcuffed to the pipe below deck? (How could anyone forget!) If you look closely, you'll notice the handcuff he's wearing actually has a modern welded joint—something that wouldn't have existed at the time. Oh, and for the record: You already know that "Titanic" made it on our list of The 30 Worst Movie Endings of All Time.

3
The Ocean Water Was Way Too Clear

When Rose and Jack are trying to escape the flooded lower decks, they find the key in the water. That wouldn't have been the case in real life, though: ocean water isn't that blue and clear, and according to one source, it would have been hard to spot a key with all that debris. And for more interesting facts to share at your next holiday party, check out these 30 Facts You Always Believed That Aren't True.

4
The Money Was Wrong 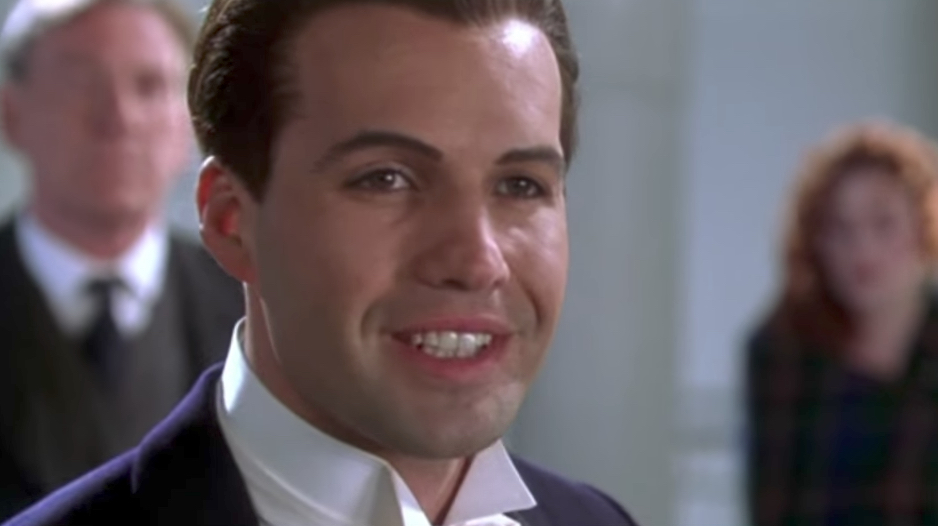 During the film, Cal sticks $20 bills into First Officer Murdoch's pocket, but the Federal Reserve Notes didn't come out until 1914, says a source — that's two years after the ship sank. And for more facts about lucre, see these 20 Crazy Facts You Never Knew About One Dollar Bills.

5
There Was No Discrimination with the Lifeboats 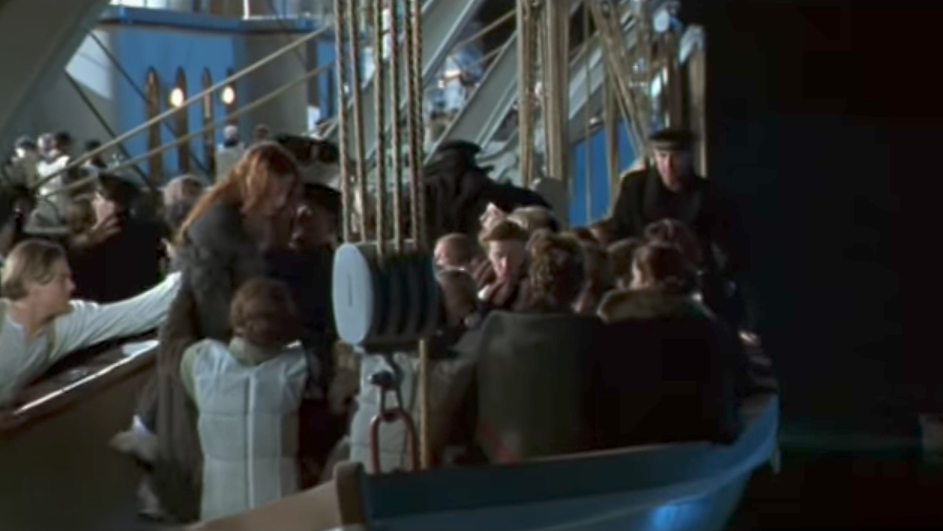 If you thought it was pretty crappy how the third class passengers were locked below deck as the first class passengers got prime seats on the lifeboats, that wasn't the case. Yes, there were gates — but not for that purpose.

"As soon as the order was given to lower the lifeboats, the order was given to open all the gates and there was no discrimination on the boat deck between either first class or third," said historian Tim Maltin. And to right more historical wrongs, check out our list of the 40 Facts You Learned in the 20th Century That Are Totally Bogus Today.

6
Will Murdoch Was a Hero in Real Life

Well, it's safe to say the Titanic did First Officer Will Murdoch is dirty. In the film, he shoots a passenger who's trying to get in the already-full lifeboat, then out of grief about his actions, shoots himself. In real life, though, he was known as a hero, helping load up 10 lifeboats and saving many people's lives. There are some eyewitnesses who say a shooting event did happen, but it wasn't ever confirmed — especially not with an officer's name.

"I took the liberty of showing him shoot somebody and then shoot himself," Cameron said. "He's a named character; he wasn't a generic officer. We don't know that he did that, but you know the storyteller in me says, 'Oh.' I start connecting the dots: he was on duty, he's carrying all this burden with him, made him an interesting character. But I was being a screenwriter. I wasn't thinking about being a historian, and I think I wasn't as sensitive about the fact that his family, his survivors might feel offended by that and they were."

When the Titanic was taking off, there were plenty of small ships around with people waving and hollering at the passengers. This didn't happen at the real departure, though: because the ship is so huge, it would have put the people on the smaller ships in danger because of the giant waves it makes. And for more fascinating knowledge, don't miss these 20 School Lessons from the 20th Century That Are Considered Offensive Today.

8
Passengers Would Have Died Much Sooner

One of the saddest parts of the movie is seeing how many people died while trying to survive in the freezing-cold water, Jack included. According to one source, the water wasn't the only thing that would have caused hypothermia, though: that would have set in much sooner, even while they were evacuating onto the decks. That means many probably didn't even make it off the ship alive.

9
Rose Would Have Definitely Died

In line with how cold it was, there's a good chance Rose would have also died in real life due to her only wearing a coat and thin dress while lying on the door in the water. But since seeing her and Jack both freeze to death would have made the movie a lot less fun to watch, Cameron definitely made the right choice. Don't love the ending to the movie? Then don't miss this chance to Watch Kate Winslet and Stephen Colbert Fix the Ending to "Titanic". 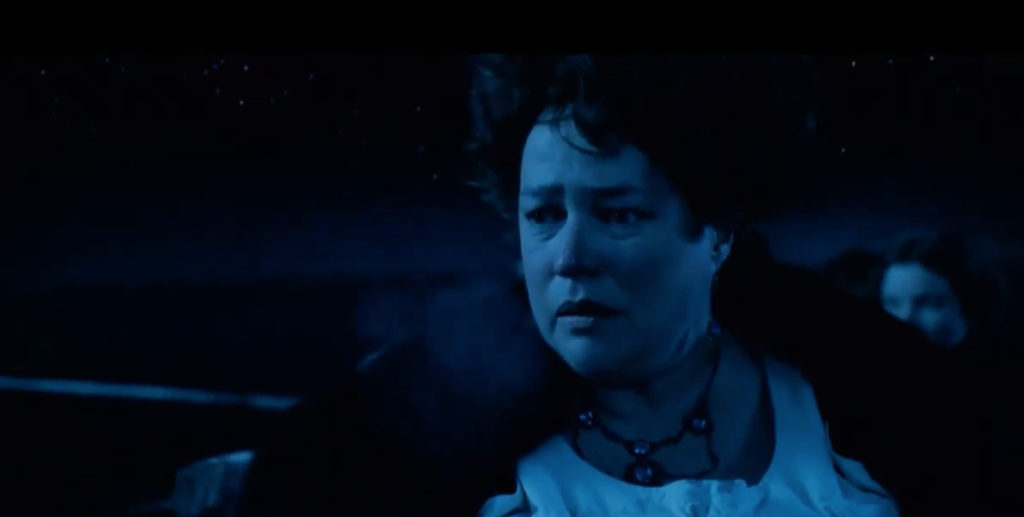 You've gotta love the outspoken and hilarious Margaret Brown. What's interesting, though, is that she was never actually referred to as "Molly" like she was in the movie: that nickname was given to her after her death when people started calling her "the unsinkable Molly Brown."

11
Jack's Cigarettes Were Before Their Time 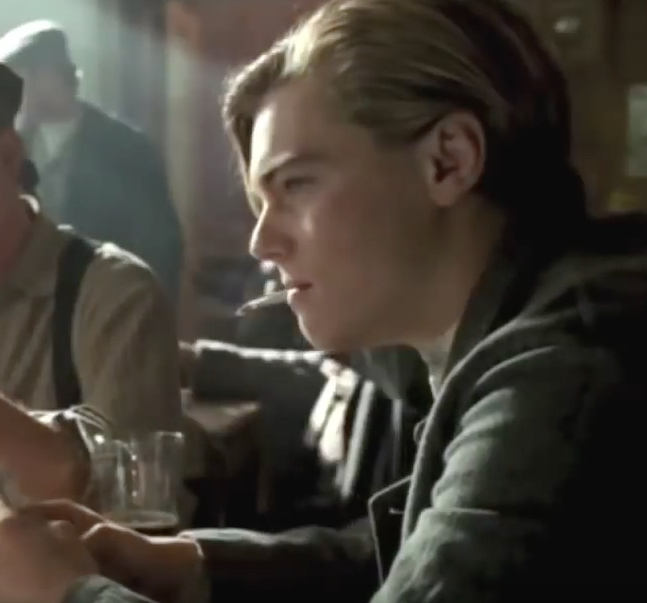 In the movie, Jack is smoking a cigarette on the stern deck before Rose is considering jumping. It might not seem out of place, but he's actually using a mass-produced filter cigarette—something that didn't exist in 1912.

12
Rose Quoted a Theory That Wasn't Published Yet

During the film, Rose said "Do you know of Dr. Freud? His ideas with male preoccupation with size might be of particular interest to you, Mr. Ismay," quoting a Sigmund Freud theory that didn't exist yet. In fact, it wasn't published until years later.

13
The Ship Sinking Was More Dramatic in the Film

The scene where the Titanic splits in half in the film is one no one will ever forget. And although that fact is proven historically correct, the stern bobbing vertically nearly 90 degrees in the air before falling into the water was overdone for the film. "There was actually probably a moment when it was standing quite proud of the water, but it wasn't quite as dramatic and as static as we showed in the film," Cameron said.

14
No One Claimed the Ship Was Unsinkable

In the film, everyone knows of the Titanic as the ship that's "unsinkable." In real life, that wasn't the case. In fact, the White Star Line never made any claims at all that its ship was unsinkable.

"It is not true that everyone thought this. It's a retrospective myth, and it makes a better story," said Richard Howells, Ph.D. "If a man in his pride builds an unsinkable ship like Prometheus stealing the fire from the gods… it makes perfect mythical sense that God would be so angry at such an affront that he would sink the ship on its maiden outing."

You probably remember seeing the band still playing on the deck as the ship is sinking in order to lift passengers' spirits, but the last song they played before it went down might not have been "Nearer, My God, To Thee."

"The passenger that recalled that particular hymn being played was lucky to get away quite some time before the ship sank," Simon McCallum, PhD, said. "We will never really know as all seven musicians perished—but it's poetic license. 'Nearer, My God, To Thee' is such an evocative hymn that works as a romantic image in film."

16
Jack Wouldn't Have Been Able to Join Rose for Dinner—or Anything, Really

One of the best parts of the Titanic is the dinner party scene. The funny thing is that would have never been possible on the real ship because third-class passengers couldn't be in the first class section of the boat, and vice versa. Sad, but true.

17
Rose and Jack Had It Too Easy Escaping the Ship

In the film, Rose and Jack spent a good 30 minutes running through the ice-cold water on the ship generally unphased as they were trying their hardest to survive. Unfortunately, those in the same situation in real life died within 15 to 30 minutes due to how cold the water was. And for more fun facts, check out these 100 Awesome Facts About Everything.

18
Will Dates His Art Incorrectly 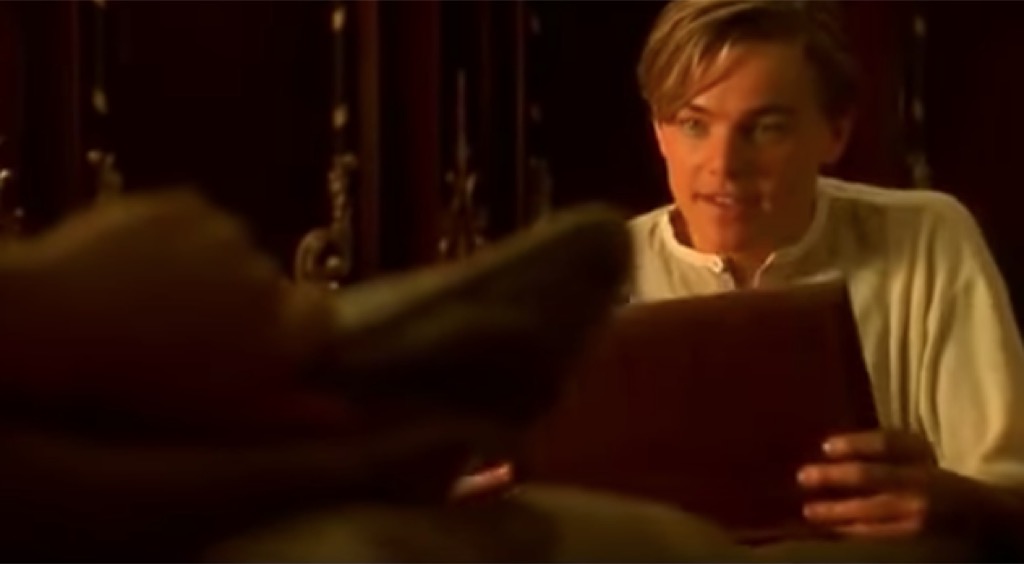 19
The "I'm Flying" Scene Would Have Been a Lot Colder 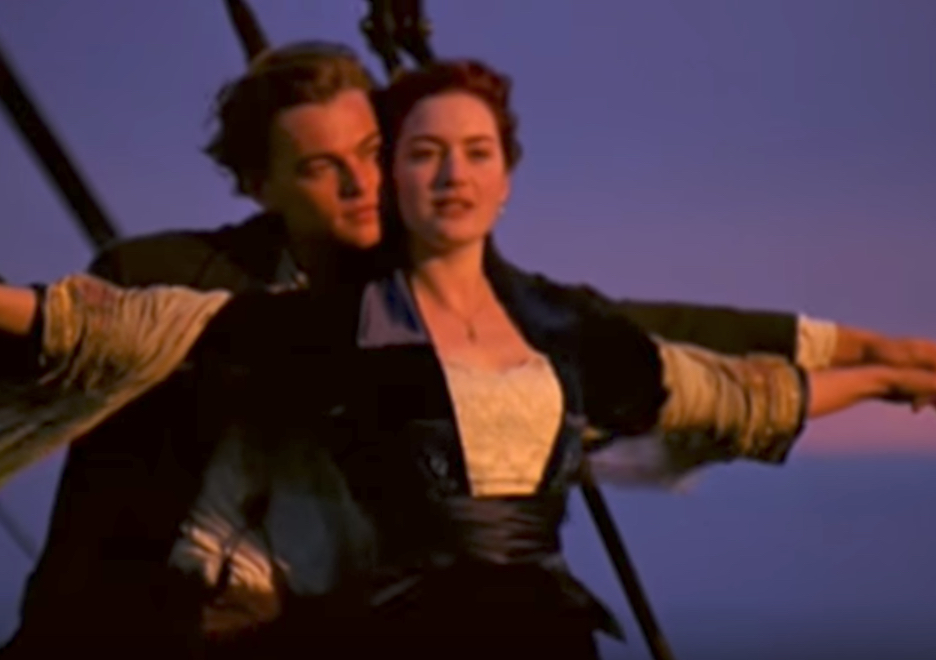 Unfortunately for these lovebirds, one of the most notable scenes in the film — when Jack is holding Rose at the bow of the ship — probably wouldn't have happened in real life. It could have, but because of a temperature drop on April 14, 1912, they would have at least had visible breaths, says a source. 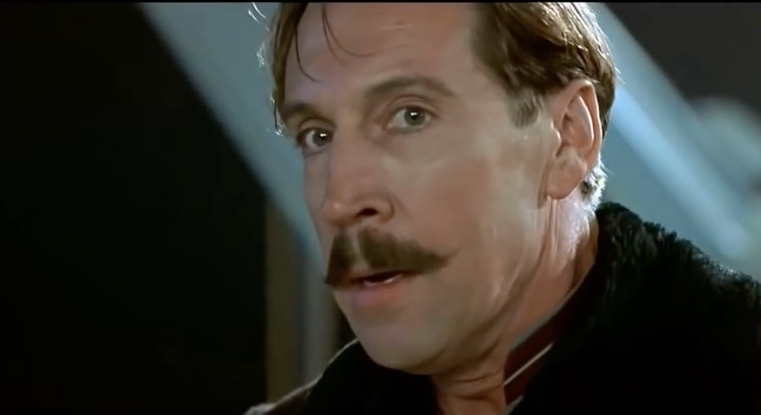 In the movie, J. Bruce Ismay—the chairman and managing director of the White Star Line—survived the wreck by dressing like a woman. Since, you know, women and children got first dibs. In real life, he did survive by snagging a place on a lifeboat—just as himself. And if you can't get enough movie trivia, be sure not to miss our list of The 30 Funniest Movies of All Time.