If You Eat Out This Often, You're Cutting Years Off Your Life, Study Says

Eating "away-from-home" meals can have disastrous effects on your health.

Whether it's because you're craving a specific dish or you don't feel like cooking, being able to eat out can be as convenient as it is satisfying. Unfortunately, overdoing it on restaurants could be having a major negative impact on your health. According to a new study, you're likely cutting years off your life if you eat out two times a day or more. Read on to see why cooking at home might be worth the effort, and for more on keeping other habits healthy, check out If You Drink This Much Coffee a Day, Your Heart's in Danger, Study Finds.

The results come after a 15-year-long study.

The study, which was recently published in the Journal of the Academy of Nutrition and Dietetics, assessed the eating habits of 35,084 adults aged 20 and older with face-to-face interviews from 1999 to 2014. By the time interviews had concluded in 2015, results showed that 2,781 participants had died of heart disease and 638 had died of cancer.

Eating out excessively can significantly increase the risk of early death.

After adjusting for factors such as age, sex, and body mass index, analysis of the data found that compared with study subjects that ate meals prepared away from home less than once a week, those that ate out or ordered takeout an average of twice a day or more were 95 percent more likely to suffer an early death.

"Frequent consumption of meals prepared away from home is significantly associated with increased risk of all-cause mortality," the study authors concluded. "The association of eating meals prepared away from home with cardiovascular mortality and cancer mortality warrants additional investigation." And for more on signs that your health may be at risk, check out If You Can't Do This in 90 Seconds, Your Heart Is in Danger, Study Says.

Other studies say the health quality of restaurant meals could be to blame.

But other recent studies have found that even eating out occasionally can make it difficult to keep your health in mind. According to a study published in The Journal of Nutrition in January of 2020, researchers found that meals at restaurants ranging from full-service sitdown establishments to grab-and-go fast food were more often unhealthy than not, discovering that less than .1 percent of the food served was of ideal nutritional quality.ae0fcc31ae342fd3a1346ebb1f342fcb

"Our findings show dining out is a recipe for unhealthy eating most of the time," Dariush Mozaffarian, MD, PhD, senior author of the study and dean of the Friedman School at Tufts University, said in a statement. "It should be a priority to improve the nutritional quality of both full-service and fast-food restaurant meals, while reducing disparities so that all Americans can enjoy the pleasure and convenience of a meal out that is also good for them."

Diners and restaurants share the blame for unhealthy eating. 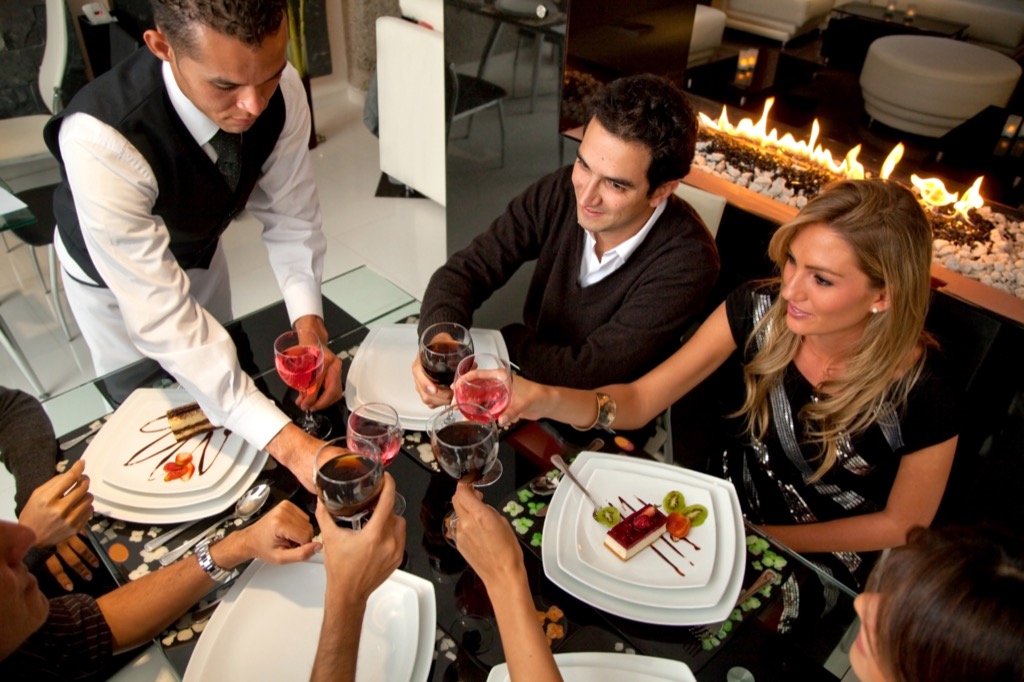 However, the Tufts University study also found that both sides of the order counter need more awareness to make the current situation better. "At restaurants, two forces are at play: what's available on the menu, and what Americans are actually selecting," Mozaffarian said. "Efforts from the restaurant industry, consumers, advocacy groups, and governments should focus on both these areas."

But what exactly can be changed? "We found the largest opportunities for enhancing nutritional quality would be adding more whole grains, nuts and legumes, fish, and fruits and vegetables to meals while reducing salt," Junxiu Liu, PhD, first author and a postdoctoral scholar at the Friedman School, said in the statement. And for more on warning signs your body could be giving you, check out If You Have This Issue With Your Eyes, Your Heart Disease Risk Is High.