She first started noticing changes to how she was able to handle her job.

The first signs of age-related illness such as cognitive decline can be challenging to spot, unlike cardiovascular disease or other primarily physical ailments such as diabetes. But the problem can be particularly challenging to identify when it starts progressing at a younger age, especially as it can often get mistaken for other issues. Unfortunately, such was the case for one 59-year-old woman in the U.K. who was recently diagnosed with dementia after doctors first dismissed her symptoms as stress. Read on to see how she first noticed the condition and what she's doing about it now.

READ THIS NEXT: These 5 Popular Medications Have Been Linked With Alzheimer's, Research Shows.

A woman diagnosed with dementia in her 50s says doctors first dismissed her symptoms as stress.

The pressures of everyday life can sometimes take a toll on our mental clarity and well-being. But for Jude Thorp, a 59-year-old mother of two living in Oxford, England, it became clear that something was seriously wrong when she first started noticing a change in her abilities while on the job, The Independent reports.

After years of experience in a career in theater, Thorp realized she had more difficulty completing simple tasks or focusing on her work. She soon noticed she was also repeating questions, forgetting important conversations, feeling fatigued, and having difficulty coming up with the right words during conversations.

Despite the changes, Thorp didn't seek medical attention until her wife convinced her to book an appointment with a specialist in November 2016. But upon examination, she said her doctors quickly wrote her symptoms off as the result of stress and said "she had too much going on" in her life.

"Imagine, you know, just being told that you're a bit daft," she told The Independent, describing it as a "humiliating" experience. "That was my first time going to the doctors for something serious in my life, and it was horrendous, and afterward they said there's nothing wrong with me."

Despite her first experiences, Thorp says she continued to visit different specialists over the following years. But it wasn't until doctors performed a lumbar puncture and she underwent an MRI scan that she finally received a diagnosis of early-onset dementia caused by Alzheimer's disease in January 2021, The Independent reports.

According to the Mayo Clinic, young-onset dementia is the term used to describe anyone under the age of 65 who begins showing signs of the condition. In the case of Alzheimer's, the health organization says that five to six percent of people with the disease develop it in middle age—meaning that there could be anywhere between 300,000 to 360,000 people in the U.S. living with the condition.

Doctors say early-onset dementia has multiple causes but can be difficult to spot or diagnose.

Early-onset dementia can be caused by a number of conditions, including frontotemporal dementia (FTD), vascular dementia, or Lewy body dementia, according to the Alzheimer's Society. However, the foundation says atypical Alzheimer's disease is the most likely cause for anyone who begins experiencing their first symptoms between the ages of 30 and 60.

Different forms of the condition can manifest with varying sets of signs. They include posterior cortical atrophy (PCA), which can make it difficult to interpret visual information such as reading a sentence or gauging distances; logopenic aphasia, which can make it hard to find the right words while speaking or taking long pauses mid-sentence; and dysexecutive Alzheimer's disease that can make planning more difficult and lead to inappropriate behavior in social situations, according to the Alzheimer's Society.

Unfortunately, it can be difficult to identify these problems as early-onset dementia in middle-aged people. "Complaints about brain fog in young patients are very common and are mostly benign," David S. Knopman, MD, a neurologist at the Mayo Clinic in Rochester, Minnesota, told The New York Times in an interview. "It's hard to know when they're not attributable to stress, depression, or anxiety or the result of normal aging. Even neurologists infrequently see patients with young-onset dementia."

Getting the correct diagnosis can help you treat and manage early-onset dementia. 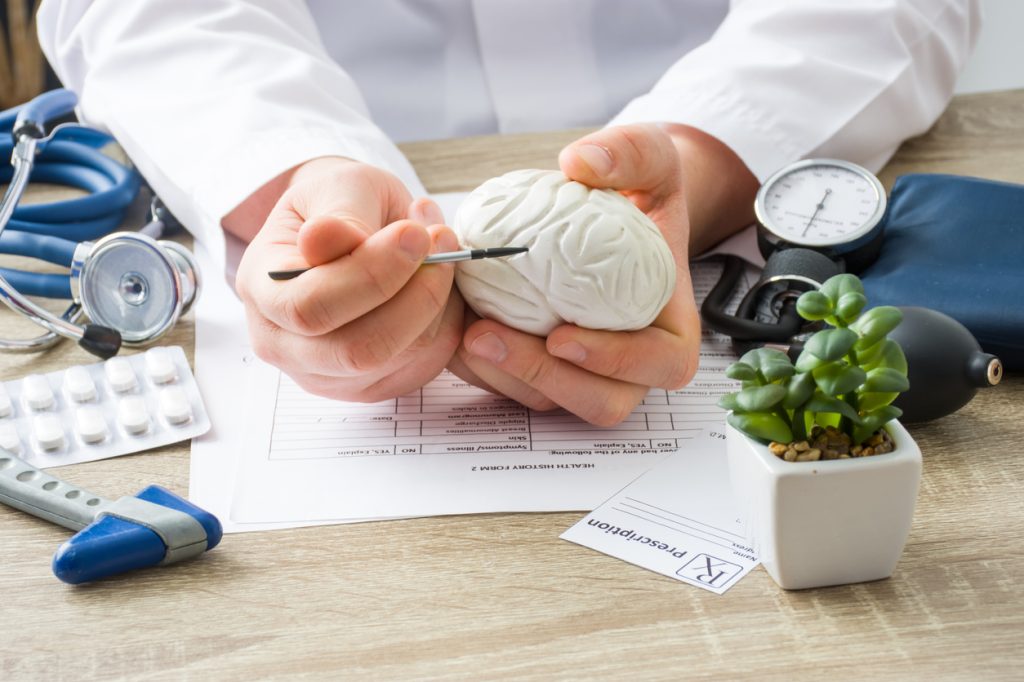 Despite the challenges in identifying it, correctly diagnosing early-onset dementia can be absolutely vital. Besides being able to rule out any other treatable causes for the symptoms, knowing what they're facing can help someone get the appropriate care and planning started so they can focus on improving their quality of life, according to the Mayo Clinic.

For Thorp, the diagnosis first felt like a heavy burden—especially when she had to break the news to her two young daughters. But she said the process ultimately brought her to a better place. "You have to mourn, you have to be cross or angry or upset. I mean, that's part of grieving for something, isn't it? But for me, I'm so lucky that I've got this diagnosis because I can still live well with it," she told The Independent.

Since identifying her dementia, Thorp has been put in touch with support groups and found new fulfillment in charity work and outreach about the disease. "I think accepting a diagnosis of anything allows you to blossom in a way. And I think it's really important that life can be rich," she said. "I think it's about living your best life and doing what you can."

Zachary Mack
Zach is a freelance writer specializing in beer, wine, food, spirits, and travel. He is based in Manhattan. Read more
Filed Under
Brain Health • News • Symptoms • Your Brain
Read This Next
Latest News
Read This Next